Accessibility links
Is There A 'War On Police'? The Statistics Say No The ambush killing of a sheriff's deputy in Texas has intensified concern in some circles that criticism of police has led to an increase in officer deaths. But the data don't back up that fear. 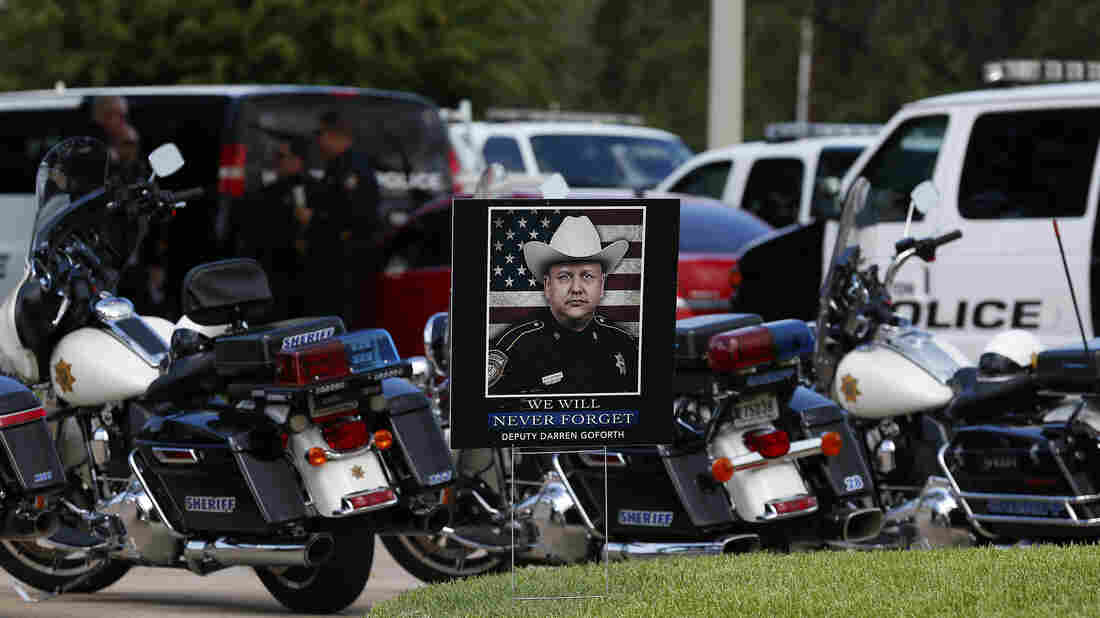 The funeral for Harris County Sheriff Deputy Darren Goforth was held Sept. 4 in Houston. After Goforth was fatally shot at a gas station on Aug. 29, some spoke about a "war on cops." But while 2014 did see more officer deaths than 2013, one expert says that's not a sign of a statistically significant spike. Aaron M. Sprecher/Getty Images hide caption 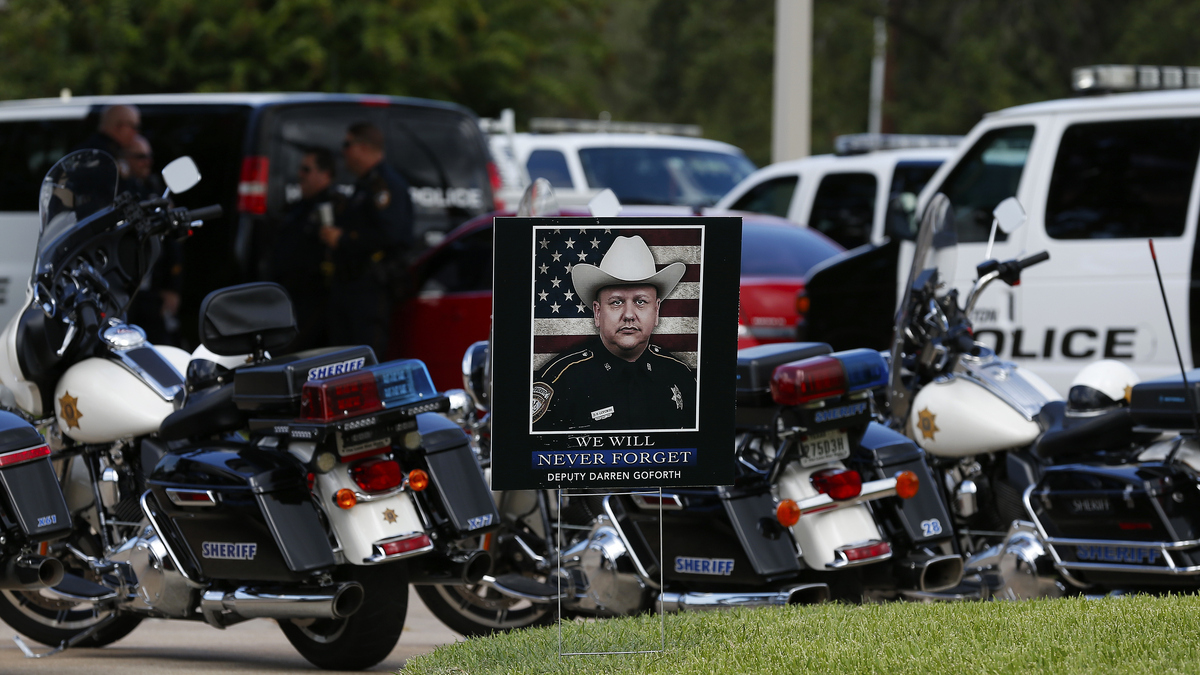 The funeral for Harris County Sheriff Deputy Darren Goforth was held Sept. 4 in Houston. After Goforth was fatally shot at a gas station on Aug. 29, some spoke about a "war on cops." But while 2014 did see more officer deaths than 2013, one expert says that's not a sign of a statistically significant spike.

The ambush-style murder of Sheriff Deputy Darren Goforth at a gas station in suburban Houston on Aug. 29 has added new urgency to warnings about a growing "war on cops" in America. After the arrest of the suspect, an African-American man named Shannon J. Miles, the local district attorney called for more public support for law enforcement.

"It is time for the silent majority in this country to support law enforcement," said Devon Anderson, the Harris County DA. "There are a few bad apples in every profession. That does not mean there should be open warfare declared on law enforcement."

The notion of growing "warfare" against police stems in part from a statistical jump in the number of law officers murdered — "feloniously killed," in the jargon of the FBI's numbers.

In 2014, the year of the Ferguson protests and increased media attention on police misconduct, 51 officers were killed nationwide. That was a jump from the 27 killed in 2013 and many took it as a sign of greater danger for police.

Seth Stoughton, a former police officer and an assistant law professor at the University of South Carolina, calls that interpretation "nonsense."

"It's misleading to compare one year to another year," he says. 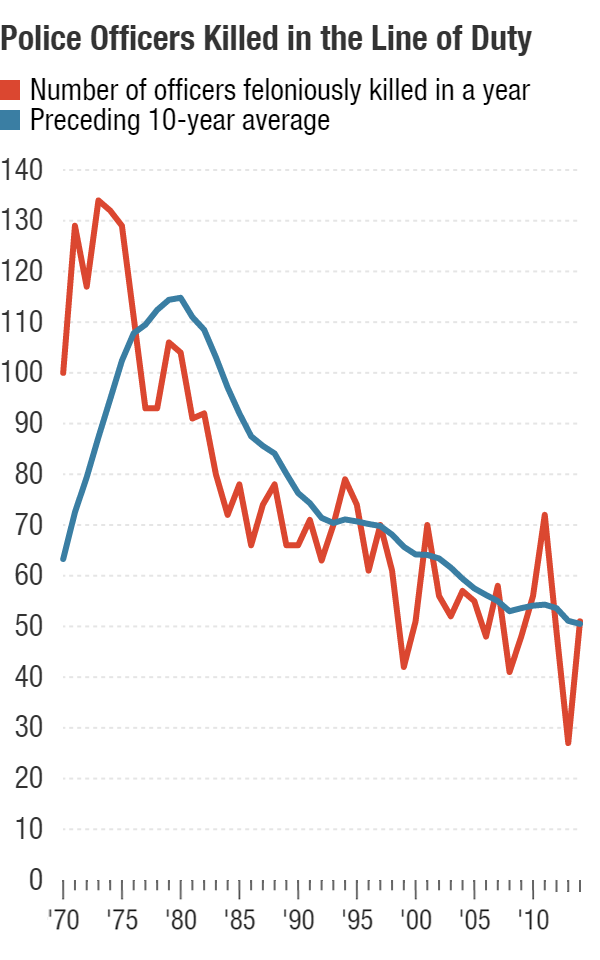 While the number of police officers killed on duty nearly doubled from 2013 to 2014, the increase is deceptive, says Seth Stoughton: 2013 had unusually few deaths. 2014 was comparable to other recent years and to the 10-year average. Note: The FBI uses the term "felonious deaths" for the deaths of officers from injuries incurred in the line of duty during criminal incidents. Source: Seth Stoughton's analysis of the FBI's LEOKA data, consolidated by the Sourcebook of Criminal Justice Statistics. Credit: Camila Domonoske/NPR hide caption

Stoughton has been collecting and analyzing these data going back decades. He says 2014 looked bad in comparison with 2013 mainly because 2013 was so good.

In fact, in the larger scheme of things, 2014 looks pretty normal. The number of murders of police was about the same as 2012, and actually a lot lower than 2011.

The long-term trend is even more encouraging: On average, only about half as many police are murdered every year now, as compared with the 1970s. Stoughton says some of that improvement is probably due to better training, better gear and radically improved trauma care for cops who are shot.

But he says the numbers suggest officers are also facing fewer attacks: The number of assaults on police has also fallen, though not as sharply.

Stoughton says he's not saying police work isn't dangerous — it certainly is. And he also admits we may be seeing a few more ambush killings — cops attacked just because they're cops.

But it's hard to isolate motives in these numbers, and any uptick is probably in the single digits.

"When we're talking about 780,000 state and local police officers who are interacting with people on 67 million occasions every year, the increase from five to eight, or five to 10 — statistically, it doesn't look significant," he says.

But statistical analysis is cold comfort to police officers after a colleague has been ambushed. Some officers have been understandably shaken.

In a video that made the rounds soon after the Texas deputy was killed, a Miami officer named Lydia Marquez records herself in her car.

"When I kiss my children in the morning before I go to work, I don't know if I'm going to be coming back at the end of the day," she says. "Especially nowadays."

Marquez ends her video defiantly, with the phrase that's become a rallying cry for many cops since Ferguson: "All lives matter. Everyone's life matters."

I think that this 'war on cops' rhetoric is just another way to protect police from accountability.

"All lives matter" may sound noble, but activists hear it as code for something else.

"I think that this 'war on cops' rhetoric is just another way to protect police from accountability," she says. "What they're facing is not violence; it's accountability."

Soon after Goforth's murder, Texas Lt. Gov. Dan Patrick condemned what he called the "negative attitude" toward police. Accused of using the killing to shut down legitimate criticism of police, Patrick took aim at the media. On the public radio show Texas Standard, the host tried to ask him about all the recent videos showing police misconduct.

"Your type of interview has to stop," Patrick said.

"Yes, there are people in every profession who cross the line and should be fired," he continued. "Quit focusing on that small percentage of those in law enforcement who have made a mistake."

Edward Conlon, a retired New York police detective who writes about police work, says his former colleagues feel unfairly judged by the mistakes of a few. He says they haven't seen evidence of a "war on cops," but they do feel embattled when it comes to public opinion.

"The notion that there is an epidemic of violence by police is just a really hard thing to swallow," he says.

And he sees a parallel here. He thinks both sides are guilty of drawing dramatic conclusions from isolated cases.

But there does seem to be at least one kind of war going on: a war of perceptions, driven by competing feelings of grievance.