Accessibility links
For Arab Artists With Something To Say, This Sheikh Is A Loudspeaker Media personality and art collector Sultan Sooud Al-Qassemi spends a fortune on artworks by living, Arab artists; then he shows them to as many people as possible.

Wealthy art collectors often spend millions of dollars on trophy pieces by European masters, then keep them hidden from view. Not Sheikh Sultan Sooud Al-Qassemi: He spends his fortune on artworks by living, Arab artists, then shows them to as many people as possible.

Qassemi is a bit of a paradox. He's a member of an Arab royal family, but he recently showed up at NPR's New York bureau by himself and casually dressed, looking more like a grad student than a sheikh. While clicking through the artworks on his Barjeel Art Foundation's website, he emphasizes his collection's diversity. "These [artists] are from all over the Arab world: Syrian, Iraqi, Kuwaiti, Egyptian, Jordanian, from the [United Arab Emirates] and Lebanon," he says.

I don't buy artworks that I think are pretty and aesthetically appealing. But I buy art that is politically meaningful.

Qassemi's collection consists of more than a thousand works, but he's perhaps better known as a media personality than an art collector. A regular commentator on the Middle East, he's been interviewed about finance on Bloomberg TV, and unemployment on CNN. He's written for The New York Times and Foreign Policy, and during the Arab Spring, he tweeted constantly, translating Arabic speeches and reports into English. Time magazine wrote "to the extent that the revolution was tweeted, much of it came through the feed of Sultan Al-Qassemi."

And when it comes to the sheikh's art collection, he has an almost activist sensibility. "I don't buy artworks that I think are pretty and aesthetically appealing," he says. "But I buy art that is politically meaningful." 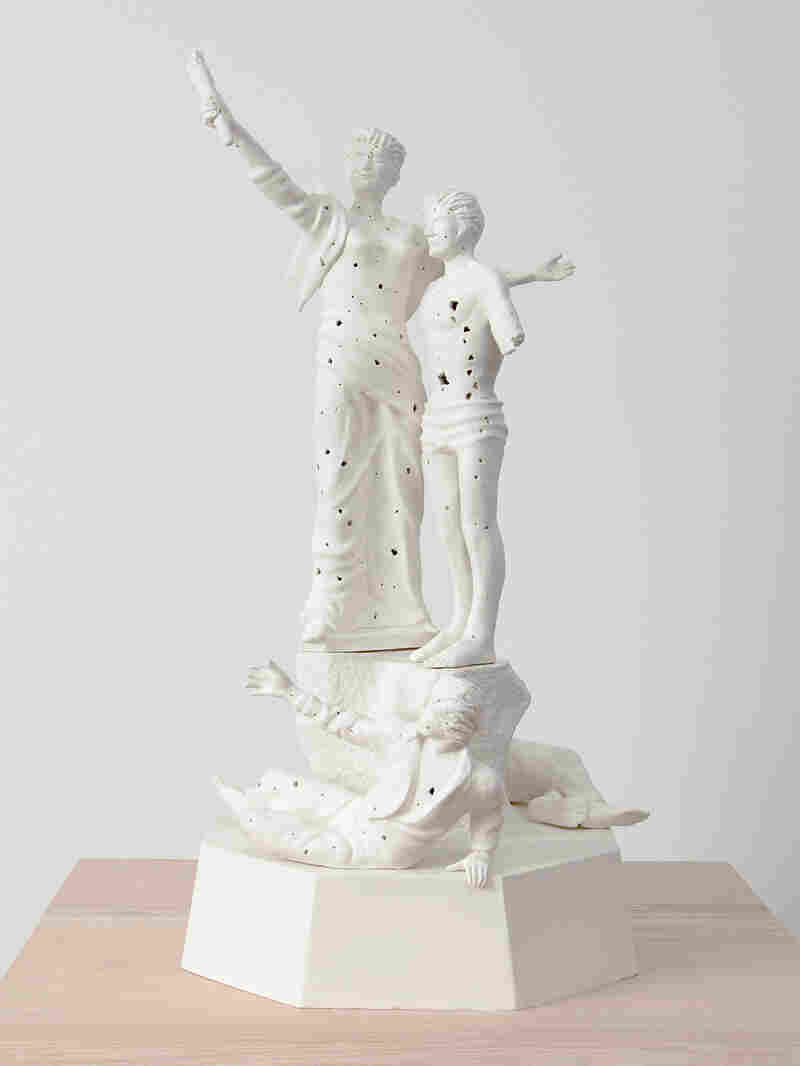 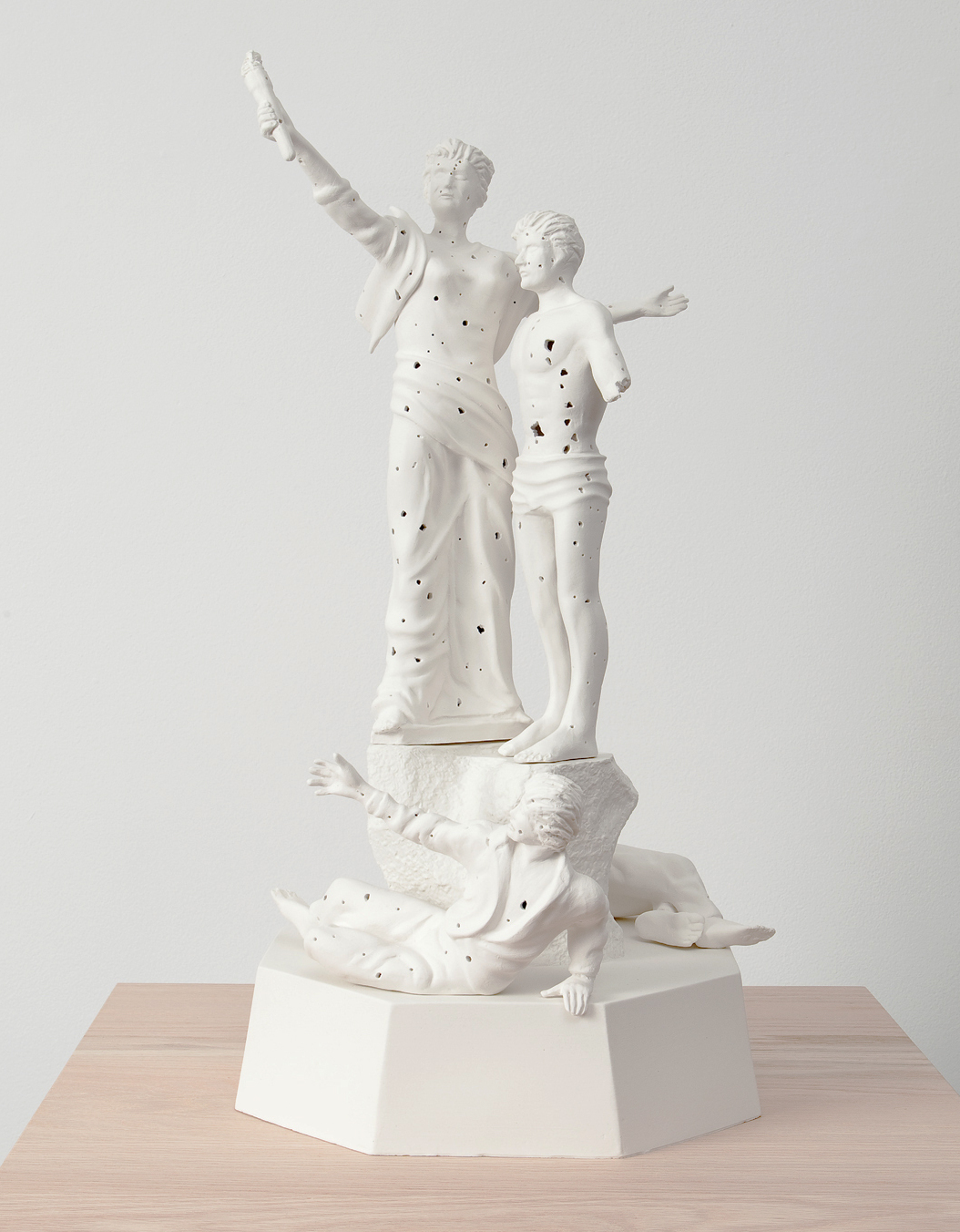 In other words, he buys art like Witness, a porcelain sculpture by the Palestinian-British artist Mona Hatoum. Qassemi says it's a miniature replica of a famous statue in downtown Beirut that is riddled with bullet holes from the long, Lebanese civil war. "And Mona Hatoum created this work wanting to capture forever the destruction that this civil war had on the arts and culture, but also the psyche of the Lebanese," he says.

Another work in Qassemi's collection is Memorial, a haunting black and white video installation by Iraqi artist Adel Abidin, now on display at the Aga Khan Museum in Toronto as part of the exhibition "Home Ground: Contemporary Art From The Barjeel Art Foundation." With a kind of magic realism, Abidin uses cows as a metaphor for human suffering during the 1991 American invasion of Iraq. It shows a cow separated from the rest of its herd by a Baghdad bridge that's been bombed. At one point, the cow takes a running leap at the bridge and tries to jump to the other side, but doesn't make it.

Abidin, who was a teenager in Baghdad in 1991, says he and his family crossed that bridge over the Tigris River almost every week to visit his grandparents. When he heard it had been bombed, he rode on his bike to see it. On the fallen part of the bridge, there was a dead cow. He has no idea how it got there.

"I'd never seen a cow in the center of Baghdad — it's a very urban city, you don't really see cows in it," he says. "So I was thinking, 'Would the Americans [drop] the cow? How did the cow end up there?' And this stayed in my mind until 2009. Then I came up with a scenario of the death of this cow."

Abidin says the image of a cow risking its life to cross the bridge is meant to communicate human social need, and "that we always need to be with others. ... We don't function alone." 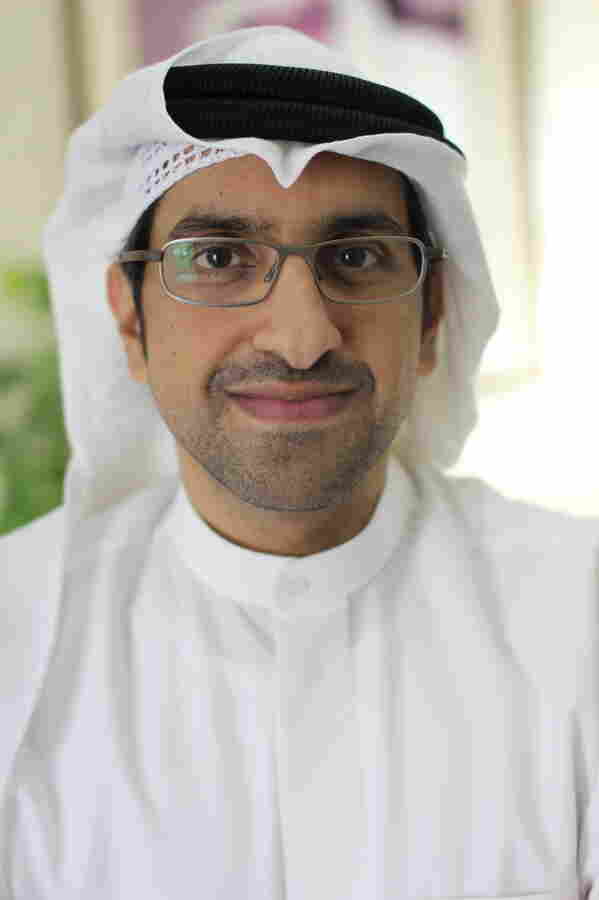 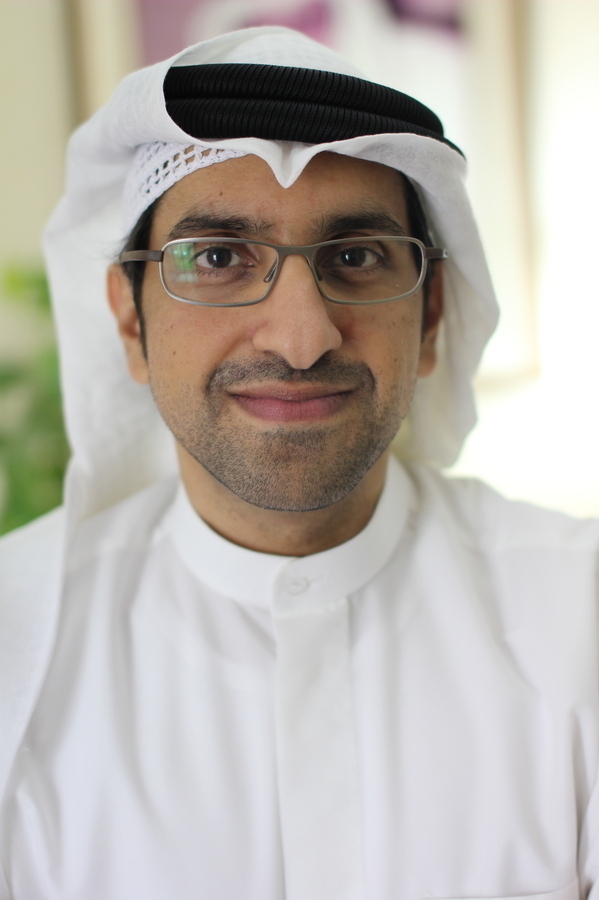 Nada Shabout is director of the University of North Texas' Contemporary Arab and Muslim Cultural Studies Institute. She says that with so much of the Arab world "in flames," Arab artists need to get their messages out — and they need patrons like Qassemi to help them do that. "He's been a very generous collector in terms of opening up his collection to graduate students, to scholars, so we can, in fact, engage and write these, you know, different narratives," she says.

Adel Abidin agrees. And he says Qassemi does his homework. "I don't think he aims for the easy stuff, you know. He's a good researcher, actually; he digs out for information. It's not like what he hears, he says, you know — he has to check it out."

Qassemi wants other people to check it out, too. In addition to Toronto, London's Whitechapel Gallery is also hosting a show from his Barjeel Art Foundation.

Nada Shabout says it certainly helps that Qassemi is a wealthy member of one of the ruling families of the United Arab Emirates. But, she says, you'd never learn that from him. "He never really puts himself in the family. And it's [rare] that you would find an article where he is referred to as 'sheikh,' which, you know, is the equivalent of emir, prince. So he likes to sort of think of himself as an ordinary man even though we know he's not," she says with a laugh.

Class aside, Qassemi says he's driven to share artworks that are provocative and emotional responses to difficult issues. He believes they help counter the brutal images of destroyed neighborhoods and beheadings so prevalent in the news. "We are taking the narrative away from these extremists," he says. "We are building bridges of communication with the western world and the eastern world. And I think that art is a global language, much like music, and that people will identify with artwork even if they don't understand the history of the Middle East. So it's very, very important."

Making it possible for these Arab artists to keep working, and for the rest of the world to learn their stories is, for Qassemi, what being an art collector is all about.