Accessibility links
So You're Going To Meet The Pope ... A Primer On The Pontiff What do you wear? What do you do? And if you get more than a few moments to speak straight into the pontiff's ear, what do you say?

So You're Going To Meet The Pope ... A Primer On The Pontiff

So You're Going To Meet The Pope ... A Primer On The Pontiff 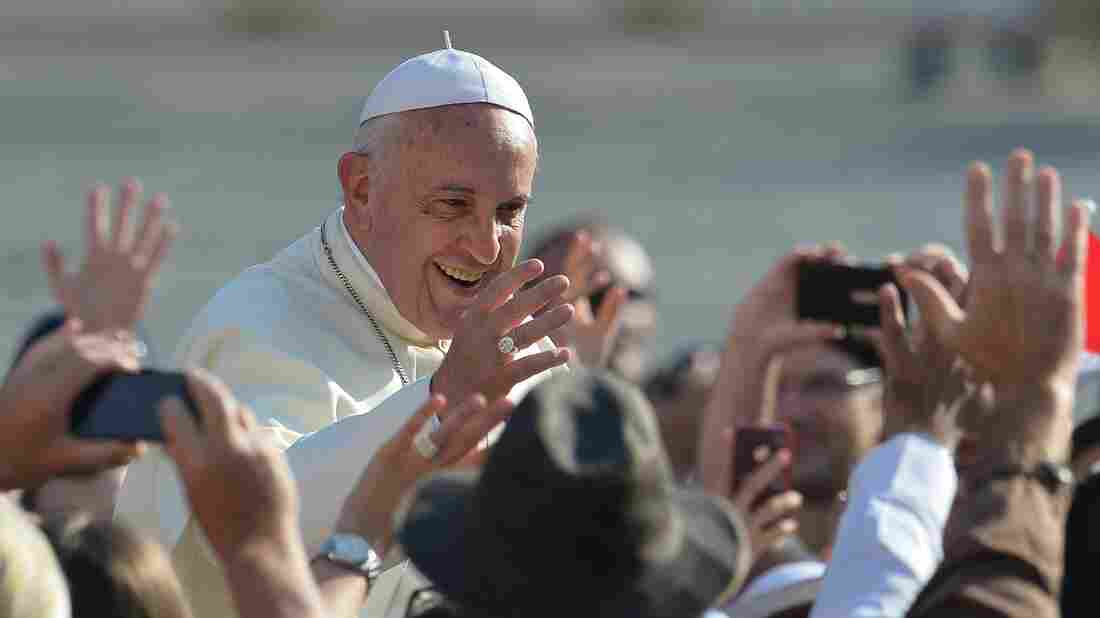 Face-to-face with Pope Francis: What do you say? Here, the pope arrives for his general audience at St. Peter's Square on Oct. 1, 2014, at the Vatican. He arrives in the U.S. on Tuesday. Vincenzo Pinto/AFP/Getty Images hide caption 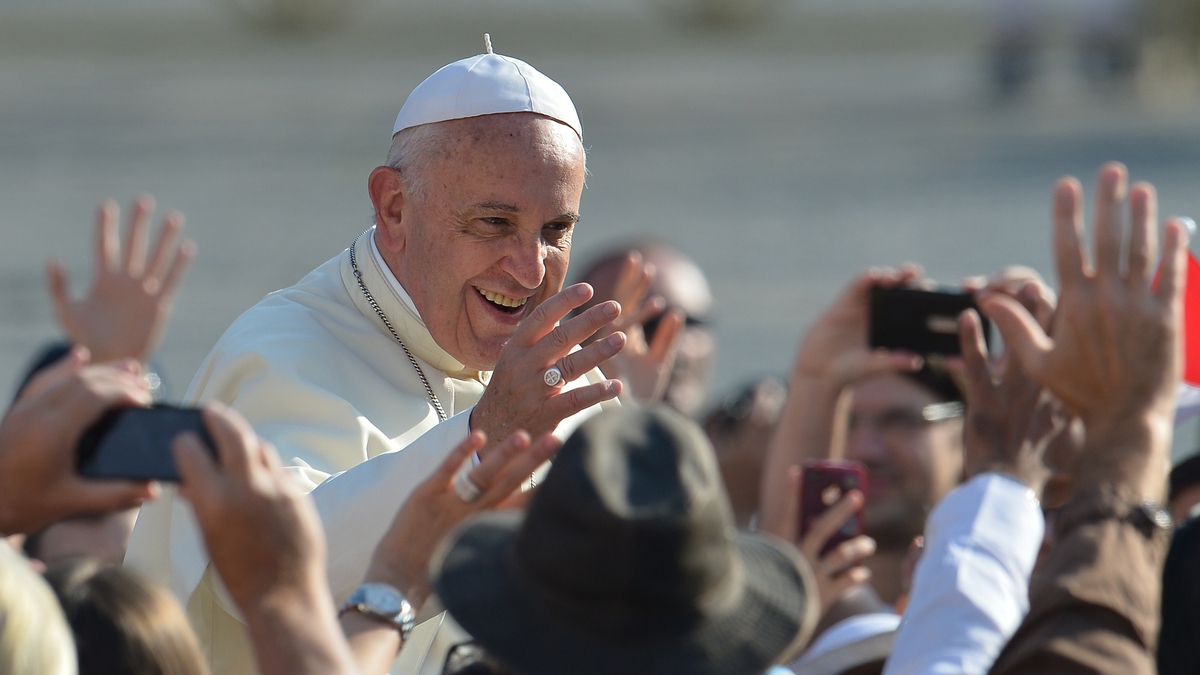 Face-to-face with Pope Francis: What do you say? Here, the pope arrives for his general audience at St. Peter's Square on Oct. 1, 2014, at the Vatican. He arrives in the U.S. on Tuesday.

You probably won't be one of the few souls to meet Pope Francis on his visit to the U.S. next week. But hey, it could happen, and if it does, don't you want to be ready?

Here's a primer on what you need to know so, at the very least, you'll be well-prepared for small talk about him, if not to him.

The pope is never introduced. He literally is a man who needs no introduction. (You, of course, ought to be introduced by somebody.)

When you speak to him, you address him as Your Holiness. (If you happen to find yourself in a sea of high-level Catholic clergy and are wondering what to call everyone, cardinals are Your Eminence, and bishops and archbishops are Your Excellency.)

As for his symbolic fisherman's ring, which some kneel and kiss as a sign of respect: If you're not Catholic, there's no expectation whatsoever that you kiss the ring. And even if you are Catholic, it's not required: Vice President Biden dispensed with the practice two years ago, giving the pope a handshake instead.

That's totally acceptable — especially with Pope Francis, who tends not to stand on ceremony. He has a habit of embracing people, bowing to them — or, when cardinals bend to kiss his ring, bending to kiss theirs back.

Want to practice your language skills? Pope Francis is trilingual and then some: He speaks fluent Italian, German and Spanish, plus a bit of English, French and Portuguese, according to The Telegraph.

He also knows his way around Latin, of course — it comes with the job.

Not impressed yet? He also studied chemistry and worked as a chemist: So in addition to being able to greet you in six languages and celebrate the Mass in a seventh, he could also school most of us on science. 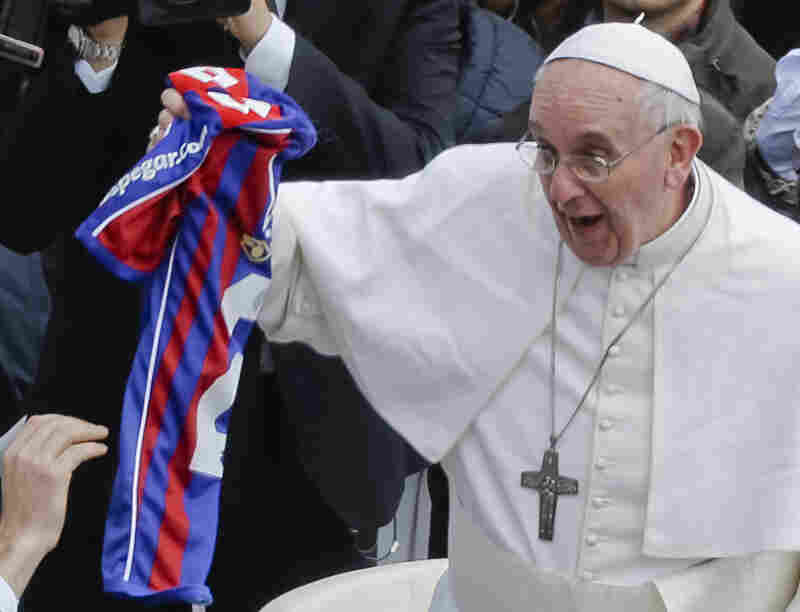 Pope Francis holds a San Lorenzo jersey handed to him at the end of the Easter Mass at the Vatican on March 31, 2013. The pope is an avid fan of the Buenos Aires soccer team. Gregorio Borgia/AP hide caption 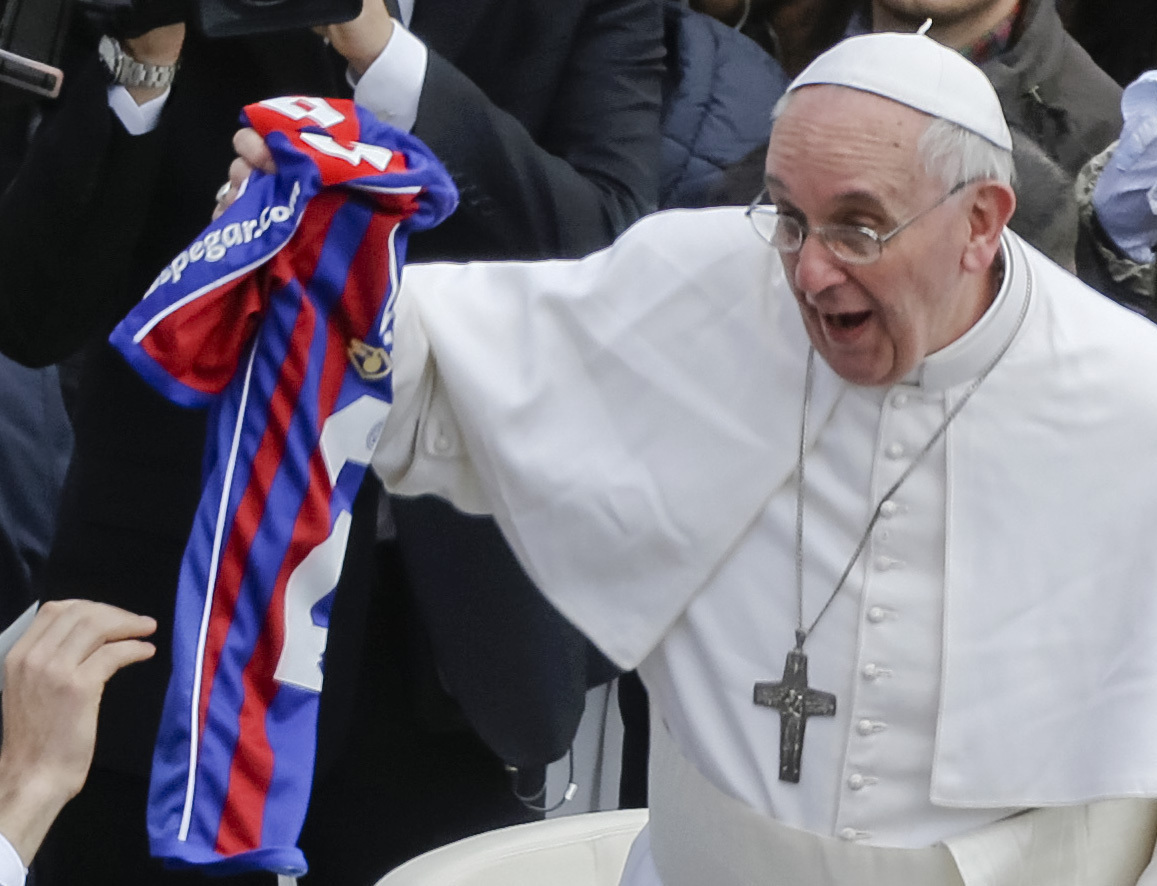 Pope Francis holds a San Lorenzo jersey handed to him at the end of the Easter Mass at the Vatican on March 31, 2013. The pope is an avid fan of the Buenos Aires soccer team.

Odds are you won't get much more than a handshake and a sentence. But in the extremely unlikely event that you and the pope get stuck on an elevator together, here are some promising conversation starters:

Music. The pope's a big fan of Bach, Mozart and Beethoven. There are rumors that when Patti Smith played the Vatican, she did so at Francis' personal invitation — so there's a very real possibility he's fond of punk. And he penned a song himself: "Para que todos sean uno," or "So We Can All Be One."

Sports. The pope played basketball as a kid, but mostly he's a big soccer fan — he's Argentine, after all! He's a supporter of Argentina's San Lorenzo team. It has a game on Sunday, so you can commiserate or celebrate, depending on how that goes. Last month, the New York Red Bulls signed away a San Lorenzo player named Gonzalo Veron, so if you're feeling really brave, you could gloat about that.

Movies. Are you an expert on Italian neorealist cinema? If so, you're in luck! The pope's favorite movie is La Strada, by Federico Fellini. Chat away.

Food. The pope cooks his own meals, but he's not a food-obsessive, as NPR's The Salt blog has previously reported. His meals, like other parts of his life, tend toward humility and simplicity. But he does long for pizza, so you might have that in common. (One pizza place in Naples even managed to hand-deliver a custom pizza to the popemobile.) And according to a Vatican cookbook, he's also fond of empanadas and dulce de leche.

Literature. Pope Francis has said he loves Russian novelist Fyodor Dostoevsky, German poet Friedrich Hoelderlin and Italian poet and novelist Alessandro Manzoni. He also likes Gerard Manley Hopkins, an English poet (and, like the pope, a Jesuit) who brought experimental forms and sounds to Victorian poetry. So you can try chatting about your interpretations of Crime and Punishment, or Hopkins' creative use of adjectives in lines such as "Towery city and branchy between towers; / Cuckoo-echoing, bell-swarmèd, lark charmèd, rook racked, river-rounded."

Dancing. He used to love to tango — and had a girlfriend he went dancing with in his youth. It would probably be frowned upon by security for you to ask him to cut the rug for a moment, but he might enjoy reminiscing about it.

What Shouldn't You Bring Up?

Television shows, for one. The pope says he hasn't watched TV in 25 years — and if you talk him into tuning in for Empire, he'll be breaking a vow he made to the Virgin Mary.

You also might want to stay mum about your enduring love for your pets. The pope's predecessor Benedict XVI was a noted cat lover and kept pet cats at the papal retreat (they weren't allowed in his apartment at the Vatican).

But Pope Francis (who did NOT say pets can go to heaven, as some outlets reported) doesn't seem to be a fan of furry companions. Last year he scolded married couples for raising pets instead of having children: Choosing to have cats or dogs instead of procreating can lead to "the bitterness of loneliness" in old age, said the then-77-year-old man who has sworn a lifelong vow of chastity.

This year, he said the affection between humans and their pets was like "programmed love." "I can program the loving response of a dog or a cat, and I don't need the experience of a human, reciprocal love," he said.

"I'm exaggerating," he said immediately afterward — but that part didn't sink in for many irate pet owners. 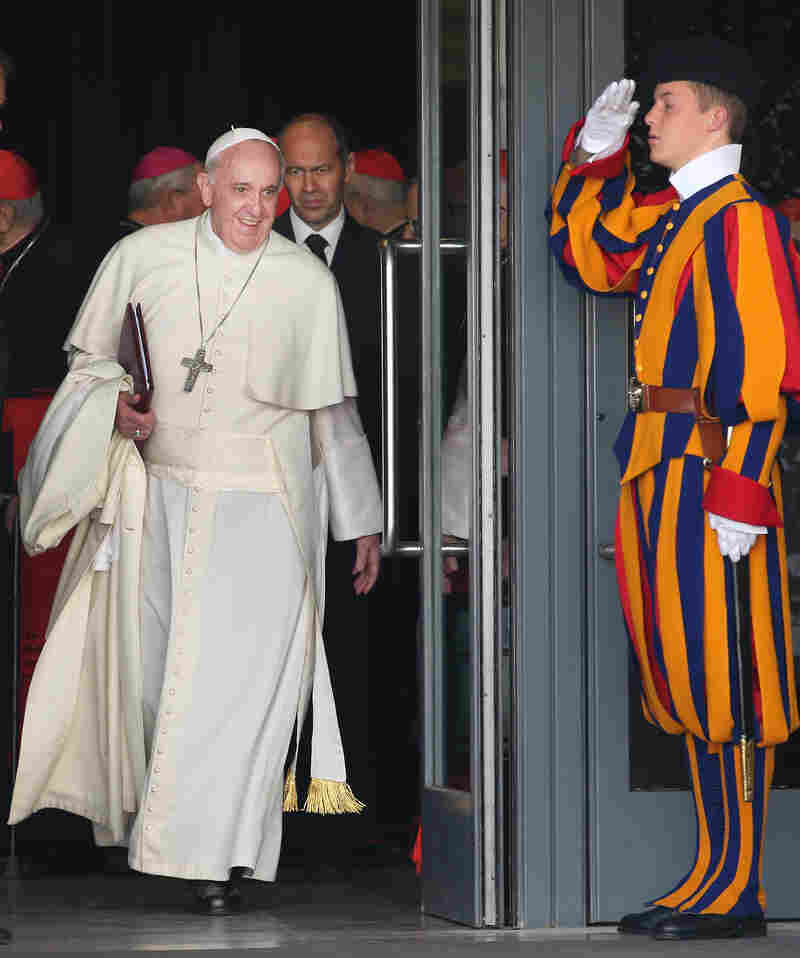 Compared with a Swiss Guard's get-up, the everyday wear of Pope Francis — shown here in the Vatican in 2014 — is downright plain. Peter Macdiarmid/Getty Images hide caption 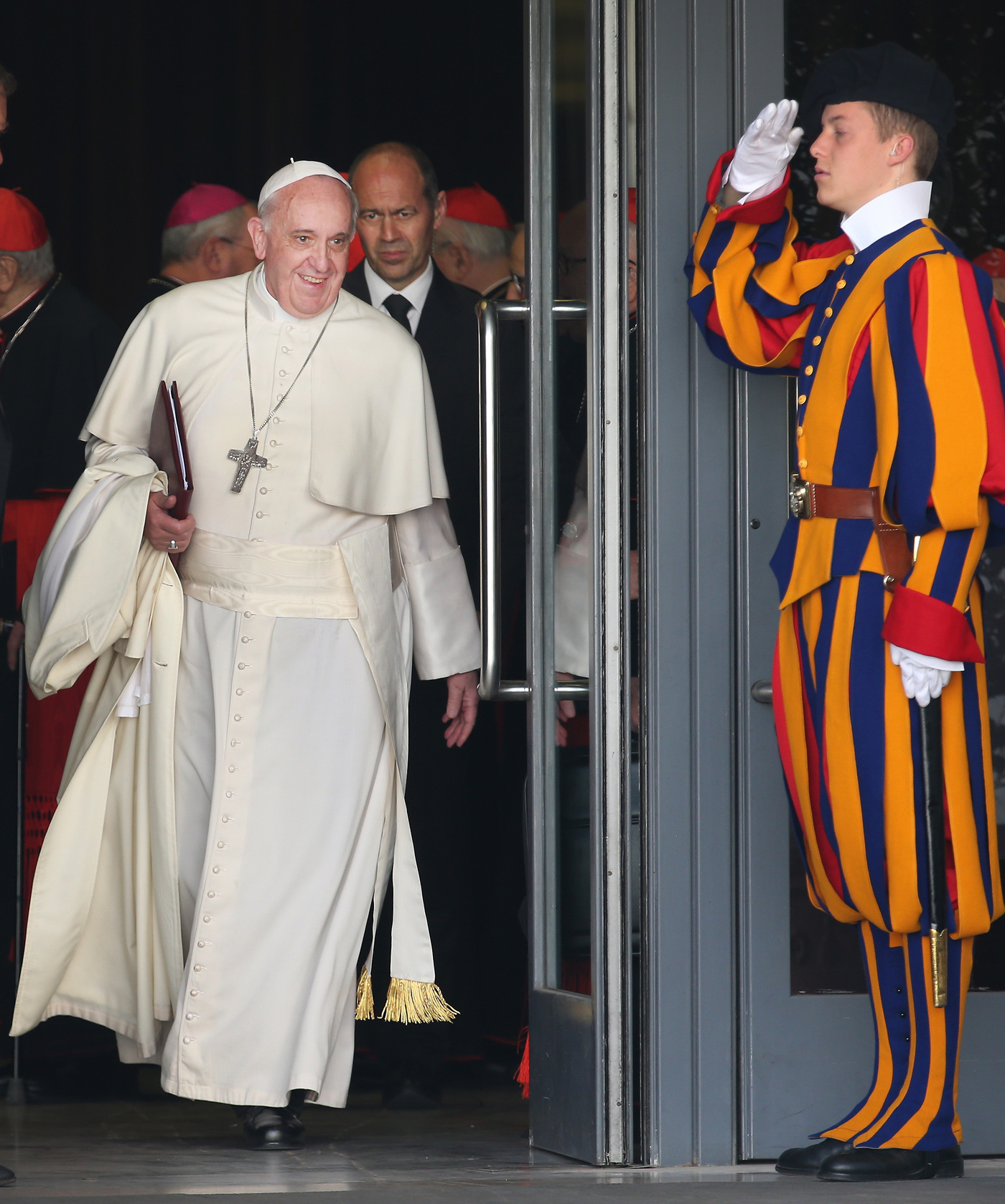 Compared with a Swiss Guard's get-up, the everyday wear of Pope Francis — shown here in the Vatican in 2014 — is downright plain.

In short, don't ask him to praise your love for your feline or canine companions, and you probably shouldn't gift him a kitten. (Although he did once cheerfully receive some donkeys.)

Stumbling over what to call the pope's attire? If he's meeting, greeting or traveling, he's probably wearing his everyday clothes:

If the pope is leading Mass, he will be draped in formal vestments. 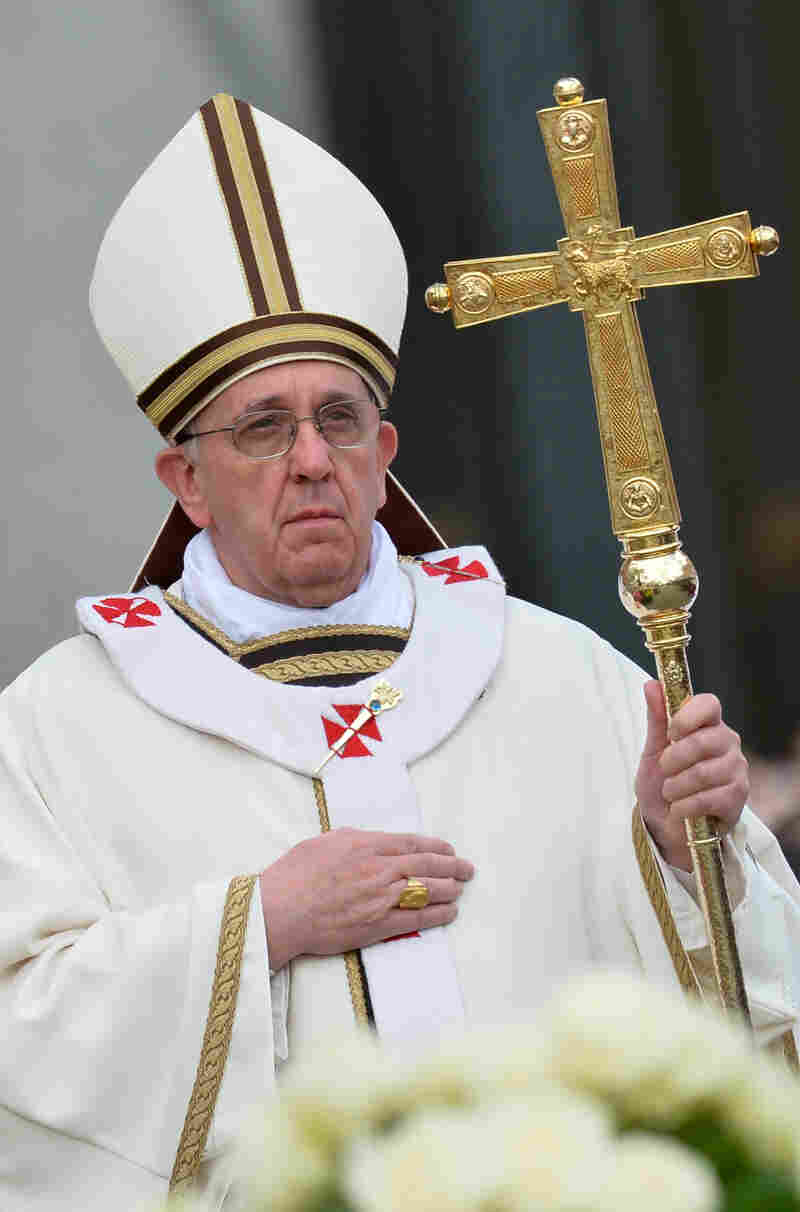 Pope Francis wore a cream-colored chasuble with gold trim to celebrate the Easter Mass on March 31, 2013, at the Vatican. This particular papal ferula features a sheep, driving home the symbolic reference to the pope as shepherd. Alberto Pizzoli/AFP/Getty Images hide caption 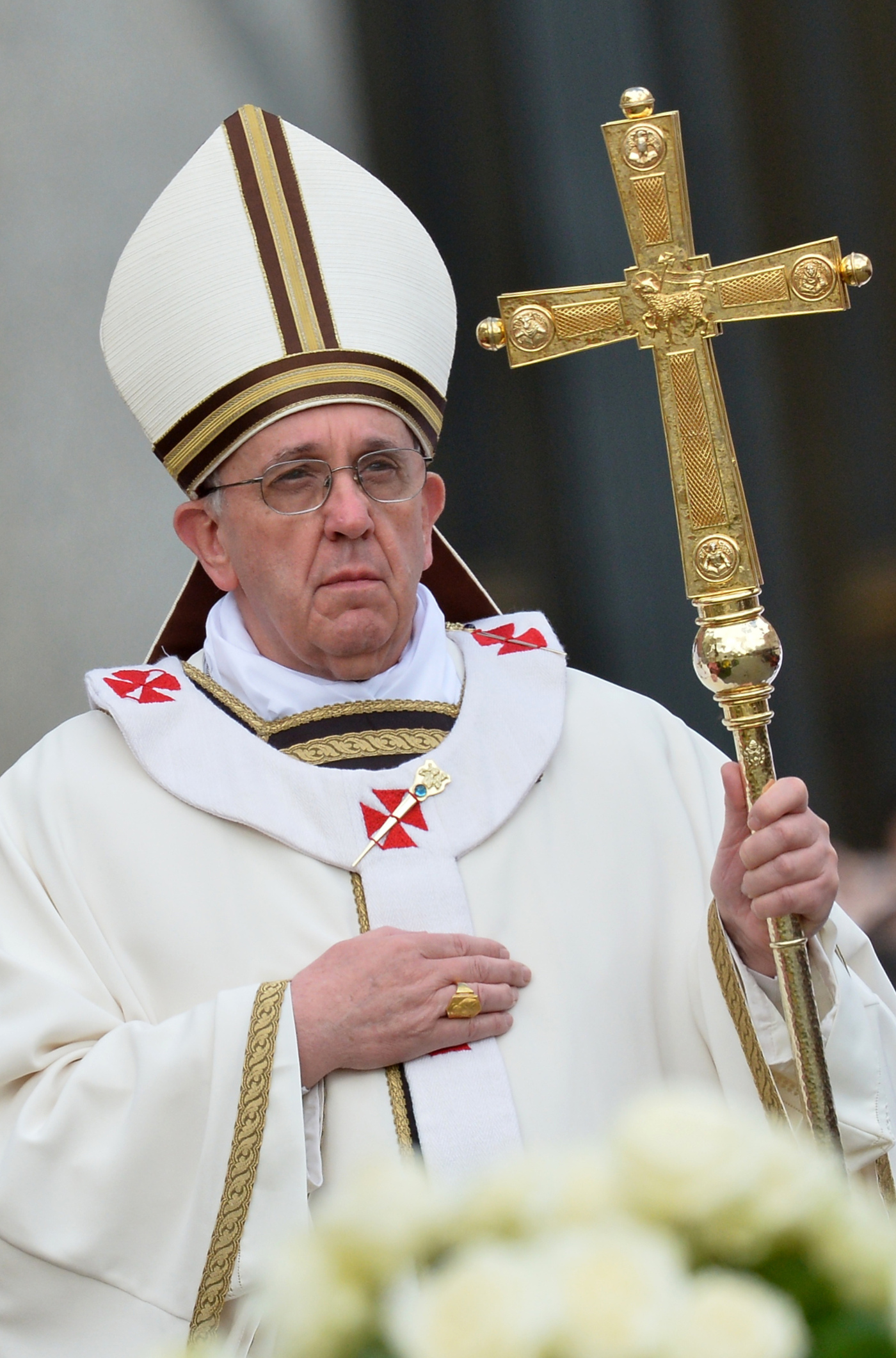 Pope Francis wore a cream-colored chasuble with gold trim to celebrate the Easter Mass on March 31, 2013, at the Vatican. This particular papal ferula features a sheep, driving home the symbolic reference to the pope as shepherd.

In general, Pope Francis' attire tends to be downright ascetic by pope standards — silver cross, instead of gold; plain fascia, instead of one emblazoned with his coat of arms; a simple mitre, sans gold and jewels; plain black shoes, instead of red; a zucchetto, instead of a fancier hat option — and no mozzetta, or ermine-lined cape.

If you're dying to comment on his outfit to your neighbors, you don't have to know a ferula from a fascia to say, "He dresses so simply. Look, not a jewel in sight!"

(For your part, when you're meeting the pope, you don't have to wear anything special or fancy — just dress modestly.)

Did The Pope Make A Mistake?

Call you by the wrong name, misidentify the city he's in? He's allowed. The idea of papal infallibility is not that the pope is incapable of erring — it refers rather narrowly to times when the pope makes an official declaration on faith or morals while acting in his capacity as head of the church.

Did You Make A Mistake?

Accidentally address the pope by name, instead of as his holiness? Try to chat about new TV shows? Convince yourself he spoke Russian? Call his zucchetto a zucchini? Forget you were meeting the pope, and wear your most revealing outfit?

The pope is pretty well-versed in concepts of grace and forgiveness.