Accessibility links
The Blues Finds A Home In A South Central Garage As regular as a church service, Franklin Bell's informal workshop meets every Sunday at his L.A. garage. For a small voluntary donation, guests eat, drink and dance to music both raw and graceful. 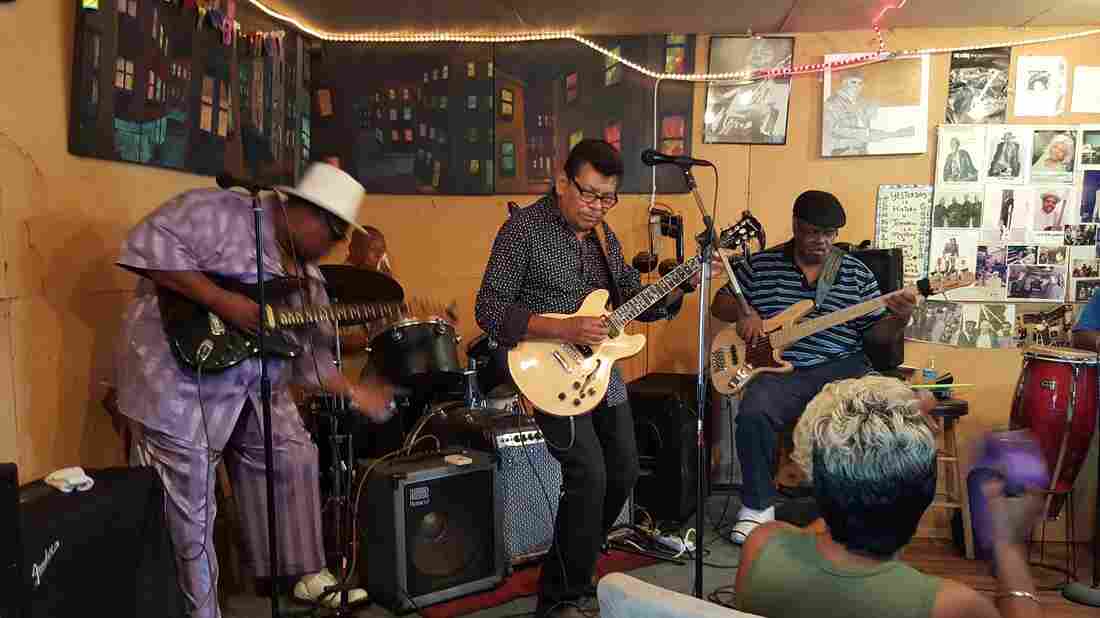 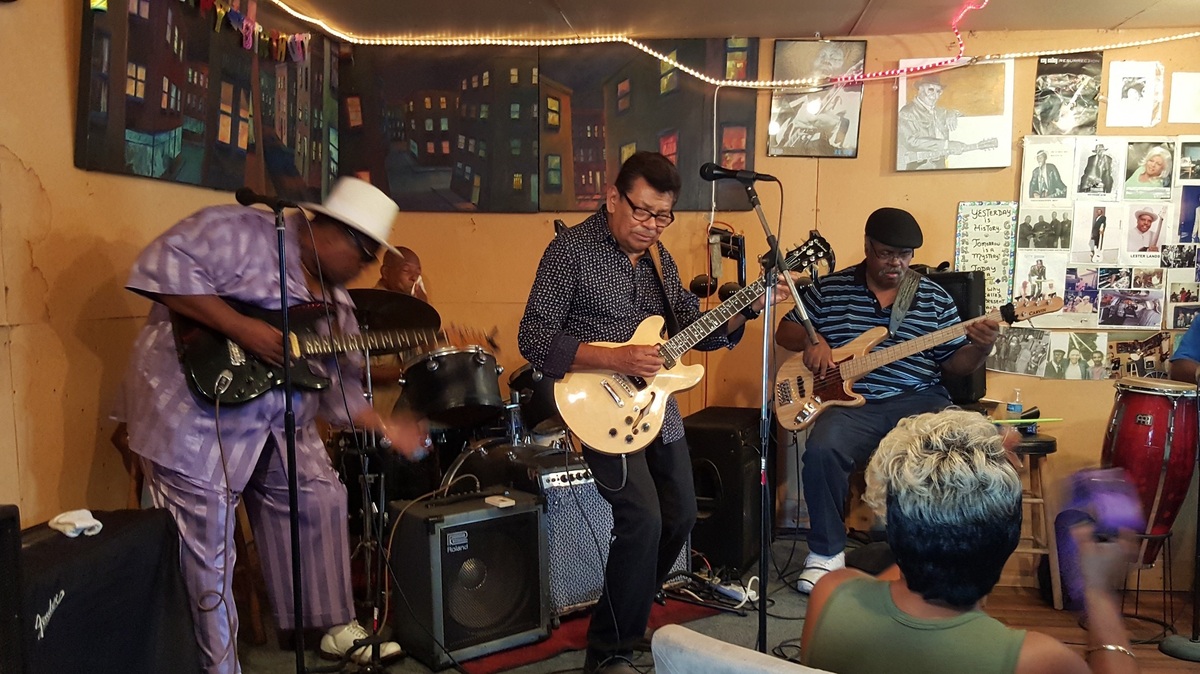 One sun-baked residential street in South Central Los Angeles is regularly bombarded by the chorus of jets cruising toward Los Angeles International Airport. Unless you're in Franklin Bell's garage, where the walls soak up the raw, earthy chords of L.A. blues.

For the last decade, 81-year-old Bell has hosted his Blues Workshop every Sunday, as regularly as a church service, in a one-car garage rebuilt to hold about 50 people. The place gets crowded with folks dressed in their Sunday best; for a small voluntary donation, they eat, drink and dance to music that ranges from raw to graceful. There's a stage in the back, and anyone's welcome to sit in.

"We play R&B, we play a lot of pop music, but basically we go with the blues — and that's what people look for when they come to the Workshop," Bell says. "They love to come to try to participate, play the blues and listen to it. And I just love that."

Bell came to L.A. from Alabama in 1968. He ran a gas station that fell to the 105 freeway. A musician since high school, he picked up his drums and hit the road. The years passed, and as his eyesight began to fail, he decided to set up shop in the garage.

'Cause I enjoy the people, and the people be enjoying themselves. That's what I like, too.

A dapper Tuscaloosa native, Bell sports a crisp dark suit and tie despite the heat. He wears a white cap tilted back on his head. He carries a plastic cup in his hand, sipping from it now and again. Even though he's legally blind, he still looks you in the eye when he speaks. It's just part of getting older, and there's a lot of that in the garage.

"If you stop and think about it, the blues is for people that age: 60 and over," says Lester Lands, a guitarist and vocalist from Baton Rouge who cut his teeth on the Southern gospel circuit. At 62, he looks about half his age. "A lot of them live the blues, coming out of the South and stuff, man. And still today, that's their soundtrack, the blues. So that's why it's so nice and so popular around here."

Betty Madison, a workshop audience regular with a Lena Horne smile, is another transplant. "I'm originally from Louisiana but I've been here since 1942. I'm 84," she says, working the dance floor like a younger woman. "I'm here every Sunday. I go to church and come home, get me a nap and then get dressed and come over and listen to the blues. 'Cause I enjoy the people, and the people be enjoying themselves. That's what I like, too."

Madison and most of the folks here fall into what's known as the Second Great Migration, a period that lasted from the early 1940s until about 1970. During the migration, African-Americans moved from states like Texas, Mississippi and Louisiana to cities in the North and West, seeking jobs in California and beyond. Many such Western migrants, like harp player and singer Sammy Lee, found them in the burgeoning defense industry.

"[I] graduated from high school. Started working at a car wash. Few years later I got drafted, went in the army. Came out the army. Went to work for Northrop Aircraft," Lee says. He made L.A. his home in 1965, and he still plays in clubs around town in addition to his Workshop Sundays.

Blues is among the biggest imports into this small South Central community, but the Southerners brought more than just regional music. "Blues and food, we got something to eat! Got to have some food to go along with the blues," Bell says.

The buffet table is a mighty ritual at the Workshop. Lester Lands asks everyone to gather for a prayer: "Right now they telling me that some food is about to be served. We don't wanna offend nobody but we give thanks to the Lord and Savior Jesus Christ here. Now, let's bow our heads ... ." Lands says everyone is welcome. "Here, it's not no mess, no racial barriers, none of that. It's just good clean fun, man."

Yet you don't see many young people showing up for the good clean fun of the Blues Workshop. Twenty-nine-year-old Donae Alexander is an exception. She says her generation just doesn't get the blues.

"I think that they need to just wake up, 'cause that's what time it is," she says. "If you don't know, basically, where we came from, far as in your roots and a certain type of music that you listen to — and what they have going on today, hip-hop is not the same, to be honest. It's not. Not without the old school. You have to go way back to come to present, that's how I look at it."

Guitarist and singer Tony Ibarra is one Workshop fixture who didn't come from the American South. The Guadalajara native played in primal Mexican rock combo Los Fugitivos, and came to Southern California in 1963. He's been slinging the blues for decades, and has seen his share of rough joints. In fact, he spent his Summer of Love onstage in Tijuana. But this isn't that.

"No, no, no, no ... I never seen anything. Here and there is somebody screaming, which is normal, you know, but nothing to scare you away," Ibarra says. "Everybody's cool. It's very unique. It's like the real thing to me, you know? Everybody's friendly, no fights. We eat, have a few beers, listen to good players, listen to good music, talk to the people. To me it's great."

That's exactly what Franklin Bell wanted all along: "It don't take no big crowd, it take a few peoples that you can get together and if they can get some joy and they can spread that as they go through life it makes a difference. That's what my thing is about." And, as the jets continue overhead, flying toward the future, in the garage the blues will continue to extend the past, thanks to Franklin Bell.