Accessibility links
Switchtracking | Hidden Brain The first episode of Hidden Brain explores switchtracking: a common pattern in conversations you'll be accusing your partner of in no time! Plus speedy science, a cup of tea and a song from Adam Cole. 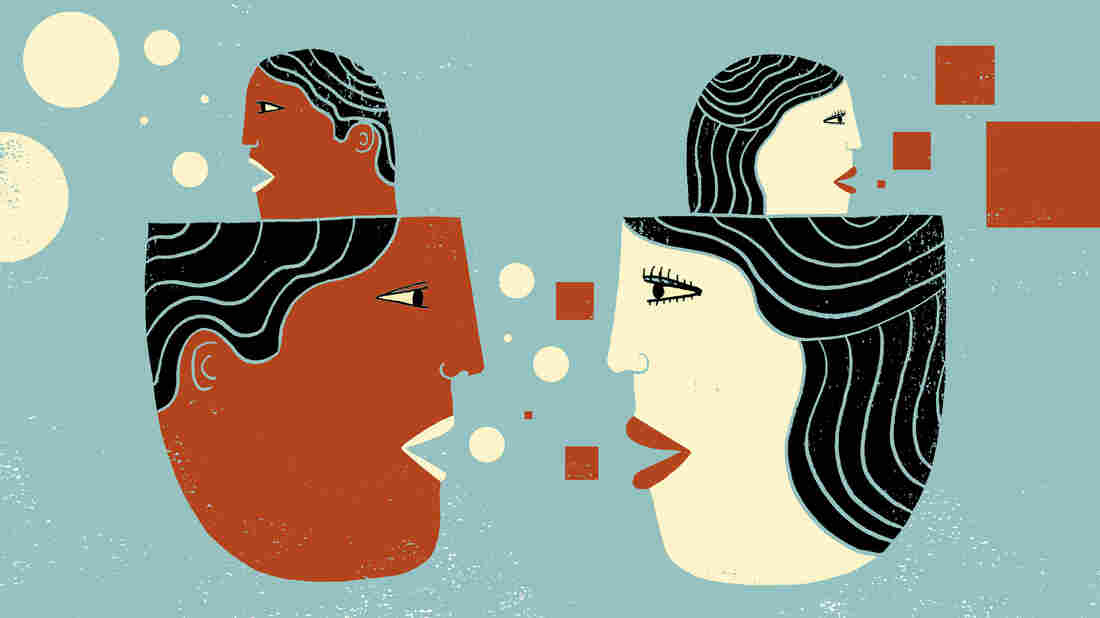 Switchtracking, as defined by author Sheila Heen, is when "someone gives you feedback, and your reaction to that feedback changes the subject." Hanna Barczyk for NPR hide caption 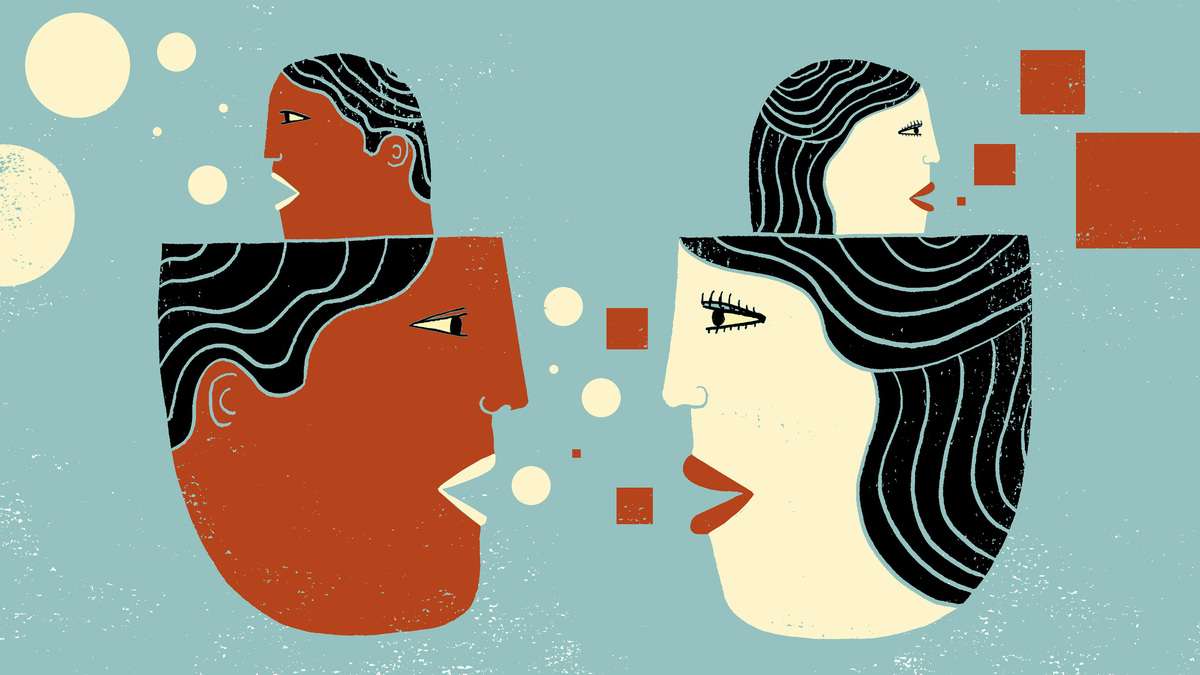 Switchtracking, as defined by author Sheila Heen, is when "someone gives you feedback, and your reaction to that feedback changes the subject."

Pour yourself a cup of tea, turn your (right) ear toward your speakers and take a listen to the very first episode of the Hidden Brain podcast. We're talking a lot about feedback. First, we'll hear from author Sheila Heen about a common communication problem that pops up in many relationships.

Then, host Shankar Vedantam and author Daniel Pink will play a rapid-fire game of Stopwatch Science. They'll give you some tips that might help you communicate better — and perhaps even have better luck bumming a cigarette.

After that, Vedantam sits down for tea with comedian Meshelle, the Indie Mom of Comedy. They talk about the importance of rituals — until they get sidetracked by an unexpected visitor.

This week, NPR's Adam Cole also joins the podcast for a game we're calling ColePlay (with apologies to a British pop band you may have heard of). He's listening in to all the segments and then composing a song stitching them all together. Listen all the way to the end of the episode to hear the song!

Author Sheila Heen, along with Douglas Stone, recently wrote a book called Thanks for the Feedback: The Science and Art of Receiving Feedback Well. One of their chapters focuses on a phenomenon called "switchtracking" — which Sheila says, is a pattern in feedback conversations "so common that it's instantly recognizable."

Essentially, switchtracking is when "someone gives you feedback, and your reaction to that feedback changes the subject," Heen says.

She uses an example from Louis CK's 2006 TV show Lucky Louie to illustrate. Louie and his wife, Kim, are getting ready for a child-free, romantic weekend, and Louie has just brought home some red roses.

"Listen," Kim says. "Try not to take this the wrong way, OK? But, if we're going to be married for the next 30 years, I need you to know that red roses aren't my thing."

Louie responds by changing the subject: "Okay well, um ... can I critique how you just told me that?"

"The first person stays on their own track. The second person actually smoothly switches to a different topic, which is their own reaction to the feedback, and often the feedback that they have themselves for the first person," Heen says. "They just get further and further apart ... And they don't even realize that they're going in different directions."

"I've told you before that I don't like red roses," Kim says. "Remember?"

"I just think that you should have thanked me for the flowers first, and then said the thing about the roses," Louie responds.

Often, neither person even realizes that they are talking about two different subjects.

Sometimes, switchtracking is even more subtle than this — because it's happening inside one person's head. Heen says it's particularly common in a hierarchy, from the person lower in the chain.

"Your boss is chewing you out, and you're not saying anything out loud ... but what you're thinking, of course, is: 'OK, first of all, this is not my fault, and second of all, you're even worse at this than I am, and third of all, I can't believe that you're doing this in front of everyone and you're this unprofessional ... and everybody, by the way, hates you,' " she says.

They just get further and further apart ... And they don't even realize that they're going in different directions.

Sheila Heen, on "switchtracking" in conversations

"You are switchtracking to about four other topics of your feedback for him or her, but it's a silent switchtrack, so your boss isn't necessarily aware that you're not paying any attention at all," Sheila says.

Daniel Pink is a friend of the program and fellow social science nerd. On Stopwatch Science, Dan and Shankar agree on a topic, and each brings two pieces of research to share. They have 60 seconds to convey each idea.

In keeping with this episode's theme of giving and receiving feedback, here are four pieces of science-informed insight that could help you communicate better in your everyday life.

We're always trying to get people to pay attention, but there's some research showing that we have a powerful (and affordable) weapon at our disposal: the Post-it note. Randy Garner at Sam Houston State University gave faculty members a survey to complete. Some also received a cover letter or a personalized Post-it note asking them to complete it. Lo and behold, the Post-its made faculty members far more likely to complete the task. So if you want someone to do something — you know what to do.

An Idea That Stuck: How A Hymnal Bookmark Helped Inspire The Post-It Note

A few years ago, Max Gunther and his colleagues at Vanderbilt University analyzed the brains of men while they listened to the voices of their wives giving them advice on a certain issue. When the advice was on a subject that the men felt was close to home, they seemed to question the motivation of their wives, rather than listening to the content of the feedback itself. The takeaway? Assume positive intent when receiving feedback, or you might miss the point!

3. To Get Someone's Attention ... Try Whispering In Their Right Ear.

In what Adam Cole refers to as "the most Italian study ever," Luca Tommasi and Daniele Marzoli examined whether people were more likely to comply with a request when it was whispered in their left ear or their right. They found people were more likely to give someone a cigarette in a noisy nightclub when the request was whispered in their right ear. Not kidding.

If you can boost a person's self-esteem before giving them constructive criticism, they might be more receptive to it, Tracy Epton and her colleagues at the University of Manchester found. People were more likely to be open to feedback if they were asked to reflect on their own positive qualities first.

"You are a wonderful human being, a great father, a wonderful husband, a brilliant journalist," Pink tells Vedantam. "But you blew your time by 10 seconds."

We'll see in the next edition of Stopwatch Science whether the host took that feedback to heart.

Next, Vedantam's friend Meshelle tries to persuade him to slow down and enjoy the ritual of making a cup of tea. Studies have shown that incorporating rituals in our lives can increase our enjoyment of things. Vedantam and Meshelle put this research to the test by meeting at a teahouse on Capitol Hill in Washington, D.C., where every aspect of the tea-making process is performed with care. This forces Vedantam to slow down — which, he says, he rarely does.

"So let me ask you a question," Vedantam says. "When I leap out of bed in the morning ... saying 'Oh my God, I'm late, oh my God, there's six things that I have to do and I have time for only three ...' If I do this every single morning, does that count as a ritual?"

"No," Meshelle says. "That's pandemonium. I don't know what the ham sandwich that is."

She thinks that the intricate details of the tea-making ritual are essential to the experience — and to the taste.

"We wouldn't have this experience" if the tea was microwaved, Vedantam agrees. But, he adds, "It would be much more efficient."

Listen to the end of the episode to hear Adam Cole's song tying all these themes together. He says it's like "a less-talented Gershwin brother writing a musical called something like All Aboard!"

We say: You won't be able to get it out of your head.

Subscribe to Hidden Brain in iTunes, in the NPR One app, or wherever you get your podcasts.

The Hidden Brain Podcast is hosted by Shankar Vedantam and produced by Kara McGuirk-Alison and Maggie Penman. Follow us on Twitter @hiddenbrain, @karamcguirk, and @maggiepenman, and listen for Hidden Brain stories every week on your local public radio station.