Accessibility links
5 TV Shows To Watch In An Otherwise Uninspiring Fall Season The networks mostly played it safe — and boring — this year. But critic Eric Deggans found a few shows you shouldn't miss: The Muppets, Supergirl, Grandfathered, The Grinder and Crazy Ex-Girlfriend. 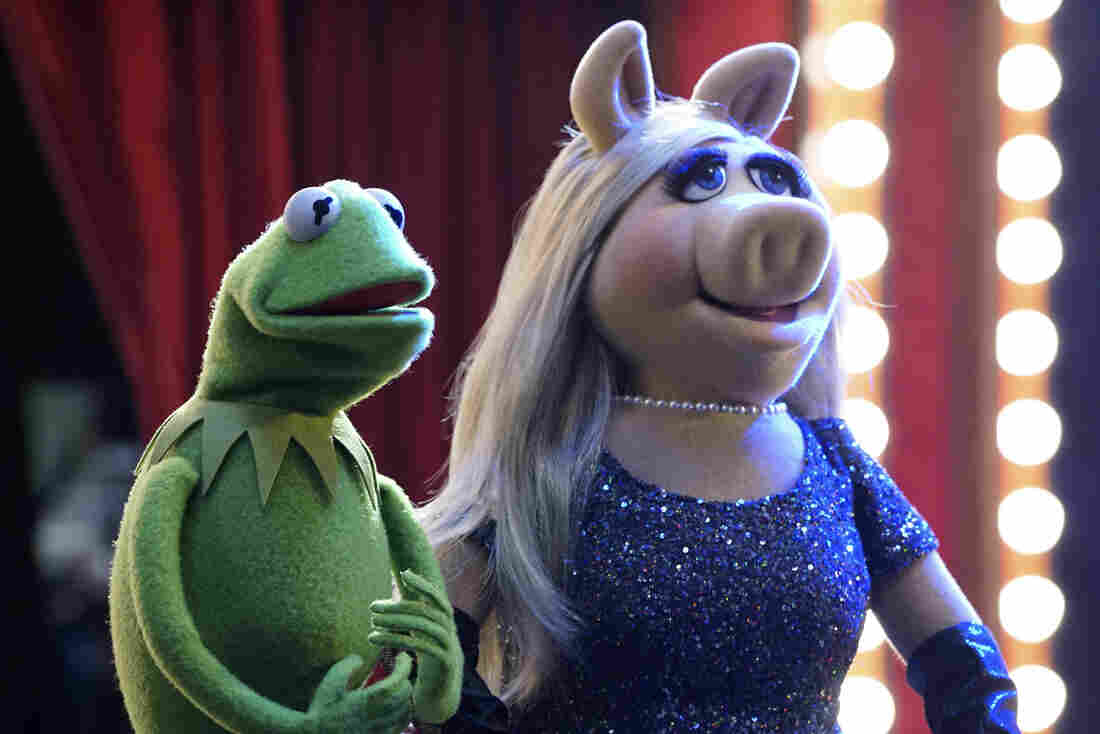 ABC's The Muppets is a faux-documentary about the making of the late night talk show Up Late with Miss Piggy. Eric McCandless/ABC hide caption 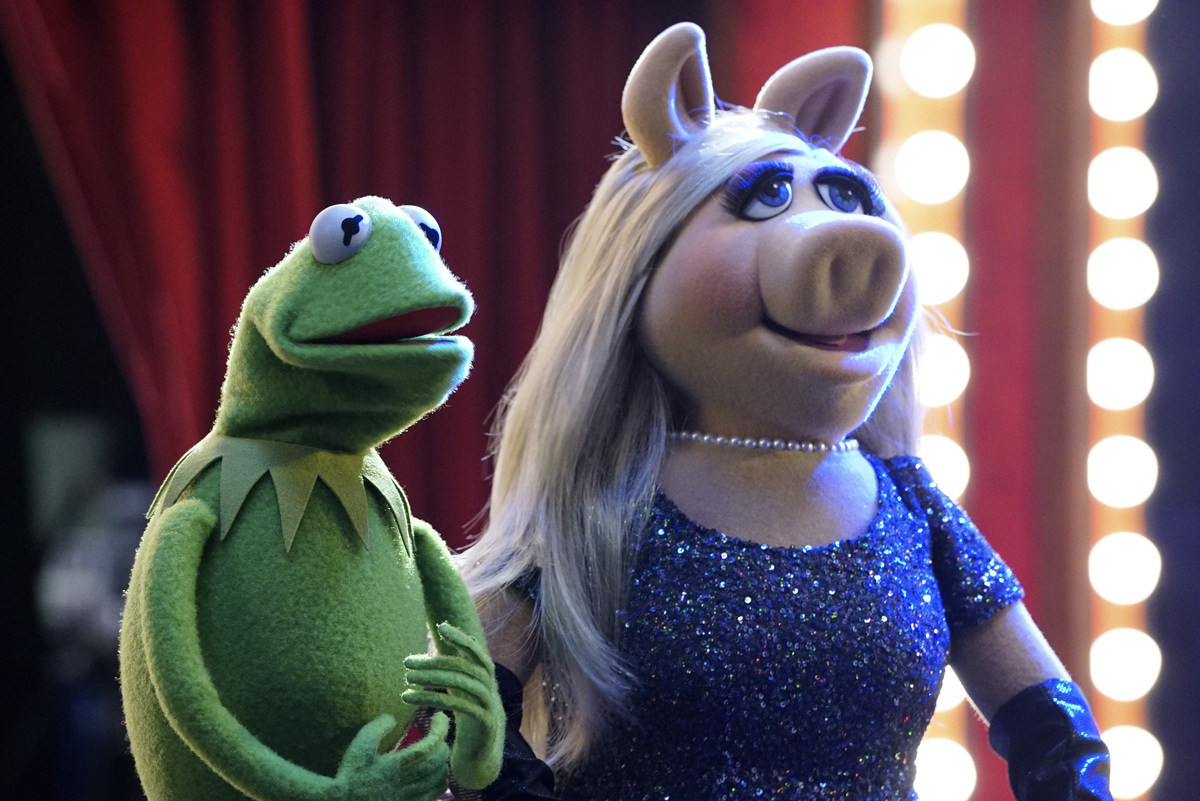 ABC's The Muppets is a faux-documentary about the making of the late night talk show Up Late with Miss Piggy.

One of the most painful ironies of the TV business is the way short term business needs force action that makes no sense in the long run.

Consider this week's start of the fall TV season. There's a heap of brand new programs coming to the networks just as broadcasters face more competition than ever from shows on cable and online. This means there's never been a greater need for ambitious, groundbreaking material to prove the broadcast networks haven't become the buggy whips of the media business.

Because they must court advertisers and the widest audiences possible, ABC, NBC, CBS and Fox have developed nearly two dozen new series which can mostly be summed up by one word: Retrenchment.

But instead, because they must court advertisers and the widest audiences possible, ABC, NBC, CBS and Fox have developed nearly two dozen new series which can mostly be summed up by one word: Retrenchment.

So, of course, using the topsy-turvy logic of the television business, this year's season is packed with shows that play it safe trying to stitch a new face on old concepts.

In this limited field, only a few new programs have soared. Here's a quick list of my top five TV shows of the fall (along with a couple to avoid at all costs).

The Muppets: It's tough to go wrong with a dose of Kermit and Miss Piggy. So it makes sense ABC would bring The Muppet Show into the 21st century with a comedy filmed like a faux-documentary — spiced with the kind of shaky camera work and "confessional" interviews already seen on network sibling Modern Family. This show centers on the Muppets' efforts to produce a late-night show hosted by Miss Piggy as she and Kermit are negotiating a high-profile breakup. When Kermit sighs after an argument with Piggy and pronounces his life a "bacon wrapped hell on Earth," you know you're in new territory — kinda like The Larry Sanders Show-meets-Muppets 2.0. Debuts Sept. 22 on ABC.

Supergirl: Yes, I'm a comic book nerd who has been waiting a long time for a superhero series featuring someone who isn't a white guy. Still, I'm excited by the first episode of CBS' earnest take on Superman's cousin. The show has a loose connection to the most recent Man of Steel movie, depicting a relative from Superman's doomed homeworld who got caught up in space travel and arrived on Earth many years after he did. Crafted by the producers who made the CW's superhero hits The Flash and Arrow, Supergirl laces its story about a wannabe hero who can fly and lift a passenger jet with the emotional tale of a young woman ready to push herself to the limit while trying to hold her non-superhero life together. Melissa Benoist (Glee, Whiplash) is spot-on as Supergirl and Ally McBeal alum Calista Flockhart chews the scenery appropriately as media mogul Cat Grant. The show debuts Oct. 26.

Grandfathered and The Grinder: Both of these Fox series are centered on pretty boy leading-man TV stars who don't always get credit for how funny and sharp they can be. Grandfathered features John Stamos as a self-centered forever bachelor who discovers he has a son and a grandson in the same moment, turning the typical criticism of Stamos — that he too often seems like a TV-sized version of megastar George Clooney — and making it work for this character. The Grinder stars Rob Lowe as an actor who played a lawyer for many years on TV returning to his hometown to help a law firm led by his perpetually overshadowed brother — played by perpetually overshadowed Wonder Years alum Fred Savage. Both shows are surprisingly nimble comedies and yet both programs are also limited by predictable story lines. Here's hoping these characters can soar beyond those drawbacks in a hurry. Both shows debut Sept. 29.

Crazy Ex-Girlfriend: Originally intended for Showtime, this CW series centers on a high-strung overachiever who walks away from a high powered legal career to chase a high school ex-boyfriend who dumped her years ago. She checks off all the stereotypes — obsessive, manic and impulsive — as she moves to the town of West Covina, Calif., to win him back. Oh yeah, and it's a musical comedy, with a showstopping production number about getting ready for an important date and a cast with serious Broadway credits. Still, star Rachel Bloom, who's also the show's co-creator, is an energetic talent worth watching closely, even when the program's oddball premise gets in the way. This bows Oct. 12.

Dr. Ken: It's the worst malady for any old school multi-camera sitcom: Domineering Star Syndrome, a TV comedy illness in which only the star is allowed to be funny. Turns out, a serious case of DSS has hobbled comic actor Ken Jeong's disappointing ABC sitcom about an acerbic doctor with a wacky family — no one else gets to shine. So Jeong winds up working way too hard to prop up predictable storylines with middling humor. Debuts Oct. 2.

Truth Be Told: This awkward, completely unfunny NBC sitcom about two couples who are best friends — one is black and the other is a white man married to a biracial woman — feels like a program developed by a committee determined to Tell The Truth About Race In America. Instead, they've created a show with no unique characters that struggles for anything but the most obvious observations. Makes you wonder who Saved By the Bell alum Mark-Paul Gosselaar ticked off to get stranded in such a hapless effort. Starts Oct. 16.