Accessibility links
Why Nonstop Travel In Personal Pods Has Yet To Take Off Personal rapid transit was supposed to be the future of public transport: lightweight pods on elevated tracks, on-demand destinations. But funding issues make cities reluctant to change course.

The average American commuter spends 42 hours per year stuck in rush-hour traffic, according to one recent study.

More than four decades ago, West Virginia University thought it had found a solution to urban traffic woes: It built a transportation system known as personal rapid transit, or PRT.

Instead of riding with dozens of others on a train car or bus, PRT pods carry a small number of people. And instead of making stops, PRT takes you directly to your destination, nonstop.

To its supporters PRT makes total sense, yet there are only a handful of PRT systems in operation around the world.

To find out more about whatever happened to PRT, I recently traveled to Minneapolis to meet Mike Lester, CEO of Taxi 2000, a company that designs PRT systems. 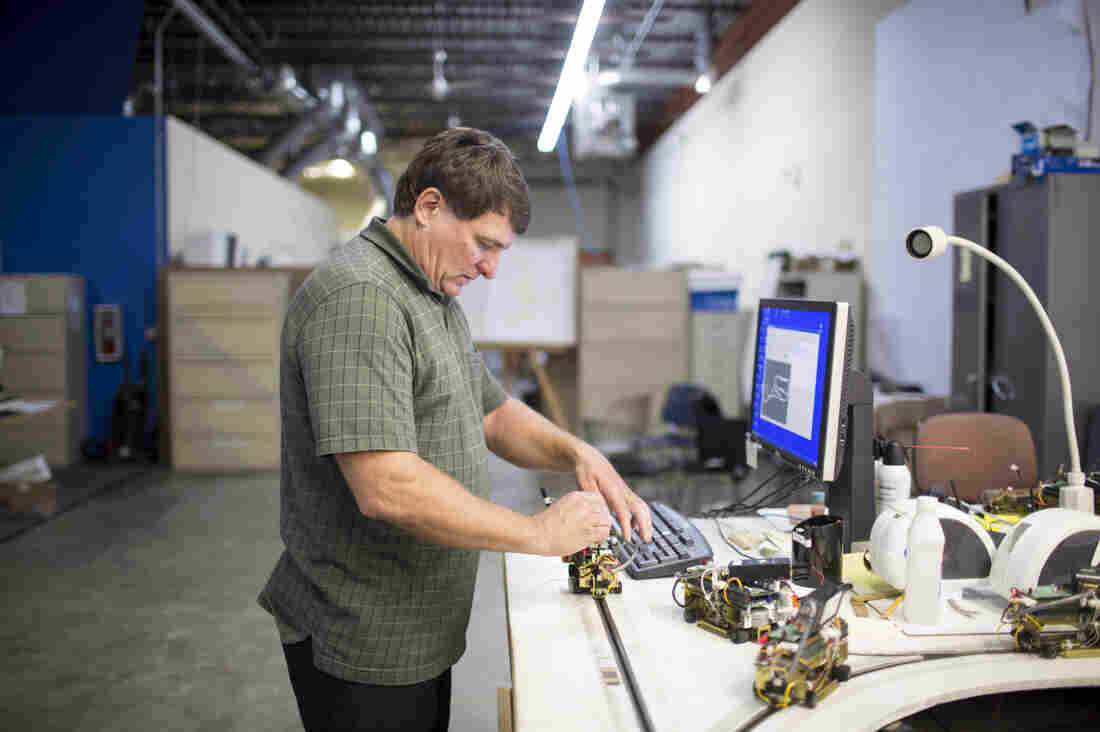 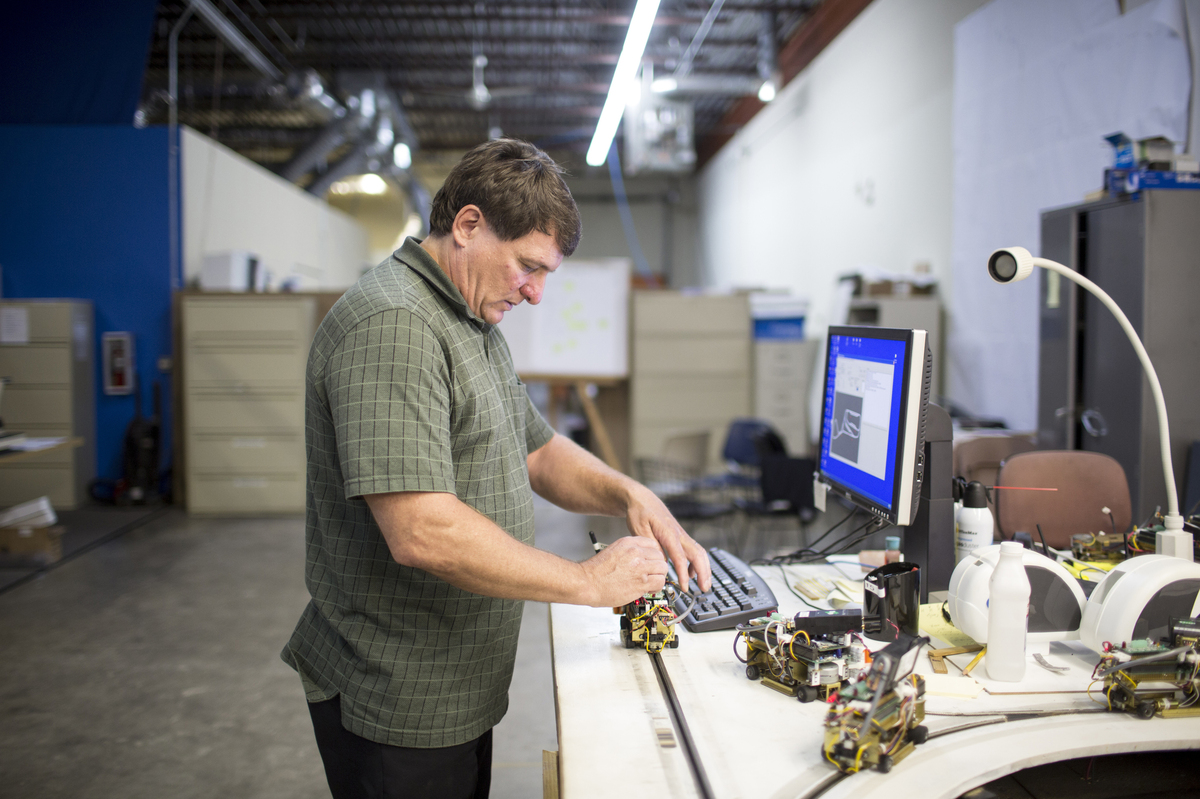 Lester's PRT system is called SkyWeb Express. He has built the software for it and a prototype of the pod it would use, and he has engineering drawings for the rest of the system. All he needs is a customer.

He takes me over to a large table where he has set up what looks like a slot car race track, which he tells me is about a 1/15th scale model. It simulates how a real system would work, including communication with a central computer that keeps track of imaginary passengers who want rides.

Lester takes several small cars and places them on the track.

Most of the time they whiz around the track, but occasionally one pulls off into a siding.

"That's on off-line station," Lester explains. "The computer said there's a passenger over there, you need to go get him. So the control system just sent the car over there."

The pods that carry passengers are "on demand," meaning you only move a car when it's needed — no empty buses following a set schedule. 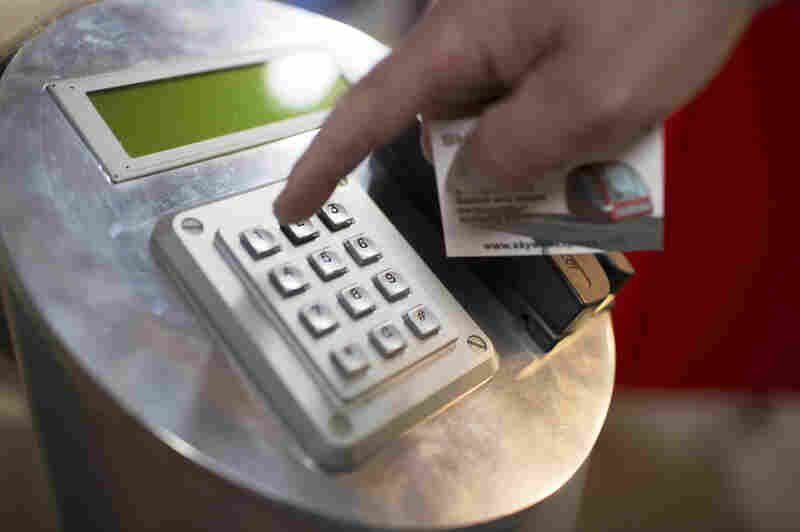 To use SkyWeb Express, the passenger would swipe a fare card and enter the destination station code on the boarding station before entering the car. Ackerman + Gruber for NPR hide caption 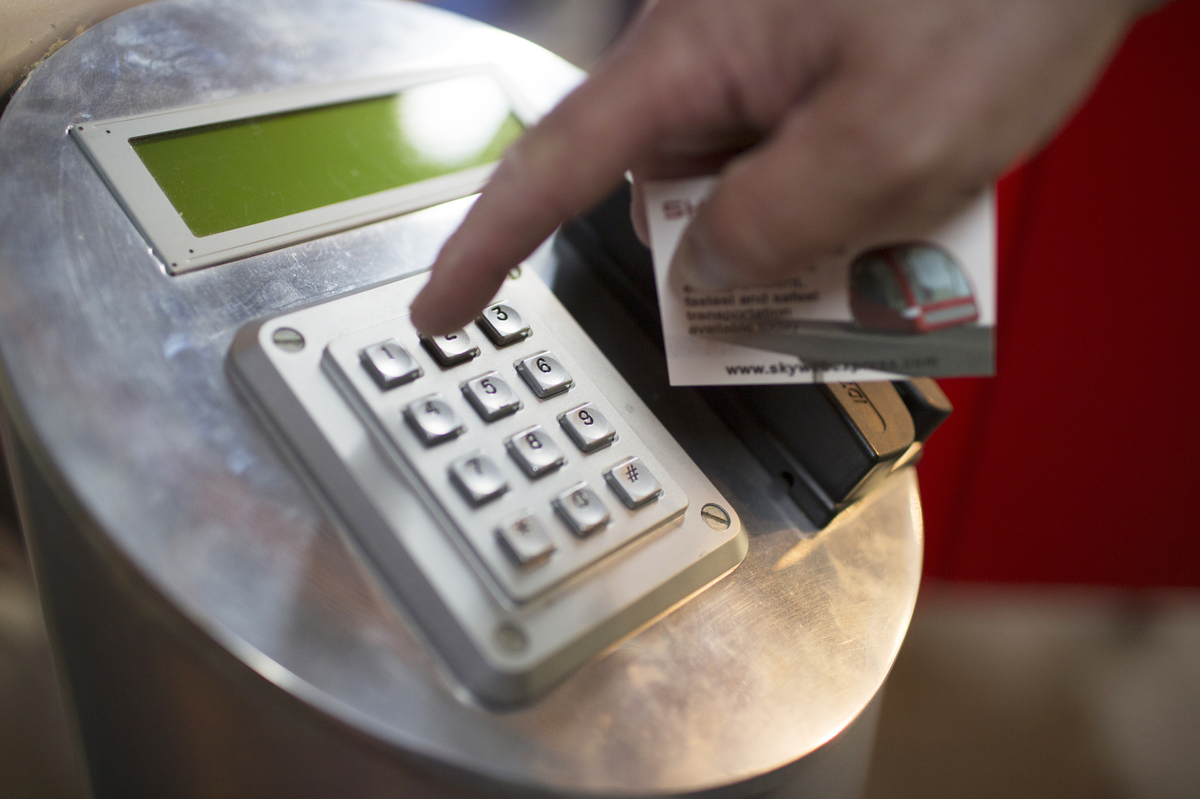 To use SkyWeb Express, the passenger would swipe a fare card and enter the destination station code on the boarding station before entering the car.

And because the PRT vehicles are lightweight, you don't need tunnels, track beds or other expensive infrastructure. Skyweb Express runs on an elevated guideway held up by nothing more than stanchions about the size of lampposts.

"The automated vehicle is not interacting with pedestrians, bicycles, buses and not-automated vehicles," he says — and that avoids accidents and prevents traffic-related stops.

Lester is eager for me to take a ride in the full-sized prototype of his PRT pod. He hands me a laminated card with a magnetic strip on it: a Skyweb Express fare card.

He leads me over to a set of stairs that goes up to a small platform. In a real system, I'd insert the fare card into a display, punch in the station and instructions for the pod would be coded on the card's magnetic strip.

In addition to Taxi2000 in Minnesota, here are a few notable firms vying to build the next PRT system:

JPods: Another Minnesota company, JPods, is meeting with residents in Arlington, Va., next month. It will be promoting its PRT system as the solution to transit woes on the city's congested Columbia Pike, where a streetcar project recently was canceled.

Ultra Global PRT: The company that created a PRT system at London's Heathrow Airport is the favorite of wealthy video game pioneer Richard Garriott, who wants to see PRT in Austin, Texas.

Waiting at the platform is a tiny, bright red, pod-like car. There's a bench that can fit three passengers. Lester tells me to swipe my card in a card reader next to the pod. When I do, the pod's door opens. I get in and sit down.

There's a button over the front window that says "go" on it. When I push it, the door slides shut and latches. The pod glides soundlessly down a track that's about 60 feet long. When we reach the end, the car stops, and the door slides open.

To be honest, I think riding to work in one of these automated pod cars would be kind of fun.

So why has PRT failed to catch on? Ken Halverson, chief financial officer for Taxi 2000, says the company's potential customers are playing a game of chicken.

"We've had 40 or 50 cities tell us they would love to be second," says Halverson. "But you can't be second until someone steps up to be first."

Taxi 2000 is headquartered in Minneapolis, so I speak with Tom Sorrel, a former Minnesota commissioner of transportation, to find out why that city doesn't have a personal rapid transit system.

He says the state considered PRT, but there was stiff opposition from backers of buses and light rail, and nothing was ever built. 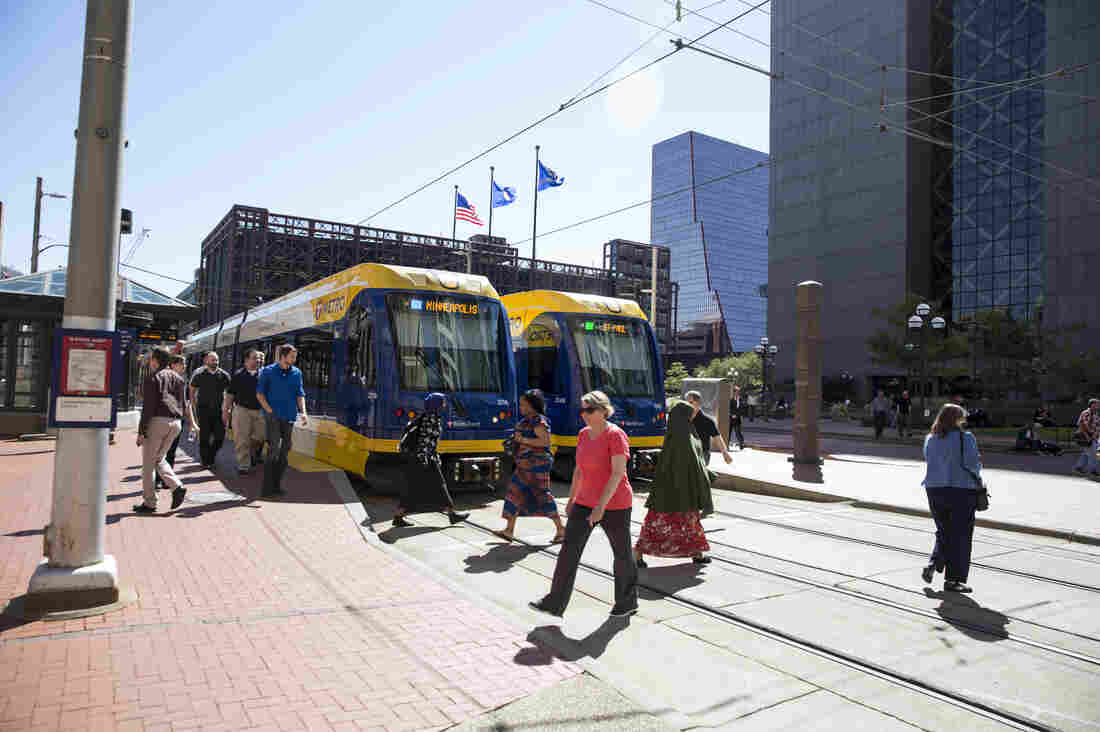 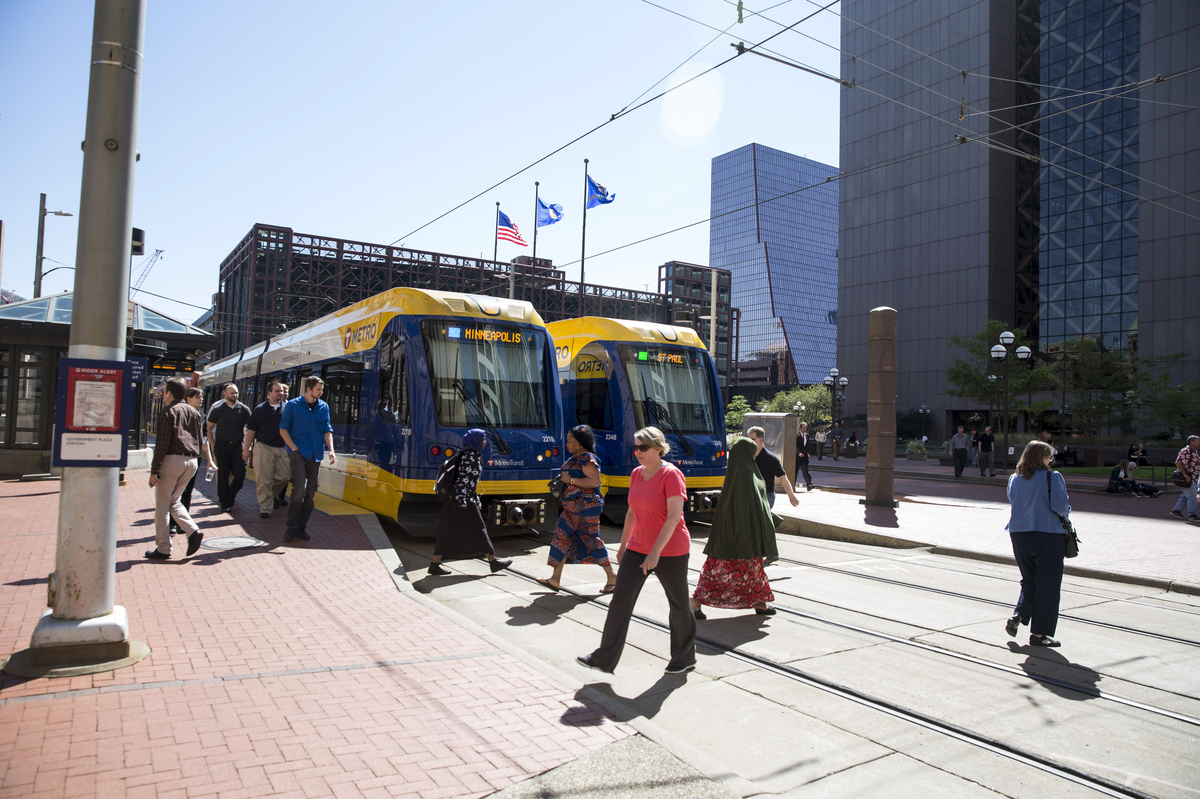 The light rail runs through downtown Minneapolis in September.

"I think one of the challenges we've always had with PRT is there's no pot of money where this fits well," he says. "And that's just not Minnesota, it's nationally as well."

In contrast, tax money is already allocated for things like buses and light rail.

The other problem facing PRT is that the picture of urban transit is changing: Uber and similar services already exist, and driverless cars don't appear to be far off. Sorel wonders if PRT's time has come and gone.

"The last thing you want to do is put up some track all over the place and have it just there," he says.

But there are still many, including Sorel, who believe PRT is still a viable option. The system in at West Virginia University is still running, and people there are spending money to modernize it.

But the West Virginia system, built in 1975, has not yet kickstarted a revolution in rapid transit, as its creators and backers had hoped.