Accessibility links
'Baru Cormorant' Will Catch You Unawares Seth Dickinson's fantasy debut lays out pages of loans, taxes and commodity trading for his imagined empires — which turns out to be a riveting backdrop for a brutal tale of loyalty and rebellion.

'Baru Cormorant' Will Catch You Unawares

'Baru Cormorant' Will Catch You Unawares 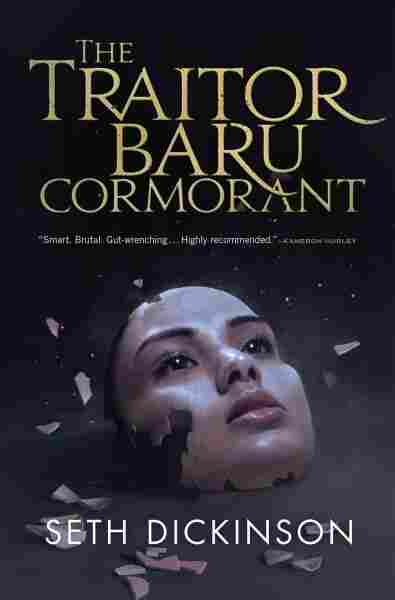 This book is a tar pit, and I mean that as a compliment.

To read The Traitor Baru Cormorant is to sink inexorably into a book that should not be anywhere near as absorbing as it is — to realize that the white-knuckled grip with which you hold it was provoked by several consecutive pages of loans, taxes and commodity trading. It seems impossible that the economics of a fantasy world should be so viscerally riveting, but they are, and it's incredible: You think you're on solid ground right up until you feel that ground closing around your throat.

So too does Baru Cormorant, our heroine, "daughter of a huntress and a blacksmith and a shield-bearer," raised in the seaside nation of Taranoke where children have several mothers and fathers in a single family. She lives happily with her mother Pinion and her fathers Salm and Solit, learning the names of birds and stars, counting everything she can find. When the Empire of Masks — called the Masquerade by those who defy it — begins trading with Taranoke, Baru's parents are wary and suspicious of the Empire's encroaching ways: Their paper money, their invasive treaties, and most especially their views on hygiene, which limit parenthood to one mother and one father only, mutilating "sodomites" and "tribadists" in punishment. But the Masquerade comes in like the tide, and Baru, young and brilliant, is singled out by an Empire agent for advancement through its new schools.

Baru's life is bifurcated: Very early on she decides that the only way to help her family and her home is to embrace the Masquerade, rise within its ranks, and fight it from within. Knowing that there is no way for her parents' spears and shields to overcome the vastness of the Empire's economic and military might, she throws herself wholeheartedly into her education, while the Empire dismantles Taranoke and its society and cultures piece by methodical piece. Deemed a savant, Baru is sent away to oversee the Empire's accounts in Aurdwynn, a far-flung feudal nation of fractious dukes and duchesses, recently conquered by the Empire and in the habit of rebelling. There, Baru learns the extent to which she can be tested and scrutinised for her abilities, her loyalties, her ethnicity, and her deeply dangerous desire for women.

The brutality of this book reshapes the landscape of what we call brutal. It's subtle and pervasive, conditioned responses instead of breaking bones. It's the brutality of emergent imperialism, of telling you the pain's for your own good, of erasing your memories and selfhood by renaming your home. It's a brutality, ultimately, of sunk costs: Baru sinks more and more of herself in payment for her ultimate goal of helping Taranoke, but her sacrifices grow sharper and more acute even as her notions of helping – and even of Taranoke as a place – grow vaguer and more diffuse. As Baru sinks, so do we, and the whirlpool symmetry of it is literally breathtaking.

And Baru Cormorant as a character is magnificent. I found it impossible not to root for her even amid horrors of her making, to grieve with her and for her at various points, to clench my fists in her defense and in desperate need for her to stay whole. There is so much to admire and so much to mourn throughout the building tragedy of this novel.

This is not a happy book. It is not an uplifting book. But it is a crucial, necessary book — a book that looks unflinchingly into the self-replicating virus of empire, asks the hardest questions, and dares to answer them.