Accessibility links
No Vanity Project: At Art Center, Baryshnikov Tells Artists, 'You're The Boss' You'd think the sign in front of dancer Mikhail Baryshnikov's arts center would have his name in lights — but actually, you can barely see it. He says what happens inside is way more important. 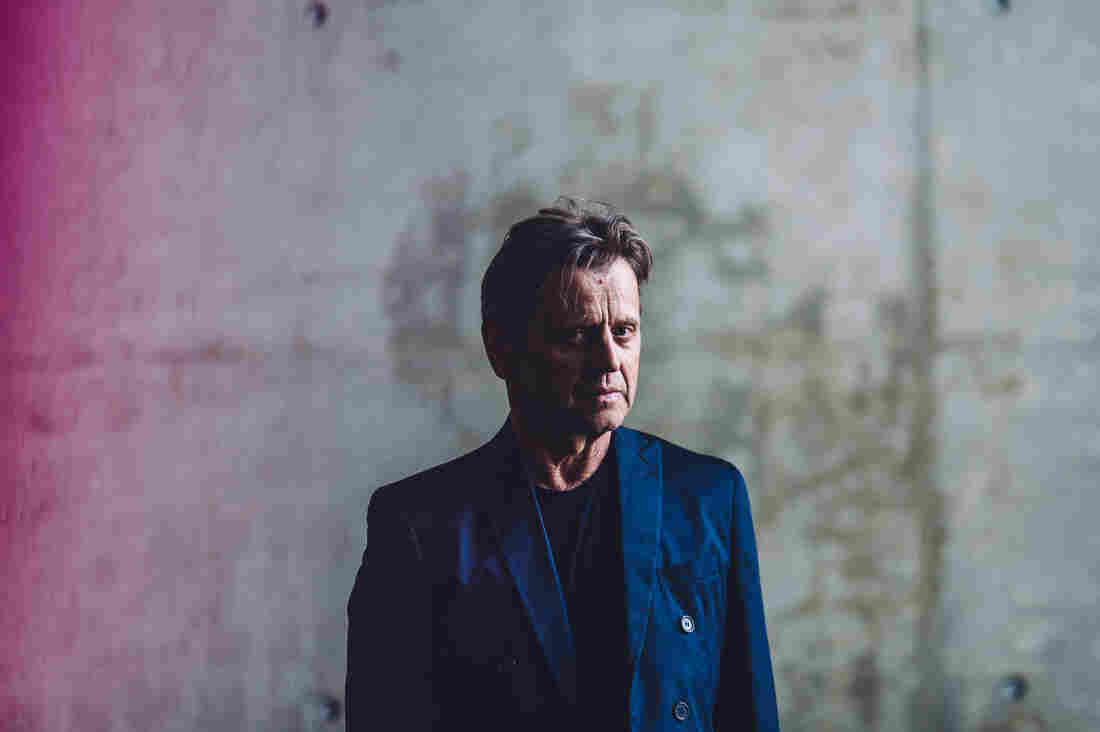 Dancer Mikhail Baryshnikov poses for a portrait at the Baryshnikov Arts Center in New York City in July. The center, a multidisciplinary practice and performance space, opened in 2005. Bryan Derballa for NPR hide caption 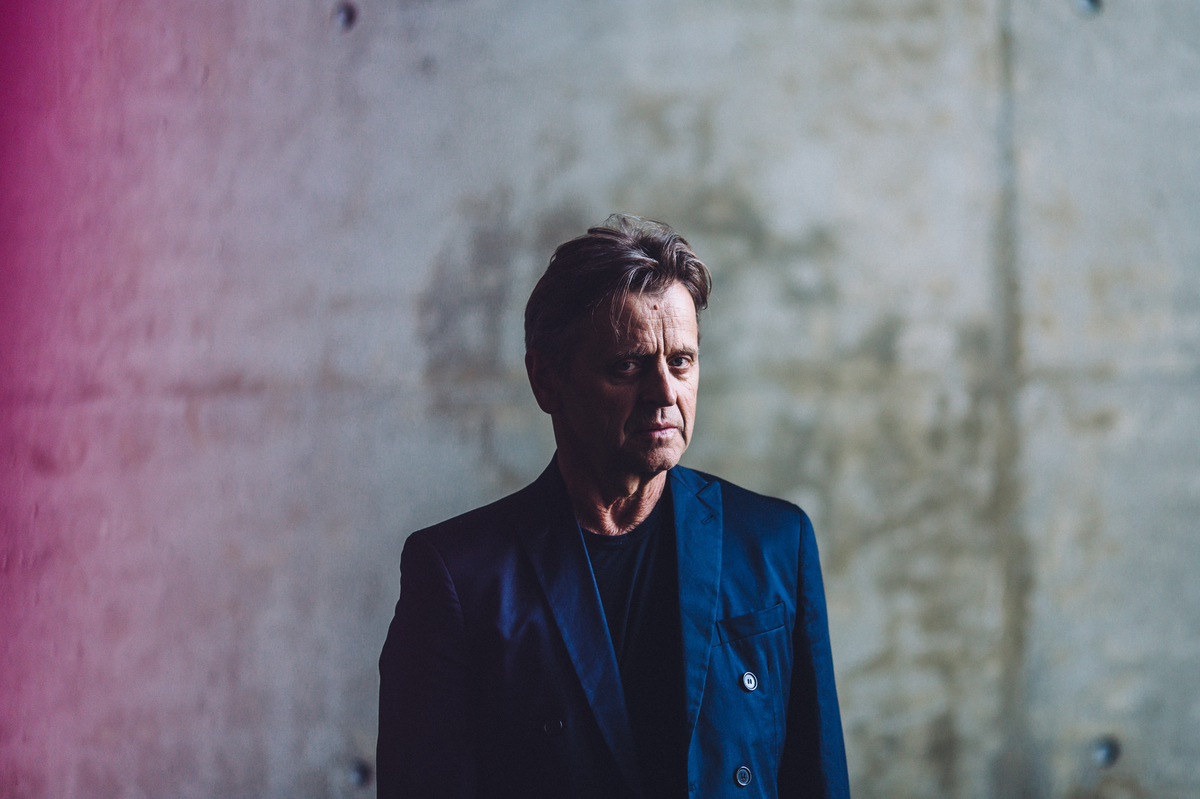 Dancer Mikhail Baryshnikov poses for a portrait at the Baryshnikov Arts Center in New York City in July. The center, a multidisciplinary practice and performance space, opened in 2005.

When Mikhail Baryshnikov says, "I'm really afraid to get bored with myself," he means it.

As one of the greatest ballet dancers in history, he's captivated audiences around the world. He was also the artistic director of American Ballet Theatre, has danced to his own heartbeat, had a run as Carrie Bradshaw's part-time lover on HBO's Sex and the City, and so much more. (His list of credits and awards is long and eclectic.)

Today, at 67, Baryshnikov is still creating art of all kinds around the world. And on Monday, a gala in New York will celebrate the 10th anniversary of the Baryshnikov Arts Center, a space he created to give artists the freedom to explore and take risks. 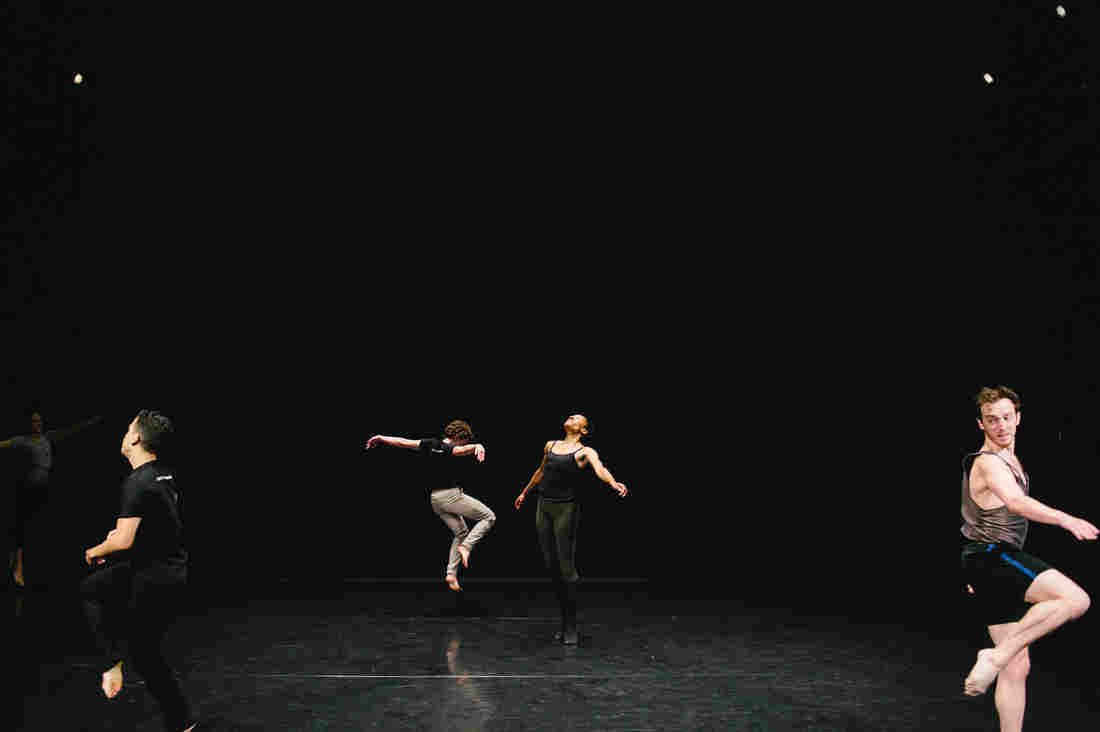 Dancers from the Dance Heginbotham company rehearse at the Baryshnikov Arts Center in July. Bryan Derballa for NPR hide caption 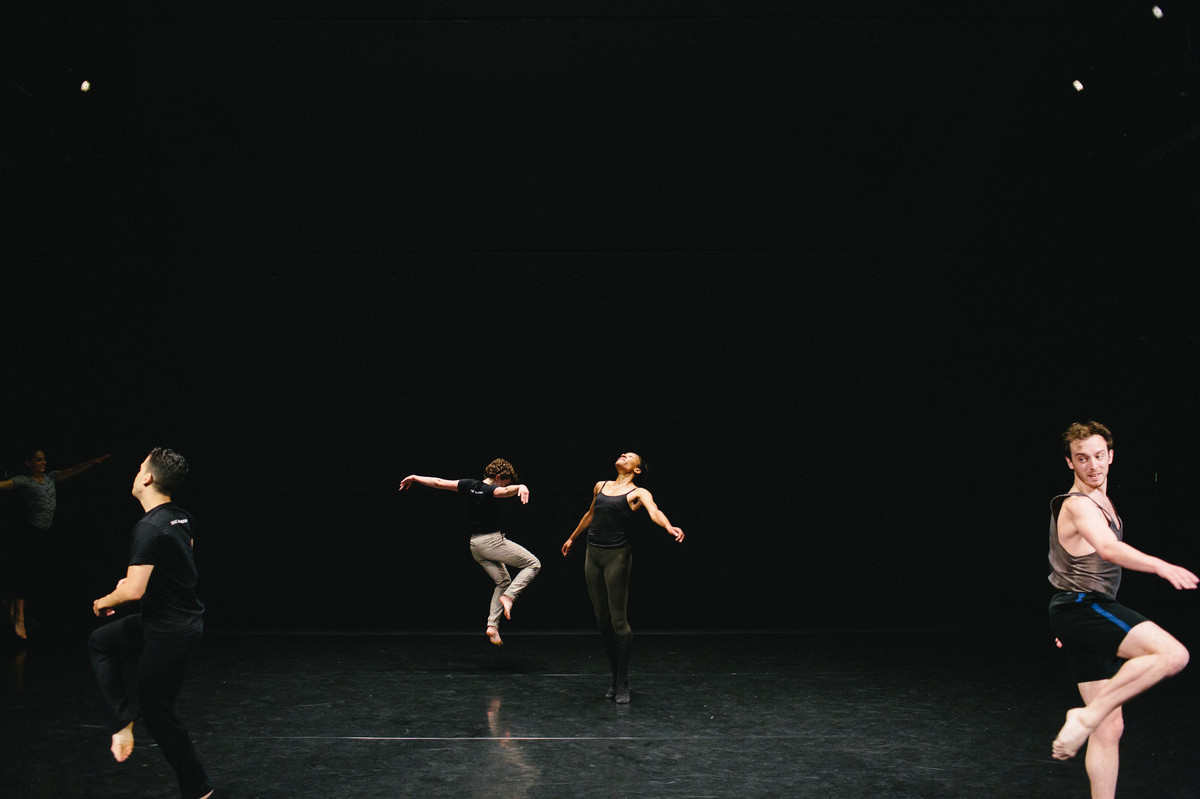 Dancers from the Dance Heginbotham company rehearse at the Baryshnikov Arts Center in July.

With such an exceptional, international career, you'd think the sign in front of his arts center would have "Baryshnikov" in lights, but actually you can barely see it. "Misha didn't want this place to be called the Baryshnikov Arts Center," says Georgiana Pickett, the center's executive director. "He wanted it to be more global, and some wise people told him, 'That's not a good idea. Let's put your name on it.' "

Baryshnikov's idea was to build a place where artists from different disciplines would come together. He had no interest in it being dance-only.

"Another dance company? Really, we are packed," he says, referring to the numerous dance companies that call New York home. If he was going to create something for artists, at the top of his list was space, light and privacy — elements, he says, that are so important to the creative process. "Art-making is not a factory, with a few exceptions, of course — you know, like Jeff Koons or Andy Warhol. It's a very slow and very fragile process. It took me 25, 30 years to really understand what actually it takes."

Baryshnikov put up $1 million of his own money to build the center. With help from a small group of donors, he bought a portion of a six-story building in New York's Hell's Kitchen neighborhood. Today, after extensive renovations, the center has two state-of-the-art theaters and four studios.

For the artists lucky enough to get a residency, it's nirvana.

'In The Middle Of Possibility'

Vocalist and songwriter Somi is rehearsing in a light-filled studio that overlooks the Hudson River. "This is such a glorious space because you've got these high windows and you're surrounded by the city," she says. "And being in the middle of New York, right, it's like you're in the middle of possibility." 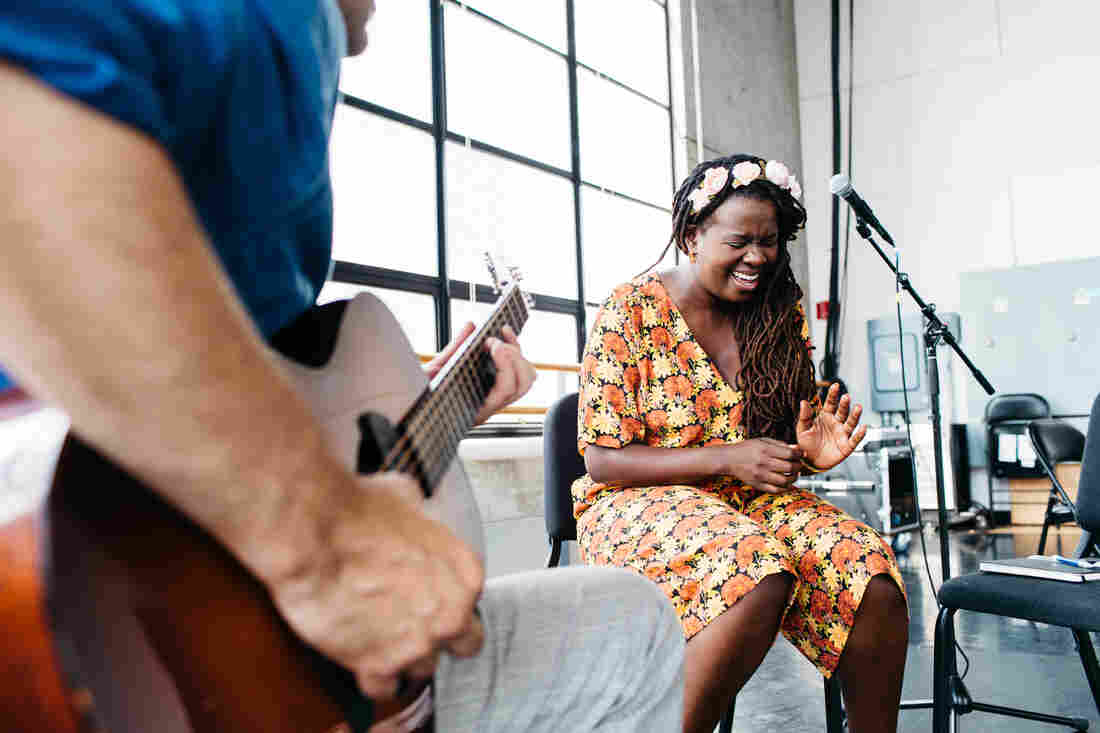 But "possibility" in the middle of New York is wildly expensive, and most artists can't afford to live in the city. Executive Director Georgiana Pickett says, "It's one of the reasons we exist ... because New York is experiencing a hemorrhaging of its cultural capital. You know, people are leaving. They can't do it anymore."

Baryshnikov is more sanguine. "It's no secret that in '70s and '80s, New York City [was a] friendlier city for younger people, and more affordable," he says. "And it's tougher and tougher."

But he believes it's still a dynamic and inspirational place to be an artist: "I really believe that, still, the magnet is right here — and not just in Manhattan, but around New York City. And still artists around the world [look] at us with a kind of envy that we are here. They want to be here at least for a few weeks at a time to practice their art."

There are also deeply personal reasons Baryshnikov chose to create something permanent in New York. When he defected from the Soviet Union in 1974, New York became home. He says the Baryshnikov Arts Center is "a kind of civic duty." 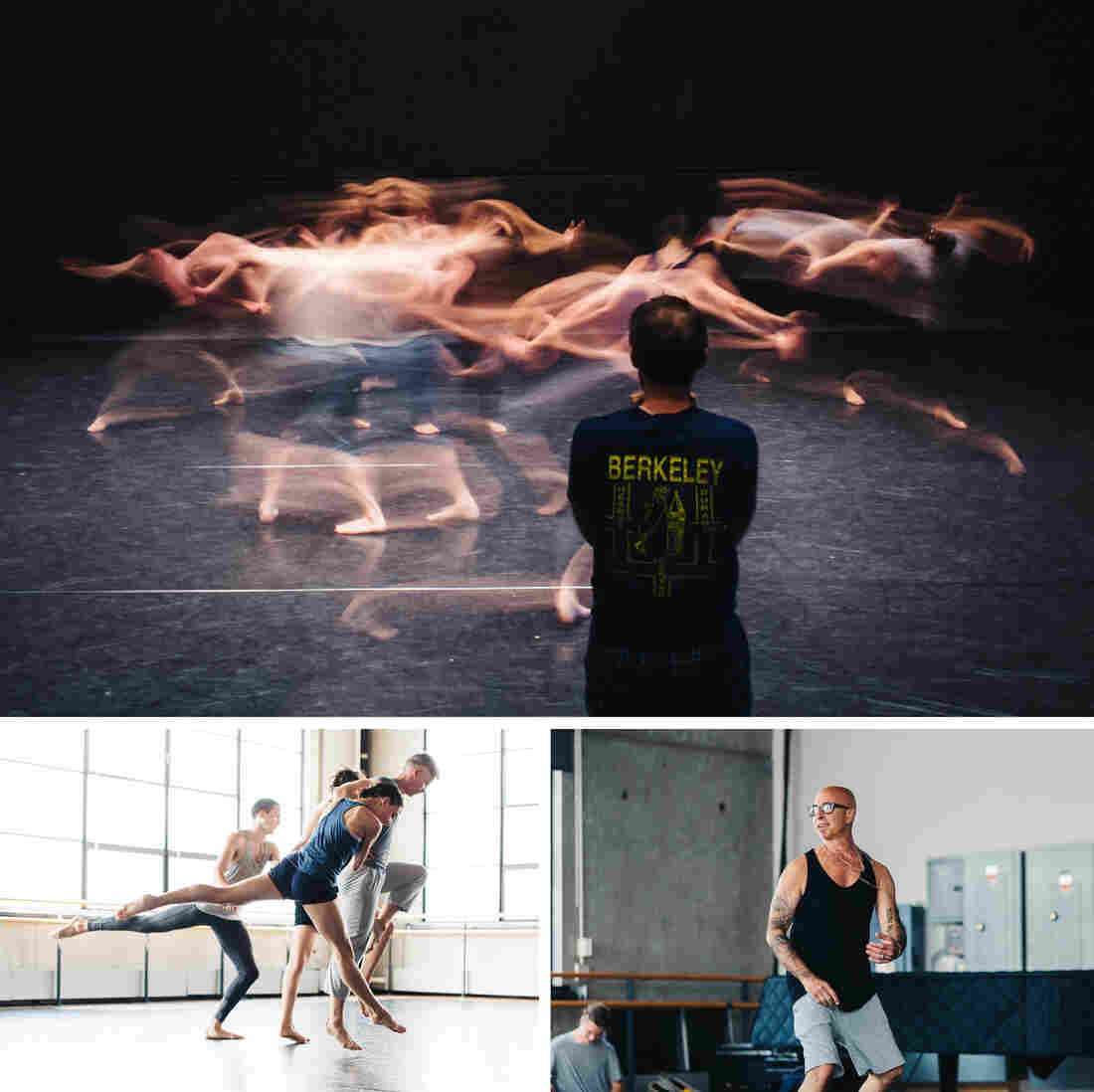 "You're the boss," Baryshnikov replies.

Heginbotham says this creative laboratory is really a gift from Baryshnikov to other artists: "He could've just been a great ballet dancer, but he is such a curious and investigative person that he has taken that and put it into creating work and helping other people create work. He betters himself all the time and he encourages us to do that too."

Building Something That Will Last

The nonprofit center generates income by renting space, fundraising and selling tickets to performances in its two theaters. Many big donors who've supported Baryshnikov throughout his career have contributed generously to the center's ambitious goals.

Rebecca Thomas, a consultant to arts nonprofits, says there's a "spotty" history of arts organizations that are closely linked to one person: Martha Graham's and Alvin Ailey's companies both struggled to adapt after their deaths. According to Thomas, "When we oftentimes see challenges is when that particular leader moves on for whatever reason, because sometimes the donors and the board members do too."

Mikhail Baryshnikov says he created his Baryshnikov Arts Center as a kind of thank-you to New York, the city that became his home after he defected from the Soviet Union in 1974. Bryan Derballa for NPR hide caption

At 67, Baryshnikov is still plenty active. He just made a stylish ad for the clothing company Rag & Bone, turning and curving his body in a kind of duet with street dancer Lil Buck, and he's touring a solo theater piece based on the writings of Russian dancer Vaslav Nijinsky.

He admits he's always been restless for new challenges. "[The] unknown, it's always much more intriguing and appealing. ... Like [a] new dish in a restaurant which you never taste or a new music composition, a new film and a new book," he says. "It's so much more interesting than [going] back to ... square one. ... Sometimes it's nice to go back, you know, but I'd rather look forward."

Maybe Mikhail Baryshnikov was right about not wanting the center he founded 10 years ago to bear his name. As he puts it, what happens inside the studio — that "fragile" art-making process — is much more important.