Accessibility links
If The Floor's A-Rockin', Just Keep A-Bouncin' Portland's Crystal Ballroom has one of the few remaining spring-loaded dance floors in the country. It's put a spring in the step of jitterbuggers, Grateful Dead fans and EDM dancers alike. 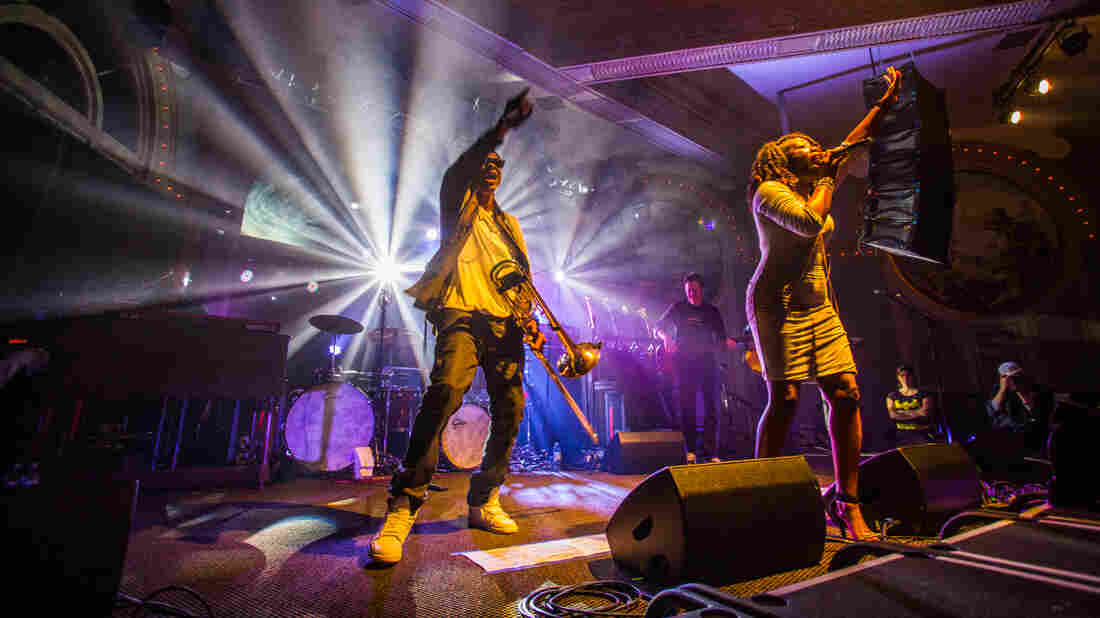 Galactic brings the bounce to Portland's Crystal Ballroom, which has one of the few remaining spring-loaded dance floors in the country. Kathleen Nyberg/Courtesy of McMenamins hide caption 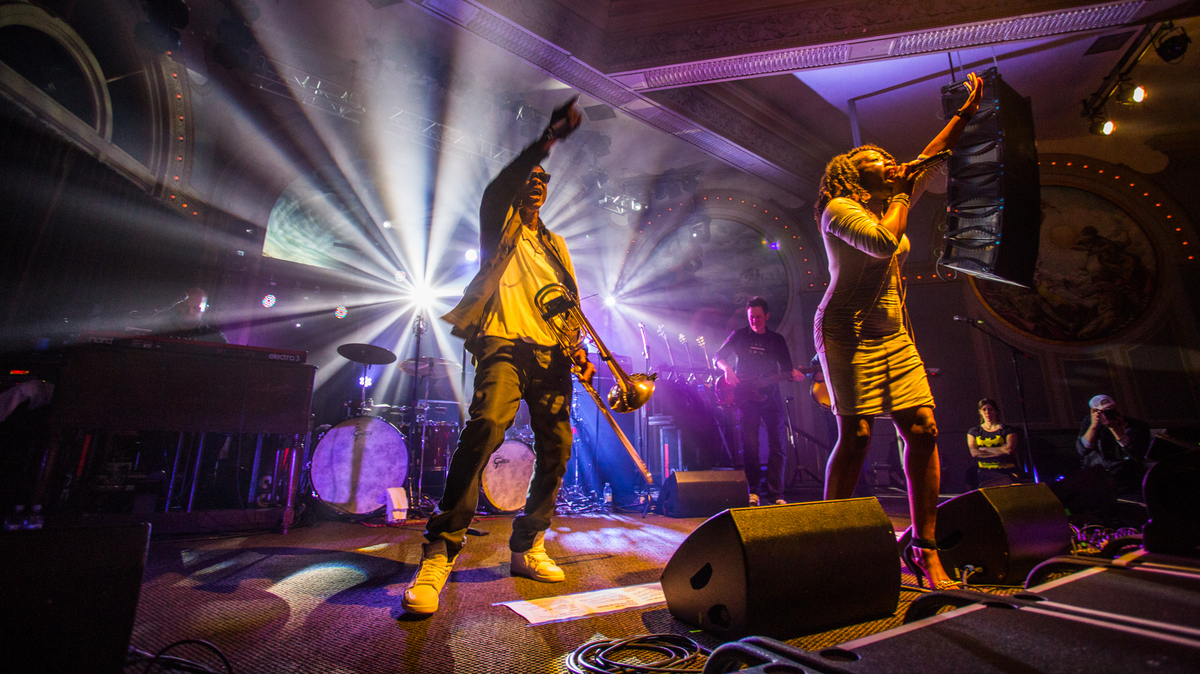 Galactic brings the bounce to Portland's Crystal Ballroom, which has one of the few remaining spring-loaded dance floors in the country.

In a town known for "keeping it weird," the Crystal Ballroom in Portland, Ore., doesn't immediately stand out. But it's got plenty of character below the surface.

The interior of this 100-year-old brick building is striking — high ceilings are accented by two gorgeous antique chandeliers, and massive arched windows line the walls. But ask concertgoers what they think the most interesting feature is and one always stands out: "I hate to say it, but the flooring," Katy Stellern says, laughing.

When the music and dancing start, the floor bounces. A lot. Zachary Carroll says he loves the sensation.

"It's like springs or tennis balls," he says. "I don't know how they make it." 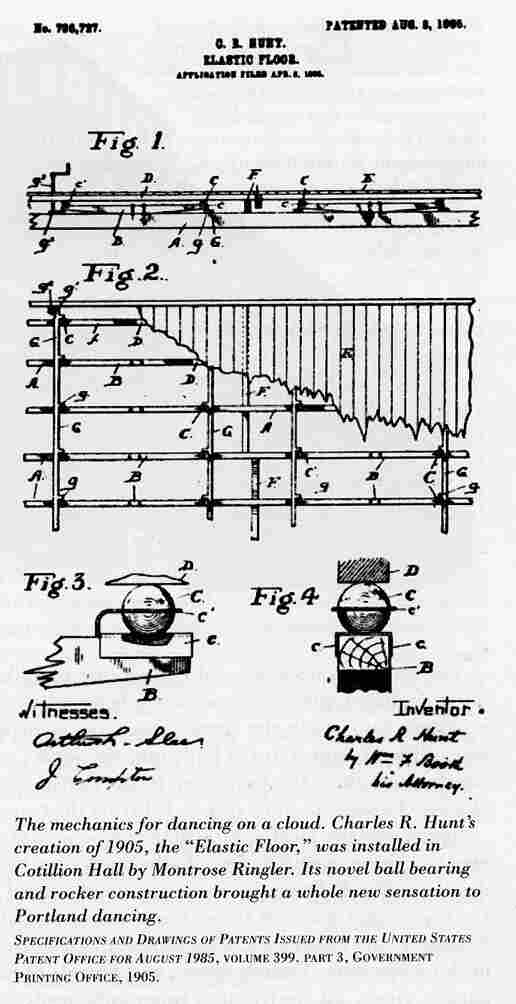 The 1905 patent for the elastic floor technology used in the Crystal Ballroom. Courtesy of McMenamins hide caption 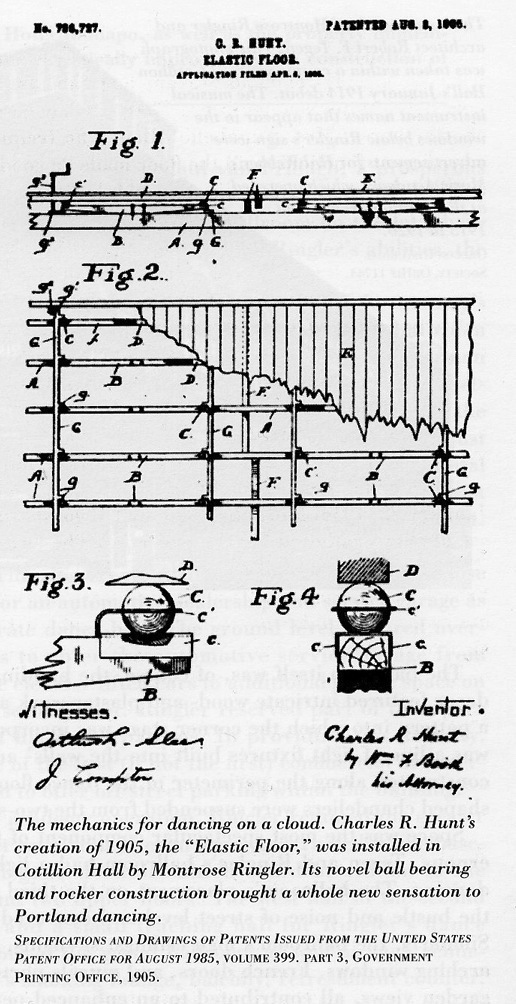 The 1905 patent for the elastic floor technology used in the Crystal Ballroom.

It's not tennis balls or springs. Walking across the maple planking, Jack Headinger, the construction superintendent who supervised the building's restoration, describes what's underneath.

"I'm going to call it rocking-chair-type members," Headinger says. "And so when you step on one part of it, it'll go down and the other part will go up. So it gives you this feeling of walking on a mattress, you might say. And then, when you get 1,500 people in here dancing, this whole place starts moving."

Floating dance floors were fairly common during the early part of the 20th century, and some of them are still in use elsewhere. But most use springs to achieve the floating sensation, and virtually none of them have dealt with the wear and tear that the Crystal Ballroom has experienced. According to historian Tim Hills, the floor is part of the original structure from 1914.

"And its design is so simple, but it's ingenious," Hills says. "And around the perimeter of the floor are these ratchet holes where you can change the tension of the floor depending on what dance you wanted to do. I mean, it was just incredible."

The unusual rocker-and-ball-bearing design, patented by Charles R. Hunt in 1905, was originally intended for ballroom dancing. However, jazz dances quickly became the hall's main source of income in the early 1920s, much to the chagrin of local authorities who deemed the new music and moves indecent.

"The city fathers and parents, they couldn't control it," Hills says. "They couldn't regulate it, and the controversy and the tension came to a breaking point."

The city of Portland banned lewd dances and appointed a dance-hall inspector who shut down the shows. In the following decades, the Crystal Ballroom mostly featured old-time dances until the late 1950s, when financial difficulties and pragmatic ownership forced the venue to accommodate new events like college dances and R&B shows.

"What's fascinating about the Crystal Ballroom's history is [that] it was around long enough that it saw history repeat itself by the time you get to the 1960s," Hills says. "It was the same thing."

The culprit this time was psychedelic rock. With the counterculture movement in full swing, the conservative Portland city government once again shut down the venue in June 1968. It remained largely unused until 1994, when the property was purchased by McMenamins, a Portland-based entertainment company that wanted to reopen the legendary venue. That's when Jack Headinger got the call to begin work on restoring and upgrading the building. He'd gone to rock shows here when he was a teenager.

"I was just stoked," Headinger says. "In the '60s, this was the place to come. "The Grateful Dead played here, and so it was really exciting to think that we were going to recover this building, because it had been sitting unoccupied for a number of years."

In its latest incarnation, the Crystal Ballroom is a successful Portland rock venue that hosts everything from electronic dance music to country. It's a fitting rebirth.

"It's just one of those special places that has served so many people in this city since 1914 when it opened and welcomed so ... many different people of different backgrounds," Tim Hills says. "To have a building last as long as this one has and continue to flourish now — it's rare and it's important."