Accessibility links
'Gold Fame Citrus' Holds Fear In A Handful Of Dust Claire Vaye Watkins' first novel is a frighteningly believable near-future dystopia; drought has ruined the West, and two holdouts among the wreckage find their lives changed by a strange child. 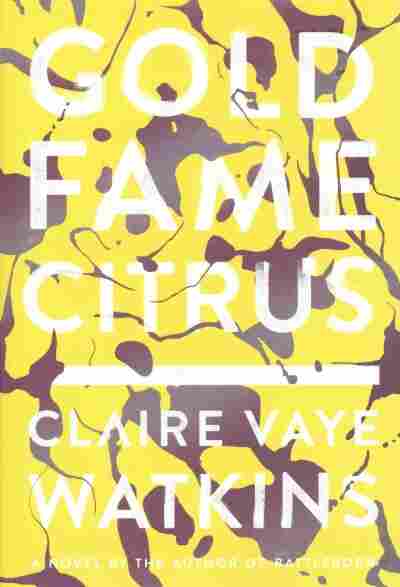 "Your people came here looking for something better. Gold, fame, citrus. Mirage. They were feckless, yeah? Schemers. That's why no one wants them now. Mojavs."

That's Ray, talking to Luz, on the day they first met, explaining the draw of California, the curse of it. What drew down generations of wanderers and seekers and, eventually, brought the world to what it is today.

Or tomorrow, really. Maybe the day after. Because that's when Claire Vaye Watkins' new dystopia-du-jour novel, Gold Fame Citrus, is set: Just over a too-near horizon where everything is drought and lack and death. Where the water is gone and the people are gone and the southwest has become a wild, weird, rolling apocalypse that, sure, is a fiction today but might be history by next year.

Luz and Ray and Ray and Luz — the former model with her bad memories and hatbox full of cash and the AWOL soldier-turned-surfer wracked by nightmares. They're the ones who stuck, refusing evac, dodging the law, living in the "laurelless canyon," in a former million-dollar mansion of some forgotten starlet. Luz spends all day trying on left-behind dresses from the cavernous closets. Ray is building a half-pipe in the backyard because the bone-dry pool isn't suitable for skating.

They don't want to run. To be evacuated to Connecticut or Pennsylvania or the greener east. And they're not the only ones. A ragged society of dribs and dregs has remained behind in Los Angeles. The illegal, the broken — those too weird or too wanted to face scrutiny from the National Guard, too useless for Washington or Oregon, where the borders are patrolled by armed men and no Mojavs are welcome; those who are having too much fun watching the world burn. Luz and Ray are all of those things put together — a species uniquely suited to scraping through the apocalypse.

But then one day, at a bonfire party down in the berms and culverts, they see a child being taken care of (poorly) by a gang of drunken teenaged gutter punks. A toddler. Two years old maybe. Neglected in a filthy sagging diaper, knowing no other world than this desiccated one. So they kidnap it.

It's one of those things that seems like a good idea at the time.

The baby is called Ig. Luz and Ray have nothing to offer her but their love, their enthusiasm at the thought of life that is not their life, their ridiculous attempts at protection. They use maxi pads and a hundred of the starlet's silk Hermes scarves as diapers. Arrange her modular furniture into a playpen. Give Ig a taxidermied turtle to play with. All of it is goofy and beautiful and heartbreaking, even when Luz and Ray decide that their life of ration colas, bottles of capers and boxes of crackers scavenged from the starlet's pantry is no longer enough. Ig needs more, and the two of them set off into the wild.

Watkins' vision — not just of a world broken by ecological disaster, but of the sorts of people who would thrive in that world — is mercilessly sharp.

At which point post-apocalyptic L.A. suddenly feels like civilization. Feels like a safe place that they are leaving behind with a child and a dream of finding a green and better world that will have them. After all, there were blueberries in L.A. (even if they cost $200 for a handful and tasted terrible). A roof. All those scarves.

When Luz and Ray strike out, Watkins' world opens, becomes more shattering, more starkly beautiful, exponentially more deadly. Gold Fame Citrus is a dreamy story with a mystical streak and a core of juvenile irresponsibility that does not go unpunished. But Watkins' vision — not just of a world broken by ecological disaster, but of the sorts of people who would thrive in that world — is mercilessly sharp. She's got a knife eye for details, a vicious talent for cutting to the throbbing vein of animal strangeness that scratches inside all of us. Religious fanatics, doomsday prophets, survivalists — they make their way on the ragged edges of the Dune Sea, the new dustbowl. Luz and Ray and Ig fold in among these groups, break away, pass by. They are our witnesses to the new world, to this slow apocalypse becoming.

And if what they say is true, that all our disposable dystopias are just thinly-disguised fantasies — safe playgrounds (without jobs, without bills, without calls to return or soccer games to attend) into which we can imagine our best or worst selves — then Watkins's fantasy is a particularly dark one.

And last, because not everyone we love is going to make it out alive.