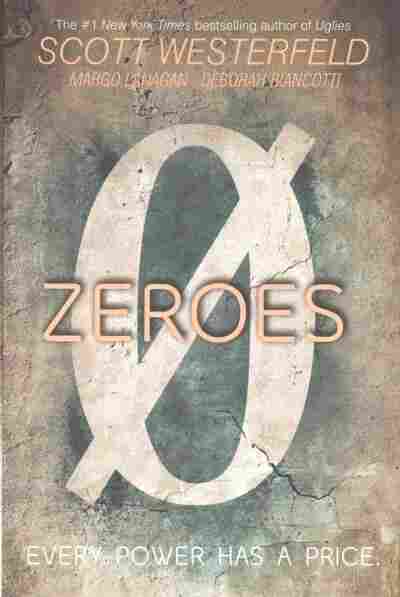 Marvel Comics elder statesman Stan Lee is widely credited as the first successful writer to understand that while superhero stories are power fantasies, they're more relatable and appealing if they come with a hefty dose of limitation as well. The characters he's credited with co-creating in the 1960s — particularly Spider-Man, the Hulk, the Fantastic Four's Thing, and the X-Men — all came with phenomenal abilities, but also with built-in angst over their inhuman bodies, the tragedies they'd failed to prevent, or their alienation from the mainstream world.

Authors Scott Westerfeld, Margo Lanagan, and Deborah Biancotti continue the trend with their first collaborative young-adult novel, Zeroes, but they focus more on weakness and frustration than on agony. Their protagonists don't suffer as much as other comics heroes, but they spend as much time wrangling faulty or uncontrollable abilities as they do facing larger problems. They call themselves "the Zeroes" as a self-effacing joke, but there's real frustration behind the label.

The worst off is Ethan, a.k.a. "Scam," whose power controls him more than he controls it. "The voice," as he thinks of it, speaks through his mouth, manipulating people into cooperating with whatever impulse is driving him. He's often surprised to hear himself saying things he had no way of knowing. But the voice only cares about his short-term feelings, not the long-term consequences. When it talks him into a particularly bad corner, involving a bag of stolen drug money and a fatal shootout, the rest of the Zeroes get involved to protect their identities. They're a fractious group: Crash, who can destroy technology with her mind; Anonymous, a boy who people forget or ignore when they aren't talking to him; Flicker, a blind girl who can see through other people's eyes; and Mob, who can direct, fuse and surf a crowd's mood. And their self-appointed leader Bellwether manipulates everyone's emotions to heighten their confidence and camaraderie — and control them for his own ends

Westerfeld, author of the Midnighters and Uglies books and 2014's Afterworlds, has already written many novels about people whose superhuman abilities come with tight strictures. Lanagan has worked more in YA romance and fairy-tale-inspired fantasy, and Biancotti in short stories in a variety of genres, but their styles fuse seamlessly in Zeroes. The authors each took charge of two characters, in a process like the shared-world system behind George R.R. Martin's long-running "real-world superhero" series Wild Cards. But while Zeroes changes its point of view every chapter, it still reads as a single cohesive story.

The approach does have issues. The six POV characters each have a private agenda, or a concern that takes a creative angle on the trouble with their powers. Anon hates his involuntary invisibility. Mob is a sensation junkie who never feels comfortable outside a group. Crash finds technology psychically painful, and has a hard time controlling the reflexive desire to mentally smash every itchy cell-phone and stinging computer in her mental range. The emotions are blunt and broad, but the rationales behind them are unique and intelligent. At the same time, the large cast and the rush to action doesn't leave enough space for character development, and some of the protagonists don't go much past a power and a problem.

But at its best, Zeroes is expansive and evocative, especially when it takes time to describe what it feels like to use or be used by a power. The rapturous scenes where Mob rides a wave of crowd energy, or Crash gives in and lets her abilities run wild, make all the drawbacks of being different seem worth the risk. Zeroes is a trilogy launch, and it openly leaves room for development that's still to come. But it also leaves room for a little joy amid the turmoil, and a sense that even limited, troublemaking supernatural abilities would be worth the hassle.