Accessibility links
Review: John Grant, 'Grey Tickles, Black Pressure' Has there been a funnier, or more fun, album about depression? You could wrack your brain trying to remember the last time you felt this good hearing someone feel so bad. 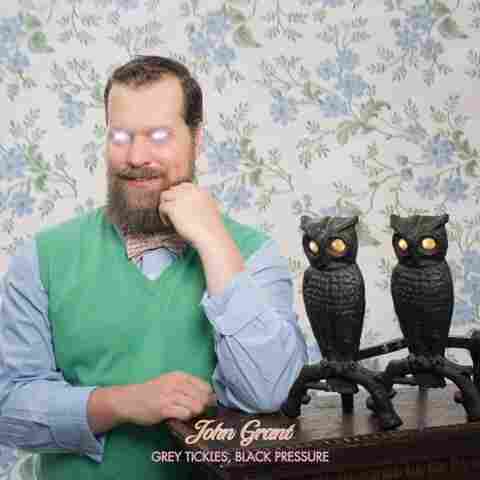 Has there been a funnier, or more fun, album about depression than John Grant's Grey Tickles, Black Pressure? You could wrack your brain trying to remember the last time you felt this good hearing someone feel so bad. Or you could skip that step and give in to the record's intoxicating mix of gallows humor, smart pop-culture references, lush folk-rock, vintage electronics, gorgeous melodies, and alternately hilarious and moving melancholia.

With his lovely baritone raising itself — or lowering itself, really — to mellifluous plateaus, it's not always easy to tell whether Grant is being dead-serious or deadpan. The answer, quite often in these songs, is both at once; he's rarely more than a few lines away from a witty aside or an earnest emotional knockout. He's explained the semi-color-coded album title: "'Grey tickles' is a direct translation in Icelandic for midlife crisis, and 'black pressure' is Turkish for nightmare." Could there be any greater promise that an album will turn out to be an absolute gas? But if you love classic rock, Eurodisco or Oscar Wilde — and let's hope that covers everybody — it's a dark cloud worth scooting to get under.

The brooding title song is pure old-school FM singer-songwriter stuff, as Grant catalogs his miseries and then tries to place them in the context of the bigger picture. He alludes, sarcastically, to his HIV-positive status ("I can't believe I missed New York during the '70s / I could have gotten a head start in the world of disease"), then reminds himself that he's doing pretty well compared to some ("There are children who have cancer, and so all bets are off / 'Cause I can't compete with that"). He's sick about the Middle East, too, and the state of architecture, and reaches his boiling point amid mellow-gold tones: "They say let go, let go, let go, you must learn to let go! / If I hear that f---ing phrase again, this baby's gonna blow," he sings, before referencing "my favorite scene in Scanners."

Things don't go kaboom, exactly, but they do pick up in the next few tracks, as Grant takes up a form of electronica that sounds less like EDM than every startling Moog sound you didn't realize you'd missed from '70s rock or early-'80s New Romanticism. In the weirdly funky "Snug Slacks," Grant speak-sings in the tones of a smooth operator as he tries out some of the most awkward pickup lines ever ("Do you think that life is easier / When one looks as good as you do / Or do people always say that you're a narcissist?"). "Guess How I Know" and "You And Him" are delightfully catchy electro-rockers that let you imagine what Nine Inch Nails might sound like if Trent Reznor had enough of a sense of humor to write about "a crazy scene at the Dairy Queen."

Grant does let up on the synths and pop-rock chants long enough to get back to the bleak stuff, occasionally allowing himself to be overtly earnest for the length of a song. The acoustic strumming of "Down Here" makes a pretty bed for what seems to be Grant's rebuke to his upbringing in Colorado: "What we got down here is / Oceans of longing, and guessing games / And no guarantees... And all we're doing is learning how to die." "Black Blizzard" answers the musical question: What if Gary Numan came up with a thoroughly depressing — yet weirdly ear-tickling — synth-pop song about the Dust Bowl? The sumptuous orchestration of "No More Tangles" and "Geraldine" recalls a time when other rockers struggled with becoming comfortably numb.

There are no laughs to be found in the album's most haunting song, "Magma Arrives." The title figure would seem to be a now-obscure villain from the Spider-Man comics, only now, instead of running around with a canister of molten lava on his back, he shows up at the bedside of a doomed man to "fill our hero's veins with shame." If you know Grant's backstory at all — growing up gay in an unwelcoming environment, followed by years of addiction — hearing shame evoked in such fatalistic, metaphorical terms would be chilling enough, even before he throws in the heartbreaking chord progressions.

Still, Grant finds ways to put the "fun" in "funereal." Grey Tickles does include two utterly life-affirming tracks. "Disappointing," a duet with Everything But The Girl's Tracey Thorn, paints every wonderful thing in life as a relative letdown compared to that significant other. And the funked-up "Voodoo Doll" has Grant thinking of a friend who's so depressed he can't get out of bed and "making a voodoo doll of you / Then I gave it some chicken soup... / Did you feel how your blues went away and died?" By the time Grant puts a corduroy jumpsuit on his sad friend's proxy, the blues are hard to come by.

Even in the songs where Grant is the despondent one, there's a saving sense of drollery. The stream of pop-culture and high-culture references may seem arbitrary at first blush, but it becomes a common, comforting bed for the singer and listeners to lie in. Among the lyrical name-checks here: Cujo, Ordinary People, "The Monkey's Paw," Moby-Dick, Heavy Metal Parking Lot, Orson Welles, Geraldine Page, Joan Baez, the singer Joan As Police Woman, Angie Dickinson, Prokofiev, Madeline Kahn and the women of Saturday Night Live ("Gilda, Kristen, Cheri, Tina, Amy and Rachel Dratch").

Even the album's last line references a movie: "Don't walk into the light / It's a trap, dear Carol Anne." That little girl from Poltergeist should surely agree that it's much more beguiling to stay here in the grey and the black with Grant.