Accessibility links
Now Is Not The Time For Realistic Fiction, Says Margaret Atwood The celebrated Canadian author has a new book out, The Heart Goes Last, that began as an experimental digital serial. It's a wacky dystopian satire on economic decline and the private prison industry. 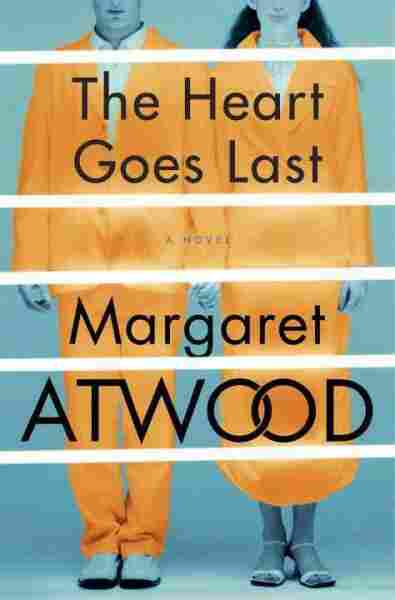 Writer Margaret Atwood says she'll try anything once. That spirit of adventure — coupled with her curiosity about the intersection of storytelling and new technology — led her to write a serialized book for the digital publisher Byliner. That book, The Heart Goes Last, is out now in a physical edition.

It's a hard book to define, even for its author. Is it a satire? Is it a parody? Dystopian fiction comes close, though Atwood says wryly, "any fiction that shows a society which is worse than your own is dystopian." In truth, she adds, "I think I'm just writing reality as it is unfolding."

It has to be said, The Heart Goes Last is a strange version of reality, complete with sex robots, Elvis imitators and a beautiful woman who falls madly in love with a teddy bear. But we're getting ahead of ourselves — the book begins in the not too distant past, "roughly parts of the Northeast in 2008, when there was a big financial meltdown involving people's mortgages getting foreclosed and a lot of them ended up on the street, or living in their cars," Atwood says.

And that is exactly where young couple Stan and Charmaine find themselves after losing their jobs and their home. They have to scrounge for food and are constantly threatened by roving gangs of criminals trying to steal their car and their few possessions. Then, Charmaine sees a commercial for Positron — it's a social experiment that promises a return to full employment and middle class life, in an idyllic 1950s style town called Consilience. The only problem is, you have to spend half your life in prison.

"Half of the population spends a month in the prison while the rest of the population is acting as guards and town support people," Atwood says. "Then, on changeover day they switch places, so those who have been prisoners come out and act the civilian roles, and those who have been acting those roles go into the prison. Not only that, they get to time share the houses."

In Margaret Atwood's Latest, The Past Is Powerfully Present

Once you move to Consilience, you can never leave. But, as Atwood points out, the project entices people with the promise of a comfortable life and a common purpose — clean sheets, a tidy yard, a meaningful life.

The Heart Goes Last skewers a culture that trades freedom for creature comforts and views prison as a vehicle for profit. Atwood says she was interested in writing about a for-profit prison scheme for one simple reason, "because it's happening and it has a long history of happening. So it goes all the way back to pre-modern times, say the ancient Greek and Roman world. The energy source in that world was slaves, and you could get to be a slave in various ways — but one of those ways was getting convicted of a criminal offense."

It doesn't take long to realize that something quite dark is happening in the pristine prison where residents spend half their lives. And it doesn't take long for the time sharing arrangement to fall apart and veer wildly into sexual escapades and a bizarre escape plot that leads to Las Vegas — which is where the Elvis impersonators come in. Some readers may find these turns jarring — one reviewer called the book "a silly mess." But novelist Mat Johnson disagrees.

"When I read Atwood, I kind of enjoy the process of giving up my footing because one of her greatest gifts is unsettling the reader," he says. Johnson reviewed The Heart Goes Last for The New York Times. At first he thought the book's beginnings as a serialized novel might explain the change in tone half way through. But, he says, he realized it's just Atwood being Atwood.

"I think you have to approach a book like this and say, not what do I need this to be and is it fulfilling my preconceived notions, but what interesting things are happening here. It changes dramatically over the stretch of the book and I love that! Like, I love the surprise of her work and I love that she's going in these different directions. At the same time, the themes are not all over the place."

For her part, Atwood says this is not the time for realistic fiction — and it's no coincidence that dystopia and fantasy are on the rise now. "I think they're coming out of people's feeling that things are going haywire, and you cannot depend on a stable background for 'realistic fiction.' And when there's perceived instability that's happening you can't write that kind of novel and have people believe it."

At 75, Margaret Atwood is still plunging ahead fearlessly into terrain that few writers would dare to enter. "Writing is just fun for me." she says — and at this point in her life, it's obvious she believes that literary risks are well worth taking.