Accessibility links
'M Train' Is A Poetic Journey Through Life And Loss Patti Smith's new memoir is a dreamy, elegiac recollection of loved ones gone too soon, energized by her interests and travels. It jumps in time, from her husband's death in 1994 to Hurricane Sandy. 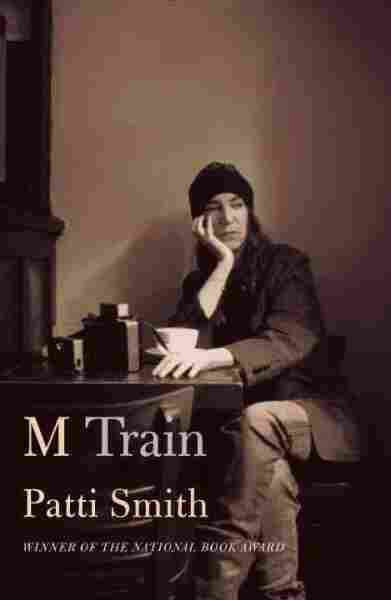 Patti Smith is a survivor whose dreams prod her to "redeem the lost" by writing about them with "some sliver of personal revelation." In Just Kids, her 2010 National Book Award-winning memoir about her relationship with Robert Mapplethorpe, she rued the loss of so many friends and colleagues to drugs, suicide, cancer, AIDS and "misadventure." (Mapplethorpe, whom she memorably called "the blue star in the constellation of my personal cosmology," succumbed to AIDS in 1989.)

Smith's latest memoir, M Train, again evokes people who died far too young, including — most devastatingly — her husband Fred "Sonic" Smith, who died at age 45 in 1994, and her brother, Todd, who died exactly one month later. More than two decades have passed, yet the absences remain acute enough to bring tears on a flight to Tokyo, when an actor in an inflight movie reminds her of Fred. "Just come back, I was thinking," she writes. "You've been gone long enough. Just come back. I will stop traveling; I will wash your clothes."

Unlike the relatively straightforward, chronological narrative of Just Kids, M Train drifts fluidly between a fugue state of memories, dreams, and a largely solitary present. The tone is elegiac, melancholic, and meditative, filled with wistful flashbacks and haunting Polaroid snapshots — including many of Fred, whom she calls "my human angel from Detroit." Smith wonders, "If I write about the past as I simultaneously dwell in the present am I still in real time?"

But M Train — which takes its title from the subway line near Smith's Greenwich Village home — is also energized by her keen interests and obsessions. These include her passion for coffee and her beloved neighborhood cafes, where she writes on scraps of napkins; a rundown property she buys near the beach in Far Rockaway, Queens, just weeks before Hurricane Sandy devastates the area in October, 2012; television detective mysteries, which she binge-watches; and Haruki Murakami's The Wind-up Bird Chronicle.

She keeps moving, jetting around the world for performances and conferences as well as far-flung pilgrimages to the graves of artistic heroes, many of whom also died prematurely — often by their own hands. These abiding sources of inspiration include Roberto Bolaño, Frida Kahlo, Sylvia Plath, and several Japanese writers and filmmakers. Her description of Plath merits being carved in stone: "A poet with hair worthy of a Breck commercial and the incisive observational powers of a female surgeon cutting out her own heart."

The book's present spans the year before and after Hurricane Sandy, when Smith finds herself in "a light yet lingering malaise. Not a depression, more like a fascination for melancholia, which I turn in my hand as if it were a small planet, streaked in shadow, impossibly blue." Trips to Mexico, Germany, and Japan galvanize her, while dreams color her landscape. "Tell a dream, lose a reader," Henry James famously warned. Smith spends a lot of time in the land of nod, and readers may find themselves drifting off occasionally. But then she reels us back in with a fresh wonder. In a recurrent dream, a mysterious cowpoke (who could have stepped out of a play by her long-ago lover, Sam Shepard) warns her that "It's not so easy writing about nothing."

Smith never writes about nothing. She writes about her married life in Michigan, "An era of small pleasures. When a pear appeared on the branch of a tree and fell before my feet and sustained me." She writes about the challenges of writing, and about how images "have their way of dissolving and then abruptly returning, pulling along the joy and pain attached to them like tin cans rattling from the back of an old-fashioned wedding vehicle." She writes about how losing Fred and Todd in close succession left her "numb ... dreading my own imagination ... imprisoned in ice," and how, after moving back to New York, "slowly the leaves of my life turned." She writes about her propensity for losing things, even cherished objects like a favorite black coat or Polaroid camera. And she writes — so exquisitely, "Maybe we can't draw flesh from reverie nor retrieve a dusty spur, but we can gather the dream itself and bring it back uniquely whole."