Accessibility links
Father Believes Oregon Shooting Victim Saved His Daughter's Life Lacey Scroggins, 18, was in class in Roseburg when a gunman burst in and started shooting. Her father, Randy, a pastor at New Beginnings Church of God, recounts how Lacey says she survived. 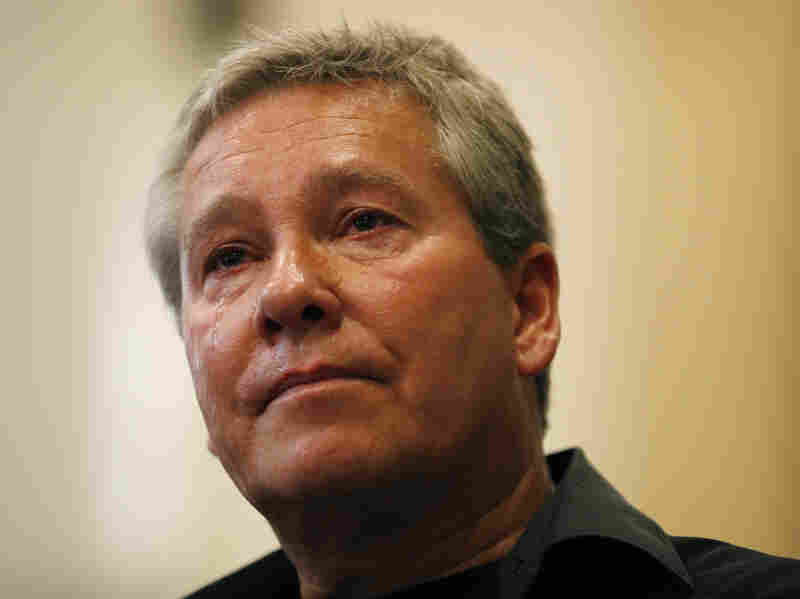 Randy Scroggins, a pastor at New Beginnings Church of God, cries as he talks about his daughter Saturday in Roseburg, Ore. Lacey, an 18-year-old student at the community college where a gunman killed nine people and himself last week, survived. John Locher/AP hide caption 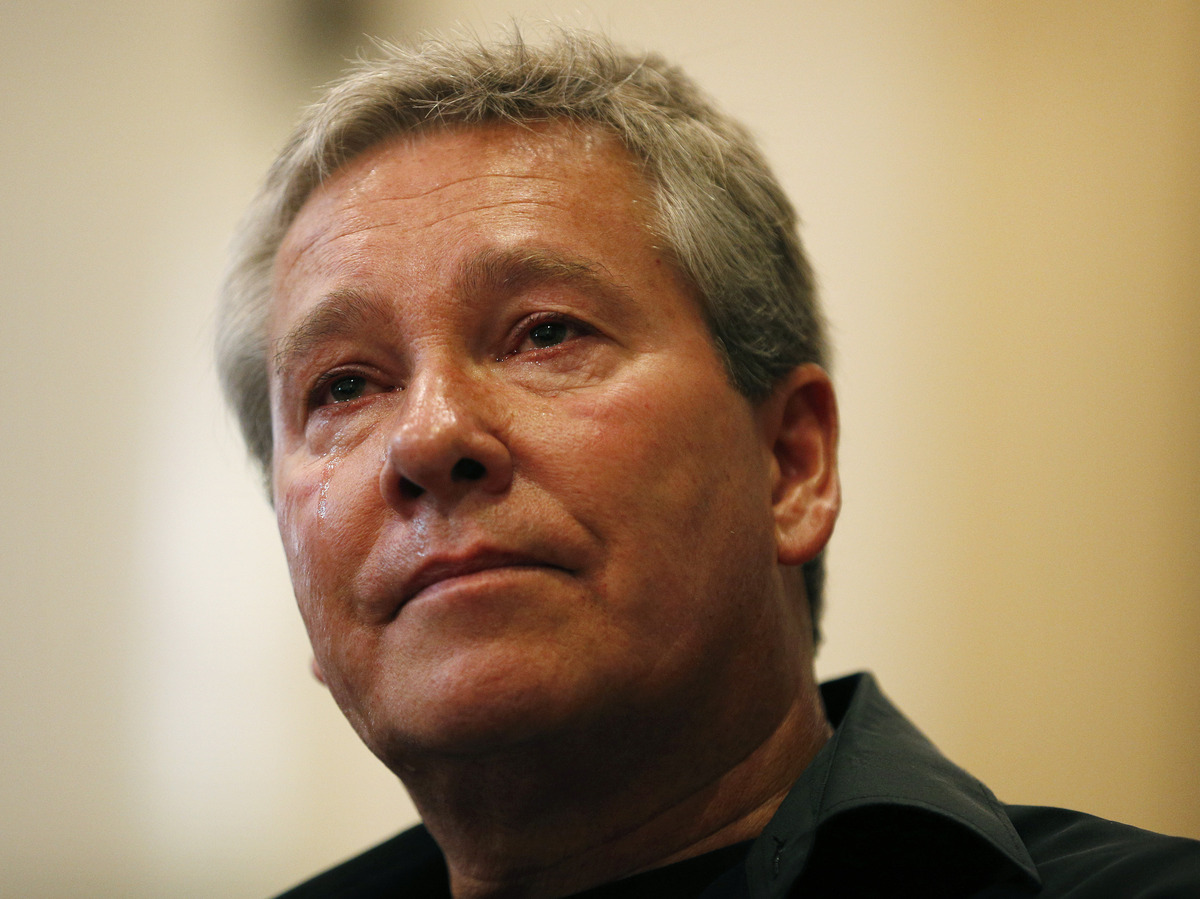 Randy Scroggins, a pastor at New Beginnings Church of God, cries as he talks about his daughter Saturday in Roseburg, Ore. Lacey, an 18-year-old student at the community college where a gunman killed nine people and himself last week, survived.

Lacey Scroggins was in a writing class last week at Umpqua Community College in Roseburg, Ore., when a man burst in and started shooting people. When it was over, 10 people, including the shooter, were dead, and Lacey was covered in blood.

She survived, and she and her family credit one of the victims for that. She wasn't ready to tell the tale herself, so she asked her father to stand in.

On Sunday, Pastor Randy Scroggins sat in the sanctuary of his New Beginnings Church of God, telling a story he said needed telling. Police agreed, and victims advocates agreed, that it's a way to help heal — not just for Lacey but also for the town of Roseburg.

He said his daughter remembers the gunman, Chris Harper-Mercer, from two days before the attack, when they were fellow students on the first day of writing class: "She said, 'Daddy, he talked a lot. It's not like he was mean. But he talked a lot, he asked questions, he answered questions.' She said he talked so much it was almost to the point of being annoying. But that was it. And the next time she seen him was when he came to execute people on Thursday."

The attack started with the pop of a gunshot from outside, a hole in the window, and suddenly the shooter was in the classroom. Scroggins said Harper-Mercer "shot a few shots in the air, and he said to everybody, 'Get down.' "

Then, Scroggins says, the gunman quickly ordered a man in an orange shirt to come forward, asked if he's a Christian and shot the person after he replied "yes." Harper-Mercer commanded another young man to come forward, but this time, according to Scroggins, the shooter said, "You're the lucky one."

Authorities have not revealed details of what's been described as a manifesto. Scroggins said the mother of the so-called "lucky one" said her son was told to sit in the back of the classroom and watch the executions — which, Scroggins said, continued after the gunman told people lying on the floor to move closer together: "They're in that prone position, their heads are down, and they move, they scurry to the center of that room. And then, Lacey said, 'Daddy, he walked to the center and just started shooting people.' "

She heard a huge bang and then felt a body ease over on top of her. It was 20-year-old Treven Anspach — one of those who died.

Scroggins said his daughter told him, " 'I looked, Dad, I looked under my hand as my face is on my hands, and I'm watching Treven's blood, and it is flowing towards me. It is all over my shirt, the side of me, my pants, my boots.'

She froze. The shooter asked another person, "Is she dead?" referring to Lacey.

The shooter stepped over Lacey and shot someone else.

"The blood of that boy, Treven, saved my daughter's life," Scroggins said. "I know it as well as I know that I'm sitting here. He will always be the Scroggins' hero, from this point forward."

Thursday's attack ended when officers exchanged gunfire with the shooter, who then committed suicide.

Scroggins said when his daughter looked up and saw the gunman on the ground, she got up and helped some of the wounded before police led her away.

He told his daughter's story calmly, with great attention to detail. But at times he was overwhelmed — like when he describes the simple act of taking her to school Thursday morning. 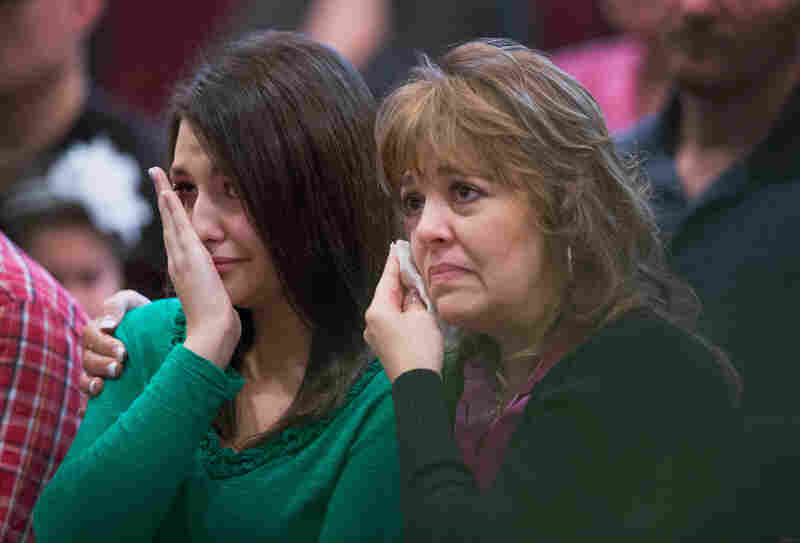 Lacey Scroggins and her mother, Lisa, listen as Lacey's father, Randy, pastor at New Beginnings Church of God, recounts in his Sunday sermon his daughter's experience during the mass shooting at Umpqua Community College in Roseburg, Ore. Lacey says she believes she survived the shooting by playing dead next to the bleeding body of fellow student Treven Anspach, who died in the shooting. Scott Olson/Getty Images hide caption 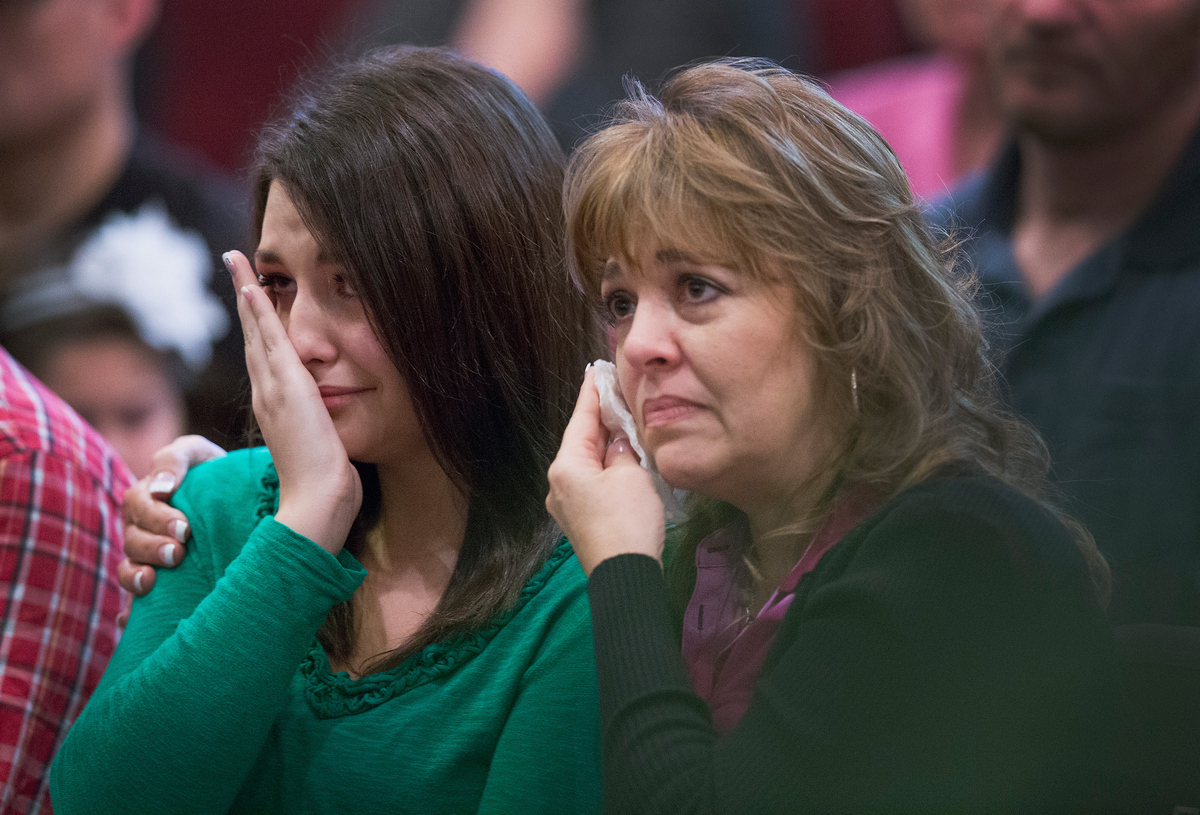 Lacey Scroggins and her mother, Lisa, listen as Lacey's father, Randy, pastor at New Beginnings Church of God, recounts in his Sunday sermon his daughter's experience during the mass shooting at Umpqua Community College in Roseburg, Ore. Lacey says she believes she survived the shooting by playing dead next to the bleeding body of fellow student Treven Anspach, who died in the shooting.

Scroggins said Lacey is trying to get on with living. This past weekend, she and her mom and a sister drove an hour north to Eugene to get their nails done. She has shared some laughs with friends and family — although Scroggins said he pays close attention to the tears and the silent moments.

He said Lacey continues to tell him her story, in pieces, until it gets to be too much. But he said there's one part of the tale she has wanted told from the beginning: "She was made a victim once by the shooter; she will not allow him to make her a victim again. She is getting back up."

Lacey Scroggins plans to enter the nursing program at Umpqua Community College. Her ultimate goal is to be a surgeon.

The UCC campus reopens Monday, but classes won't resume for a week.

Randy Scroggins said he can't say Lacey will go back to that classroom, but she'll be back at school.