Accessibility links
Univision's Jorge Ramos Discusses Journalism And That Donald Trump News Conference Mexican-born journalist Jorge Ramos moved to the U.S. in 1983. "I am glad that I came," he says. "The First Amendment has given me all the opportunities that I couldn't have in Mexico." 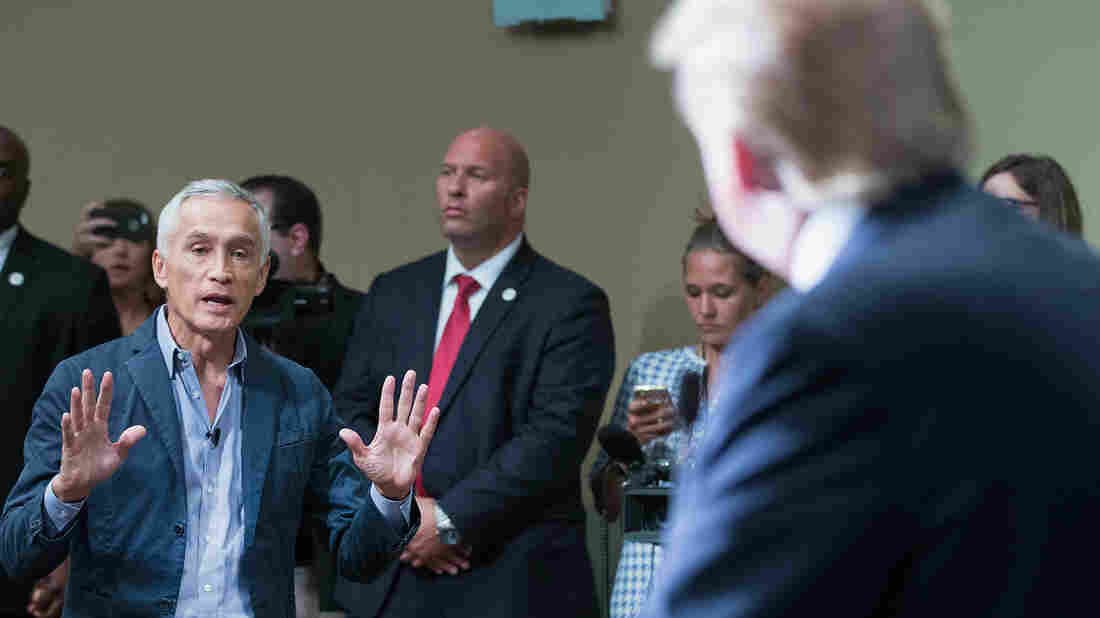 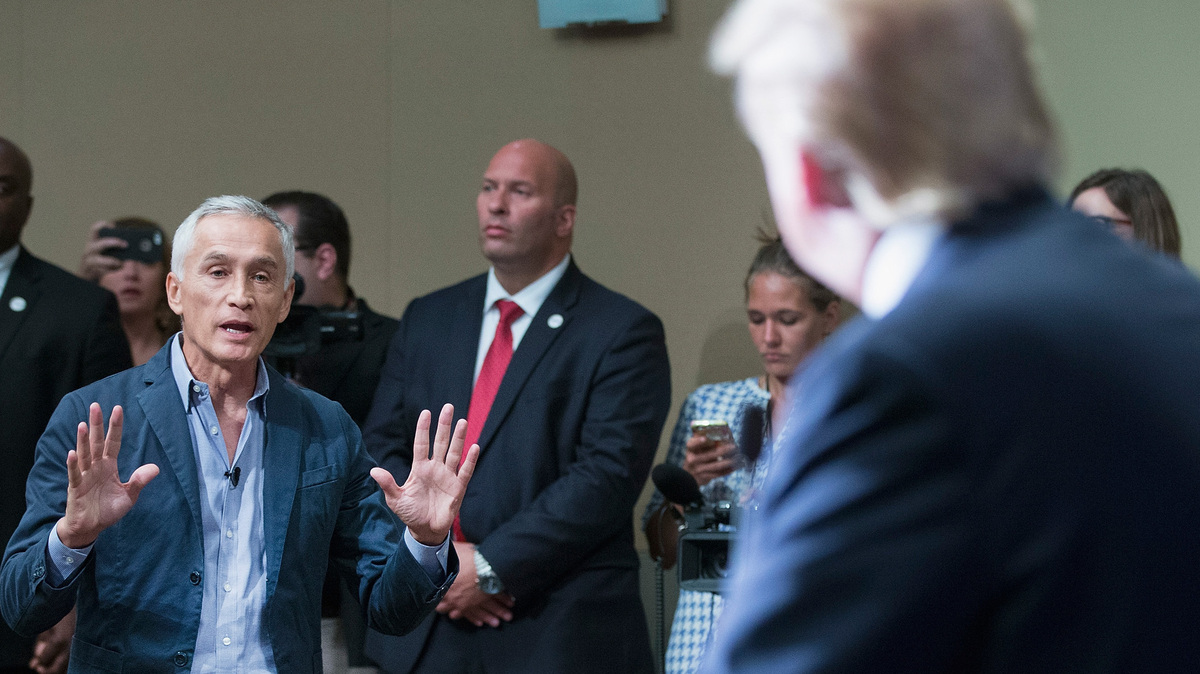 Univision anchor Jorge Ramos asks a question of presidential candidate Donald Trump during a news conference in Dubuque, Iowa, on Aug. 25. Earlier, Trump had Ramos removed from the room.

Mexican-American journalist Jorge Ramos has worked in a number of authoritarian countries, including Venezuela and Cuba, but until this summer, he had never been ejected from a news conference.

That changed on Aug. 25 in Dubuque, Iowa, when Ramos, who is the co-anchor of the evening news on Univision, attended a news conference held by presidential candidate Donald Trump. Ramos asked Trump about his proposal to deport 11 million immigrants in two years. Trump responded by telling him to "sit down" and to "go back to Univision." Trump then had his bodyguard force Ramos out of the room.

Trump said that Ramos hadn't been called on. Ramos tells Fresh Air's Terry Gross, "I raised my hand. I said, 'I have a question on immigration.' Nobody objected ... not the reporters, not Donald Trump."

Ramos was born and raised in Mexico and began his career as a journalist there. But, he says, the Mexican government often told the media what to say and what not to say. "There was direct censorship from the presidency to the mass media," he says. "I rebelled against that censorship."

In 1983 he came to the U.S. on a student visa; 25 years later he became a U.S. citizen. Ramos says, "I am glad that I came to this country because the First Amendment has given me all the opportunities that I couldn't have in Mexico."

I learned a lesson: that you should never ever, ever give your cellphone number to Donald Trump.

At that moment I knew that my life was going to change. So the first thing I had to change was my cellphone. And I learned a lesson: that you should never ever, ever give your cellphone number to Donald Trump. And after that, and I think it was a very important and ethical decision, at that precise moment we decided that we had to talk to Donald Trump either way, with an organized interview with him or to go and find him wherever he was going to be, and that's precisely what we did.

On his interaction with Trump at a news conference in August

Then Donald Trump, he doesn't apologize, but Donald Trump realized that he had made a huge mistake. It was an attack on the freedom of the press in the United States. Just imagine, I saw the news coming from many countries. One of them coming from China and coming from Cuba, and those countries were having a field day, because in those countries there is no freedom of the press. They were celebrating the fact that someone in the United States had done this incredible kind of censorship. So Donald Trump rectified, and the same bodyguard who pushed me out of the press conference had to open the door and allow me to come in.

On why he chose to leave Mexico and come to the U.S. to work in journalism

As a very young reporter I wanted to do a little criticism on the way Mexicans chose their president, in which there was no democracy. The president, in turn, would decide who was going to be the next president, and my report was completely censored, completely censored. I was very young, with a lot of ideas, and I decided to quit. I wrote a letter of resignation that I kept as a badge of honor for many years. And I quit. I sold my car. ... and I got about $2,000 and I applied to UCLA extension in Los Angeles, I got accepted and then I moved to this country. So I was directly affected by censorship, and I didn't want to be a censored journalist in Mexico. ... And you know what has happened in Mexico in the last 10 years, for instance, more than 80 journalists have been killed.

On the authoritarian society he grew up in in Mexico

We are talking about a very authoritarian regime back then in Mexico until the year 2000, so there were three elements in which authority were imposed for you as a kid: first, your father. He would tell you exactly what to do, what to eat, when to go, when to watch TV. Then it was the church. I went to Catholic school and the priest back then would not only punish you physically, hitting you on the hands and pulling your hair and torturing you with ideas that you would go to hell, and then, of course, the political system, which was incredibly authoritarian. There was no democracy, and so you would have your father, the Catholic Church and an authoritarian regime imposing ideas on you.

Donald Trump Escalates His Fight With The Media

Donald Trump Escalates His Fight With The Media