Fan Fiction Comes To Life In 'Carry On'

Fan Fiction Comes To Life In 'Carry On' 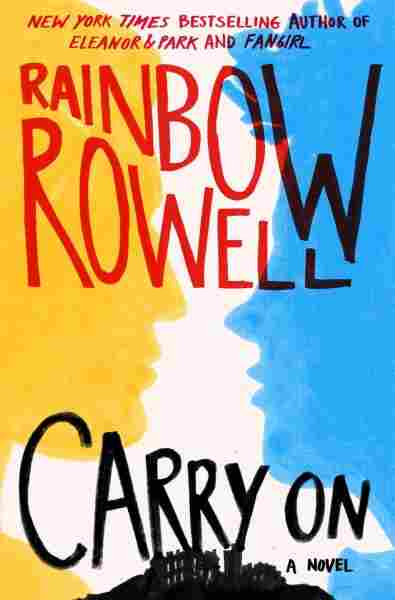 The Rise and Fall of Simon Snow

In preparing for this review I found myself searching for the opposite of "meta" — something that would mean below as well as above. Because in Carry On, Rainbow Rowell has written the book inside her other book, which was inspired by books outside her book, and it would be nice to have precise terminology to discuss such literary nesting dolls. In the absence of that terminology, I'll say — not at all facetiously — that Carry On is hands-down the best Harry Potter fan fiction I've ever read, and I've read some genuinely excellent fan fiction (shout-out to GatewayGirl's Blood Magic!).

In Fangirl, Rainbow Rowell gave us a protagonist who writes fan fiction about a magical Chosen One named Simon Snow, struggling to conclude her very popular fan work before Gemma T. Leslie's final book sets the story in canonical stone. Carry On, while a completely stand-alone novel in its own right, is also the final book in the fictional Leslie's Harry Potter-like series.

In Carry On, Simon Snow is in his final year at Watford, an elite magical school, reflecting on the past seven years of adventures and political upheaval in the world of Mages. That world is threatened by the Insidious Humdrum, a being that sucks up magic in a permanent and damaging way — and who looks exactly like Simon himself did at the age of 11, when his magical adventures began. With the help of his best friend, Penelope, his girlfriend, Agatha, and in spite of the machinations of his nemesis, Basilton Pitch, Simon usually carries the day — but in this final book, much of what has been taken for granted in Simon's life is unraveling, and he'll need all the help he can get.

As a stand-alone book separated from its context, Carry On is wildly fun, deliciously readable, immersive and compulsive as good fan fiction is. It has a magic system that's all elegant simplicity and that forms a smooth, easy background for the main event of character dialogue and interaction. As she did in Eleanor & Park, Rowell will frequently shift points of view within a scene to show how two people are experiencing either side of a conversation — which is especially effective and engaging in Simon and Basilton (Baz)'s scenes, as their rivalry grows into a complicated romance.

But here's where the engagement with fan fiction makes this triply wonderful. Rowell has taken that most classic of fan fiction pairings, Harry/Draco and all they represent, and made them canon twice over: In the world of Fangirl, and in our world, where YA fantasy fiction centering gay romance is vanishingly rare. In Carry On, the relationship that is the cherished darling of fan writers the world over — that which is read between the lines, dreamed of, hoped for — is unapologetically, indeed generously, offered up as the main event.

While undoubtedly funny, charming and well-roundedly wonderful, Carry On's other adaptations of its source texts are a mixed bag. I loved that clever Penelope is brown-skinned and confronts Simon about assuming she should be named differently than she is; I loved that Agatha addresses Simon's assumptions about how relationships work, about thinking of a girlfriend as an end-game prize; I loved that Baz has Egyptian heritage.

Balancing Signal And Noise In 'Landline'

But the place where real-world and mage-world politics meet is a muddle of tone-deaf implications that I can't itemize without getting into spoilers. Suffice it to say that where Harry Potter's real-world analogies were transparently about fascism, racism and class, Carry On mashes a number of political concerns together without much of a care for how they fit or what they ultimately say. Partly this is understandable because the real work of the book is in the characters growing up and out of the world in which they spent their childhood (not unlike Cath in Fangirl) — but given how dextrous the rest of that source-commentary is, the politics stick out as a misstep.

In Fangirl, Rowell demonstrated a very kind, very thorough understanding of the impulse to read and write fan fiction: a desire to say "yes, and" or "yes, but" to a world, to engage with fantasy while commenting on reality, to create a space to see ourselves reflected in our favorite literature when we feel invisible in the real world. In Carry On, she has, well, carried on: Creating real, warm, complex characters doing the hard work of growing into themselves, with all the messy beauty that entails.