Accessibility links
In 'Love And Techno,' The World Is Cruel — But The People Aren't (Mostly) Anthony Marra's new short story collection is a hundred-year relay of Russian history, full of black, bone-dry humor and characters who are often (but not always) as awful as the worlds they live in.

In 'Love And Techno,' The World Is Cruel — But The People Aren't (Mostly)

In 'Love And Techno,' The World Is Cruel — But The People Aren't (Mostly) 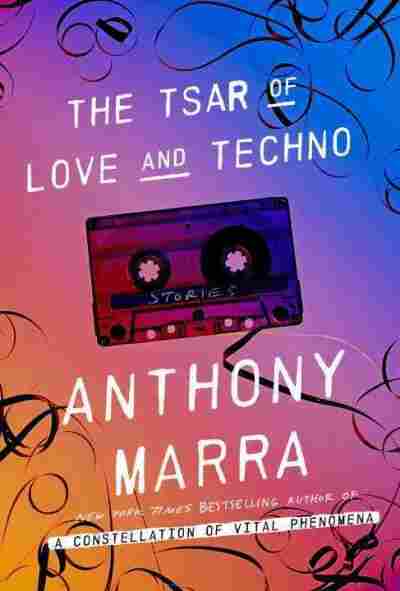 The Tsar of Love and Techno

It begins with a solitary Russian underground in Leningrad in 1937, in a train tunnel not yet completed — an artist censoring photographs for the state, removing the images of traitors from the official history of a place already expert at removing people.

It ends with a solitary Russian in a space capsule, year unknown, listening to an ancient cassette tape as he passes out beyond the orbit of Pluto.

And in between there is ... everything. The bizarre, heartbreaking, bitterly funny history of the Soviet Union, pre- and post-Glasnost, pre- and post-Communism, pre- and post-realism, told through a series of tightly interconnected short stories called The Tsar Of Love And Techno.

It's Anthony Marra's new book — new novel, really, because it is one story, told in the form of a dozen stories. From the artist-turned-censor who paints the face of his dead brother over the faces of a thousand disgraced bureaucrats, to the ballet dancer accused of conspiring with traitors, to that ballerina's granddaughter who, briefly, becomes the most famous person ever to come out of the nickel mining towns of the Siberian arctic, to one of her ex-boyfriends captured by Chechen rebels during the war, and on and on and on. It's a story passed like a baton from one teller to another; a hundred-year relay made up of dreams crushed and lives cut short, of self-destructiveness passed from one generation to the next to the next.

They run long, these short stories. And though they're often funny (ironically funny, painfully funny, funny in the cold observation, the well-timed remark or, at the very least, funny in parts), the laughs come hard and uncomfortably, always at the expense of the characters we're supposed to feel for.

A Mixtape Of Russian History In 'Love And Techno'

Did I love the extended run of "I slept with your mom" jokes in "A Prisoner Of The Caucasus"? I did. Even though they were bounced back and forth between two Russian soldiers being used as slave labor, just waiting for their opportunity to get themselves killed. And there's a certain raw humor (or at least a very Eastern European schadenfreude) in the swift falling-from-grace of Galina, the ballerina's granddaughter, because Marra uses her position as a failed actress, former beauty queen and trophy wife of the 14th richest oligarch in the land to deliver a double punchline.

The first is that the most important lesson passed from parents to their children in the years of Stalin and Brezhnev was one of ordinariness. "We've given them all we can," Marra writes, in the combined voices of a generation of Siberian parents speaking of (and to) their children. "But our greatest gift has been to imprint upon them our own ordinariness. They may begrudge us, may think us unambitious and narrow-minded, but someday they will realize that what makes them unremarkable is what keeps them alive."

And the second is that in this environment, it's better (or safer anyhow) to be the 14th richest oligarch than the first or the second.

'The Tsar Of Love And Techno' should be a sad book, but I walked away from it remembering it as funny.

"The Grozny Tourist Bureau" has the best set-up: A former deputy museum director ordered by his superiors to become the head of the titular Bureau and to turn a city shattered by war into "the Dubai of Chechnya." Here's a taste of Marra's perfectly black and bone-dry humor, in this exchange between the not-at-all crazy protagonist (who has already insisted that a mass grave full of executed bodies will become "a major tourist attraction for archaeology enthusiasts") showing off Grozny's sights to a group of Chinese businessmen looking to do oil business in Chechnya:

"The translator nods to a small mountain range of rubble bulldozed just over the city limits. 'What's that?'

The Tsar Of Love And Techno should be a sad book, but I walked away from it remembering it as funny. Marra's gimmick here is that the world is cruel, is capricious, is murderous absolutely, and his characters are, too — just not all the time. Where the world is consistently terrible, the people Marra fills it with are occasionally kind, occasionally joyous, occasionally funny.

And the oddest, most affecting thing about the book is that it reads almost like science fiction in its alienness and sharply observed weirdness. It is a book that seems designed to hammer home the wisdom that all love ends in betrayal, that all success is born of lies, that sometimes we laugh to keep from screaming, and that all of our modern dystopias come with precedents — that since the human race is so perfectly capable of creating real, banal and beautiful horrors all its own, it's a wonder that we ever need to invent nightmares to keep us up at night.