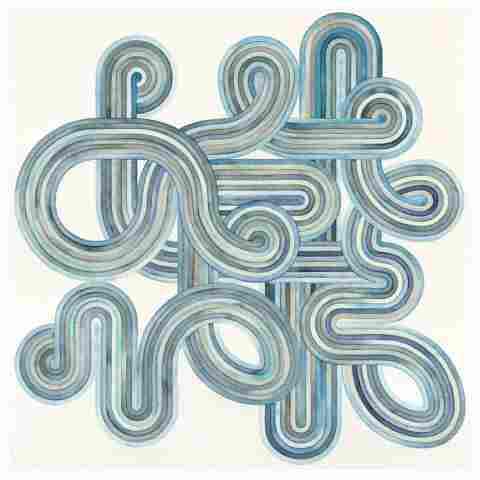 Chris Walla spent 17 years as a songwriter, guitarist and producer for Death Cab For Cutie, and Tape Loops is his first solo album since leaving the band in 2014. But if you're inclined to resist a solo record by "the other guy" from Death Cab, know that Tape Loops couldn't be farther from the sound of his old band. His intentions for this project were sketched out in a post he'd written for Seattle's The Stranger last fall: "I long for the unknown. It might be that simple."

Rather than create a variation on Death Cab's sound, Walla crafts an ambient record that sonically approximates the cover of Death Cab's 2008 album Narrow Stairs: It takes familiar things, cuts them up and gently rearranges them to form an abstract expression. True to his statement, there's something unknown and simple about Walla's Tape Loops. With five pieces spanning just shy of 40 minutes, Tape Loops lives up to its title, as Walla creates the album using piano and electric keyboard that have been recorded to reels of magnetic tape, as well as cutting block and razor blades. It's a practice common to previous generations of producers, in recordings by everyone from The Beatles to Fripp and Eno to Can.

But there's something decidedly reactive about Walla's methods in 2015, when one can simply sample and loop with a touch of a button rather than sweat for minutes or hours to make sure the slice is just right, and where "measure twice, cut once" becomes vitally important. "Kanta's Theme" is six-plus minutes of bass tones that pull like an undercurrent and a plangent piano that sounds like the melodic line from Feist's "I Feel It All" slowed to a spa soundtrack. "I Believe In The Night" is the album's most subtle and lyrical piece, but also its most concise, with a warm, luminous drone that follows a winding organ line.

Naturally, the notion of linear time becomes suspended on Tape Loops. "Introductions," contrary to its title, is the album's second entry, while "Goodbye" is its penultimate track. In the former, a slowly descending piano line moves with almost imperceptible buzzes and oscillations that arise as the notes decay. Just when it seems to fall into silence, the looped piano line resurrects the contemplative piece. "Goodbye," at more than 11 minutes, moves with the slow elegance of Brian Eno's Music For Airports. Motifs enter and depart, only to return again, seemingly unnoticeable. But let Tape Loops play a few times and it shifts subtly from wallpaper music to something that sounds like every note is nonchalantly placed with great care and purpose.