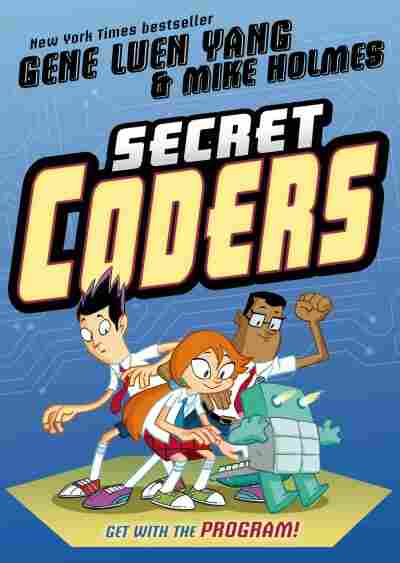 Four-eyed robot birds really shouldn't be necessary to get kids excited about computers. For that matter, Gene Luen Yang and Mike Holmes' whole book (in which four-eyed robot birds are prominently featured) ought to be laughably superfluous to the education of today's youth. With computers mediating everything we do, exchanging information in the very air around us, you'd think kids would be learning binary code with their ABCs.

And yet, as we're reminded quite frequently nowadays, that's far from the case. Even as the chorus of voices calling for better computer education swells, only 27 states allow students to count computer science courses toward high-school graduation. (That's according to the nonprofit Code.org, which helped President Obama write his first line of code last year). Girls' computer education is particularly lacking. Just 0.4 percent of girls entering college plan to major in computer science, according to a report by the American Association of University Women.

Yang and Holmes are fighting back. Veteran comic artists, they clearly know all about the medium's power to snare kids' attention. They've created a setting, characters and puzzles — plus the aforementioned four-eyed robot birds — to keep young readers interested long enough for them to absorb a few fundamentals.

The characters are the most important part of that equation, and in this area Yang and Holmes largely succeed. Hopper, the heroine, is both spunky and awkward — a highly relatable mix for the tween set. (Yang and Holmes doubtless chose Hopper's gender with an eye toward those hard-to-reach girl readers.) With a wild ponytail and a huge mouth and eyes, Hopper lets all her feelings fly. She's a new student at the Hogwarts-ian Stately Academy, but she can't seem to find her tribe. "Someone's got to invite ... me to their table, right?" she says, sitting alone at lunch. "Hopefully someone from my Mandarin class. They'll get a kick out of my robot voice."

That changes when Eni, who looks like a jock but turns out to be no meathead, calls Hopper's attention to the birds. Looking at the way they wink their eyes, he realizes they're communicating in binary. That's the spur for an elementary lesson in the fundamental computer language. From there it's a short step to programming a cute little maintenance 'bot. The kids also learn there may be dark things going on at their school — but by then the book is winding up. To find out all the secrets, the final page says, stay tuned for the next installment.

If only it didn't all seem so, well, programmatic. Of course Hopper feels alienated at her new school; that prepares the ground for her unlikely friendship with Eni. Of course the creepy school janitor is more than he seems. Even the characters' names serve the book's mission: Hopper is named after pioneering computer scientist Grace Hopper and Eni after ENIAC, the first computer. The hammy, exaggerated art — a fine choice for a kids' book — somehow feels a bit too slick. It's as if each character was drafted with an eye toward an animated spinoff. (And what's with the choice of that pukey acid green as the only fill color?)

The average kid reader isn't likely to notice these problems, and the book's puzzles are well-designed. It's just unfortunate that this celebration of machines doesn't breathe a bit more.