Accessibility links
Scientists Try Radical Move To Save Bull Trout From A Warming Climate Bull trout are dwindling in Montana as their home waters warm and invasive fish devour them. Scooping up threatened fish and moving them higher up the mountain could backfire. Is the risk worth it? 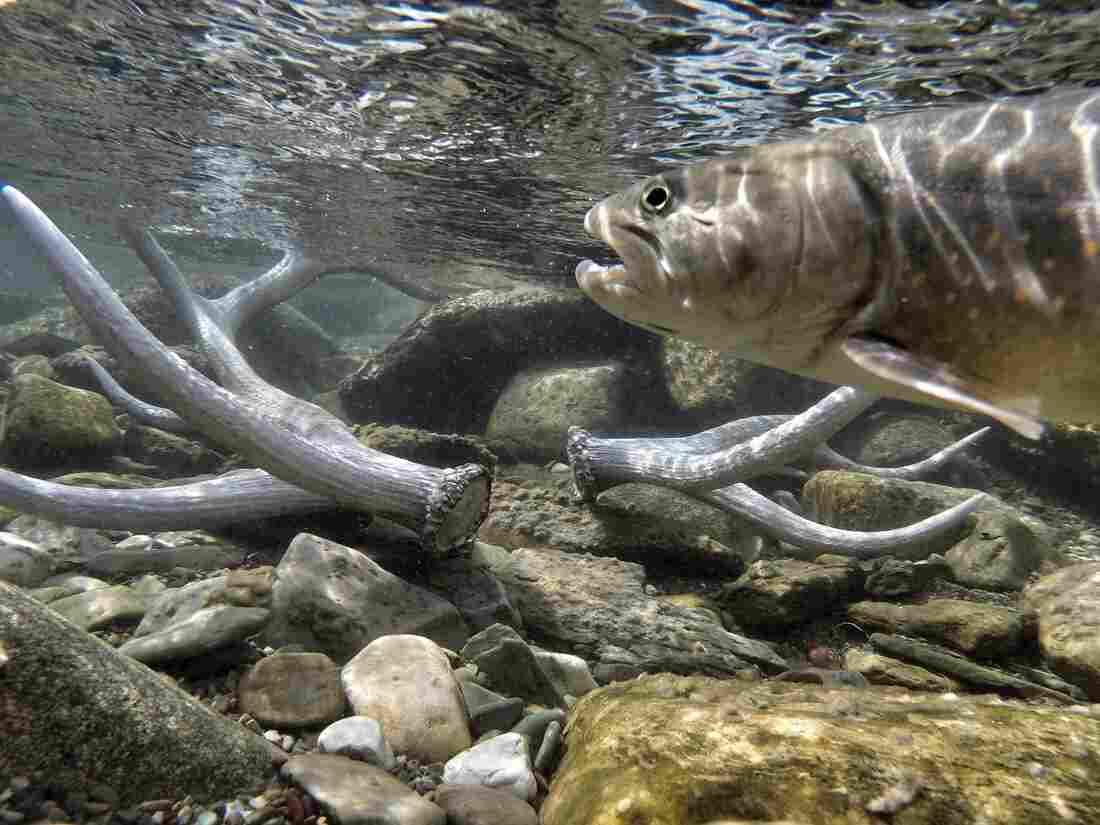 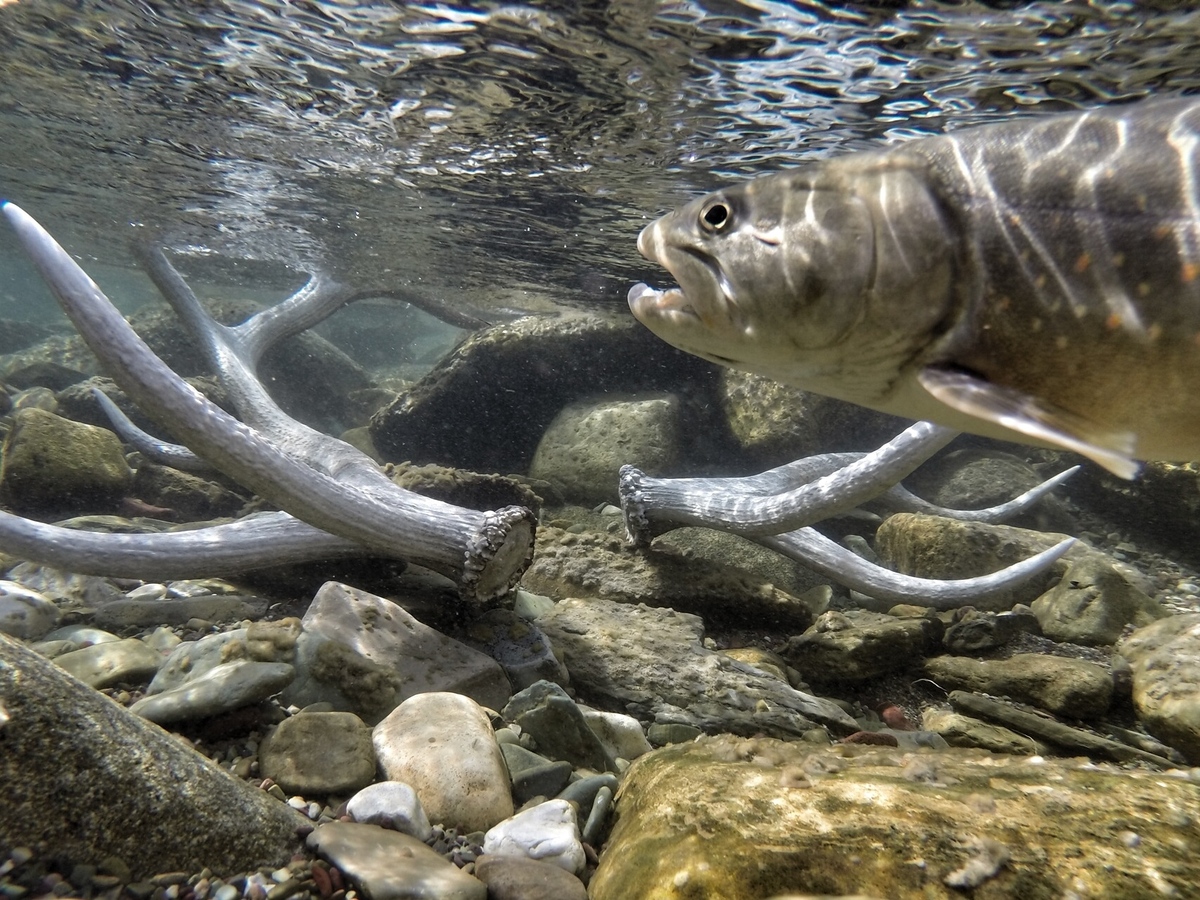 Bull trout are running out of time in Montana as their traditional waters heat up, biologists say. By moving more than 100 fish to higher elevations, fisheries scientists hope to save the species by seeding a new population in waters that will stay cooler longer.

Something unusual is happening in America's wilderness — some animals and plants are moving away from their native habitats. The reason is a warming climate. It's getting too hot where they live.

Species that can't migrate may perish, so some biologists say we need to move them. But they admit that's a roll of the dice that violates a basic rule of conservation: If you want to keep the natural world "natural," you don't want to move plants and animals around willy-nilly.

Why not? Well, Europeans introduced rabbits to Australia for food and hunting in the 18th and 19th centuries and the rabbits overran the place. Residents of the Great Lakes are up to their eyeballs in invasive zebra mussels. People brought wild pigs to Hawaii, and the animals have destroyed much of the rain forest there.

But a few years ago, some biologists argued that the planet is warming faster than many plants and animals can handle. Maybe, they wondered, we should take a risk and move some of them.

"My read on it then was that it bordered on the heretical," says Ben Minteer, an environmental ethicist at Arizona State University. He agreed with most conservationists: Such climate translocations were essentially introducing invasive species. They could upset nature's ecological balance.

But Minteer has changed his mind. "The moral position, instead of hands-off, it might be hands-on," he says now. "Our responsibility is actually to go in, pre-emptively relocate these species to give them a chance to survive."

Some biologists still say that's too risky. But others have already replanted trees and moved butterflies to cooler regions in anticipation of climate change. And now a team in Montana has undertaken one of the boldest translocations yet — moving an iconic Western fish, the bull trout, to protect it from climate change. 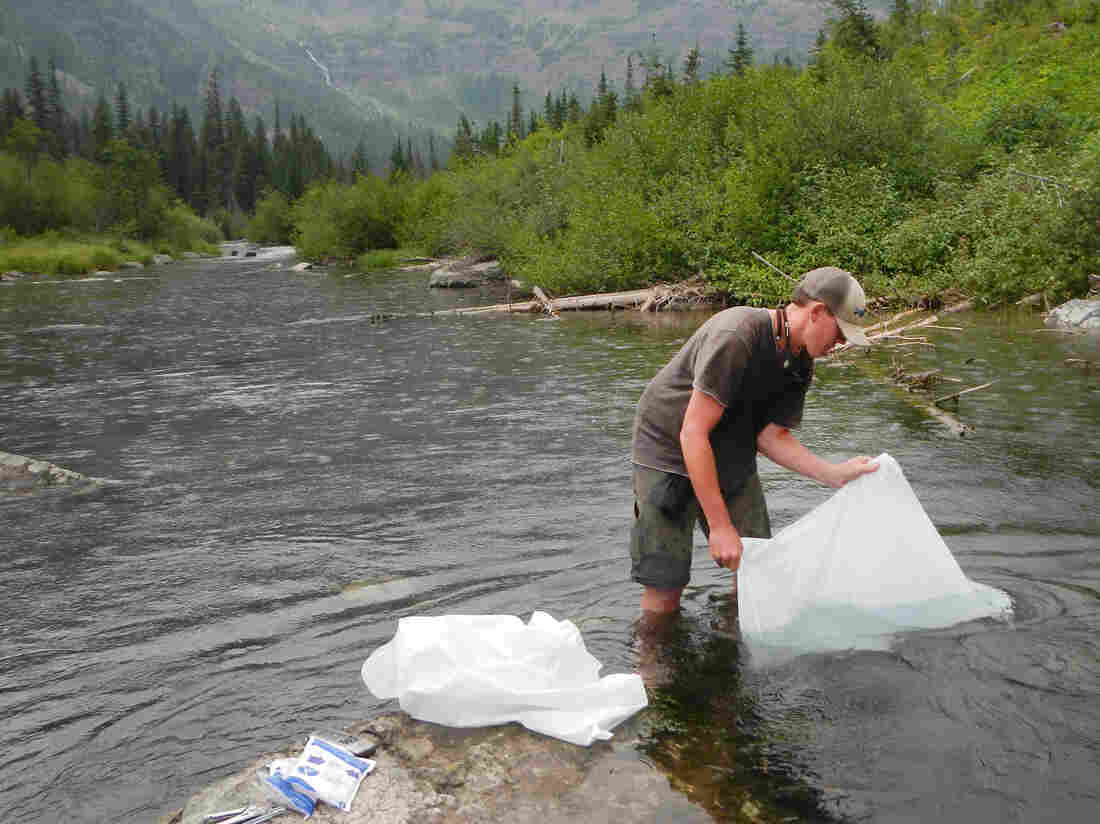 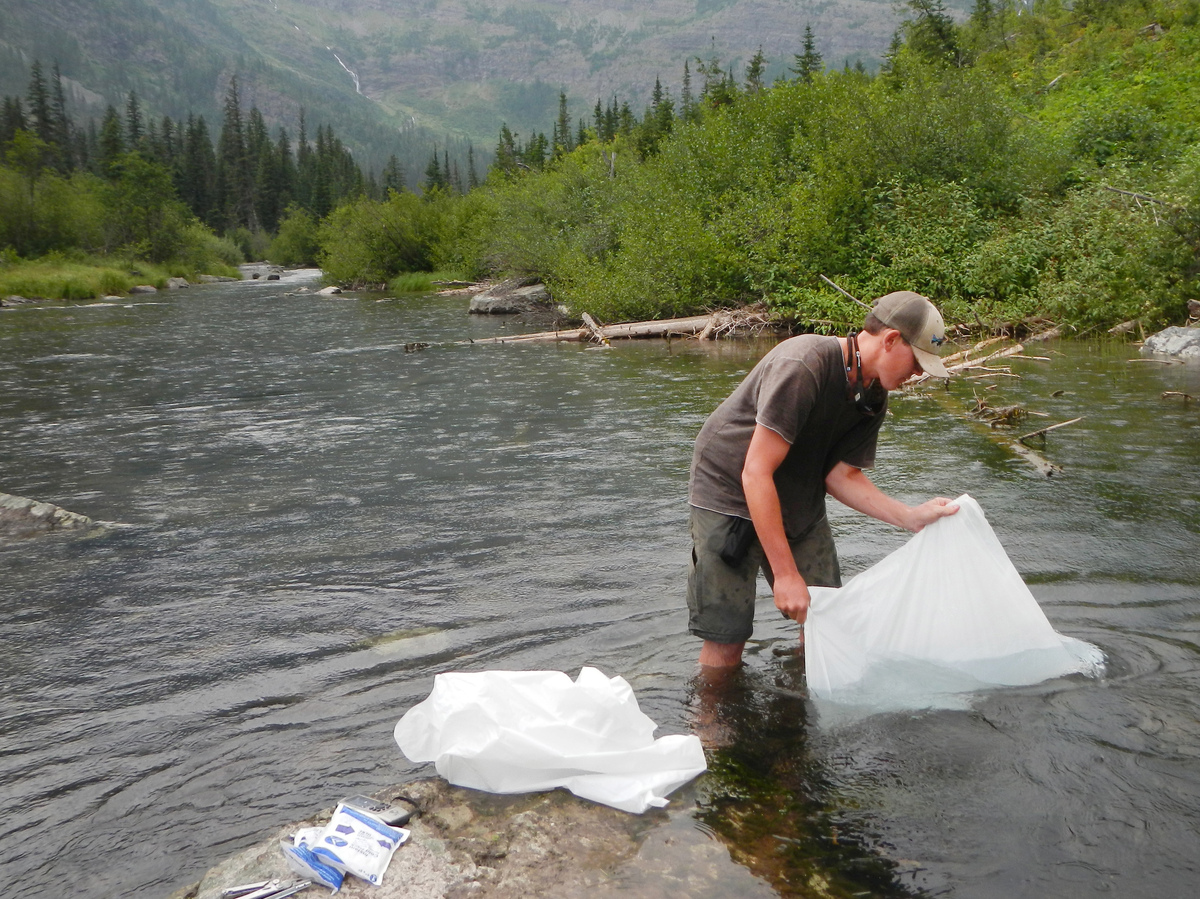 I find the team leaders knee-deep in Logging Creek, which runs clear and fast through tall forest in Glacier National Park. I struggle to keep up with Clint Muhlfeld, a research ecologist with the U.S. Geological Survey. His life revolves around fish — and, in particular, trout — and he's in a hurry.

"The intention here is to save some of the last remaining bull trout populations and create new ones that will survive under a warming climate," he says as we ford the creek. That's the mission at hand — find bull trout and move them to safety.

Bull trout are a threatened species, he explains. They're finicky. They need very cold water. Already, another kind of trout that's not native here is eating them. And now lakes and streams in the mountainous West are getting warmer. Too much warming could finish off this trout population.

Once we reach the shore, Muhlfeld points to a spot on a map — a red circle marks bull trout territory.

"We're hiking up the 6-mile trail to the foot of Logging Lake," he says. There, the team has stashed a 20-foot aluminum boat — they had to hoist it there by helicopter. We'll motor to the head of the lake and spend the night. Tomorrow, we'll capture juvenile fish, put them in special, oxygenated backpacks, and haul them up a mountain trail to a lake that sits at a higher elevation — which means it's likely to stay cold longer.

"[It's] about 2 1/2 miles to Grace Lake, which is above a waterfall," Muhlfeld says, "where we think they're going to do really well under future climate change." 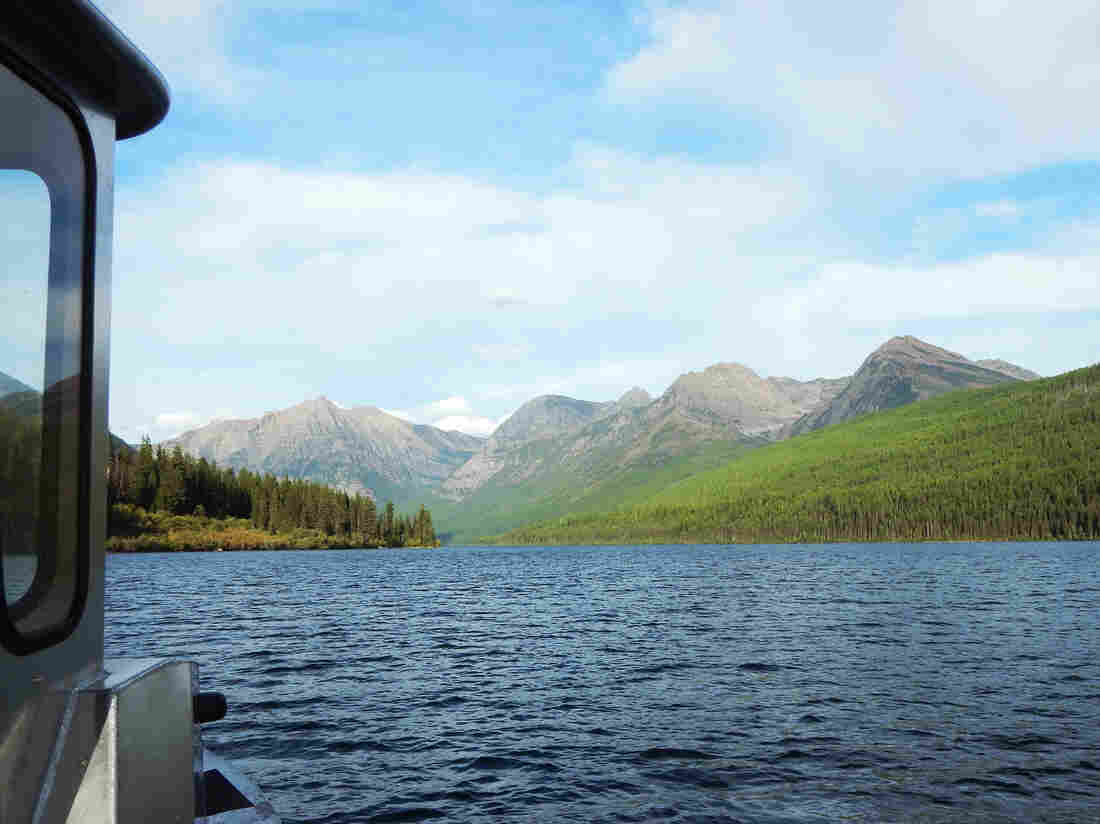 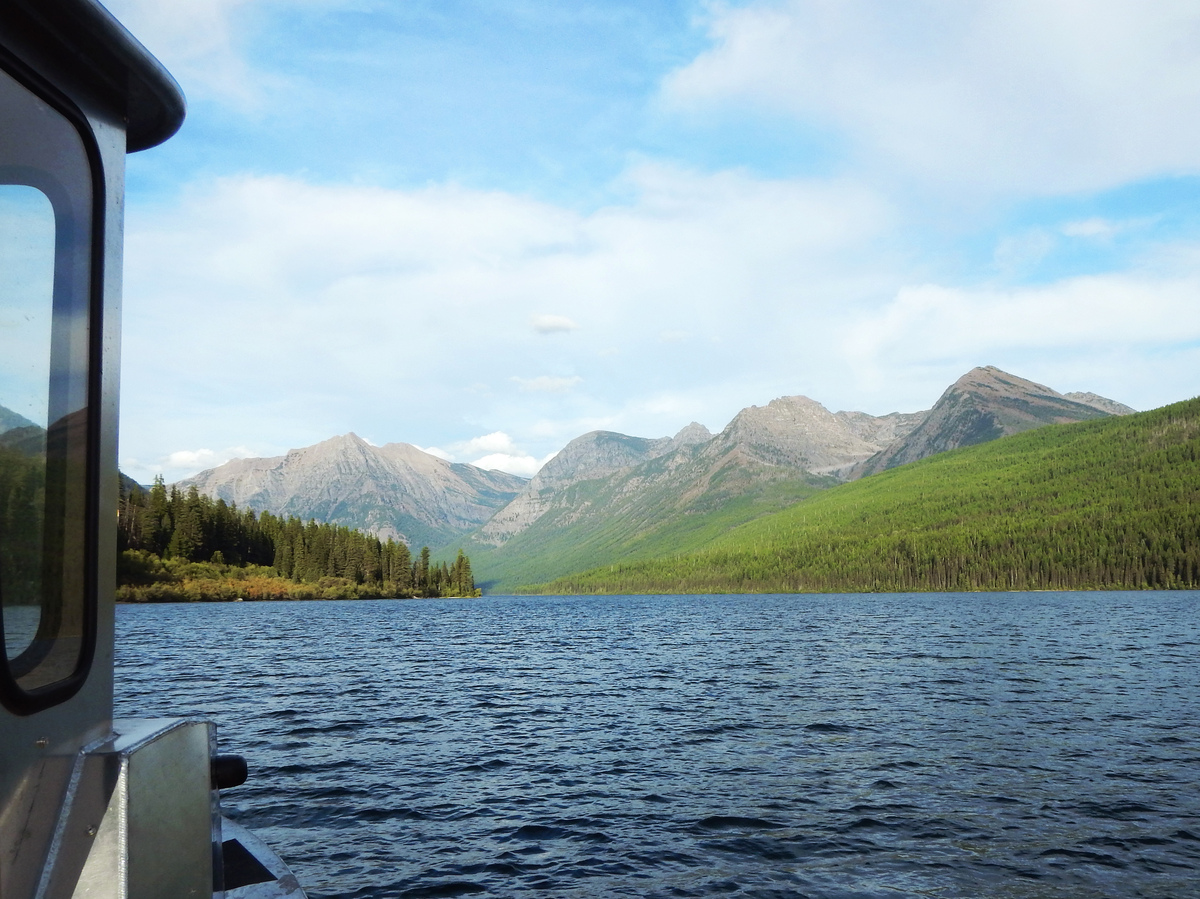 Logging Lake, inside Montana's Glacier National Park, is lovely, but bull trout there are fast dwindling.

Muhlfeld's collaborator is fisheries biologist Chris Downs from the National Park Service. He hands me a sidearm — a can of bear spray. "You want to carry it in front of you," he advises. "Be familiar with how to use it, when the bear is approaching. This one just sits loosely in its container." I notice he says "when" the bear is approaching, not "if."

We hike for four hours up a meandering trail through lodgepole pines, tall grass and late summer wildflowers. No bears, just bear scat and enormous paw prints. It's mostly uphill. We're carrying gear for three days. (A mule train went up the day before with food and more gear.) There's no sign of people anywhere.

We reach the boat where team members Jon McCubbins and Andrew Lamont meet us. As we motor toward the top of the lake, I ask Downs if people think he's crazy to literally carry fish up a mountain to what they think will be a climate refuge.

"You know, it's raised some eyebrows," he acknowledges, "for meddling in nature in a wilderness perspective. But it wasn't like it was something other folks thought was completely outrageous."

He notes that the Park Service did extensive environmental research to be sure the upper lake could support a new species of fish that had never lived there before, and to make certain that it wouldn't threaten other animals and plants that live there.

The team's first translocation of bull trout was last year. They captured 125 fish and moved them to the upper lake. They know some survived — the fish were electronically tagged — but overall, it's still an experiment. This year, they don't know how many they'll catch. Already, these lakes and streams are getting warmer.

"I mean the time to act is now," Downs says, noting that it's the Park Service's mission to protect life in the nation's parks.

"We don't want to be looking back on this in 25 or 50 years and saying once again, we wished we'd done something when we had a chance."

At dusk, we reach a cabin built in the 1930s. Grizzlies have scraped hunks out of the cabin logs with their claws. We eat dinner al fresco and then collapse for the night. At 2 a.m., a pack of wolves surrounds the cabin and tents the team has set up, and sets to howling for a couple of minutes. The wolves leave as suddenly as they arrived.

Next morning we assemble our gear. We're going electrofishing in nearby streams. One person wears a backpack that generates electricity through a 6-foot metal pole. When he pokes the pole in the water, it briefly paralyzes juvenile trout, so the team can scoop them up with nets.

But it works. Fish wriggle out from under rocks and tree roots. "Oh yeah, what is that?" Muhlfeld shouts. "Aaaaah, no," he says. "That looked like a bully." Instead it's a sculpin, a local fish of little interest. 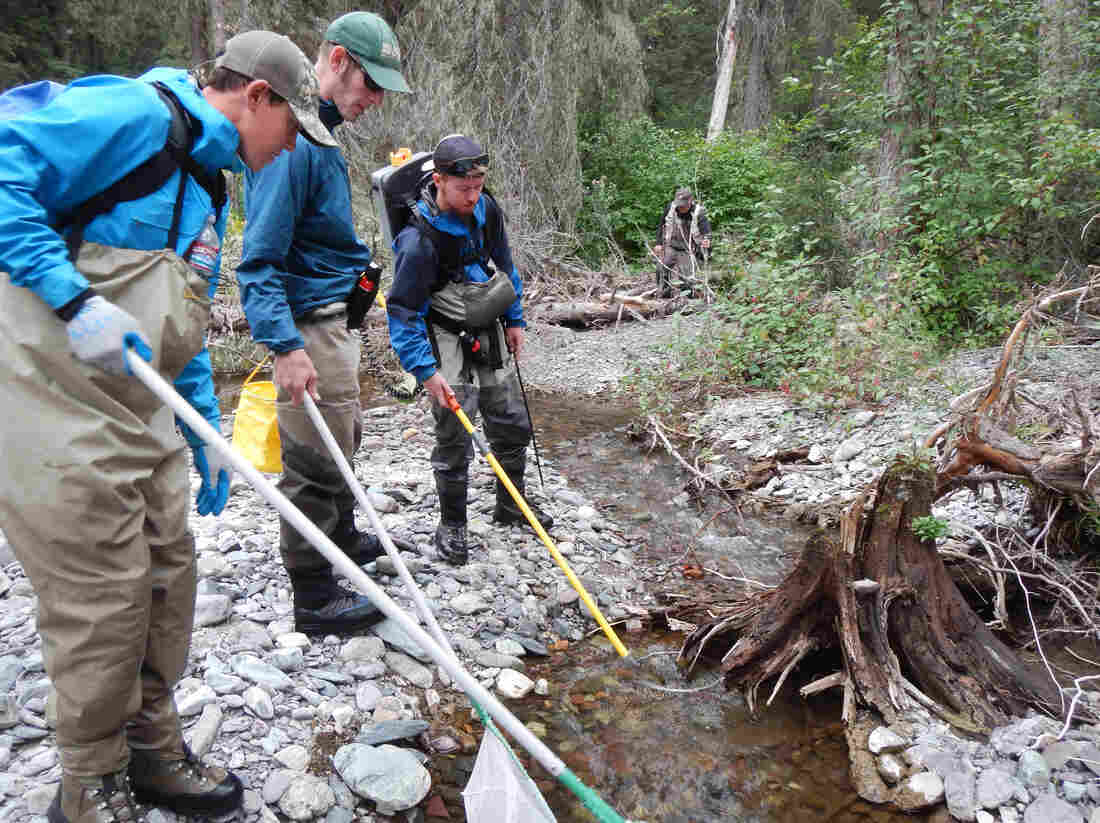 Biologists run a light current through a stream to temporarily stun juvenile trout they want to catch, and gently scoop them up with nets for the big move. Courtesy of Chris Downs/National Park Service hide caption 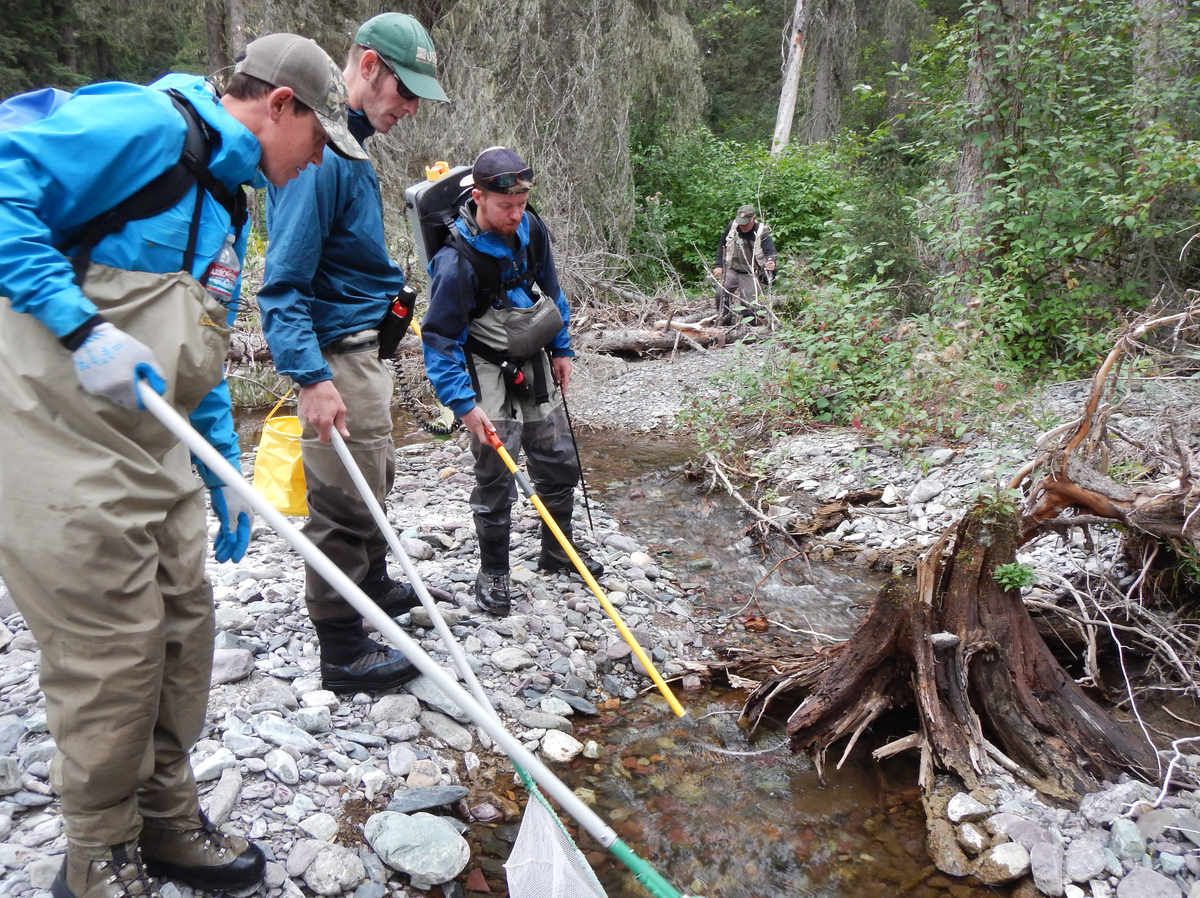 Biologists run a light current through a stream to temporarily stun juvenile trout they want to catch, and gently scoop them up with nets for the big move.

We splash around for hours, climbing under and over fallen trees and fighting through undergrowth. We catch lots of fish, but they're the wrong kind — cutthroats and sculpins, not the rare bull trout. Muhlfeld tries to be positive.

"This is a grand experiment, you know," he says. "We're hoping it works. We think it will." He eggs on the crew: "Over here," he says hopefully. "This is a good spot from last year."

But it looks like the bull trout are just gone. We reach the source of the streams, a magnificent 40-foot-high waterfall. Still no bull trout. Muhlfeld wonders if they're too late.

"It just goes to show you how quickly things can change," he says.

Then comes a shout. "Yeah! All right," Downs yells, holding his net aloft. "We got a bull trout."

"Look at that beauty," Muhlfeld crows. "We got a survivor. Gorgeous." Andrew gets credit for herding the fish into Downs' net.

McCubbins holds it up in a plastic bag of water. The fish is 5 inches long, blunt-headed and olive green. It peers out at me with a perplexed look. 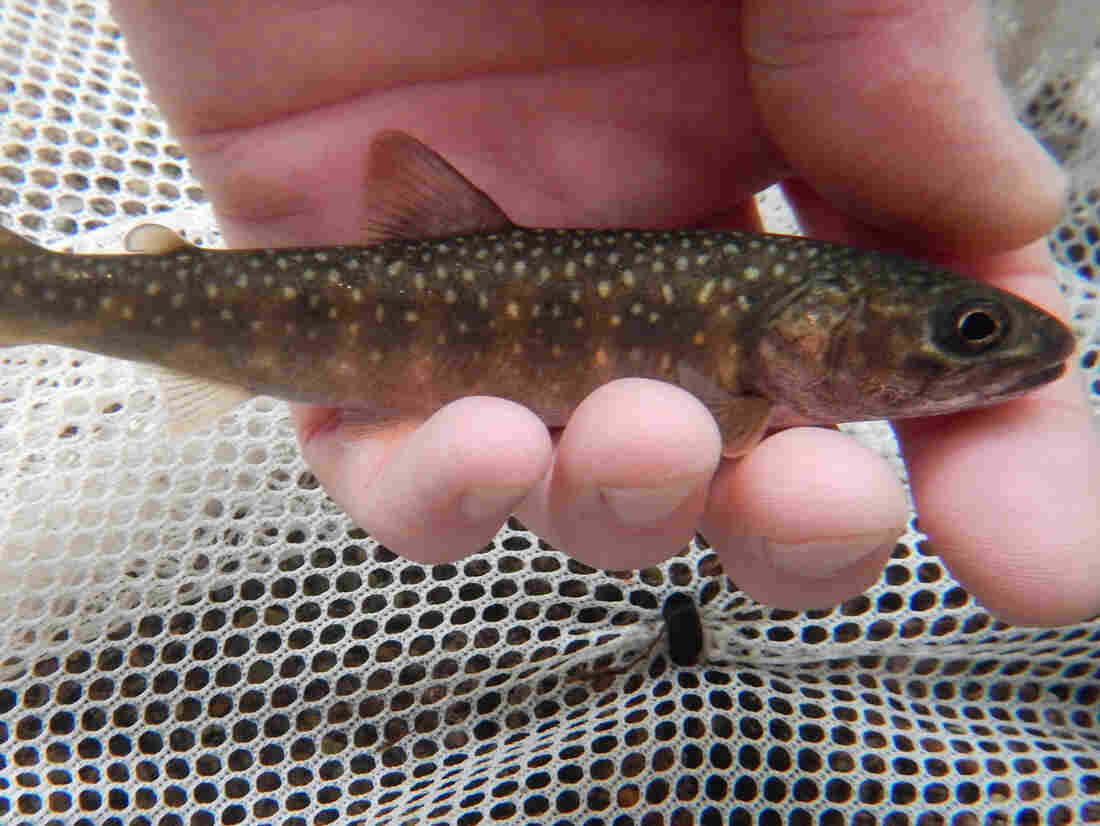 Scientists have to work fast to get this young bull trout to the upper lake. They'll tag it before release, to track its further adventures. Courtesy of Chris Downs/National Park Service hide caption 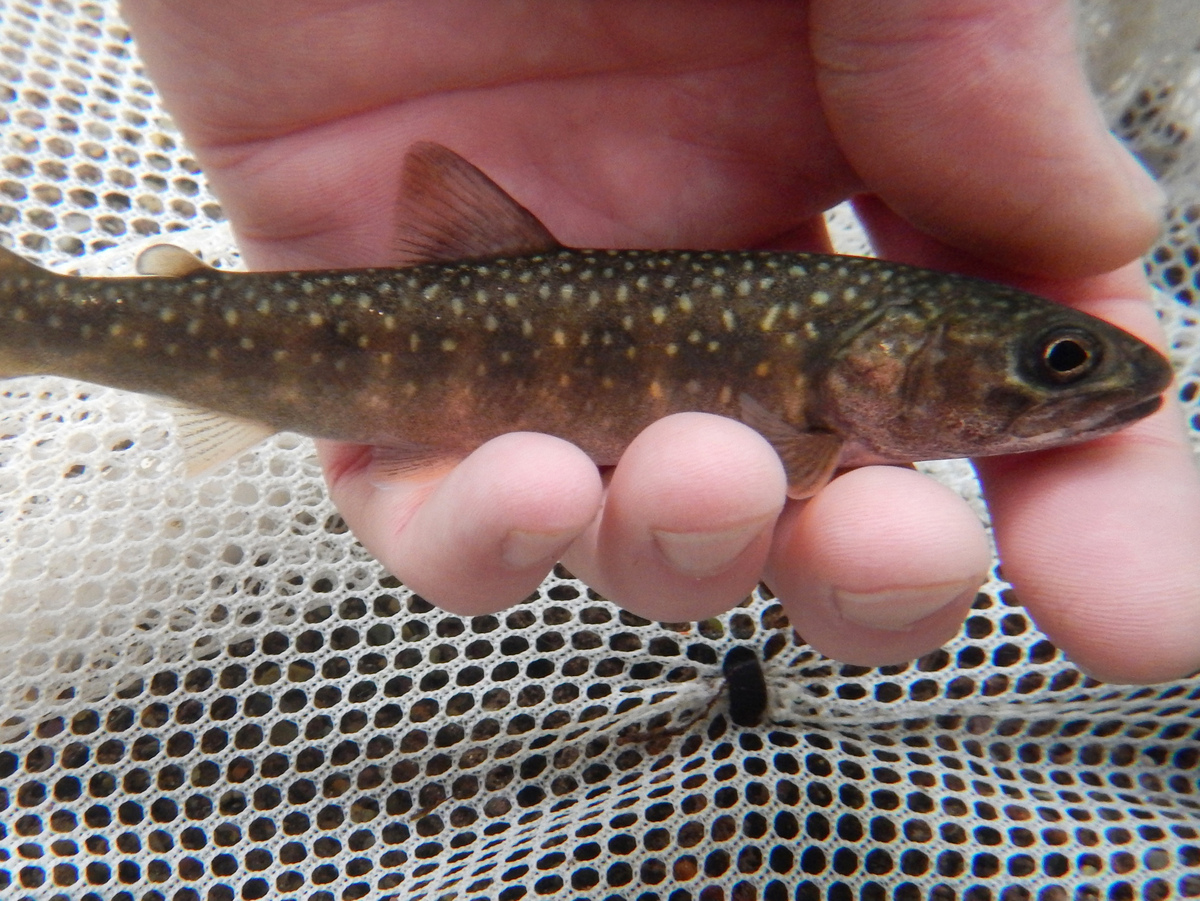 Scientists have to work fast to get this young bull trout to the upper lake. They'll tag it before release, to track its further adventures.

"Now we've got to move fast," says McCubbins. "Got to get it to the upper lake." If left too long in the bag, the fish will asphyxiate.

The scientists find a flat section of gravel bed and set up equipment. Muhlfeld inserts a tiny electronic tag in the fish so his team can follow it once it's released. He also slices off a tiny piece of fin to get a DNA profile. The fish goes into a plastic bag of water into which Downs pumps oxygen from a small cylinder. The bag then goes into Muhlfeld's backpack, and we're off, up the trail to Grace Lake — bull trout Shangri-La.

Muhlfeld vaults ahead — when he's not biologizing, he's a professional mountain biker whose nickname is "The Lung." The fish weighs next to nothing, but there's 35 pounds of water in the bag, too. An hour later, we reach the lake. Clear water, no people, and isolated from everything downstream by a 40-foot waterfall.

Muhlfeld eases the plastic bag from the backpack and opens it. "All this for one fish," he says, acknowledging what I'd been thinking for two days.

"But we're saving a species one fish at a time," he says. The fish slides out of the bag into the lake, hangs for a moment, then slowly swims off.

"Well, live long and prosper, young bully," Muhlfeld calls after it. "Make lots of babies for us."

Success. But I have to wonder. What's the big deal about bull trout? Why this Herculean effort?

For one thing, the scientists explain, it's the most threatened native trout in these waters. And Downs says every species you lose makes the whole trout family more vulnerable to everything from disease to temperature change. It's a biological axiom; the more genetic diversity in an ecosystem, the more resilient it is.

But the herculean effort isn't from the fish; it's from the team. They hauled hundreds of pounds of gear for miles uphill, got soaked for two days, and risked bear attacks to do this. The easy answer to why they do it is that they love the land. They hunt game here, camp, fish, ride mountain bikes.

They have a compelling relationship with wildlife that is a constant source of awe. Muhlfeld puts it this way: "The bull trout represents thousands of years of adapting to a changing climate — droughts, floods, wildfire, glaciation — a native fish that has survived those kind of cataclysmic occurrences."

Helping this ancient fish survive a man-made threat is worth all this effort, he says, even if it's just a roll of the ecological dice.