Accessibility links
To Flood-Proof Subways, N.Y. Looks At Everything From Plugs To Sheets New York City's transit authority wants to protect Lower Manhattan subway stations from storm flooding. It's racing to get technology tested and in place in time for the next big one. 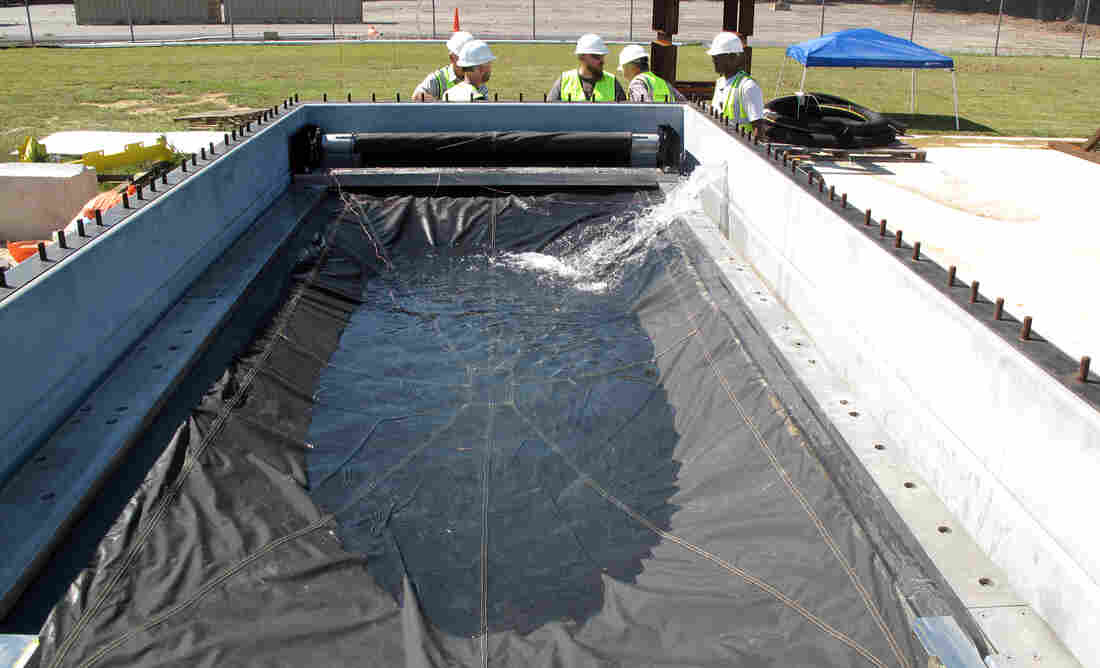 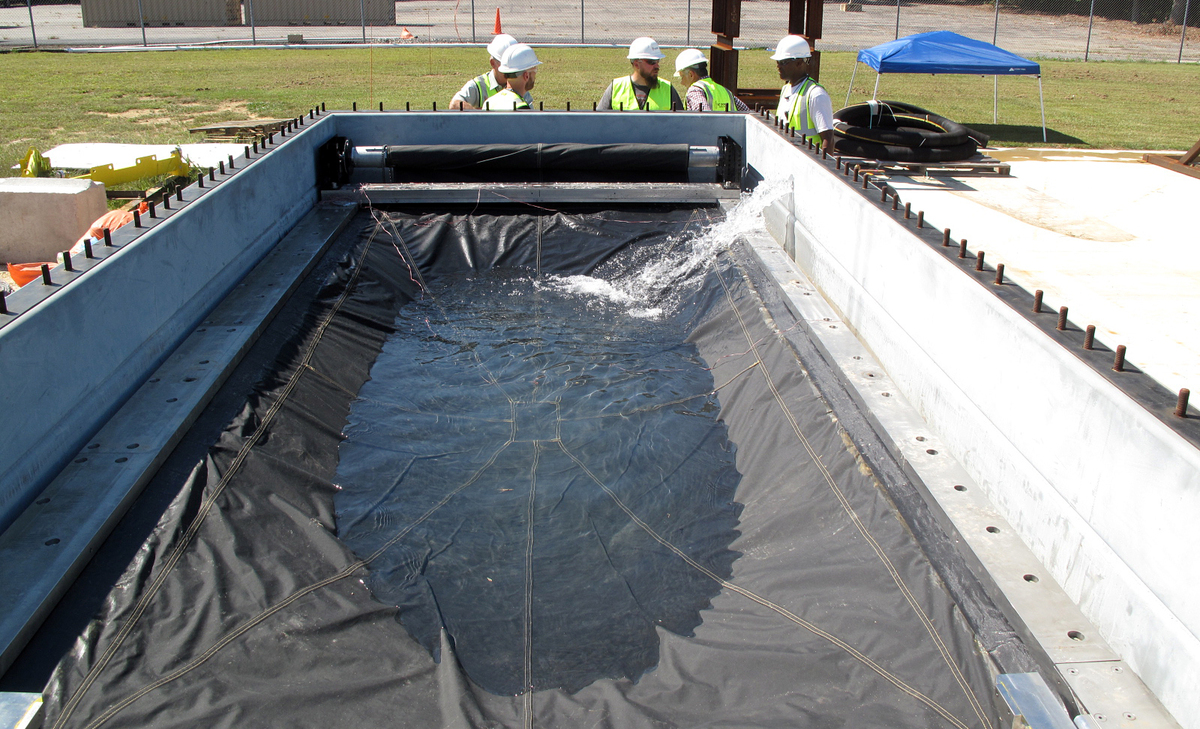 Engineers test the Flex-Gate, a big sheet of waterproof fabric designed to cover subway entrances and keep water out. Its creation was inspired in part by roll-up metal doors used to cover store entrances.

New York City may have dodged a major storm recently when Hurricane Joaquin headed out to sea, but it was an unwelcome reminder of what happened three years ago when the city suffered catastrophic flooding during Superstorm Sandy. Now, the New York subway system is racing to get new flood-proofing technologies ready in time for the next big storm.

One of those methods is called the Flex-Gate, a big sheet of waterproof fabric designed to cover subway entrances and keep the water out.

Engineers at the firm ILC Dover recently tested the Flex-Gate by hoisting it into a big custom-made box a few feet off the ground. They covered it with several feet of water and then measured how much is leaks. As the box filled up, some water started trickling.

But David Cadogan, the firm's director of engineering, isn't worried about a trickle. It's fine if a little water gets through, Cadogan says, as long as it's less than the subway's pumps can handle — and they can handle a lot: 13 million gallons on a typical day, even if it's not raining.

"You look at something like that and that looks like a bit of a leak, and it's not that much when you're talking gallons per minute," Cadogan says.

Cadogan drew the first sketch for the Flex-Gate in 2013, during a meeting with the Metropolitan Transportation Authority (MTA), which operates the New York subway. It was partly inspired by the roll-up metal doors you see over shop windows in New York City at night.

"We just quickly started thinking, well, we need to put fabric over the top, how would we seal the outside?" Cadogan says. "And very quickly we came to a just very simple drawing saying, this is what we think we could do."

"This is a solution we designed in-house," he says. "There is nothing like this that exists."

That's not the only new technology the MTA is exploring, says John O'Grady, program officer for infrastructure and facilities. It's his job to make sure the subway is ready for the next big storm. After Sandy, O'Grady says the MTA looked at other subway systems all over the world to see what worked, and what didn't.

"We didn't find any unique technology that we could say, someone had solved the problem," O'Grady says, "so we set about trying to see if we could research and develop technology."

If you want to know why this problem is so hard, just look at a map of lower Manhattan. It's surrounded by water on three sides. Most of the subway lines converge here. There are six stations within blocks of each other, with entrances just a few feet above sea level. And O'Grady says there are lots of different ways for floodwater to get in. 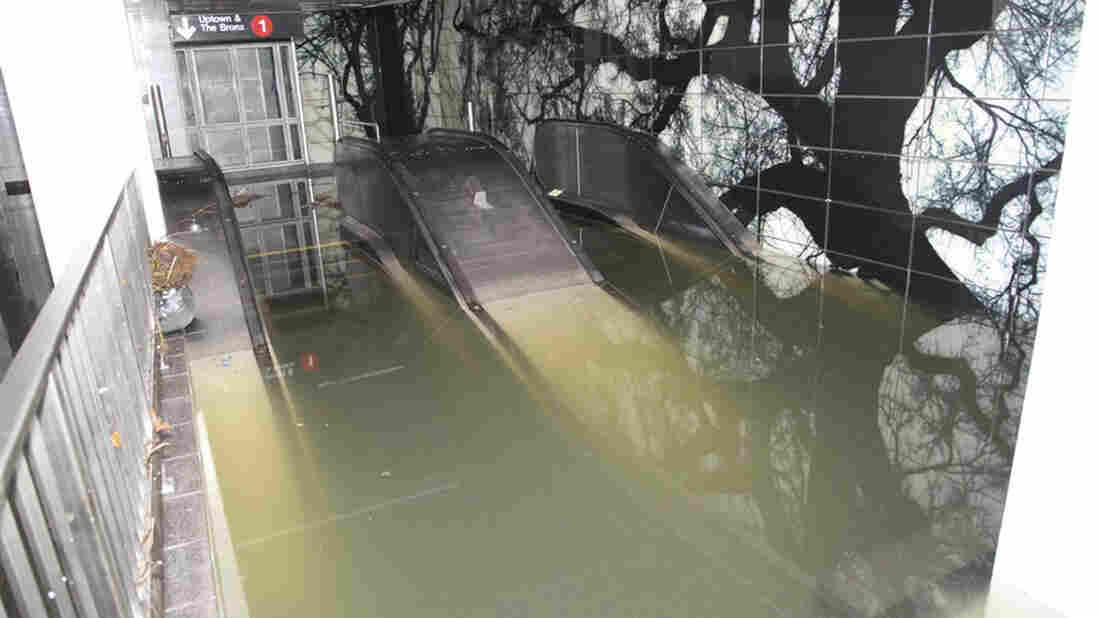 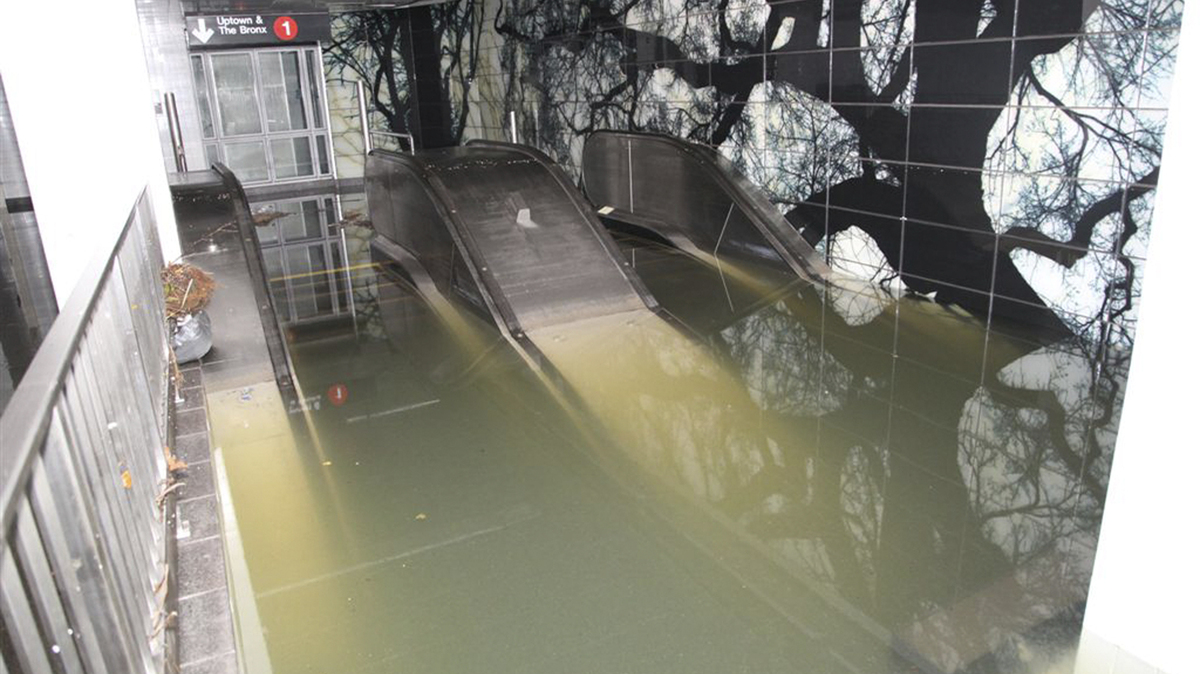 "In Lower Manhattan here, it's actually making sure every possible entry point is closed off," O'Grady says. "Just making sure we get every vent bay, every manhole, every emergency exit and every staircase all closed off. There's numerous different ways for flooding to occur. And the challenge that we've embraced is the fact that we will close off all of those flooding vulnerabilities."

To make things even more complicated, the subway entrances themselves are all slightly different sizes. So O'Grady is looking for solutions that are easy to deploy. That's one reason he likes the Flex-Gate: it's built right into the subway entrance itself.

"There's an enormous effort to keep the transit system running as long as is possible, up to the decision to close the system," O'Grady says. "So this is a technology that's stored in place, and it requires a small crew to just go in there and set it up."

No subway station suffered more damage during Sandy than South Ferry. The new station, which cost more than $500 million to build, was destroyed by flooding. So the MTA was forced to put an older station back into service. And with rising sea levels, the risk of severe flooding is getting worse.

"We're going to see that level of flooding that in the past might have been a once-in-100-year event happening every generation," says Radley Horton, a climate scientist at Columbia University. Horton says it's commendable that the MTA is taking this threat seriously.

The agency has about $4 billion — mostly in federal money — to spend on recovery and resilience. And Horton says it's important to keep track of it. "We're conducting a grand experiment," Horton says. "We're now seeing real money being spent to try to prepare for some of these hazards like coastal flooding. We're less far along in evaluating how these measures may work or not work. So we really need I think a whole science to hold these projects accountable and identify which ones are the winners."

One of the challenges, Horton acknowledges, is that it's hard to know exactly how a new technology will perform until it's tested in a real-world storm. "That's a huge issue," Horton says. "How can we even begin to assess whether a flood gate is working without having that big storm?" 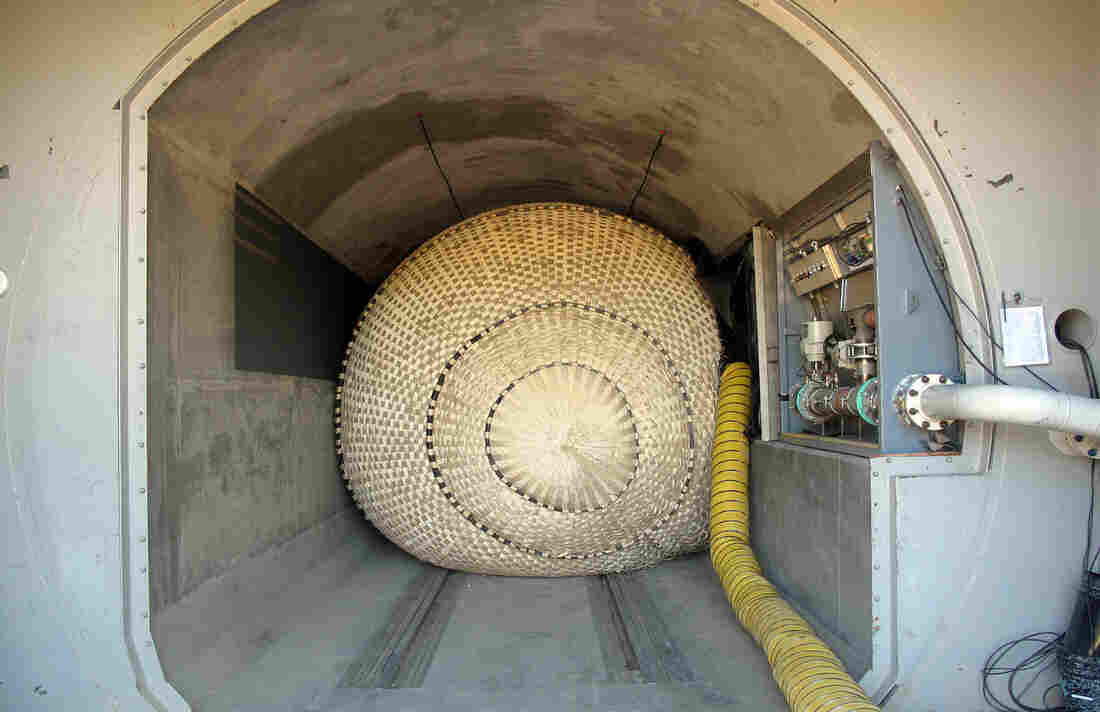 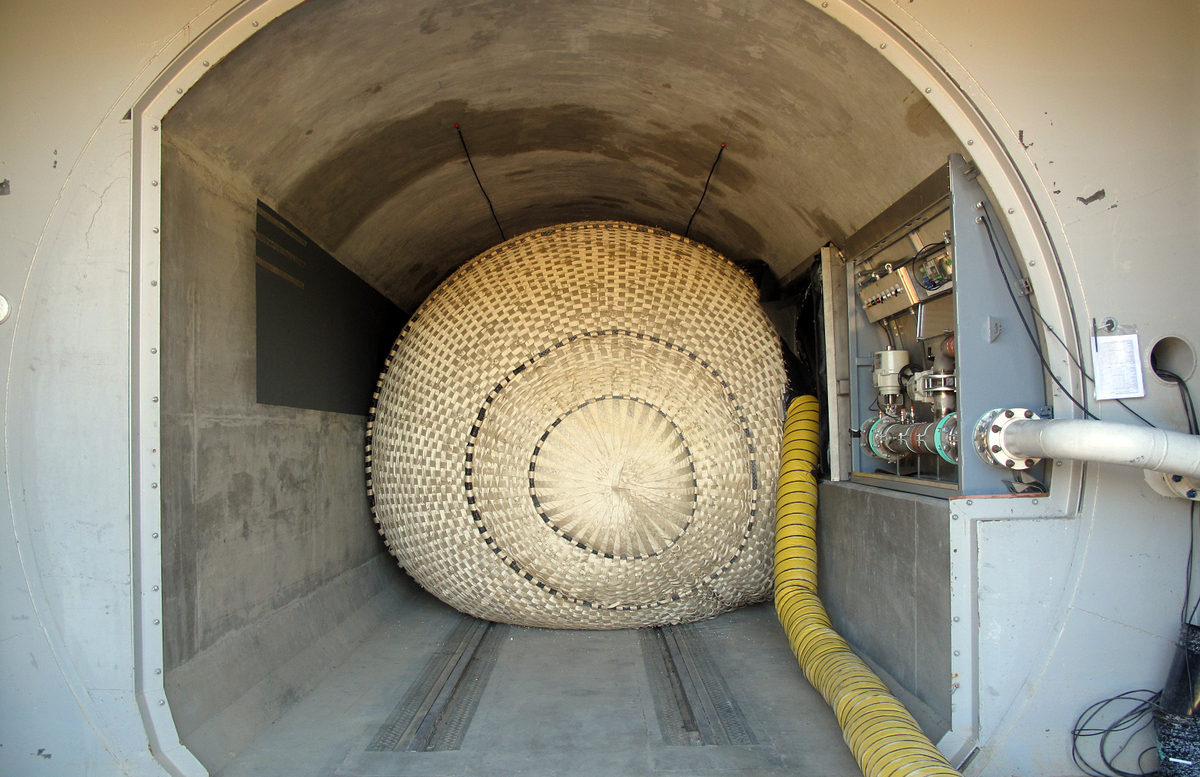 A resilient tunnel plug inflates during a test. The new technology was created to try to keep New York City subways from flooding.

Engineers at ILC Dover are trying. They're testing another new technology called the resilient tunnel plug. Imagine a big balloon that inflates to plug up a tunnel.

"I think we're pretty happy it deployed and then took a shape that we wanted it to," says engineer Jon Hinkle. "But it's the first step in a long test process we have that goes into developing anything."

Still, Cadogan says there's real pressure to get these technologies ready for prime time. "We're doing everything we can to move as fast as possible because we won't have the opportunity to ask the storm not to show up," he says.

Cadogan says everyone on his team was very happy when Hurricane Joaquin steered away from the East Coast. But he says it's a reminder that they need to get these devices in place before the next storm comes ashore.