Accessibility links
Sculptor Turns Rain, Ice And Trees Into 'Ephemeral Works' British artist Andy Goldsworthy's sculptures melt and decay. "It's not about art," he says. "It's just about life, and the need to understand that a lot of things in life do not last."

British artist Andy Goldsworthy works in the fields and forests near his home in Scotland using natural elements as his media. His pieces have a tendency to collapse, decay and melt, but, as he tells Fresh Air's Terry Gross, "It's not about art. It's just about life and the need to understand that a lot of things in life do not last."

The list of elements Goldsworthy has worked with includes ice, snow, mud, wind and the rising tide. In one piece, he used twigs to fashion a giant spider web hanging from a tree. In another, he decorated a stone wall with sheets of ice. He has also lain in the rain to create "rain shadows" in the shape of his body on city streets.

Goldsworthy refers to his creations as "ephemeral works." He says, "When I make an ephemeral work, when it's finished, that's the moment that it ends, in a way."

Though Goldsworthy has also worked with more enduring materials, he says that using temporal materials is a reflection of the world we live in. His materials, he says, "Come raw from the ground and have all the irregularities and peculiarities because of that."

But Goldsworthy's ephemeral creations aren't completely lost to audiences upon completion; a new book, Andy Goldsworthy: Ephemeral Works: 2004-2014, presents a collection of photographs of his work. There's also an exhibition of Goldsworthy's photos opening Oct. 22 at the Galerie Lelong in New York. 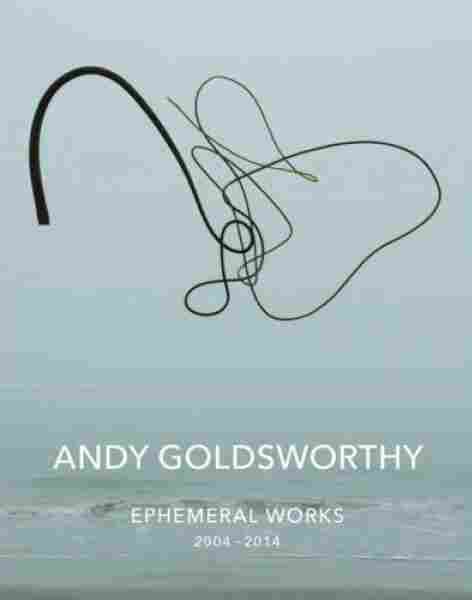 On why he doesn't see himself as "designing" his works

Design implies a sense of mapping something out, and then you follow the plan; [but] these things grow, and the process of making it parallels that of growth. So in the making of a work — layer by layer, stone by stone, branch by branch, leaf by leaf, petal by petal, one being added to the next — something grows in front of you. And the process of growth is obviously critical to my understanding of the land and myself. ... It's a lot more unpredictable, the process is far more unpredictable, and with far more compromises with the day, the weather, the material.

On rebuilding a piece that keeps collapsing

This particular piece [a tree stump with a stone wall inside] — it has fallen down now three times: three days, three collapses. The actual act of collapse and the attempt is becoming interesting enough to become the work. I may have bitten off something I cannot make here. I don't know if I will be able to achieve what I want to; or I will, with a huge amount of luck and chance. But if I don't, I think the act of building and rebuilding, collapse, could become the work. ...

Failure is really, really important, but failures have to hurt. ... And if I start making this work with the intention of it collapsing, then I've lost that intensity of the will for it to succeed, which makes the failure that much more poignant and significant. So there's a really odd sort of state of mind that I guess I get into when I'm making these works, that is necessary for me to extract the finished piece [and] extract the right kind of feeling for the work as I'm making it. ...

To achieve what I want, to achieve the works that I make, I have to be fully committed to them succeeding. I couldn't make them otherwise. And you cannot feel that commitment without feeling or having a deep sense of loss when they do collapse or fail, and that's inevitable.

On working with ice

We generally don't get these severe winters [in Britain] and when it does get below freezing and it's cold enough for ice to form, then that changes the whole landscape and it makes the landscape a different landscape to the one that I've worked with previously. And I want to understand that — the relationship of cold, or what the cold is, to the land. Many of the things that I've done in ice almost reflect those things that I've done in stone, so you can learn a lot about stone by working with ice, and I can learn a lot about ice by working with stone.

But the big tension of the ice works is that they're often made when it's cold enough to freeze one piece of ice to another, and the temperature very rarely stays below freezing all day long in Britain. So I typically will get up very, very early, when it's dark, and I'll start working in the dark, which can be difficult because I can't really see what I'm doing. So I can freeze ice to ice and I can work very, very quickly, and then the temperature starts to rise, and the work slows down. And then, if it stops freezing, the work collapses. But if I can get through the midday period, then I often try to find places where the sun can't reach. ... There's a huge number of things that are occurring with the ice works which fascinate me enormously, but it's driven by this kind of frantic race against time.

These are outdoor works. So when it rains, I lay down or I find a surface quickly that I think will produce a good rain shadow, and I lay there, and when it's wet enough, I get up and there is left me — my imprint, my shadow. That sounds really quite simple, but it is beautifully complex. ... Sometimes it stops raining when I'm half-way through. Sometimes I can lie there for an hour waiting for the rain. And other times it's over in four or five seconds. Often I do them on video, so you have the whole film of laying down and then me getting up and leaving the shadow. ...

I just concentrate on the rain. I've learned so much about rain — the different kinds of rains, the rhythms of rains. And people will say, "Oh, why don't you just use a hose pipe?" That would be totally pointless. The point is not just to make the shadow, it's to understand the rain that falls and the relationship with rain and the different rhythms of different rainfalls.