Accessibility links
'Steve Jobs': As Ambitious As Its Title Character Danny Boyle's new biopic, Steve Jobs, is a look at the man who made Apple mean computers, not fruit. NPR film critic Bob Mondello says it's an invigorating story told in three acts of crisis. 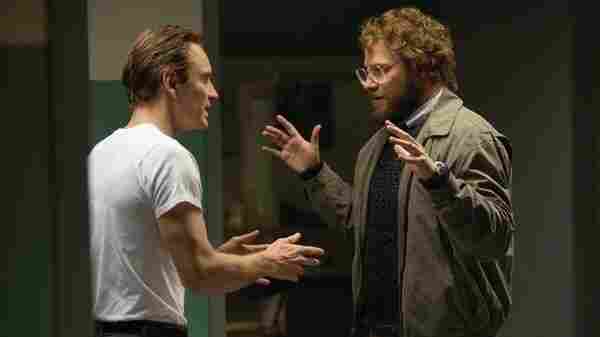 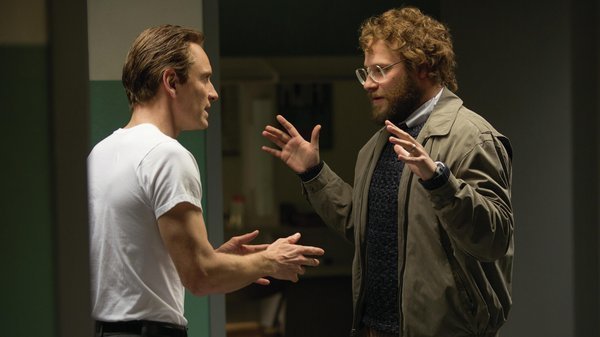 You may feel you've been here before: the story of a man who uses technology to bring millions of people together, but who can't seem to figure out how to connect with the people who are actually around him.

Screenwriter Aaron Sorkin told that story a few years back in his script for the Facebook movie, The Social Network. Now, in Steve Jobs, he's got a strikingly different, equally riveting take centered on the guy who put music in your pocket and gave the world a personal computer that said "Hello" — ideas that sounded crazy back when most of what computers did was make spreadsheets.

The film begins with a 1974 video clip, not of the title character but of sci-fi author Arthur C. Clarke, speaking in a room dominated by an enormous industrial computer, about a then almost inconceivable future when average Joes would have computers in their own homes. He has to convince a skeptical interviewer that this might possibly be a good thing.

That year, a 19-year-old Jobs would've been planning a trip to India to study Buddhism, but in the next shot, we meet him a decade later, as he's about to unveil the Macintosh personal computer to an audience whose appetite has been whetted by an Orwellian Ridley Scott commercial titled simply "1984." The commercial, which aired during the Super Bowl, didn't show the product, because the product wasn't ready yet. And as Jobs, played with ferocious intensity by Michael Fassbender, stands backstage, preparing to introduce it, it still isn't. For some reason, it won't say "Hello."

So he's badgering, insisting, cajoling, threatening — doing whatever it takes to get his tech team, led by a panicked Andy Hertzfeld (Michael Stuhlbarg) to promise the Mac will talk on cue.

How he earns the loyalty of people who look to him for approval and never, ever get it is at once the crux of the film and its great mystery. There's Apple co-founder Steve Wozniak, played explosively by Seth Rogen, who notes that Jobs can't write code, isn't an engineer or a designer, and is still being described in the press as a "genius."

"What do you do?" he asks in exasperation.

And Woz is hardly the only person Jobs ticks off. There's the mother (Katherine Waterston) of a daughter (Makenzie Moss, then Perla Haney-Jardine) he refuses to acknowledge; the marketer/right-hand/conscience who enables him (Kate Winslet); the multitude of hangers-on who have to make things actually work ... hard feelings, every step of the way

Sorkin and director Danny Boyle give the story a three-act structure — each act playing out in real time — all of it crisis time in the half-hour or so just before three of those product launches Jobs was so famously good at. First the original Mac. Then the attention-getting but wildly overpriced NeXT CUBE in 1988 after Jobs had been fired from Apple by John Sculley (Jeff Daniels), the former Pepsi exec he'd helped install as CEO. And finally, in 1998, after Apple had hired him back, he premieres the egg-shape iMac that would set the company on its industry-dominating path.

The film's tension comes partly from a raft of terrific performances — everyone's good, and Fassbender's stellar — and partly from juxtaposing Jobs' public and private personas. He could make cheering audiences believe he was changing the world, but backstage ... not so much.

If you have a sharp eye, you'll note a difference in texture as the film moves through these three launches. Boyle shoots the first section in 16 millimeter, the second in considerably less grainy 35 millimeter, the third in glossy, crystalline high-def — a visual echo for the technical advances Jobs is talking so passionately about. And talking, and talking in Sorkin's hard-charging, superarticulate, somehow still emotionally resonant way.

The film feels so electric while you're watching, it's hard to believe that after two hours, it doesn't even get to the iPod, let alone the iPhone. Maybe they're leaving themselves room for Steve Jobs 2? Or rather, Steve Jobs ... what would the Apple folks call it? Yosemite and El Capitan are their operating systems. Maybe Steve Jobs Half Dome. They'll announce it but it won't be available for a year. And it'll cost an extra $100. And the ticket'll require a new adapter.