Accessibility links
'Lime Street' Bewitches With Mystery And Mayhem David Jaher's account of Harry Houdini attempt to debunk Boston society psychic Mina Crandon mixes history with high-wire theatricality — even though most readers will know who came out on top. 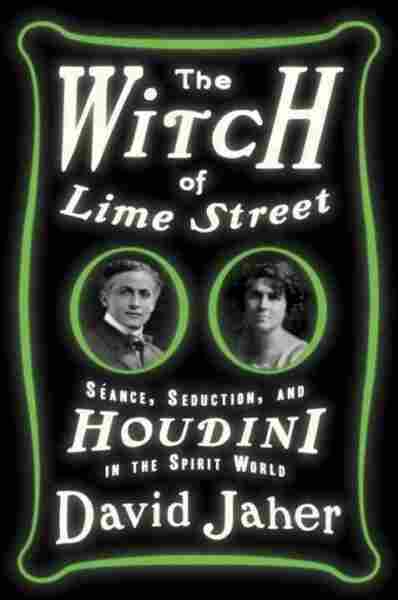 The Witch of Lime Street

Seance, Seduction, and Houdini in the Spirit World

Any historical account worth its salt knows this underlying truth: The two fighters in any face-off are never alone. They stand atop a hundred things that buoyed and buffeted them until they came to be staring one another down. When Harry Houdini (yes, the legend) showed up at 10 Lime Street in Boston to prove Mina Crandon (who? Exactly) was a fraud psychic, they were carrying all the weight of their age behind them — and they both knew it. They don't meet until more than halfway through David Jaher's utterly spellbinding The Witch of Lime Street, and by the time they come face to face, there's as much electricity on the page as in the séance room.

The Witch of Lime Street painstakingly sets its scene, which spans more than a decade and involves so many interrelated figures that you almost expect a list of dramatis personae. After the devastating losses of World War I, Spiritualism swept America and Europe; there was an understandable appetite for evidence that the dead didn't suffer, that they weren't really beyond reach. And in an age with such leaps in science and society, why wouldn't it seem possible? You couldn't explain radio waves, but you got the broadcasts all the same; could undead communiques through the ether really be dismissed? Women had shaken off the corset and danced all night; with such sensual power, why wouldn't they also control the ectoplasm of the other realm? Sir Arthur Conan Doyle, of all people, was leading the movement — he'd invented the most famous detective in the world, but that was the Victorian era: Times had changed.

Beyond The Grave: Contacting Houdini

It was not, however, good enough for Harry Houdini. The magician and skeptic began to supplement his escape artistry by debunking any psychic or medium whose tricks caught his attention. When Scientific American set itself the task of definitively proving or debunking mediums, Houdini became the ringer on their jury, exposing one medium after another. But when they set their sights on Mrs. Mina Crandon — a medium from the right side of the tracks whose séances were famous for their results — they thought Houdini must at last have met his match.

It's a delightful history, a captivating mystery, and thanks to Jaher's stylish flourishes, even the big reveals maintain an air of high-wire theatricality.

Jaher writes with a novelist's panache about the intricacies of the egos in play (Houdini's and Doyle's more than most, though several contest judges give them a run for their money). With the result something of a foregone conclusion — you'll notice "psychical research" is not currently a household industry — it's all the more impressive that Jaher builds the sense of mystery effortlessly, without seeming as though he's actually withholding any of the key information about the society medium who would rock Scientific American. He chronicles Mrs. Crandon's social circle with a mixture of poetic sympathy and journalistic distance. (And he backstories her husband Dr. Crandon with a beat of the what-the-hell candor that makes this book such a page-turner: "He became instructor of surgery at Harvard, and in that position made extensive use of cadavers. He liked to point this out to strangers at parties, for some reason.")

But like any good magician, Jaher has other tricks up his sleeve. As the plot thickens, we begin to see macabre glimpses of things falling apart: examples of Houdini's short temper, power struggles between journalism and academia, hints of Mina's personal and family demons. It was a raucous age, and The Witch of Lime Street makes sure its spooky showdown happens smack in the middle of the action. It's a delightful history, a captivating mystery, and thanks to Jaher's stylish flourishes, even the big reveals maintain an air of high-wire theatricality — like any good magician, The Witch of Lime Street knew what we wanted all along.