Accessibility links
Prize By Design: How The Nobels Put Artists On Deadline Each Nobel Prize winner gets a diploma with original artwork interpreting their achievement. That means artists have to figure out how to portray, say, a Higgs boson — and they have to do it quickly.

Most of this year's Nobel Prizes were awarded earlier this week — and the last, for economics, will be announced on Monday. For many of the winners, the prize marks the culmination of a lifetime of work. Yet, for a small group of artists, the Nobel Prize announcements actually spell the start to a couple weeks of deadline-driven labor.

Along with their medals, certificates and cash awards, winners also receive original pieces of art, meant to capture the essence of their accomplishments. That means artists like watercolorist Hasse Karlson have been watching the announcements closely. He's been tasked with producing the art for the economics prize this year, and will find out soon who the winner — or winners — are.

"So if they are going to be three, then it will be stressful. So I hope they will be one or two this time," Karlsson says, laughing.

Karlsson only has about a week to get colors and a draft to a calligrapher so she can then match her ink to his color palette. The final art is due in mid-November, ahead of the December awards ceremony.

Karlsson made three paintings last year — for the physicists who invented blue LED lights. He painted watercolors of figures in dark overcoats, bathed in light spilling from storefront windows and streetlights.

"I remember that I was thinking that today's daylight can be restored and illuminate night and the light is awakening humanity," Karlsson says. "I was thinking about that when I did my paintings."

That assignment was unusually straightforward. After all, the Nobel was honoring light — a topic well-suited to the visual arts. Other subjects are tougher. 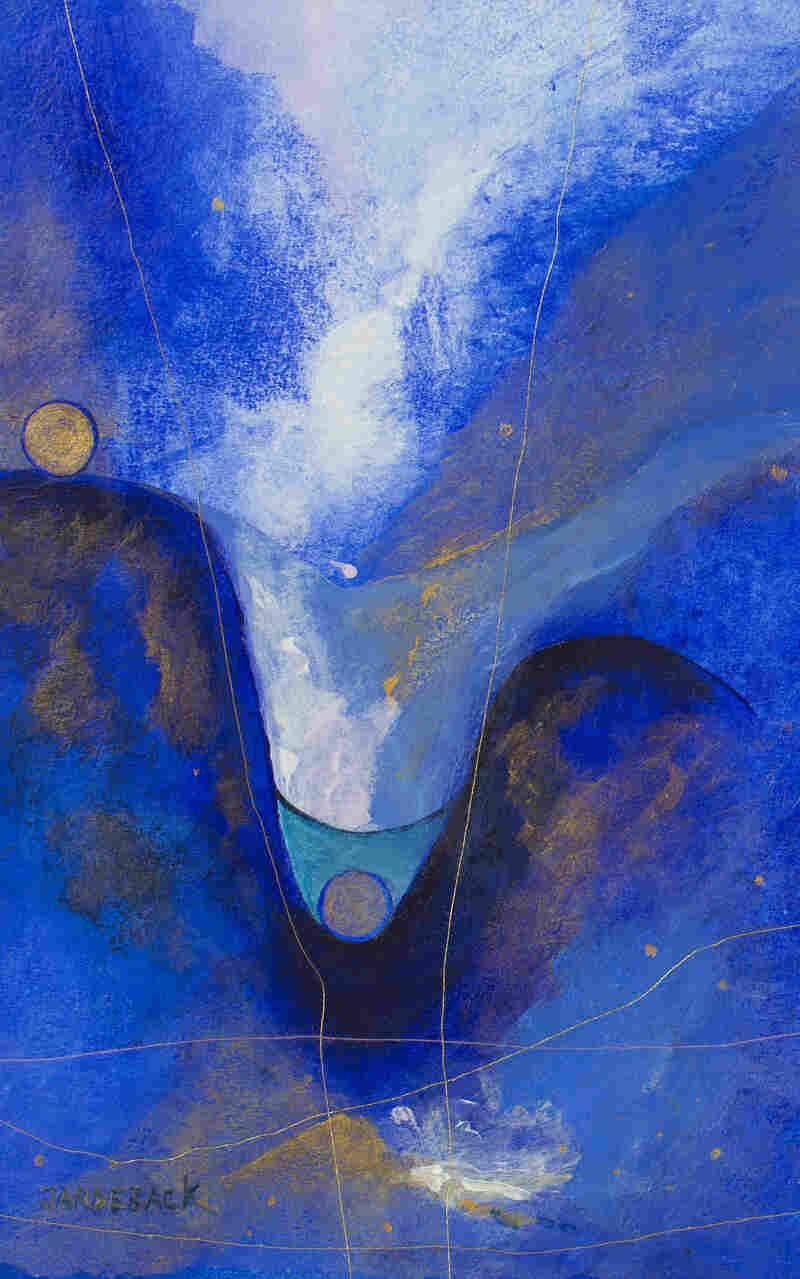 A closeup of Susanne Jardeback's work on the certificate for 2013 physics laureate Peter Higgs -- a collage inspired partly by the divine, and partly by a sombrero. Lovisa Engblom/Courtesy of and copyright (c) The Nobel Foundation hide caption

Susanne Jardeback made collages for the 2013 physics laureates Peter Higgs and François Englert. They theorized the existence of a particle called the Higgs boson. So, Jardeback asked another scientist to describe how she could represent the subatomic particle.

"She said it's not easy to describe it easily," Jardeback says. "It's very, very hard, but you could try to do something with a Mexican hat."

In other words, if you graph the behavior of the Higgs boson, that graph looks something like a sombrero. So, she incorporated that image into her collage.

"And in the background," she says, "I could use some sky that was holy" — holy, because the Higgs boson is also known as "the God particle." That nickname inspired a color palette of midnight and aquamarine blues with highlights of celestial gold.

Jardeback also created the artwork for 2012 chemistry Nobel winner Dr. Robert Lefkowitz, which Lefkowitz still has hanging on the wall of his office.

"I think it's a very neat and a very meaningful thing, yes," Lefkowitz says. "That's something which, like everything else about the Nobel Prizes, appears to distinguish it from other awards."