Accessibility links
'Shards' Puts A Fantastic Twist On Jewish Mythology Matthew Kressel kicks off an Old Testament-flavored fantasy trilogy with this story of a man, abducted by a demon, who learns he's one of 36 hidden saints whose existence preserves the Earth. 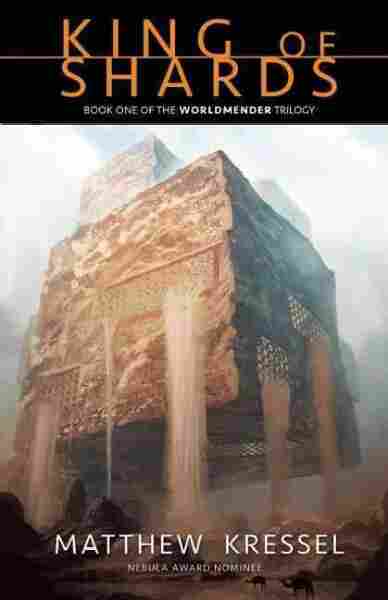 Whether or not you know the term "portal fantasy," you know what it means. In portal fantasies, a doorway — either literal or virtual — opens up between the real world and some magical land where strange beings live and strange things happen. The unassuming hero passes through this portal, only to have his or her view of reality turned upside down. It's a trope as comfortingly familiar as Narnia or Wonderland (although portal fantasies have taken a darker turn in more recent works like Stephen R. Donaldson's The Chronicles of Thomas Covenant and Lev Grossman's The Magicians). And Matthew Kressel puts his own stamp on it in King of Shards.

King of Shards is Kressel's debut novel, and it's the first installment of a trilogy titled Worldmender. It's a good thing he's planning for three books in the series, because he's bitten off an awful lot to chew. In King, Daniel Fisher is a young social worker in New York who's about to get married — that is, until the sudden appearance of a white-haired, white-eyed old man leads to his mind-bending transportation to Gehinnom, a desert world that's trapped in its equivalent of the Bronze Age, despite being eons older than our own civilization.

Gehinnom is a full-fledged fantasy realm full of weird creatures and magic, but as Daniel discovers, it's not entirely alien to Earth. The old man who whisked him away, who has now taken the form of a dog, is named Adar — but it's only one of many names he's known by in Gehinnom. Daniel, who's Jewish but not especially devout, begins to piece together the familiar terminology that he remembers hearing from his Hasidic grandmother: Gehinnom, better known to gentiles as Gehenna, is a hellish place where sins are purged and curses abound. Along with Rana Lila — a native of Gehinnom who wishes to become an architect regardless of the ban on women holding such a post — Daniel encounters numerous deities, demons, places, and concepts whose names echo down from the Hebrew Bible and Jewish mythology.

Rather interpreting things strictly literally, though, Kressel exercises plenty of artistic license in his repurposing of myth and mysticism. Daniel, it turns out, is a Lamed Vavnik, one of the hidden saints who unwittingly anchors Earth's existence — and by extension the rest of the cosmos, which is made up of innumerable shards of failed universes. The metaphysics of King are vast and staggeringly complex, a feast for hardcore fantasy fans. Unfortunately, that complexity often comes at the expense of the book's main characters. Daniel and Rana feel conspicuously flat at points, particularly in their stilted banter ("Nice try, pebble head," is a favorite retort of Rana's) and clichéd backstories. Daniel is most compelling not when he's in the thick of turmoil and peril, but when he poignantly, quietly reminisces about his fiancée back on Earth, Rebekah — an almost too-perfect woman who turns out to be not at all what she seems.

People not being what they seem: It's one of King's big themes. Almost every one of Kressel's characters has multiple names, shifting identities, betrayals, and secrets — and occasionally, a noble yet tragic reason for deception. Another characteristic of the classic portal fantasy is the hero's split motivation and loyalty: On one hand, he wants to help save the strange world in which he's found himself, and on the other hand, he wants nothing more than to get back home to Earth. Daniel is cut from this same cloth, and that conflict gives King an archetypal power that overcomes its deficiencies; this radical reinvention of Jewish faith and folklore, not to mention the portal fantasy, is deeply faithful in its own way. "One city's rubble is the next city's foundation," Kressel writes. Not only does that simple, profound idea underpin King of Shards' plot, it's the method to the book's majestic, resonant, reality-twisting madness.