Accessibility links
Elvis Costello's 'Unfaithful Music' Is Defiantly Fun The musician's new autobiography doesn't follow the conventions of memoir — it jumps around in time from his childhood to his days in the pop-rock trenches, and it doesn't shy away from ugly moments. 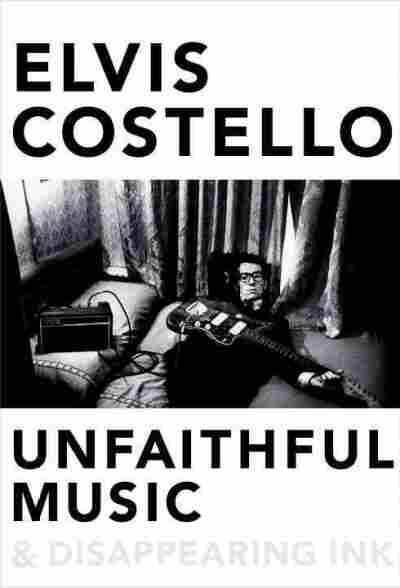 In all seriousness, Costello's fans don't like him because they share his nerd aesthetic. They like him because he brought inventive and hyperliterate lyrics to pop music, a genre frequently dominated by loud and vacant people shouting their opinions about cars (good), partying (good), alcohol (good), teachers (bad) and hot teachers (very good).

In short, writers like Costello because he has always taken writing seriously. That's obvious to anyone who pays attention to his lyrics, and it's even more apparent to anyone who reads Unfaithful Music & Disappearing Ink, his charming new autobiography. The book is refreshingly free of salacious gossip and needless name-dropping; it's an intelligent self-assessment from a musician who went from angry young man to elder statesman of pop.

Unfaithful Music doesn't follow the path of a typical autobiography, which is fitting for a singer who has spent his entire career defying expectations. The book jumps back and forth in time — it's not quite stream of consciousness, but it's something close to that. That's not to say it's difficult to read; it's quite the opposite. Costello comes across as a veteran of new wave and punk, offering stories — some sad, some funny — about his days in the pop-rock trenches.

Much of the book explores Costello's childhood, which he remembers mostly fondly. He was born Declan Patrick MacManus in 1954, the son of a successful dance hall trumpeter from whom he learned a love of pop music and older standards. Costello writes about his earliest days with his trademark self-deprecation: "I was born in the same hospital in which Alexander Fleming discovered penicillin. I apologize in advance that I have not been the same boon to mankind."

Musicians often use their memoirs to explain the stories behind their best-known songs, and while Costello does this, it's a little bit oblique. That's a great thing — it lets his songs retain their mystery, while providing some context for their inspirations. As Costello explains: "Even when songs have their origins in real events or are portraits of actual people, they do not remain in that realm very long, at least not if they are to endure."

Costello is well-known for his songs of heartbreak and romantic love gone wrong, but he mostly steers clear of the subject of his own marriages. He mentions his second wife, former Pogues bassist Cait O'Riordan, only briefly, which is perhaps for the best; the two had a disastrous marriage. "I went inside a room, turned off all the lights, and could not find the door," he writes. "For eighteen years." By contrast, his words about his current wife, jazz singer Diana Krall, are poignant and sweet. The angry young man can't stay angry forever.

Unfaithful Music is a defiantly fun autobiography, and while Costello doesn't shy away from the incidents that threatened to destroy his career (in particular, a drunken incident in 1979 in which he referred to Ray Charles and James Brown with the N-word), he also includes the joyous times of his life. And those are the best parts — he's almost unable to contain his glee as he recounts his collaborations with Paul McCartney, Allen Toussaint and The Roots. He writes about them like a fan, and his happiness is contagious.

It's an unexpected memoir from a musician whose creativity and brilliance changed pop rock forever. "The trouble with finishing any autobiographical tome like this," Costello writes, "is that for every mildly diverting tale or precious memory, you eventually arrive at this thought: I don't care much for the subject." He doesn't have to, and neither does David Lee Roth. His fans care for him more than enough.