Accessibility links
'Spring Awakening' Returns To Broadway — In Sign Language The hit musical only closed six years ago, and now it's back, in a well-reviewed revival featuring hearing and deaf actors, who sing and sign during the performance. 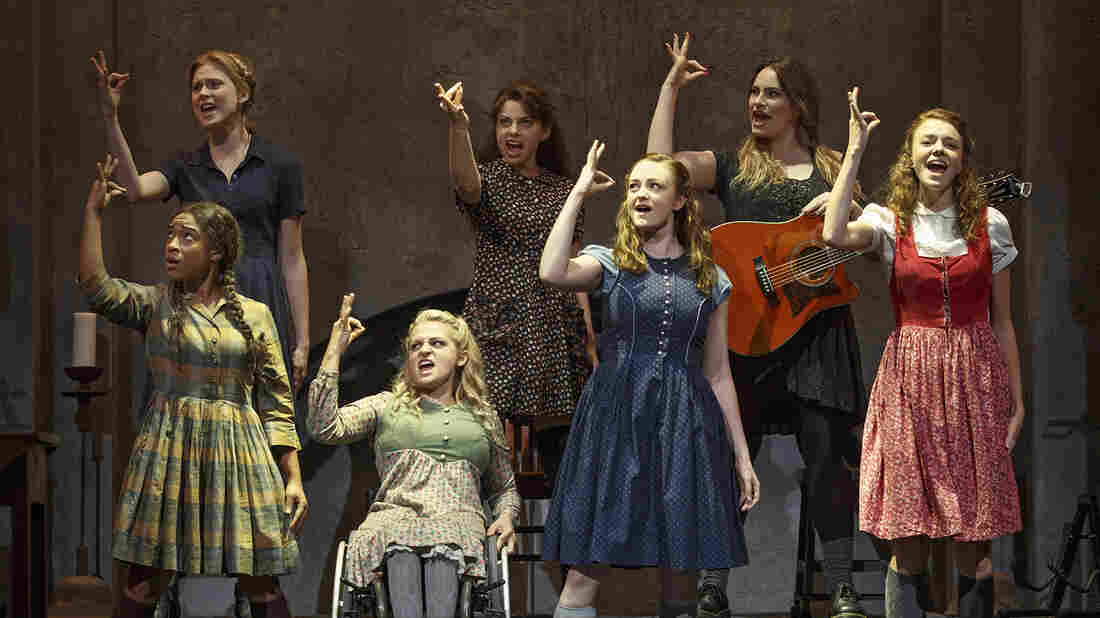 In the new Deaf West production of Spring Awakening, the deaf lead actors have doubles in the background who speak and sing for them, and everyone signs. Joan Marcus hide caption 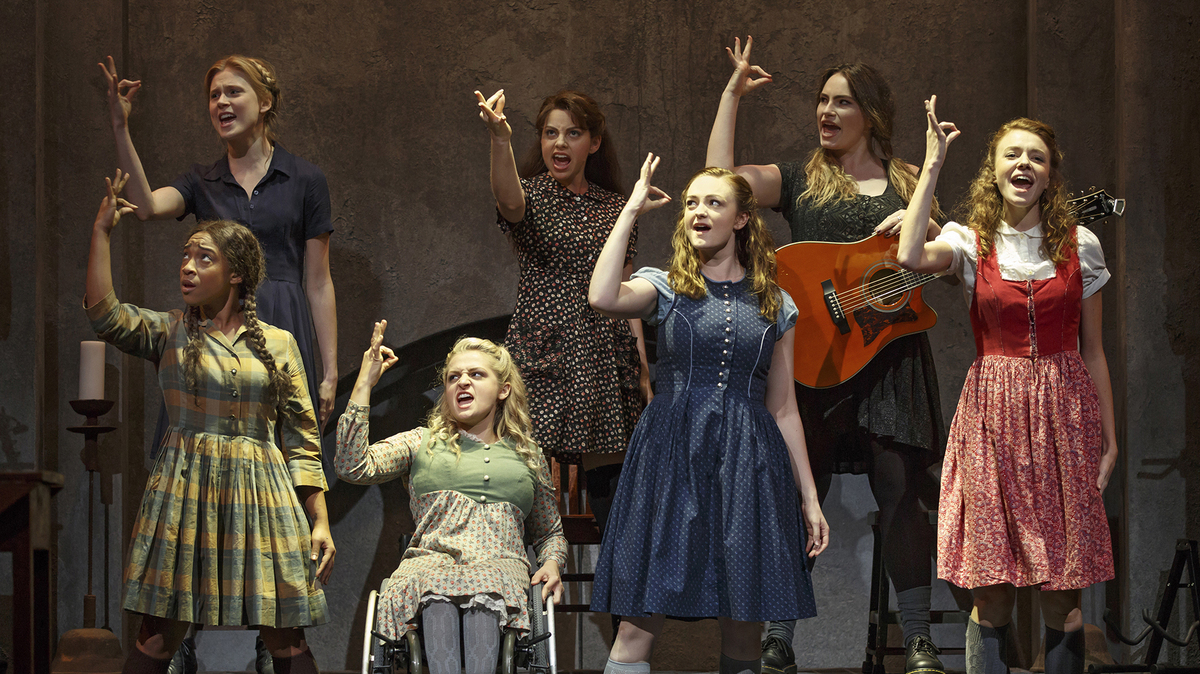 In the new Deaf West production of Spring Awakening, the deaf lead actors have doubles in the background who speak and sing for them, and everyone signs.

One of the best-reviewed shows on Broadway right now is a revival of a musical that closed there only six years ago. Spring Awakening is based on a play about German teenagers in the 1890s. Part dark morality play, part rock opera, the musical swept the 2007 Tony awards and made TV stars of its two main leads, Leah Michele (of Glee) and Jonathan Groff (of Looking).

The current revival, by Deaf West, features a mix of hearing and deaf actors. But everyone signs, throughout the entire show. The deaf lead actors are shadowed by doubles, hearing actors who voice their roles. But the doubles mostly remain discreetly in the background, to focus attention on the deaf actors. Still, they look at each other, egg each other on, and comfort each other. Somehow, this adds an entirely new dimension to the show — it's as if you can see each characters' subconscious.

"I loved it," says writer Sara Novic, who is deaf. "I cried at the end. I really cried."

Novic has seen plenty of plays where sign language interpreters are stuck on the side of the stage. That means to see them, deaf audience members have to sit on the side too.

"And you kind of look at the interpreter, and through the interpreter, back and forth a lot," she says. "Subtitles are easier." Novic means subtitles are less distracting than good interpreters' expressive performances. Novic had never before seen a mainstream show that assumes deaf audiences are as valuable as hearing ones.

"It felt awesome," she says.

This revival was directed by Michael Arden, a hearing actor with a long history with Deaf West. Arden feels that Spring Awakening's story lends itself to a reinterpretation with deaf characters. After all, it's about a tragic failure of communication — and people being made to feel their bodies are wrong and bad. And it resonates historically. In 1880, 10 years before the play is set, a huge international conference on deaf education in Milan affected deaf culture for generations.

"It was decided, after much deliberation, that the only way deaf students could be fully integrated into society would be if they learned to speak, read lips and not sign," Arden explains. "All sign language [was] banned in schools worldwide."

That's reflected in this staging of the musical. In it, deaf students are punished for signing and painfully forced to vocalize. And it comes out too when a hearing mother attempts to tell her deaf daughter about sex.

"The actor who is Wendla's mom is signing in this clunky way," Novic says. That underscores the chasm of communication between them. As the mother (played by Camryn Manheim) fumbles her way through her explanation, she signs a triangle: Thumbs together, forefingers pointing down in her lap.

You have to look at each other when you're signing. It forces actors to actually play a scene together, rather than playing their own scene.

"She signs 'vagina,' " Novic explains. "But really quickly, she moves it up to her chest so it looks like a heart," leaving Wendla baffled and with a critical lack of information. It's a literal sign of the repression that sets the musical's main tragedy in motion.

The character is surrounded by a coterie of girlfriends, one of whom happens to be in a wheelchair. She's played by Ali Stroker, the first person in a wheelchair to appear on Broadway. "I was in a car accident when I was 2 years old and became paralyzed from the chest down," she says.

Other actors have played characters in wheelchairs, or performed in them while temporarily injured. Stroker is also the first wheelchair user to graduate from NYU's Tisch School of Drama. Her dressing room had to be modified for her. The Brooks Atkinson Theater was built in 1926, long before the Americans with Disabilities Act. Even its stage is treacherously uneven, which took Stroker by surprise during the first rehearsal.

"I'm signing, and my hands are off my wheels" she remembers with a laugh. "And all of a sudden, I'm like ... rolling away!"

Now, another actor holds her wheelchair at that point — one of many ways the cast depends on each other, says actor Andy Mientus. He knows Spring Awakening very well — he was also in the first national tour of the original production. For the revival, Mientus had to learn how to synchronize with his deaf cast mates.

"There's hundreds of internal cues in the show," he says. "There's an unseen tap on the shoulder or flick of a light that lets the deaf actor know where we are in the music."

And that makes the cast focus in a way that's unusual. "You have to look at each other when you're signing," says Arden. "It forces actors to actually play a scene together, rather than playing their own scene."

Arden experienced this himself when he was trying out for the role of Tom Sawyer in Deaf West's production of Big River more than 10 years ago. "I walked into an audition room never having met a deaf person," he recalls. He was nervous upon meeting the deaf actor playing Huck Finn. Two interpreters joined them.

"And we were able to just look at each other and play this scene. And I was so moved by that ..." Here Arden chokes up, even more than a decade later. "The first time sharing this art form with someone from a culture I thought I could never share it with."

It's emotional work, to find a musical's voice with mouth and hands. And it's not a compromise, Arden says. It can make it better.