Accessibility links
'The Rest Of Us' Is Apocalypse-Adjacent Patrick Ness' wry new young adult novel wonders what happens to the normal kids who have to make their lives in the margins of the explosive adventures depicted in mainstream young adult fantasy.

'The Rest Of Us' Is Apocalypse-Adjacent

'The Rest Of Us' Is Apocalypse-Adjacent 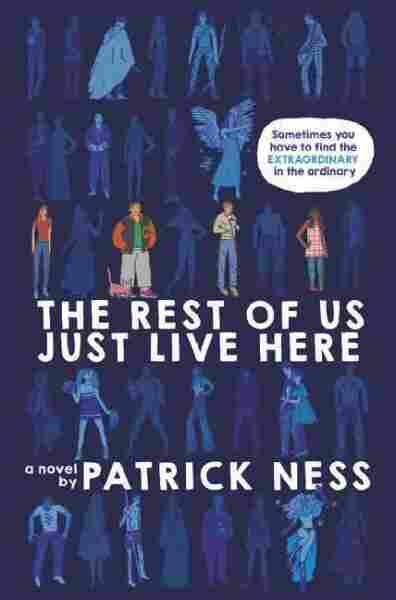 The Rest of Us Just Live Here

For lifelong literature fans, there's a special kind of joy in stories that play with stories. Books like John Myers Myers' Silverlock, Jasper Fforde's Thursday Next series and Mike Carey's Unwritten comic all operate as though book covers are permeable, allowing characters to slip off their pages and sneak along the bookshelves to see what's going on in the next tale over.

We talk about "falling into a book" or "getting sucked into a story" because the best reads feel like real physical places, and these kinds of meta-stories play with that feeling to see what it says about how characters work. Patrick Ness' tongue-in-cheek young-adult novel The Rest Of Us Just Live Here doesn't co-opt classic literature, but it still feels like that kind of book, like whatever was shelved next to it sprung a leak, and some drama seeped in from a completely different world. That's entirely deliberate; Ness' story takes place on the edges of a supernatural romance, where inimical otherworldly powers called the Immortals are invading, and only an emotional, exceptional group of teenagers can stop them.

The twist: Ness' book isn't about those kids at all. The Rest Of Us follows a few normal high-schoolers who aren't in charge of averting the upcoming apocalypse. They're more like the dazed, baffled bystanders Buffy saves when Sunnydale's Mayor becomes a giant snake. Or the ordinary teenagers watching from the corners of the school cafeteria as the Cullens play out their mopey vampiric soap operas. Ness' protagonists know something major and magical is going on. They just have their own problems to deal with instead.

Mikey, Ness' first-person narrator, is never going to be the Chosen One. While the "indie kids ... that group with the cool-geek haircuts and the thrift shop clothes" fight battles, gain powers and share life-changing kisses, Mikey navigates a longstanding crush on his friend Henna, struggles with OCD and worries about his anorexic sister. Graduation is looming, with the inevitable separation from his friends. Meanwhile, Mikey's mother is running for national office, and his father is a disintegrating alcoholic. With turmoil at home and school, it's easy to decide that the walking-dead cop with glowing blue eyes is somebody else's problem — especially since this is just the latest apocalypse in a long series.

Ness walks a cautious line with The Rest Of Us Just Live Here. It's nearly a flippant YA satire: The indie kids' adventures are largely expressed in brief chapter headings, but even a slight taste of the story reveals that they have ridiculous names, live wildly dramatic lives and make and discard deep, perfect true-love connections with implausible speed. But the book is authentic and emotional about Mikey's problems, treating his OCD as a serious, compelling medical concern, and sympathizing with his low self-esteem. Ness takes a flippant potshot at John Green's The Fault In Our Stars ("This is worse than when they were all dying beautifully of cancer," Henna says, after the latest indie-kid fatality), but his book does fall squarely into the current "contemporary realistic" YA trend Green helped kick off. The Rest Of Us is playful about the bookshelf tension between YA poles, while still pointedly suggesting that actual teenage problems are more nuanced than Buffy The Vampire Slayer-type metaphorical crises.

If anyone's qualified to weigh the two conflicting extremes of YA fiction, it's Ness. His brutal, brilliant Chaos Walking trilogy is perilously close to the kind of fantasy he's lampooning here, and those books (starting with 2008's The Knife of Never Letting Go) are richer, denser and much more intense than this lighter novel. Judging just on how his own work stacks up, the fantasy stories may have the edge. But The Rest of Us Just Live Here has its own special place on those leaky bookshelves where genres mix and match. It's silly, yet poignant, and smart in the way it maps the current literary landscape, then stakes out a fresh outpost on its extreme borders. No one needs an apocalypse to stir up drama when they're fighting this many internal battles already.