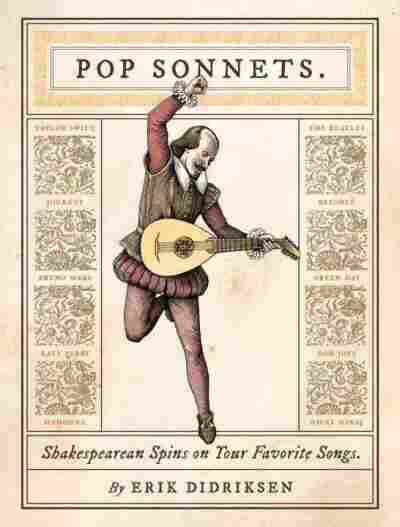 Shakespearean Spins on Your Favorite Songs

Pop Sonnets author Erik Didriksen has been writing poetry most of his life. "I grew up with a knack for rhyming," he says. "When I was little, I used to write my grandparents poems. There's a poem [the family] dug up recently — I wrote an ode to pickles. Which is ridiculous, but this is what you have to write about as a 6-year-old. It doesn't scan at all. It's just lines with rhymes at the end of them."

Didriksen went on to other, more involved ways to use that rhyming talent, including a high-school band and a songwriting stint as part of his bachelor's degree in music technology. And with Pop Sonnets, the 27-year-old New York software developer has achieved something funny, intelligent, and much more complicated than a few couplets about pickles. Pop Sonnets is an outgrowth of Didriksen's popular Tumblr, where every Thursday, he reinterprets a popular song via Shakespearean dialect and through the rigid 14-line iambic pentameter of an English sonnet. In his hands, the opening lines of The Jackson 5's "ABC" — "You went to school to learn, girl/Things you never, never knew before" — becomes this: "Thou hast the hallow'd halls of learning sought/ to see the murky depths of knowledge plumb'd."

Shakespeare fans and poetry lovers both have reasons to be dismissive of a Tumblr-derived book of novelty sonnets, but Pop Sonnets is one of the absolute best of the disreputable breed of impulse-buy humor books. Didriksen brings an authentic dedication to craft and a lively sense of humor to this highly specific project. He's insightful and respectful to his material. Cutting away pop songs' verse/chorus repetition intensifies the lyrical underpinnings. Didriksen's poems strip away the emotion of the music, replacing catchy rhythms with intellectualized remove, until Kesha's "Tik Tok" is revealed as a defiant charm against melancholy, and even Beastie Boys' "(You Gotta) Fight For Your Right (To Party)" sounds elegant, erudite and wistful.

It isn't like craving a Big Mac. You can't just walk out and find a sonnet version of 'Call Me Maybe.' So I said, 'Well, I guess I have to do this one.'

But as sophisticated as the composition gets, there's a devilish amusement in Didriksen's wording, which incorporates puns, complicated wordplay and cleverly elaborate twists on the original songwriting. Some of Didriksen's favorite sonnets are the most technically involved, like Spice Girls' "Wannabe," which hides spice names in nearly every line, from the obvious (pepper, clove, curry) to the obscure (boldo, "time" for thyme, "tarry on" for tarragon). Or Eminem's "Lose Yourself," which had "the most stupidly intricate rhyme scheme of anything I've ever done. Each quatrain, the end rhymes of the first and the third lines rhyme with the fourth and the eighth syllable of the second and fourth lines, and vice versa." Didriksen says he was trying to emulate Eminem's complex rhymes, but the density actually made the poem easier to write: "I think the forced restraint made me know whether a line was working."

Didriksen started writing these poems after running across a sonnet version of Macklemore's "Thrift Shop" he describes as "absolutely one of the funniest things I've ever read." At the time, he was "obsessed" with Carly Rae Jepsen's "Call Me Maybe." "So I read that and said 'There has to be a "Call Me Maybe" sonnet right now.' But it isn't like craving a Big Mac. You can't just walk out and find a sonnet version of 'Call Me Maybe.' So I said, 'Well, I guess I have to do this one.'" He says writing that one was so enjoyable, he followed up with Miley Cyrus' "Party In The U.S.A.," "and within a week, I had a stack of them."

For Didriksen, some of the most canonical pop songs won't work as sonnets: "The Rolling Stones' 'Satisfaction' is just sitting there waiting for me, but the verses are so disjointed, I don't know how to give it a nice throughline. The best ones have a solid story, or I can budget to make it have a story. And then I look for a spot where I can turn a line or an idea in the song into iambic pentameter, and build from there. I always want to start with something that works, whether it's the final couplet or the second stanza, whether it gets me to the real meaning of a song, or it's just a case of 'Oh, that's funny.' Like when I thought of Bruno Mars' 'Grenade,' and I realized 'grenade' rhymes with 'flambéed,' I said, 'Oh, that's perfect. Let's go!'"

Tasha Robinson is a freelance writer and a former Senior Editor at The Dissolve andThe A.V. Club.