Accessibility links
After Decades On Stage, Arthur Miller's Works Defy The Final Curtain The great American playwright was born a century ago Saturday. An activist as much as he was a writer, Miller challenged social ills in playscripts — and set a new standard for the citizen-artist. 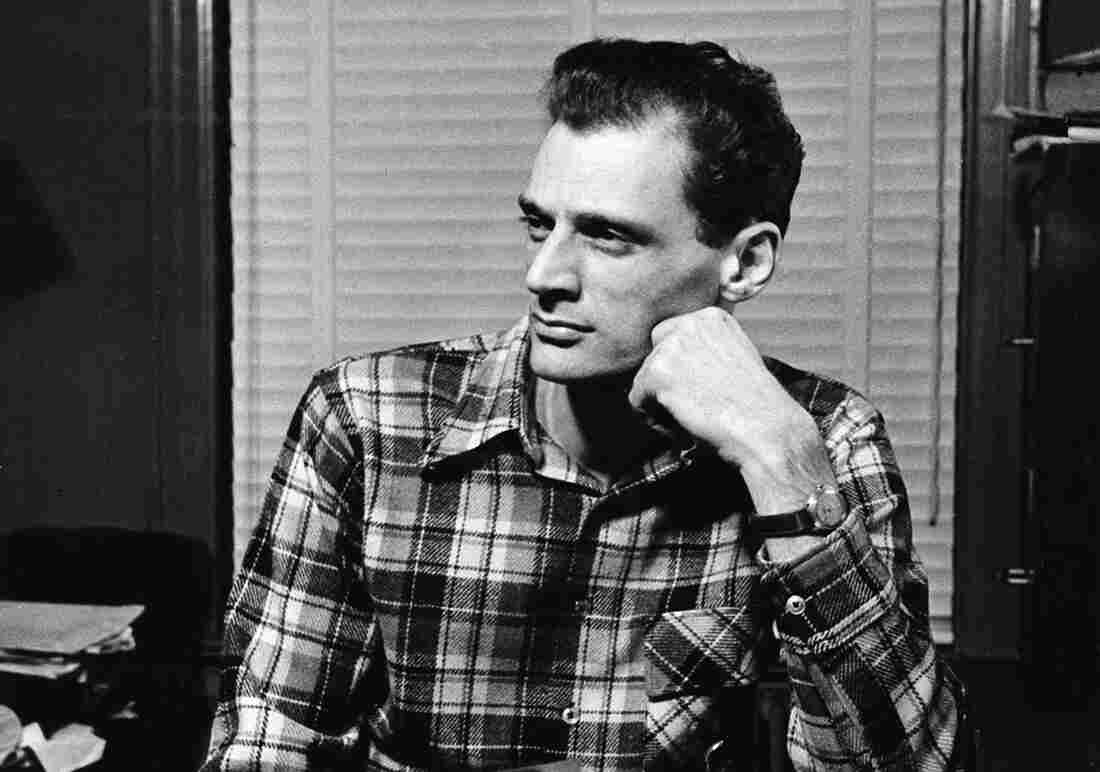 Playwright Arthur Miller sits at his typewriter in New York City in 1949, the same year he won the Pulitzer Prize for drama for Death of a Salesman. AP hide caption 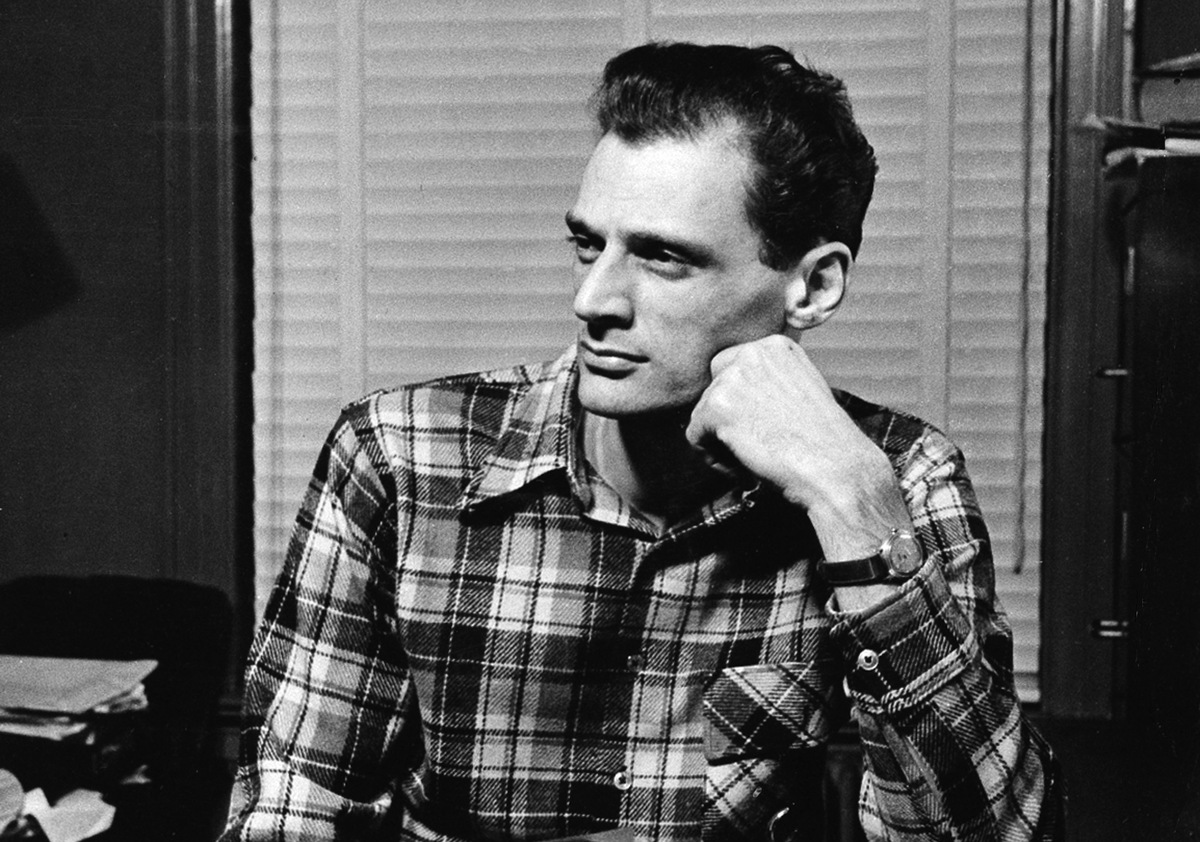 Playwright Arthur Miller sits at his typewriter in New York City in 1949, the same year he won the Pulitzer Prize for drama for Death of a Salesman.

In Arthur Miller's 1949 masterpiece, Death of a Salesman, we're never told what lead character Willy Loman sells — but he's spent a lifetime "on a shoeshine and a smile." His luck finally runs out when his boss lets him go.

"I put 34 years into this firm, Howard, and now I can't pay my insurance!" Loman shouts from the stage. "You can't eat the orange and throw the peel away! A man is not a piece of fruit."

The play spans roughly 24 hours in the mind of Willy Loman, as he drifts from one scene to another in his life. It was a poetic breakthrough in the realism-dominated theater of the day — and just one of Miller's cherished works, which also include The Crucible, All My Sons and A View from the Bridge.

Miller, who was born 100 years ago Saturday, found a new way to tell stories on the stage, and he set a standard for the citizen-artist.

"There was that conscious desire on my part to create a form which would embrace both the social and exterior personalities of people — and the psychological life underneath," Miller told me in 1999, during a conversation at his home in Roxbury, Conn. — not far from where he wrote Death of a Salesman a half-century earlier.

Miller told me he had been trying to write a different kind of play for years. He wrote Death of a Salesman in six weeks.

"And the consequence was the form of Death of a Salesman, which at one and the same time carries forward his business life, his sexual life, his family life. The whole rounded picture. Which you can't do in a straight realistic form," Miller said.

The way he structured his plays is what sets his work apart, says fellow playwright Tony Kushner, who edited the Library of America's Collected Plays of Arthur Miller.

"He absolutely understands what makes a scene, what makes an act, what makes a dramatic arc, and he takes you to extraordinarily difficult and important places," Kushner says. "He's a writer who over and over again could put his finger on an understanding of what lies under social disease."

In Salesman, Miller put his finger on the downside of a society that measures human worth by economic success, a perspective that came from the writer's own experience. Growing up in Harlem in the 1920s, Miller watched his father's successful business collapse during the Great Depression.

Miller said that when he wrote Salesman, the U.S. was entering another dark era: the Cold War.

"We were then pitched into the anti-Communist crusade. And everybody either was being investigated, or was investigating somebody else," Miller told me. "It was a period of bitterness, secrecy, paranoia." 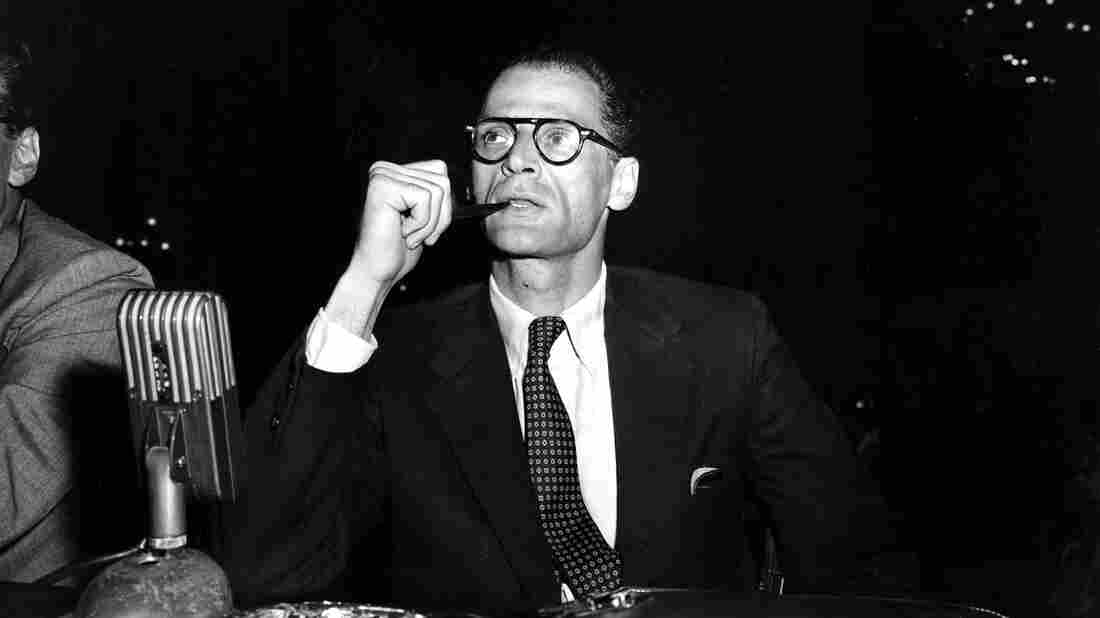 Arthur Miller smokes his pipe at the witness table prior to testifying at a hearing before the House Un-American Activities Committee in Washington, D.C., on June 21, 1956. AP hide caption 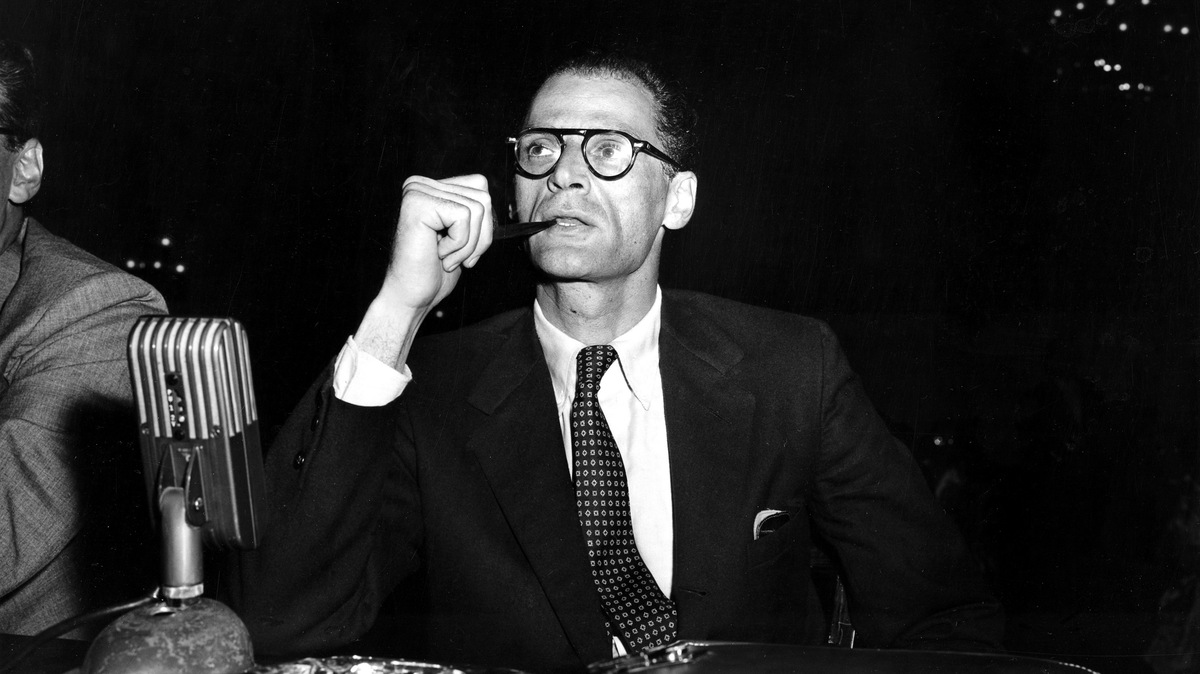 Arthur Miller smokes his pipe at the witness table prior to testifying at a hearing before the House Un-American Activities Committee in Washington, D.C., on June 21, 1956.

Miller's 1953 play, The Crucible, which centered on the Salem witch trials of 1692, was his response to what many called the witch hunts of his own day: the congressional hearings into alleged communists in the American arts community. The play made Miller himself a target.

He was eventually exonerated, but he said the experience affected him for the rest of his life.

His 1955 play, A View from the Bridge, deals with the persecution of illegal immigrants. When his wife's Italian cousins jump ship in Brooklyn, dockworker Eddie Carbone welcomes them — until one of them starts dating his niece. Eddie is convinced the Italian wants to marry his niece just to become an American citizen, so he turns him in, and alienates his own family.

"It's about a man's inarticulacy," says actor Mark Strong, who plays Eddie in the London revival of the play that's coming to Broadway. "A man whose emotional inability to understand the world around him — and we're all trying to make sense of the world around us — but what's fascinating about this is seeing a guy fall apart while trying to do the right thing."

A View From The Bridge: Great Sorrows In Little Souls, American-Style

Arthur Miller took up social causes, in his plays and in life. He became the president of PEN, the organization that defends the rights of authors around the world.

Kushner, a gay activist and the Pulitzer Prize-winning writer of Angels in America, says that Miller was a model for him.

Arthur Miller's personal life was a bit more complicated, however. He left his first wife for Marilyn Monroe. Their marriage ended in divorce. After his third wife died, he took up with a young artist half his age.

But at 83, when I spoke with him, his career was still far from over.

"Well, I still want to do something wonderful on stage. It's an endless fascination," he said. "I've used different styles, I've experimented with different ways of doing things, and I expect I'll continue till I drop."

Arthur Miller's last play opened in Chicago in 2004, just a year before he died of heart failure at the age of 89. Like Willy Loman, his best-known character, Miller struggled with his trade right up to the end.

"A salesman has got to dream, boy," as Willy Loman's friend Charlie says at his graveside. "It comes with the territory."