Accessibility links
With Song And Celebration, Mosque Chips Away At Sunni-Shiite Divide Sunni and Shiite Muslims have been in conflict for centuries. But a mosque in the Bay Area is trying to break down those walls. With music, open mic nights and open arms, they've found common ground. 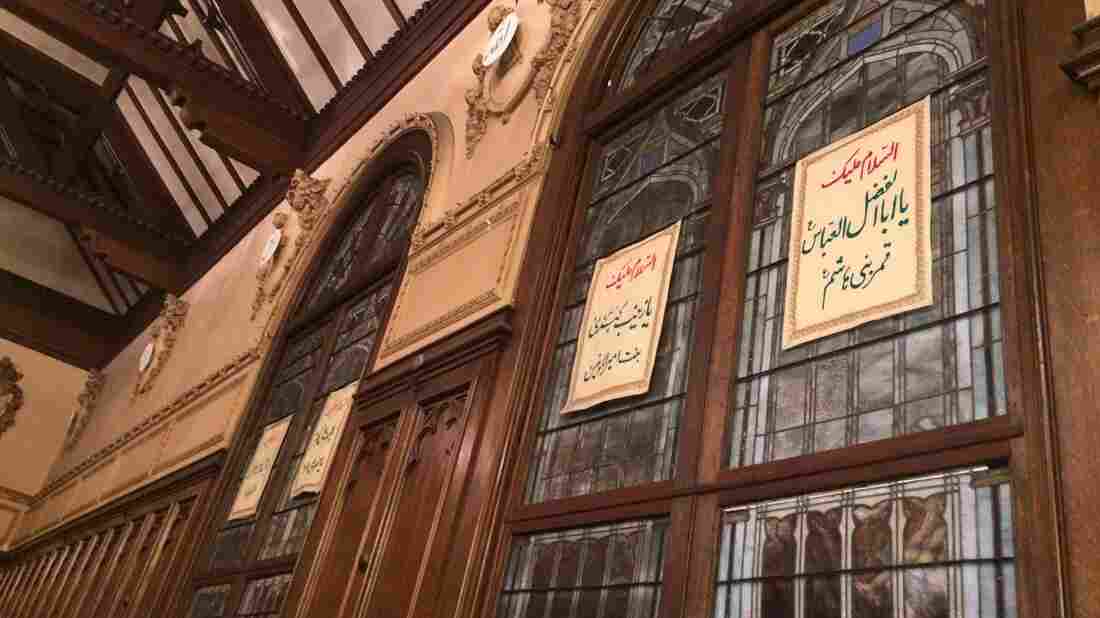 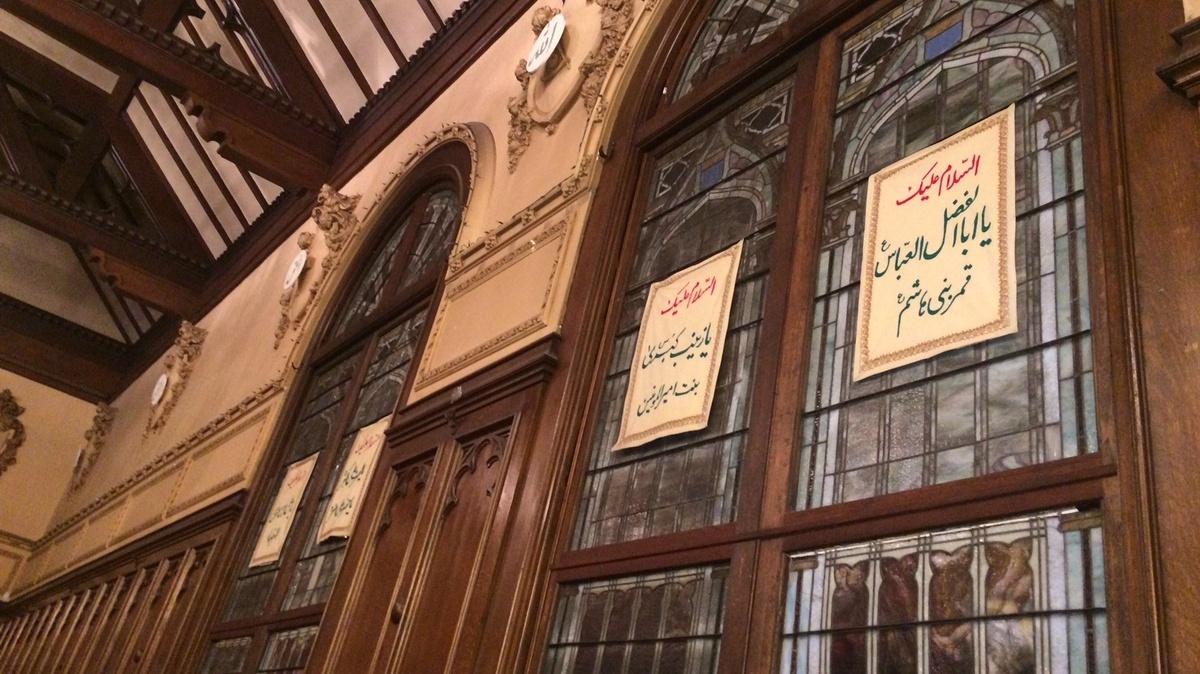 Arabic and Persian calligraphy adorn the tinted windows of the Islamic Cultural Center of Northern California.

The Islamic Cultural Center of Northern California doesn't look like your average mosque. The towering, majestic building — which used to be a Masonic temple — went up in Oakland around the turn of the 20th century. And it has long accrued a distinctive, cherished history.

"Every inch of this building just has a meaning," manager Azita Sayyah says.

Since the ICCNC moved in, the group has been adding another layer to that history, attempting something quite a bit different. The mosque is trying to be a model of harmony between Sunni and Shiite Muslims, two groups that have been in conflict for centuries.

When the ICCNC bought the building, Sayyah says, the high painted-glass windows were left as they were, along with the pews and pipe organ — but the group did change some of the decor. Painted on the stained-glass windows now are the names of God in Arabic, and prayers in Farsi. Because the mosque was founded by Iranian immigrants, Persian rugs cover the wooden floors and Persian art adorns the walls.

And the smells are different, too, with the former Masonic dining hall now serving things like saffron rice and lamb kabobs.

The center hosts plays, open mic nights, painting and ceramics classes. Artistic expression is a focus here for a reason, says mosque leader Ali Sheikhulislami: It fills an important gap in the current conversations about Islam.

"I think one missing thing ... right now, today, is beauty — really paying attention to the beauty of Islam, and its rich history," he says.

That's part of the reason the ICCNC doesn't sound like your average mosque, either. Many mosques preach against even listening to music, let alone playing it on the premises. But here, in a huge auditorium filled with dozens of people, a Moroccan singer on stage sings the praises of the Prophet Muhammad, playing a stringed instrument called an oud. Next to him, a man plays a North African drum called the dumbek.

The unique thing about the American experience is, we are able to come to this country and practice the religion the way we want to, and to do it in a way that we're tolerant of each other.

The people here are white, black, Asian — some in embroidered green Sufi robes, others in black Shiite turbans or flowing white Arab jalabeyas. Some women cover their hair, some don't. Ask anyone who's been to a mosque, and they'll tell you this scene is definitely not a common one — which is precisely why many people feel comfortable here.

"It's a unique experience," says Ali Saadeghi, who's at the mosque when I visit. "If you go to a traditional Muslim place, that's not something that you're gonna get. It's more fun, and it's a good place for my kid and my wife to enjoy."

Sure, it was founded by Shia Iranians, but everyone is welcome here, says Ahmed Sheikhulislami, one of the founders. He explains that it's like a multidenominational church, where Presbyterians, Baptists and Lutherans hold services together. In the Muslim context, he says, this is a place for finding common ground between Shiitess and Sunnis — two groups often in the headlines because of violence in Iraq or, more recently, in Yemen.

Yaseen Ali Jones, who drove 86 miles from Sacramento to get to the mosque, says it's the first place where he's gotten to interact with Shiites and Sunnis together in the same space.

And Salman Mashayekh, an engineer from Santa Clara, says he wonders what the Prophet Muhammad would say about the current Sunni-Shiite divide.

"To me, it's nonsense, Shia and Sunni people fighting each other and killing each other. That's just not something the Prophet would not have wanted," he says. "We need to work together and sit with each other and listen each other out, and just have our own beliefs and not fight over anything."

The ICCNC's Ahmed Sheikhulislami says that being in the U.S, far away from the violence, gives room for that kind of dialogue.

"The unique thing about the American experience is ... we are able to come to this country and practice the religion the way we want to, and to do it in a way that we're tolerant of each other," he says.

Tolerance means having dialogue across the divide, even friendship and warmth. But what happens when Sunnis and Shiites are part of the same family? Ask 35-year-old Oakland educator Imrul Mazid. He is Shiite, having converted in his 20s; his parents are Sunni. He says he gets along fine with his parents, but not all conversations are comfortable. The main disagreement between the sects is a big one: who should've succeeded the Prophet Muhammad.

"Among my Sunni peers or family friends, I might not be that open about it. There's a long history of persecution against Shias, and you gotta be smart!" he says, laughing.

But Mazid says there's plenty they do agree on, and it's frustrating others can't see past the ideas that divide. He's especially tired of people nitpicking differences in the small things, like how to stand during prayer.

"It doesn't matter," he says. "It's about the message itself."

Mazid says that's why he likes this center. These issues aren't fought over here. Ali Sheikhulislami, the mosque leader, says that's the point of this place, to break down those walls. And, he says, being far from the Middle East gives room for that.

Mazid is part of a growing number of mixed Sunni-Shiite families in the U.S. --so many, there's even a name for them, Ahmed Sheikhulislami explains.

"We were talking to a friend, and he said, 'My mother is Sunni and my father is Shia, so ... we call ourselves sushi!' " Sheikhulislami recalls.

"We like that! ... We are one; these things should not divide us. We are all humans. We're all sushi."