Accessibility links
The Deep, Dark Secret Of R.L. Stine: 'I Never Planned To Be Scary' After more than 20 years of frights, Stine's Goosebumps series is finally getting a big-screen adaptation, starring Jack Black. For Stine and Black, the key to the nightmare is in keeping things fun. 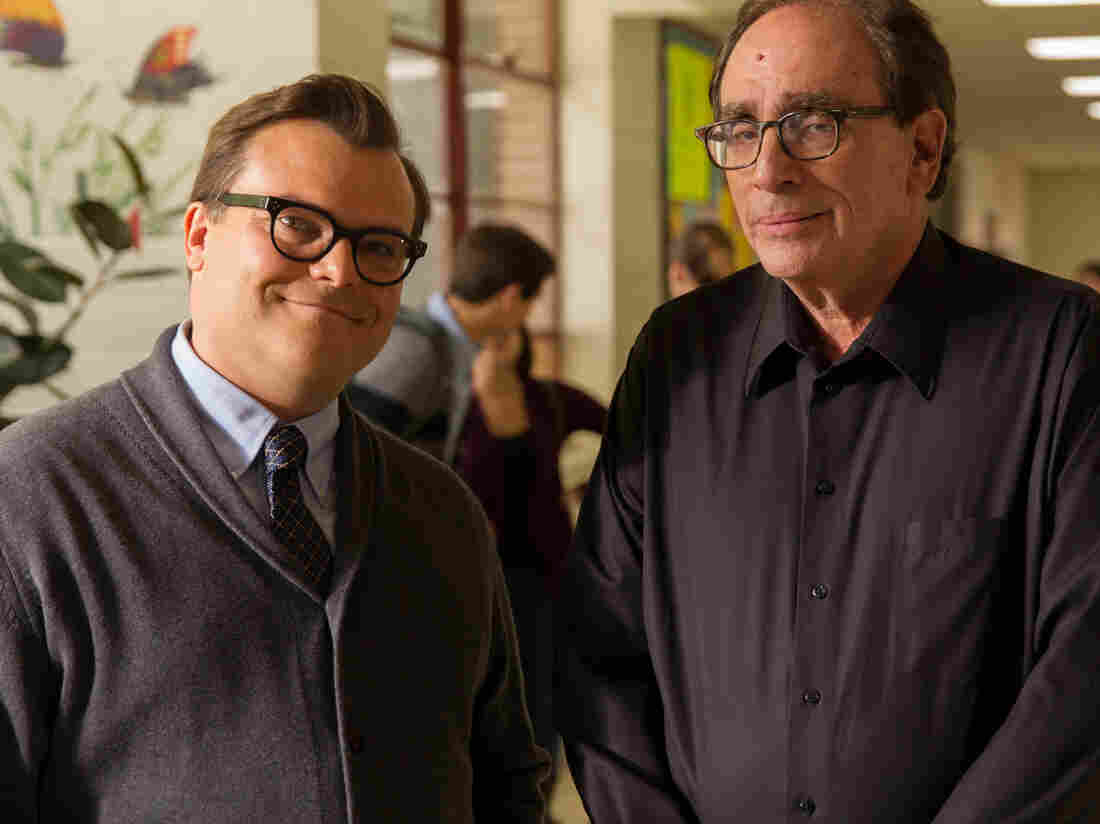 Jack Black and R.L. Stine on the set of the film adaptation of Goosebumps. Hopper Stone, SMPSP/Courtesy of Columbia Pictures hide caption 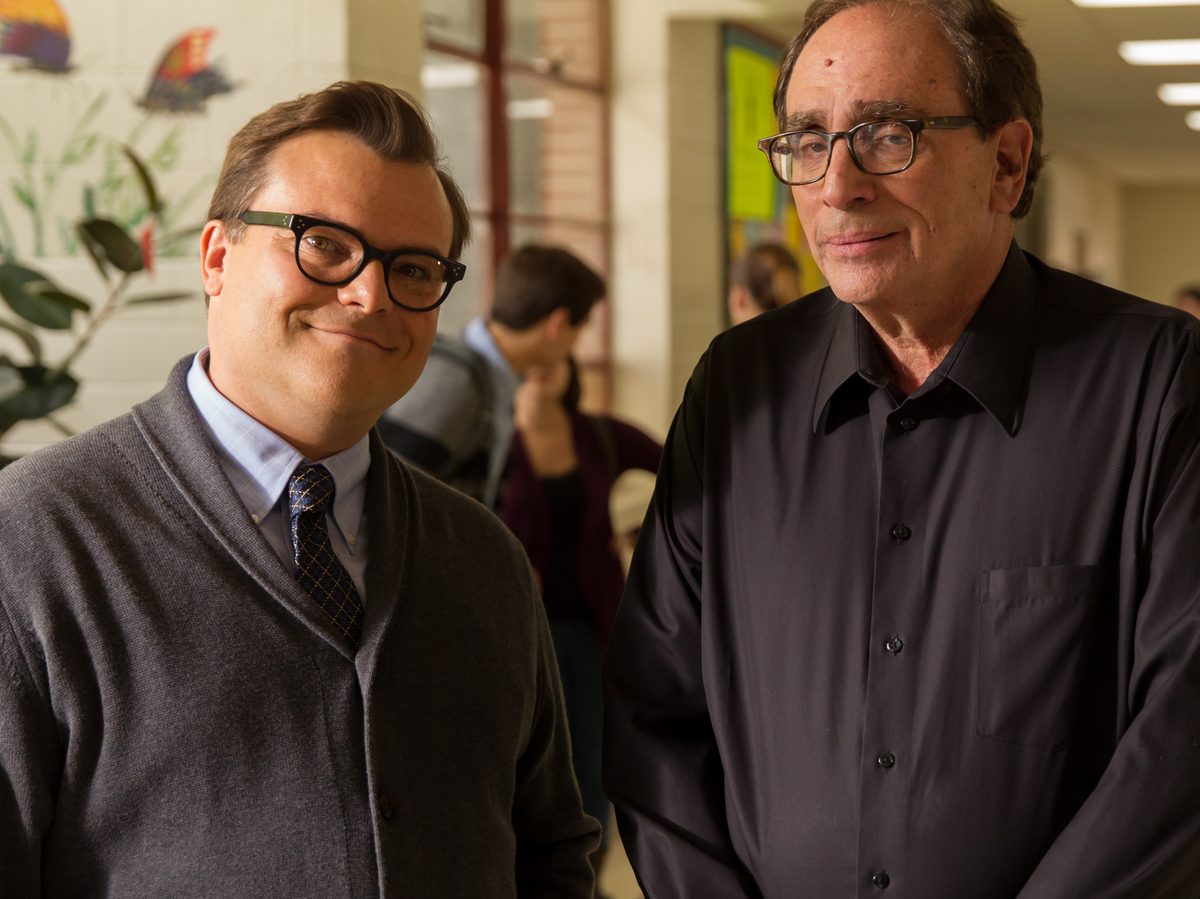 Jack Black and R.L. Stine on the set of the film adaptation of Goosebumps.

If you are — or have ever had or been — a kid, if you like to read and you like to creep yourself out, then you probably know the name R.L. Stine. The prolific author has written hundreds of horror stories for kids, none more popular than his long-running series of frightfests, Goosebumps.

The series has sported iconic neon cover art and memorable titles — like The Beast from the East and The Abominable Snowman of Pasadena. Over 400 million copies of Stine's books are in print. Still, in the more than two decades since Goosebumps got its start, there's at least one thing the series hasn't done: made the leap from the page to the big screen.

Until now: Goosebumps has been adapted into a feature film, starring dozens of monsters and Jack Black as the man himself, R.L. Stine — or, at least, a version of Stine.

"He's not a sinister dude at all," Black says of Stine, in an interview with NPR's Michel Martin. "He's a really sweet, fun guy to hang out, with a really great sense of humor."

So Black took a few liberties, drawing a dark side out of his fictional Stine that he couldn't find in the real one.

In Bringing 'Goosebumps' To The Big Screen, Jack Black Gets His Creepy On

In Bringing 'Goosebumps' To The Big Screen, Jack Black Gets His Creepy On

Attack Of The Spooky Script! R.L. Stine, In Life And On The Screen

Attack Of The Spooky Script! R.L. Stine, In Life And On The Screen

"It's always fun to play the bad guy," Black tells Martin. "The villain is always sort of the most interesting part of the movie. Case in point: Darth Vader! What good is Star Wars without Darth Vader? Hannibal Lecter? Can't take your eyes off him!"

As for Stine himself? Never mind the fact that he's not a horror — in a separate interview, he tells Martin that he never even meant to become a horror author. He did get an early start writing, though.

"I started when I was 9. I don't know, I was this weird kid. I found a typewriter, I dragged it into my room and I would just stay in my room, typing — typing out funny stories and little comic books," Stine says. "You know, I always wanted to be funny. I never planned to be scary."

Stine says he wrote in humor magazines all through college, later running a humor magazine of his own, called Bananas, for the publisher Scholastic for 10 years.

"That was like my life's dream, and when it ended, I thought I'd just coast the rest of my career," Stine says. "I had no idea what was in store for me."

It wasn't until an editor asked him to write a horror novel for teenagers — she even gave him the title, Blind Date — that he actually got into scary stories. "I didn't know what she was talking about," he says, but he wrote it anyway — and it sold well.

"And I thought, forget the funny stuff, the kids want to be scared!" Stine says. "So I've been scary ever since."

But not too scary. Stine says he's written 125 Goosebumps books, and in each of them he tries to maintain a balance between the scary and the funny.

"You know, they're not just horror novels," he tells Martin. "I don't really want to terrify kids. Whenever I have something that I think is kind of intense, I throw in something funny to lighten it up."

And that's advice he relayed to Jack Black, as well. When they were making the film, Black says Stine recommended, "Don't be too scary. You can thrill, but don't traumatize. Remember, there's a lot of kids in the audience for my books, so let's lean into the comedy and have some fun with it." 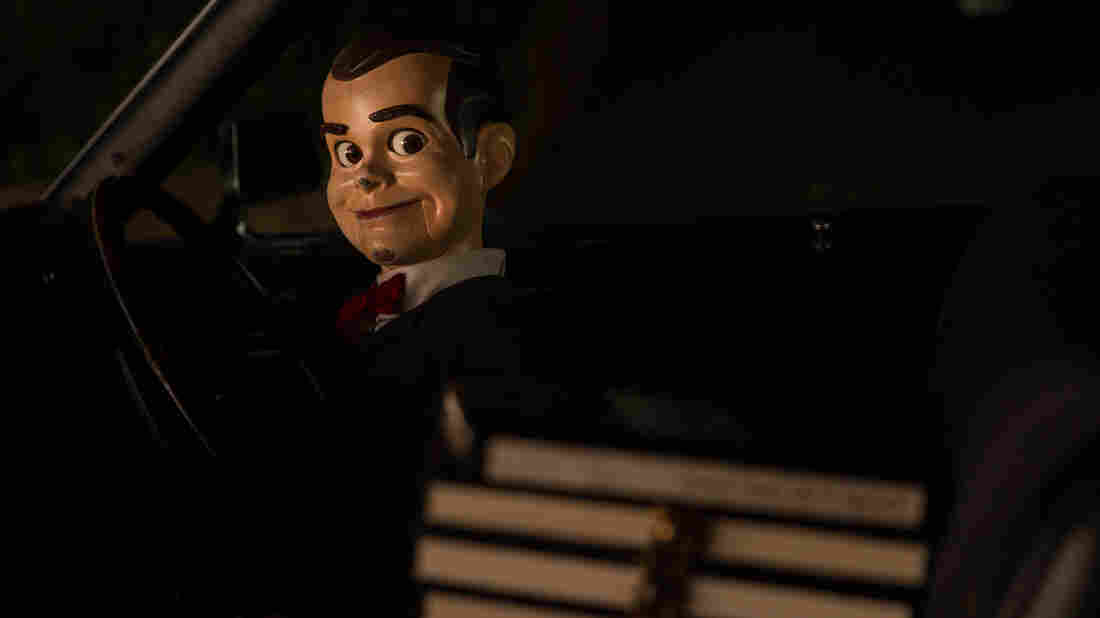 "There's over 40 monsters in the movie, but I think my favorite has got to be Slappy, the ventriloquist dummy," Jack Black says. "He's just a little doll. But he has that cruel intention behind the eyes." Hopper Stone, SMPSP/Courtesy of Columbia Pictures hide caption 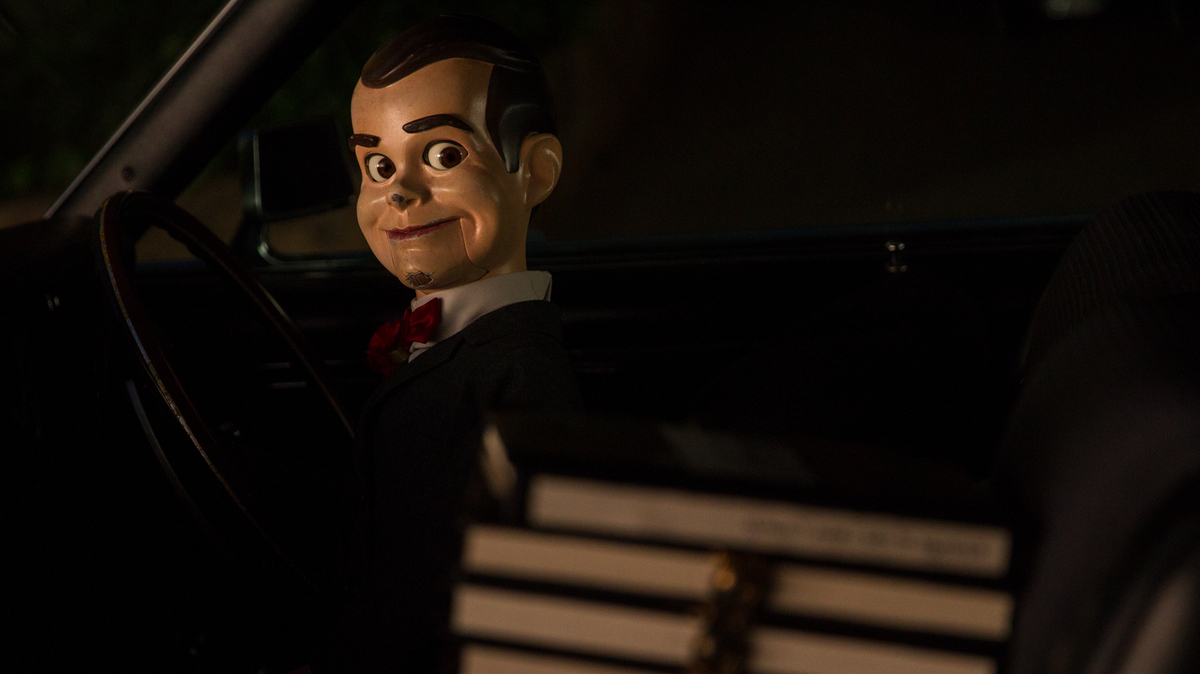 "There's over 40 monsters in the movie, but I think my favorite has got to be Slappy, the ventriloquist dummy," Jack Black says. "He's just a little doll. But he has that cruel intention behind the eyes."

That sense of fun wasn't just a guideline for Black in making the film. It remains an inspiration for Stine, even now, as he comes up with ideas for new books.

"I don't ever try to think of ideas. I always just think of titles. And then the title leads me to the story," Stine says. "One day I was walking my dog in the park here in New York, and these words flashed into my mind: 'Little Shop of Hamsters.' Where? Why? I don't know where it came from."

But it got him thinking: "'What could be scary about hamsters? Could maybe there be a thousand of them? Or maybe there'd be a giant hamster?" he says. (Little Shop of Hamsters did actually become a Goosebumps book, by the way.)

He's done so many stories by now that he says that it's getting difficult to come up with new books — "It's always a miracle to me when suddenly I have an idea for a new one" — but he has no plans to stop anytime soon.

"I keep getting new generations to scare. But I really don't understand why it's lasted 23 years. I'm so thrilled by it," he says.

"I always tell kids," Stine says, "I always tell them there's no way to plan your life. You never know where you're going to land. There are always going to be all kinds of surprises."

And a few frights too, of course.