Accessibility links
How Do You Find Plutonium? Go To Nuclear Inspector School A nuclear agreement with Iran hinges on the work of nuclear inspectors. Here's a close-up look at how they train to do their job. 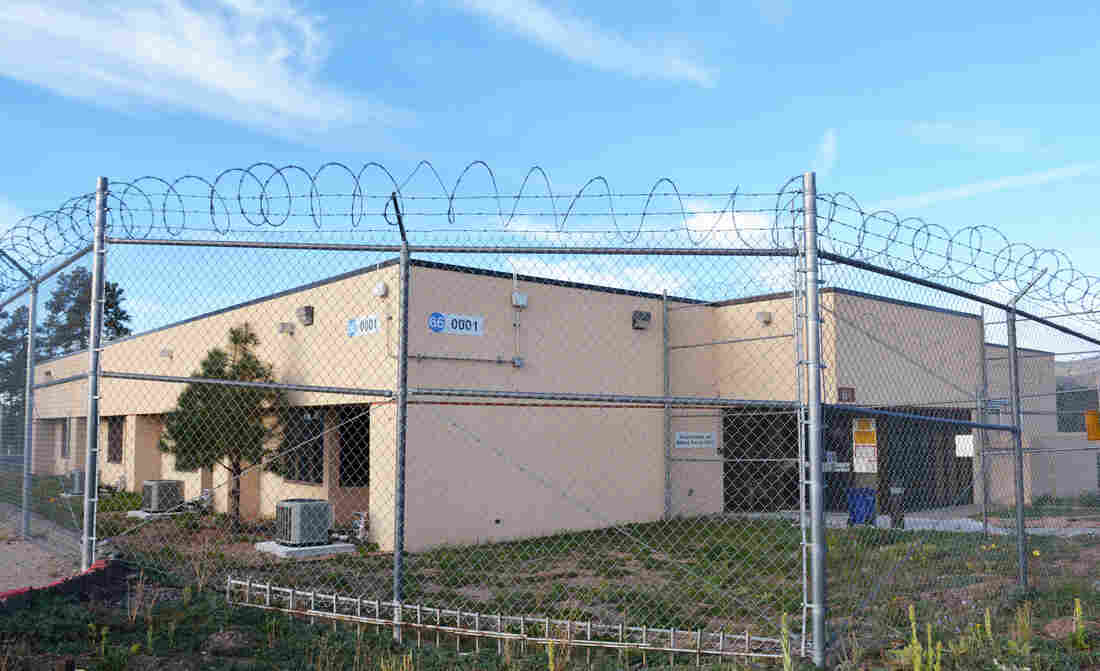 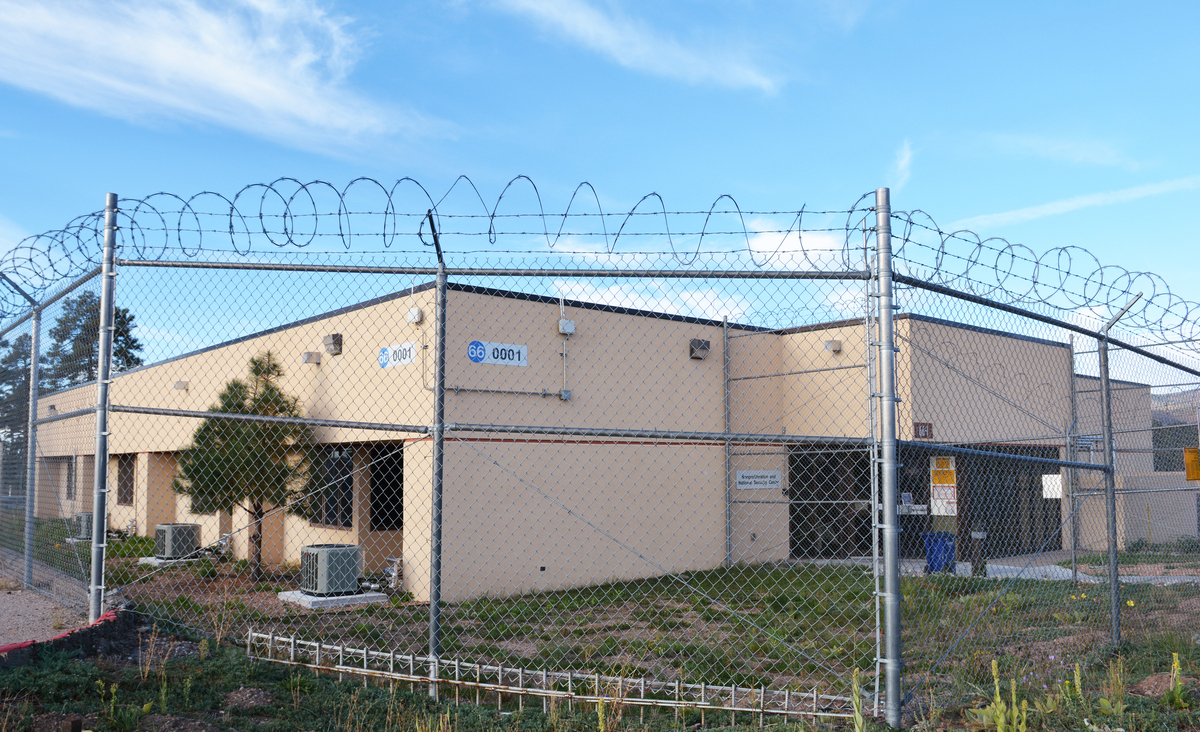 Inside a nondescript building at Los Alamos National Laboratory known as TA-66, nuclear weapons inspectors are carefully trained in the detection of plutonium.

No names. No pictures. No direct conversation.

And don't touch the plutonium.

Those were the ground rules before NPR was allowed a rare opportunity to see nuclear inspectors learning their craft. The inspectors came from the International Atomic Energy Agency, the world's nuclear watchdog.

This week, the agency will be looking on as Iran begins to scale back its nuclear program. Under the terms of a multinational agreement, Iran is to dramatically cut its uranium stockpile, mothball much of its nuclear equipment and restrict the rest to peaceful use. In exchange, the U.S. and other nations are to lift economic sanctions.

The IAEA's role in the deal is somewhere between that of a football referee and a tax accountant. Its inspectors will crisscross the country visiting labs, reactors and even uranium mines. They will meticulously catalog equipment and material to make sure it's all accounted for. If something seems off, they are the ones who will cry foul.

Plutonium and uranium are used in ordinary nuclear power reactors all around the world. But when they are properly purified and enriched, they can also be used to make nuclear weapons.

Inspectors must learn everything about plutonium — the civilian kind, which is used in some power reactors, and also the kind used in nuclear weapons. Los Alamos has plenty of both.

Behind barbed wire and security checkpoints, the eight inspectors are working in an anonymous-looking building known as "Technical Area 66." They're an unassuming bunch, dressed in ordinary street clothes. Their accents suggest they come from all over the world.

Peter Santi, who is heading the training for Los Alamos, takes me across the classroom to pick up some pure plutonium oxide. It's sealed in a metal container about the size of a paint can, with a makeshift handle made of tape to make it easier to carry. (Dropping the plutonium "makes a loud noise and it scares everybody," Santi jokes.)

We put the can of plutonium into another container about the size of an oil drum. It's designed to catch radioactive particles flying out as the plutonium decays. 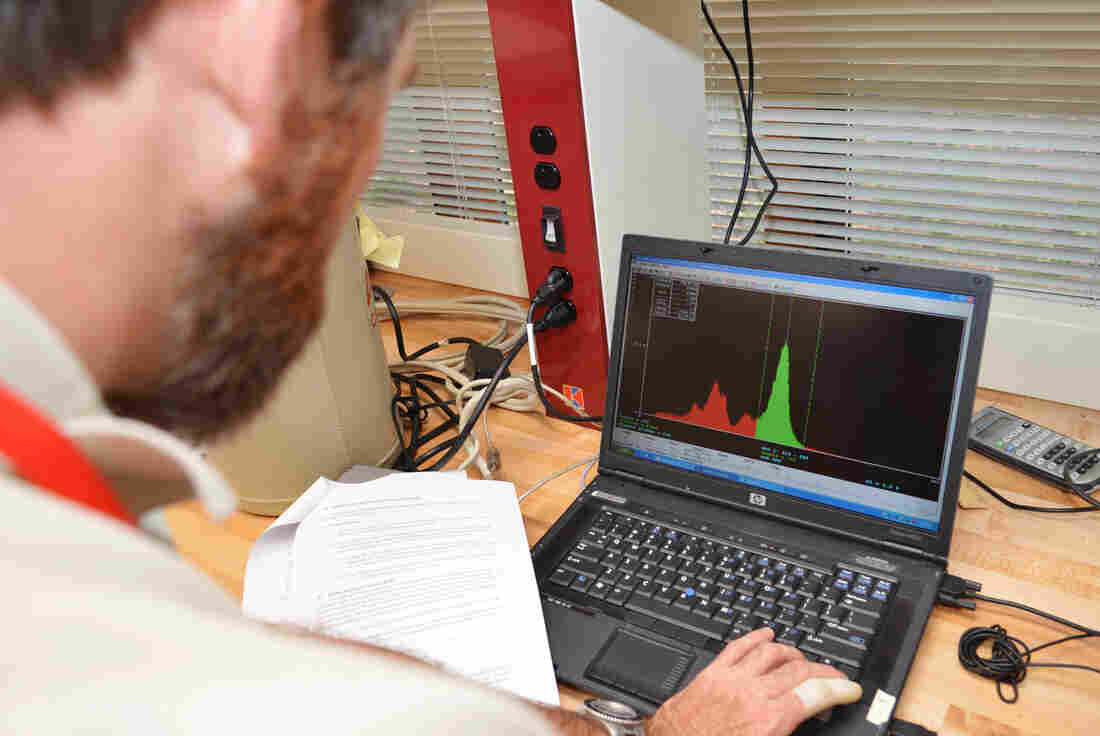 Each kind of nuclear material has a unique radioactive fingerprint. Inspectors use that signature to identify and quantify the material. Courtesy of Los Alamos National Laboratory hide caption 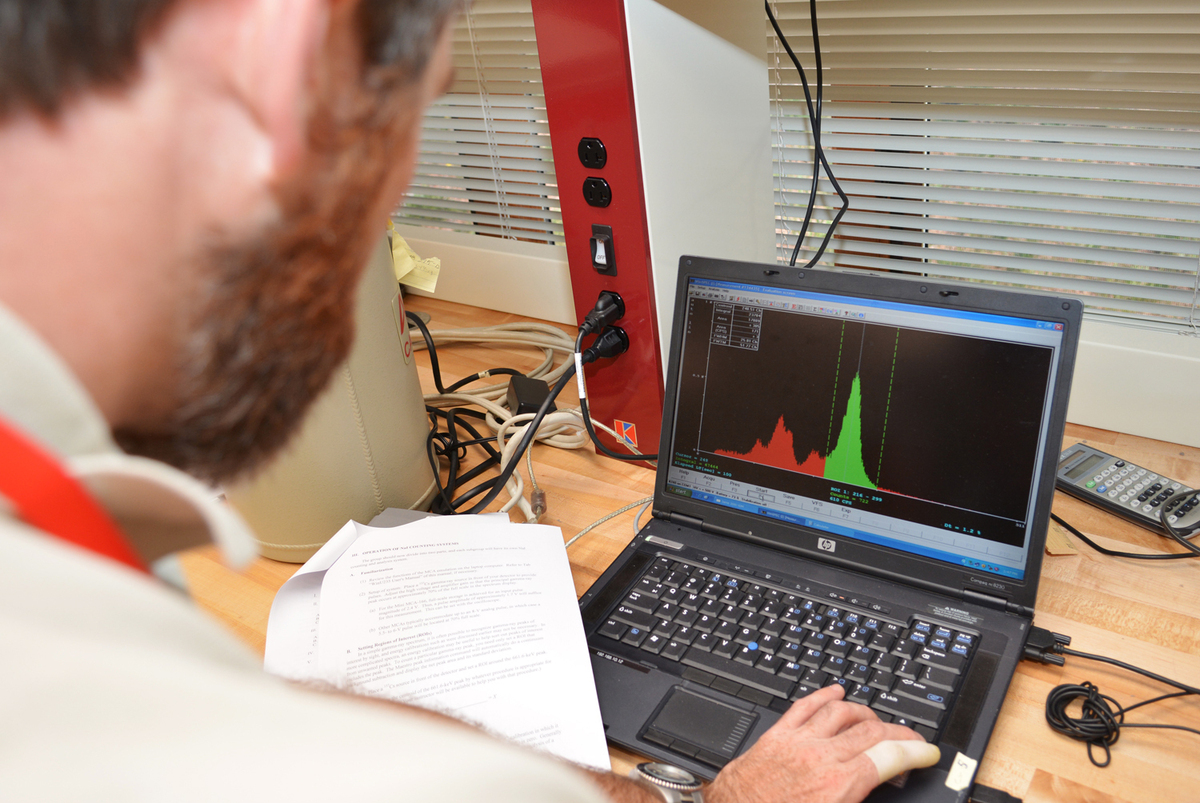 Each kind of nuclear material has a unique radioactive fingerprint. Inspectors use that signature to identify and quantify the material.

"Nuclear material, when it decays, produces very unique signatures," Santi explains. The radiation acts as a fingerprint for the substance, and it's virtually impossible to mimic.

Inspectors use the radioactive fingerprint in two ways. First, they check it to verify the kind of material they are dealing with. Then they measure it to figure out how much material is there. Santi can nail down the amount of plutonium in this can to within a gram — a fraction of a percent of the total 606-gram mass.

In Iran, inspectors will work primarily with uranium, but they will bring the same dogged precision to their measurements. In addition to measuring nuclear materials, they will take environmental samples, install cameras and conduct visual inspections, among other things.

The IAEA actually does this work elsewhere, too. "We are inspecting all different types of facilities all over the world," says David Lacey, a training officer with the IAEA and a former inspector. The agency visits civilian reactors, fuel plants and plutonium handling facilities everywhere from Brazil to Japan to the U.S. Inspectors go in, make measurements and then compare them to the official inventory to make sure everything is accounted for. It's a challenging job even in the best of times.

The Iran deal carries its own complications. For one, Iran has not always been forthright with the IAEA, says Olli Heinonen, a former nuclear inspector now at Harvard University. Since the early 2000s, Iran has failed to disclose multiple facilities associated with its program.

And then there are the thorny global politics around the agreement. In the U.S. "there are people who don't trust the IAEA," says Jeffrey Lewis, an expert in nonproliferation at the Middlebury Institute of International Studies at Monterey. In Iran, "They think the IAEA is biased against them," Lewis says.

Both sides may try to pressure the agency, or even individual inspectors.

Despite the challenges, both Lewis and Heinonen agree the IAEA is a capable overseer of the deal. 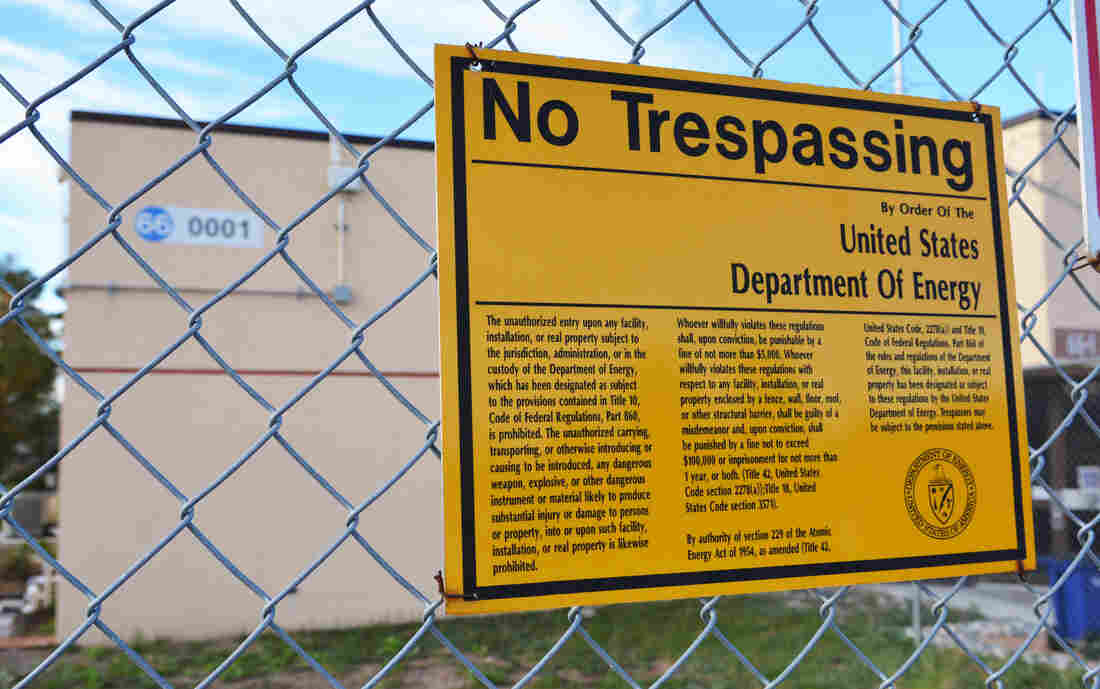 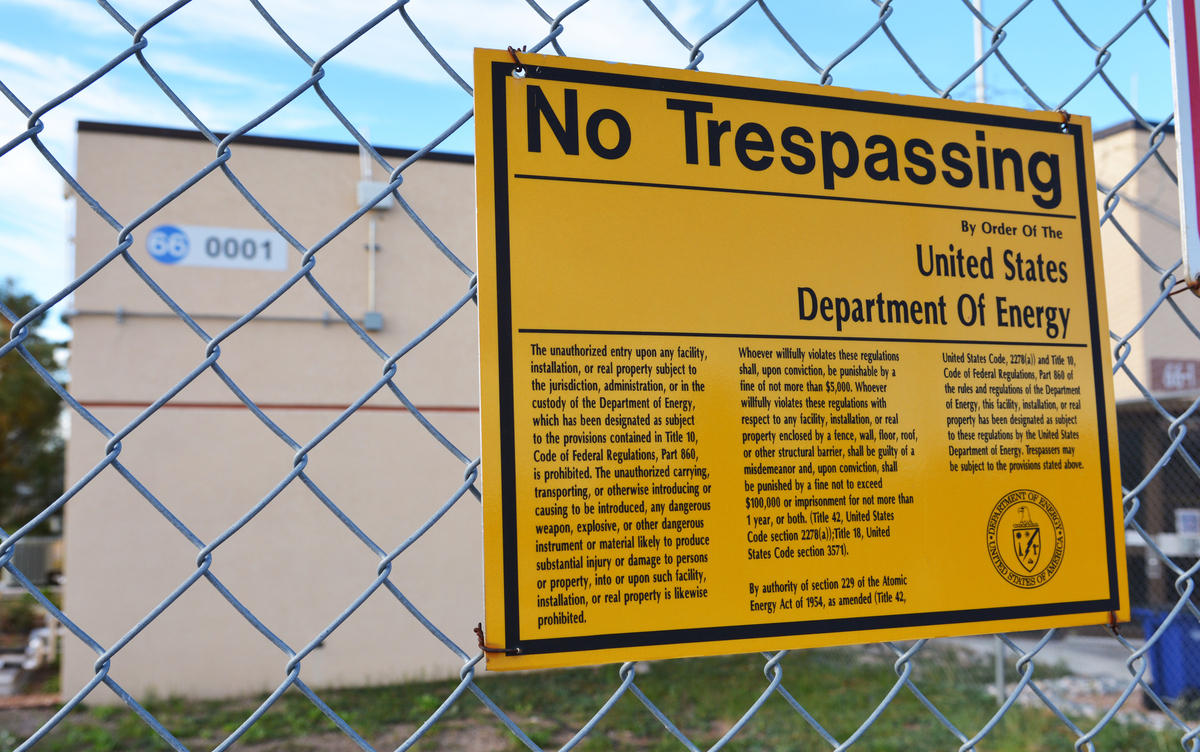 Los Alamos National Laboratory is home to weapons-grade uranium and plutonium, making it an ideal place to train the inspectors.

"They have a good track record," says Lewis, who notes that the agency has caught deception in Iran in the past, as well as illicit activity in places like North Korea and South Africa.

The IAEA has also missed some things in Iran in the past, Heinonen says. But the agency inspectors have shone a light on many hidden aspects of that nation's nuclear program, including possible work on nuclear weapons.

Heinonen says the greatest risk is that Iran has hidden entire facilities. But in the modern era, he believes, it would be hard to get the equipment, expertise and nuclear material together without anyone noticing.

"It's very difficult to build a nuclear program in isolation," he says.

There's no way to know whether the inspectors being trained on the day I visit will be sent to Iran. But what is clear is that the IAEA wants to be sure all of its inspectors are ready for anything.

For their final exam, the inspectors have been given a nuclear inventory from a fictional facility. Their task is to verify 12 unmarked items and to see how much plutonium is inside each one. But in this exercise, just as can happen in the real world, not all is what it seems.

"Several of the items, we've lost the declaration for," says Santi, "so they're completely unknown to the inspectors."

And have the instructors done anything else in the exercise to try to trip up the members of the class?

He won't say what tricks he's using to try to fool inspectors, but whatever it is, they will have to figure it out. And the IAEA's trainer David Lacey is confident they will.

"They'll be fine," Lacey says. "They've had good teaching over the last two weeks. I can see now, looking around, that they're perfectly capable."