Accessibility links
Don't Take 'Submission' Lying Down Michel Houellebecq's dark satire Submission caused a furore in his native France with its depiction of an Islamist takeover. But critic Heller McAlpin calls it "too distasteful to be amusing." 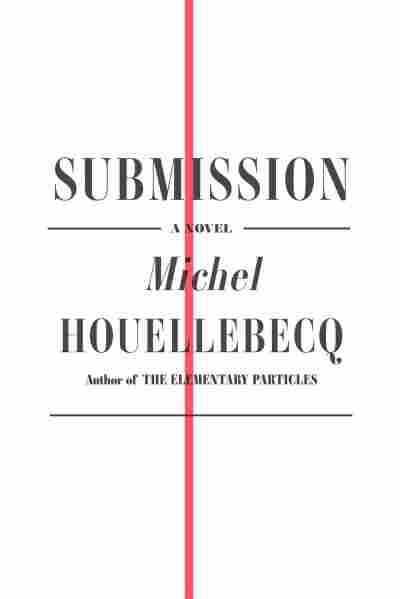 A recent column in the New York Times Book Review posed the question, "Whatever Happened to the Novel of Ideas?" Et voilà: Few will disagree that Michel Houellebecq's Submission, smoothly translated from the French by Paris Review editor Lorin Stein, is a novel of ideas — even though most of them are deeply discomfiting if not downright offensive. Houellebecq, a surprisingly popular provocateur of French literature, has written a dystopia set in 2022, in which a shrewdly charismatic, moderate Muslim named Mohammed Ben Abbes leads his party, the Muslim Brotherhood, to power in France by forming a coalition with Socialists.

In short order, this new government slashes unemployment and the deficit by forcing women out of the workplace and ending mandatory education at age 12. Higher education is privatized, largely funded by Saudi petrodollars, and non-Muslims are forbidden to teach. Jews are encouraged to emigrate to Israel. Population rebounds as women — all veiled — stay at home with their polygamist husbands; these patriarchal families receive generous subsidies. In addition, French global influence surges as Muslims win elections in other European countries, and Morocco, Tunisia and Turkey join the EU to form a growing force against the petro-world.

Houellebecq's last novel, The Map and the Territory, a satire of art and its representation of reality in which a character named Michel Houellebecq is murdered, won the Prix Goncourt in 2010. Submission, his sixth novel, gained instant notoriety — and sales — when a caricature of Houellebecq appeared on the cover of the satirical newspaper Charlie Hebdo on Jan. 7, 2015 — the same day the paper's Paris offices were attacked by two Islamic gunmen, leaving 12 people dead. The author has since been under police protection.

Few will disagree that Michel Houellebecq's 'Submission' ... is a novel of ideas — even though most of them are deeply discomfiting if not downright offensive.

Billed as a satirical, mordantly funny moral fable, Submission is provocative, all right, but too distasteful to be amusing. To the degree that it works at all, it does so by engaging us in intense intellectual tête-à-têtes about political movements, nationalism, religion, Nietzsche and Roman emperors — and then spinning scenarios that play on our fears. But if the insidious, passively accepted anti-Semitism and misogyny don't turn you off, Houellebecq's gratuitously graphic, loveless sex scenes will.

Our guide to this unsettling if unlikely scenario is François, a misanthropic, misogynist professor at the Sorbonne whose only interest in teaching is finding students for his serial affairs. He divides women into two categories — "good little cooks" or good little playmates. (This is a guy who makes Dostoyevsky's nameless Underground Man seem almost appealing by comparison.)

François' single area of expertise is the 19th century French author J.K. Huysmans. American readers unfamiliar with this Decadent author will learn a good deal about him, including Huysmans' growing self-disgust with his dissipated ways, which propelled him to find God at age 44. Not coincidentally, François turns 44 on the day his hot young girlfriend Miryam announces that she is moving to Israel with her frightened parents. And, in one of many parallels with Huysmans, it's at 44 that — fed up with the vapid loneliness of his life — François must decide whether to convert to Islam. The inducements are strong: His job will be reinstated at the newly formed Islamic University of Paris-Sorbonne, and he will be granted up to three wives, with a commensurately generous salary to support them.

Houellebecq's target, to be clear, isn't Islam. Instead, it's the exhausted, effete, myopic European chattering classes — intellectuals, politicians and journalists.

Houellebecq's target, to be clear, isn't Islam. Instead, it's the exhausted, effete, myopic European chattering classes — intellectuals, politicians and journalists. Throughout, Houellebecq — like his unappealing narrator — maintains a creepy detachment and complacency, which casts his social criticism in ambiguous light. He writes, apparently approvingly: "For the French, an intellectual didn't have to be responsible."

It will be interesting to see how this plays in the U.S., where the novel's political concerns with France's two-party system and its role in the EU are likely to seem as alien as its intellectual and historical focus on Huysmans, Nietzsche and Roman emperors. I'm hoping that women, at least, won't take this insulting scenario lying down.