Accessibility links
In D.C. And China, Two Approaches To A Streetcar Unconstrained By Wires D.C. has struggled to roll out a streetcar line that uses both overheard wires and off-wire, battery power. In southern China, though, a new supercapacitor-powered tramline is already up and running.

New streetcars glide along tracks set into a grassy strip along the Pearl River in southern Guangzhou city. The first tramline covers five miles in the city's up-and-coming Haizhu district.

The streetcars cover the line's 11 stops in 20 minutes. The stations are open, with no turnstiles or barriers. Pedestrians cross the tracks at crosswalks with traffic lights.

The cars themselves look sleek and modern, but what's most surprising is that you can't see where their power is coming from — unless you know where to look.

At one station, Fan Xiaoyun, assistant chief engineer with the Guangzhou Metro, points to some thin strips of metal up above the streetcars.

"You can see that as the train enters the station, it just lightly touches those contact strips, and in 20 seconds it's fully charged and ready to go to the next station," he says.

Instead of batteries, the trams have Chinese-made supercapacitors mounted on their roofs. They're charged in the time that it takes passengers to get on and off. Then the streetcars can move at nearly 45 mph.

In the future, as the supercapacitor technology improves, Fan Xiaoyun says, the trams will be able to go farther and faster on a single charge.

Fan says that not having to lay cables or electrified rails between stations saves money.

And they're cheap to run. Fan says that a streetcar carrying more than 300 people can go a kilometer, or six-tenths of a mile, for the equivalent of 44 cents.

China still gets most of its electricity from burning coal, but it's gradually increasing the amount it gets from non-fossil fuels.

"Right now, you can see that there are no tall buildings here," Fan observes. "But this area is now a focus of development, and in about three years, the buildings will be even more dense here than across the river."

Fan points out that in large cities like Guangzhou, streetcars don't replace subways; they supplement them. They're meant for the last leg of the journey, ideally to take you door to door.

"It's for short to medium distances," he explains. "The tram stations are about 700 meters apart, whereas subway stops are a kilometer or more apart.

The Guangzhou streetcars are decorated with several themes. One has clowns and circus animals. There's a book-themed tram, with bookshelves painted on the walls and maps on the floor.

During the trial period, passengers can ride the streetcars all day for a ticket costing about 31 cents. The passengers I met on board were a mix of locals and tourists, most of whom came to ride the trams out of curiosity.

Passenger Xu Xuejun says taking the streetcars sure beats sitting in traffic, or walking through clouds of car exhaust downtown.

"Of course I would like to see these streetcars in my neighborhood too," she says. "But the city center is too crowded, and I'm afraid it's just not feasible."

Fan Xiaoyun says the city is exploring the feasibility of extending tramlines into downtown areas.

For now, he's got his hands full hosting delegations from cities around China and the world, lining up to learn more about his city's supercapacitor-powered streetcars.

On H Street in Washington, D.C., new restaurants and bars occupy brightly painted brick rowhouses from the turn of last century. Also new here is a streetcar line, and, about 15 feet overhead, a loose web of wires providing electricity to run the cars.

Washington has been stumbling its way toward a streetcar revival on H Street for years. This line isn't open to the public yet, so many people are more worried about the hundreds of millions of dollars already spent than they are about the aesthetics of the wires.

But wires were very important to Congress back in 1888. Lawmakers saw them as a threat to the beauty of the nation's capital, so they passed a law prohibiting overhead wires for "telegraph, telephone, electric lighting" or for anything else.

That law is a point of contention to this day. When the District's City Council moved ahead with streetcars in 2010, it authorized overhead wires for the new line on H Street. But the plan to expand the line across town would need a wireless solution.

Neither the District's Department of Transportation nor the National Capitol Planning Commission, which has some say in the matter, would discuss the subject on record.

But, Washington, D.C., once had an extensive system of streetcars that didn't need wires. It lasted decades, until 1962.

The power for those streetcars came from underground, explains Ken Rucker, director of the National Capitol Trolley Museum in Colesville, Md.

The streetcars had a stick known as a plow, which dropped through a narrow slot in the street, where it picked up electricity from an underground rail.

Besides the aesthetics, overhead wires cost money to install and maintain, and they can fall in storms or get in the way of fire trucks.

But the underground system was also problematic. For one thing, Rucker says, automobile chains could fall into the slots, and a plow could disable the streetcar for some time. Restoring that system would be colossally expensive.

Wireless streetcar systems are now showing up in other U.S. cities. Dallas has opened a new line that runs on lithium ion batteries. Detroit has ordered new cars from the same company, Pennsylvania's Brookville Equipment Corp. Seattle is waiting for delivery from a Czech firm, Inekon, for an off-wire line of its own. 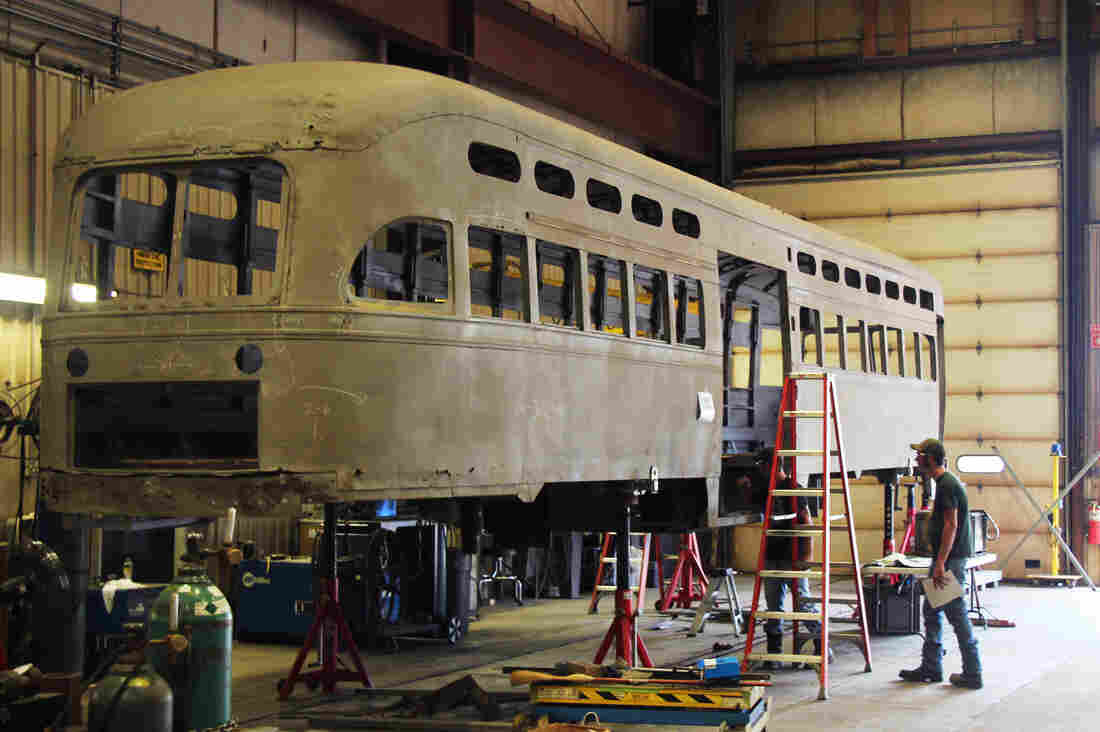 Besides making the "Liberty Modern" Streetcar, which is Brookville Equipment Corp.'s hybrid streetcar that operates on-wire and off, Brookville also restores old streetcars for cities including New Orleans and San Francisco at its plant in Brookville, Pa. Franklyn Cater/NPR hide caption

Brookville, the only American manufacturer to produce an off-wire streetcar, manufactures rail equipment and restores old streetcars from cities like New Orleans and San Francisco. Brookville also makes a battery-powered streetcar called the Liberty Modern, which is now in service in Dallas.

The Liberty is a hybrid — company president Marion Van Fosson calls it "the Prius of the modern streetcar market." It runs on-wire for some sections of track, charging its lithium ion batteries. Then when the wires end, the car's connecting pantograph folds down and it runs on battery power.

The Streetcar Of The Future

Battery-powered streetcars have been pushed by the automotive market. Brookville won't say where it gets its batteries — the competition is listening. But Brookville Vice President Joel McNeil says it's a domestic supplier making batteries for hybrid vehicles.

Van Fosson says Brookville is ready to start offering streetcars with faster-charging systems, such as supercapacitors like those in Guangzhou.

"We're probably not going to drive the research and development for energy storage, but we're definitely going to leverage those advancements that are brought on by other industries," he says.

McNeil says the marketplace is headed toward completely off-wire systems — perhaps in the next five years.

"It's definitely moving in that direction," he says. "There are cities that they just say, 'We don't want any overhead wire.' "