Accessibility links
Something Is Happening On The Internet, And 'Jem' Is Not Really On It The live-action adaptation of Christy Marx's '80s cartoon staple wants desperately to appeal to teenagers who live online, but it has neither the energy nor the knowledge of the landscape to do it.

Something Is Happening On The Internet, And 'Jem' Is Not Really On It

Something Is Happening On The Internet, And 'Jem' Is Not Really On It 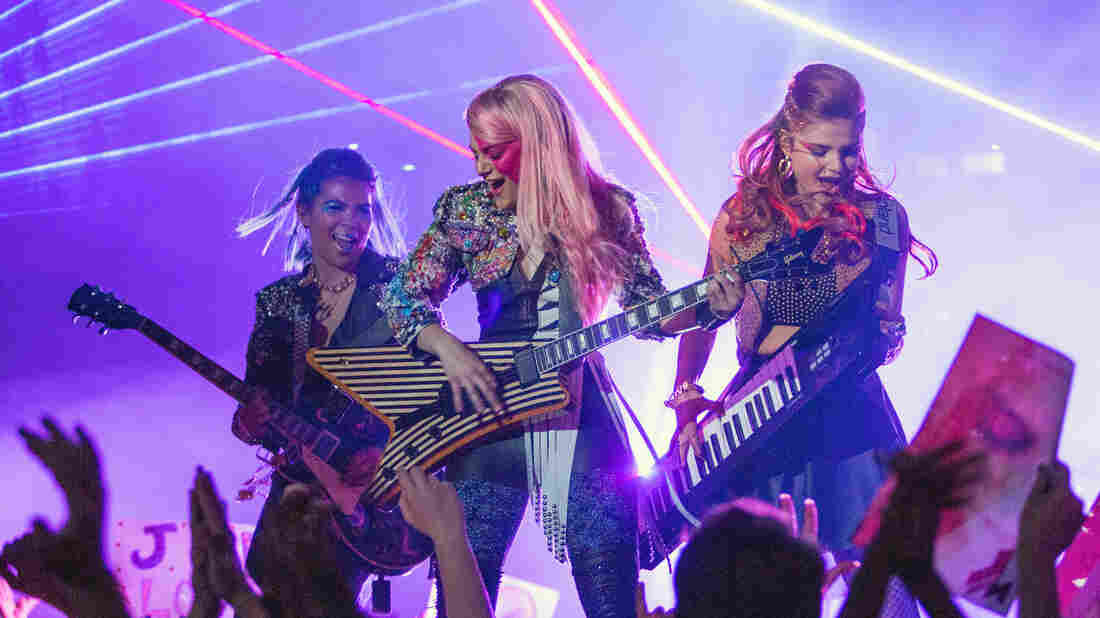 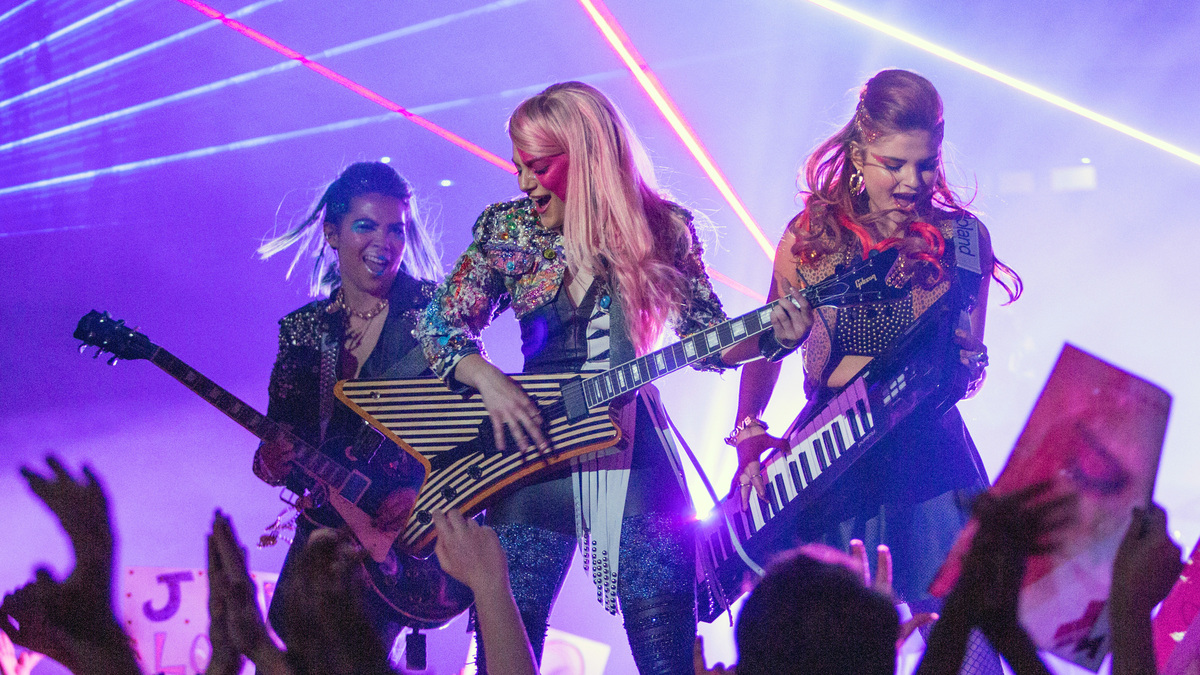 Aja (Hayley Kiyoko, from left), Jem (Aubrey Peeples) and Kimber (Stefanie Scott) in a scene from Jem and the Holograms.

"Something's happening on the Internet," yelps Kimber to her shy older sister Jerrica Benton, the instant pop sensation known as "Jem," in the live-action version of Christy Marx's mid-'80s cartoon staple Jem and the Holograms. Kimber is delighting over an acoustic video gone viral, but the line aptly describes the modus operandi of the filmmakers, who are desperate to tap into the preteen zeitgeist but haven't got a clue how to do it. From what they can gather, the Internet is a series of tubes, connected by hashtag-dealing vloggers who will surely love the movie if they feel validated by it. The film is a cynical marketing plan set to music, as if director John M. Chu and his (all-male) producers and writer came away from Josie and the Pussycats thinking Parker Posey's music-biz CEO was the hero.

That's not all Jem takes from Josie. Ryan Landels' script lifts the premise almost beat for beat — teen musician becomes overnight sensation, signs a Faustian deal with a slick-talking label executive (Juliette Lewis in the Posey role), and loses her bandmates in a bid for solo stardom. But the film loses the catchy soundtrack, the candy-colored production design, and the satire on a culture geared toward turning kids into consumerist zombies. Few critics gave Josie enough credit for cleverly subverting the teen-pop musical, but Jem preys so rapaciously on its target demographic that it holds the virtues of the earlier film in sharp relief. Jem and the Holograms is Mac and Me to Josie and the Pussycats' E.T.

Yet another in a regrettable trend of franchise-starting origin stories, Jem follows Jerrica/Jem, her Instagram/YouTube-crazy sister Kimber, and their foster sisters Aja (Hayley Kiyoko) and Shana (Aurora Perrineau) on the fast track to musical fame. After Jerrica records a heartfelt song in her room — hiding her face under a pink wig and her identity under the nom de rock Jem — Kimber secretly posts it online and it immediately attracts interest from Starlight Enterprises honcho Erica Raymond (Lewis). With Jerrica eager to make money to save her aunt and the quartet's adoptive mother (Molly Ringwald) from foreclosure, she gets coerced into Raymond's plan to make her a solo act.

That's plenty of intrigue for one 90-minute confection, but Jem and the Holograms is a full two hours and has much more tedious narrative business on the agenda. It would seem that Jerrica's late father, an inventor, bequeathed to her a hologram-projecting robot named Synergy who won't work until Jerrica finds three missing pieces, each hidden in a hard-to-access location. Her mission, should she choose to accept it, is to waste an hour of screen time following clues so her dad can appear like Obi-Wan Kenobi (or Will.I.Am). Synergy has a critical role in Marx's show — as does the rival band The Misfits, who are only teased for the wildly optimistic prospect of a sequel — but the bleeping robot does nothing that a simple letter couldn't do. It's just something to keep Jerrica and her friends busy.

Chu directed the Justin Bieber doc Never Say Never — Bieber management svengali Scooter Braun co-produces here, too — and made the second and third Step Up movies, and he attempts to find a choreography between Jem's music and the homemade sounds of YouTube artists. But the overall effect is to sell teenagers on the lie that they're creatively invested in this boondoggle — that they are "Jem" just as much as Jerrica is. In fact, Jem and the Holograms is so committed to the concept that it looks like an online video, washed out in a low-resolution gray that exposes its exceptionally modest $5 million budget.

Something will definitely happen on the Internet when the film hits theaters. Useful advice to the filmmakers: Don't read the comments.

A previous version of this review incorrectly said Erica Raymond is portrayed by Parker Posey in the movie. The character is actually played by Juliette Lewis.