Accessibility links
Why Is It So Hard To Save? U.K. Shows It Doesn't Have To Be Millions of workers in the U.K. who thought they couldn't afford it are saving thanks to a law that automatically enrolls them in a retirement plan. It tricks their brains into doing the right thing. 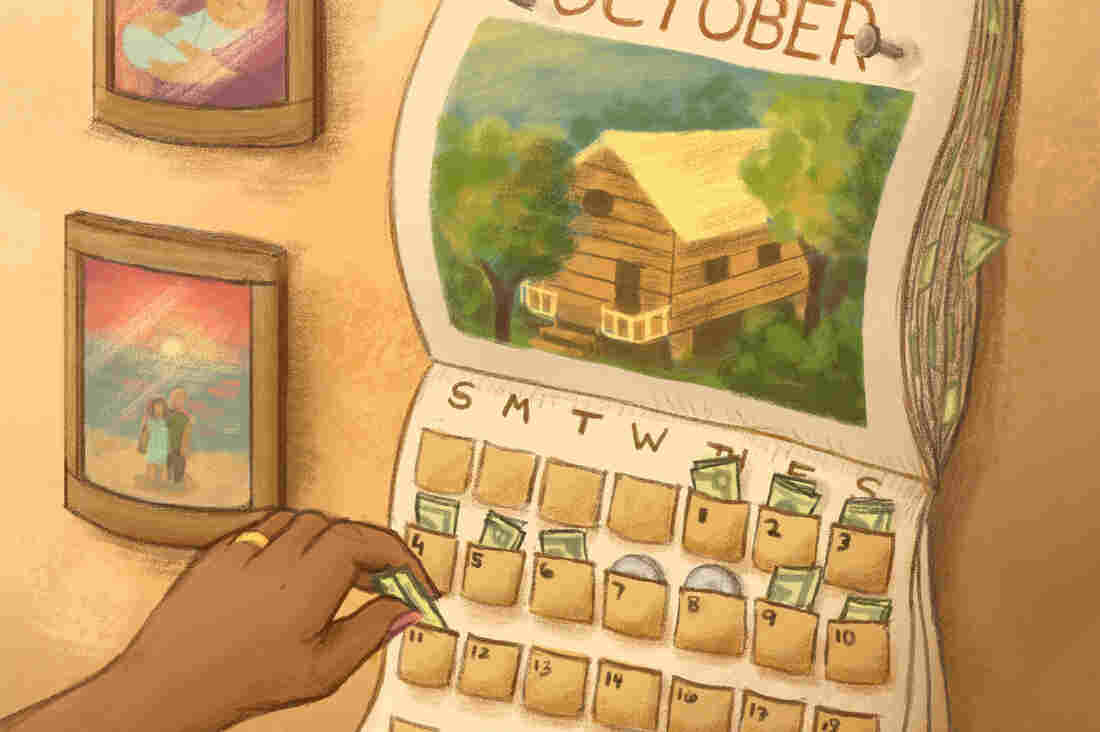 Automatically enrolling workers into a savings plan and then deducting their pre-tax contribution from their paycheck means workers don't see or feel any loss. It sort of tricks our brains into doing the right thing. Annette Elizabeth Allen/NPR hide caption 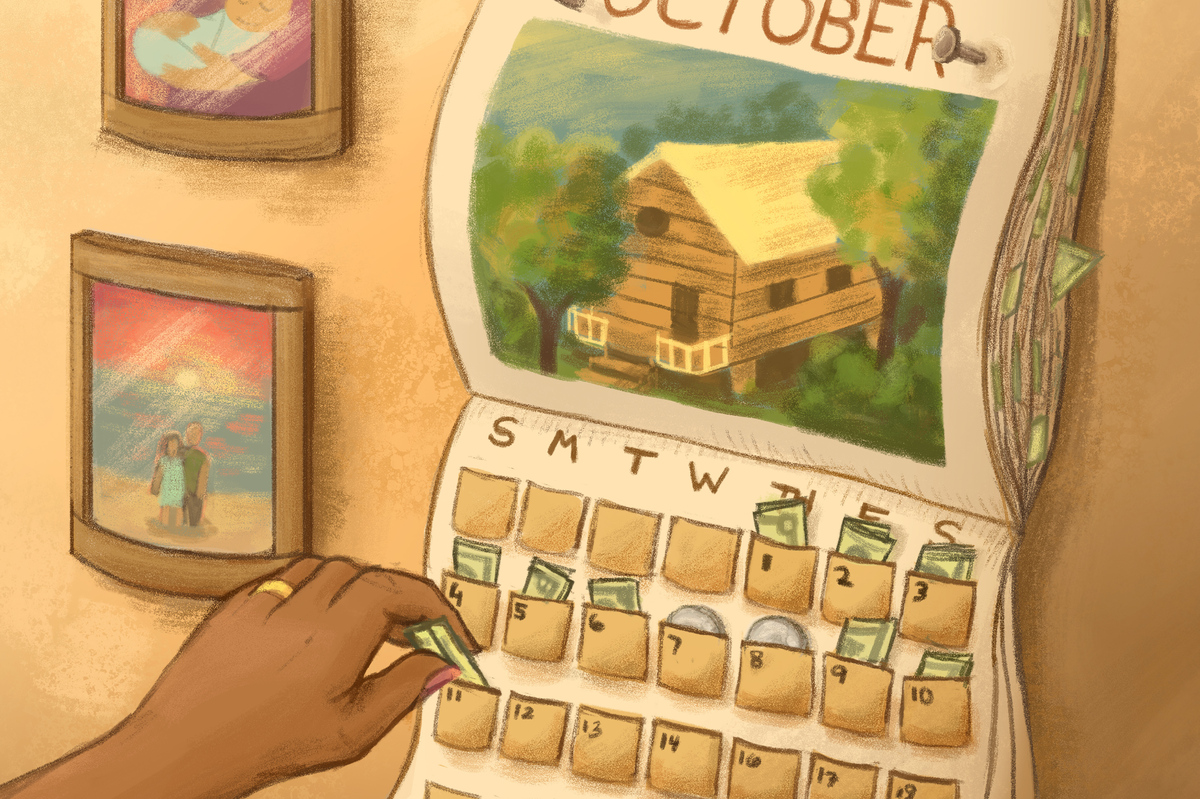 Automatically enrolling workers into a savings plan and then deducting their pre-tax contribution from their paycheck means workers don't see or feel any loss. It sort of tricks our brains into doing the right thing.

At an outdoor market in London, Garfield Bloomfield, 30, who sells vegetables, offers an amused smile when asked if he's saving for retirement yet.

"My wife is not working at the moment because she decided to go back into studies ... and I got kids to take care of," he says. "I would like to save for the future, obviously, but at the moment I'm just working to get by, really."

Many people in the U.S., of course, feel this way too: I can't afford to save. I have student loans. I just don't make enough money. And these are very real problems. Wages have been stagnant for decades — especially in recent years since the recession.

Need A Savings Nudge? Join NPR's Your Money And Your Life Facebook Group

But if you take someone like Bloomfield and enroll him automatically in a retirement savings plan — he doesn't do anything at all; pretax money just starts coming out of his paycheck — odds are overwhelming that he'll keep saving even though he thinks he can't afford it.

That's exactly what's happening in England. Bloomfield's employer will soon be required to enroll him — unless he opts out — but it hasn't rolled out to all employers. The law is being phased in right now.

"We've still got some way to go, but we've got 5 million people saving," says Charlotte Clark, the top government official for retirement savings in the U.K.

And even though people can opt out if they want, they're not. "We're seeing over 90 percent of people sticking with it," Clark says. "That's 9 out of 10 people are deciding that this is the right thing for them."

She says an even higher percentage of lower-income workers stick with it. It's made very clear to them that if they opt out they're losing free money from their employer, she says.

Here's how it works: Employees start putting just 2 percent of their salary into a retirement account. Employers match a portion of that. And the total with the employer match increases over time to at least 8 percent.

So if millions of people can save money and invest for the future, why are we otherwise so bad at saving? It turns out that saving "is at the nexus of just about every behavioral bias we have," says Kate Glazebrook with the U.K.-based Behavioural Insights Team, a nonprofit that's consulting with the government on the program.

In the U.S., many behavioral economists agree. Brigitte Madrian, a professor at the Harvard Kennedy School, says that often, saving feels like losing if we have to take the money out of our own pocket or checking account and put it into a retirement account. Even though we're just squirreling it away for ourselves, it feels like a loss. 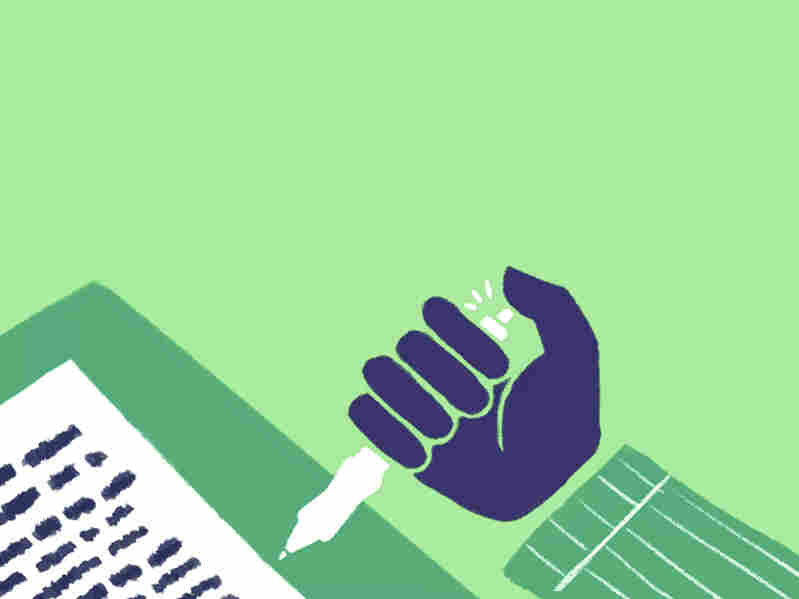 Experts say that sitting down and creating a plan of action makes us 10 times more likely to achieve our goals — especially if we tell friends about our plan to create some gentle social pressure to follow through. Here's a worksheet to help with that. Annette Elizabeth Allen/npr hide caption

"There's a term in the economics and psychology literature called loss aversion," Madrian says. "The idea is that people experience a loss twice as severely as they experience a gain on the upside."

In other words, our aversion to loss overpowers our desire to gain money by investing, especially since the gain is years down the road.

Automatically enrolling workers into a savings plan and then deducting their pre-tax contribution from their paycheck means workers don't see or feel the loss. It sort of tricks their brains into doing the right thing.

"It takes a task that they want to do but that's hard and makes it easy," Madrian says. "The U.S. government figured this out in the 1950s when it came to income tax collection, that the way to get people to pay their taxes was to do it through payroll deduction."

Unfortunately our instincts also make us bad investors. For example, many people have a strong urge to sell stocks after a 20- or 30-percent market crash. "And that's exactly the wrong reaction," says David Swensen, chief investment officer at Yale University. "Buying high and selling low is not a way to make money."

University of Michigan economist Justin Wolfers explains it this way: "Our minds are programmed to try and find order where there's chaos, to see any way we can make sense of the world around us."

So when we see stocks fall for several days in a row, we see a trend and expect them to keep falling, he says.

Back in our hunter-gatherer days, many of these instincts served us well. We wanted to prioritize the present, so we could live through the day. Looking for patterns helped with that too. "If deer always walked along a particular path, then you know where to go hunting," Wolfers says. "The difference with financial markets is in a financial market, randomness may be the norm, even if in much of the rest of our lives, order and predictability is the norm." 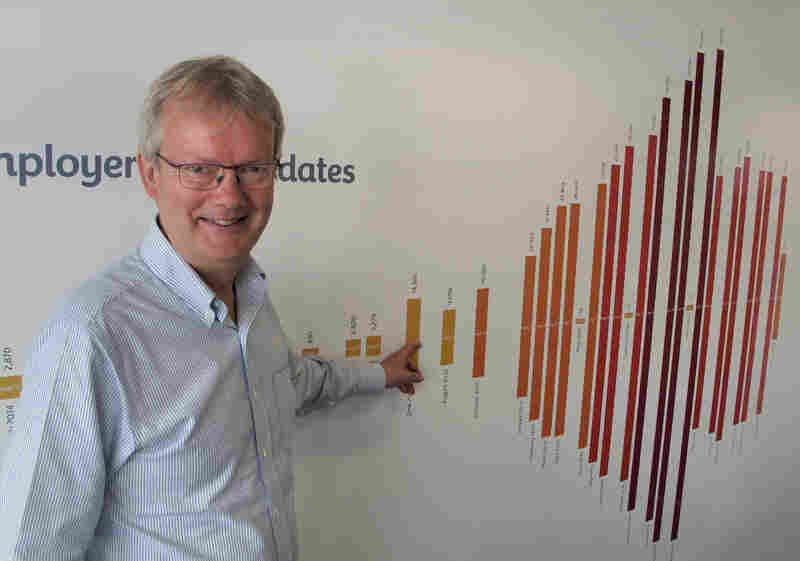 Tim Jones, head of the National Employment Savings Trust, points to a graph of the rollout of the U.K.'s workplace pension law. Chris Arnold/NPR hide caption

For more than half the workers in the U.K. who've been enrolled, their employers have chosen an investment vehicle set up by the government. The nonprofit investment fund was created by Tim Jones, a former bank executive, who has made a point of trying to keep the fees low. He has capped fees at 0.5 percent a year, which, he says, should help workers get a healthy investment return over time.

In his office overlooking the Thames River, Jones says while the program is still rolling out, he expects it to continue to be a success. And there's a precedent: Australia passed a similar law mandating retirement savings plans two decades ago. And now, average everyday Australians altogether have amassed a tremendous amount of money for retirement.

"If you look at the Australian journey for retirement savings plans, that's got to a place where there's between 1 and 2 trillion Aussie dollars in their system," he says. "That just shows you what the power of compound interest can do here."

In the U.S., some employers of their own accord are automatically enrolling workers into retirement plans, and they're seeing similar results: The vast majority of workers stick with it. Behavioral economists and at least a few members of Congress would like to see a law in the U.S. like the one in the U.K.