Accessibility links
CBS' 'Supergirl' Struggles To Get Off The Ground In the new series, Melissa Benoist's Supergirl is overshadowed by her boss, played by Calista Flockhart. David Bianculli asks: "Shouldn't the most interesting character in Supergirl be ... Supergirl?" 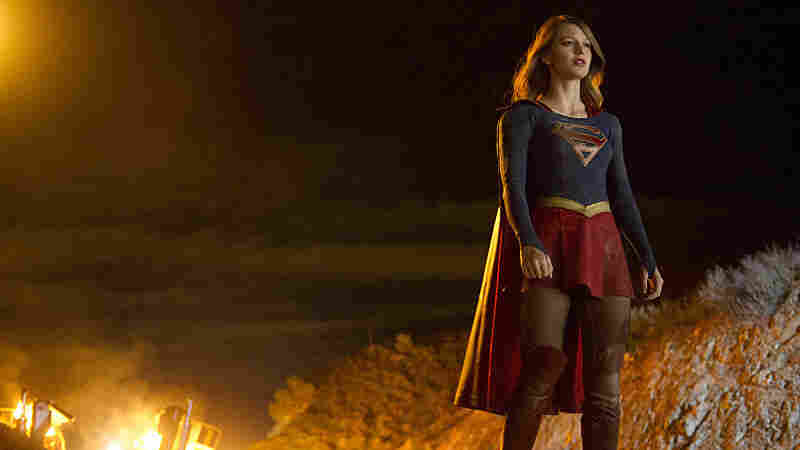 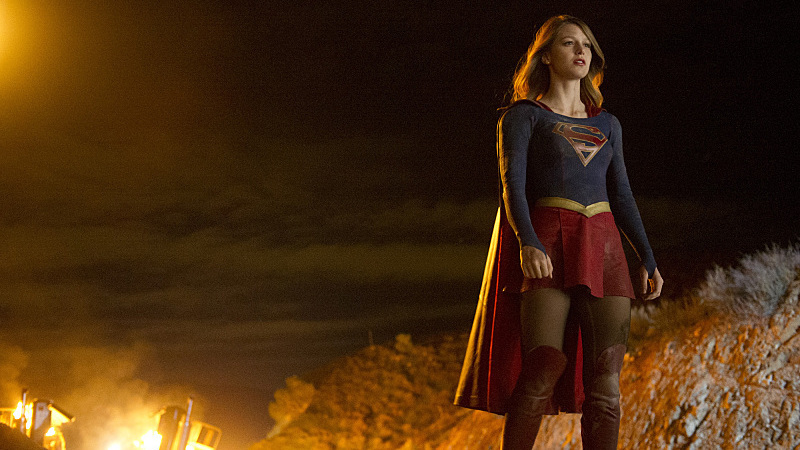 Melissa Benoist stars as Supergirl in the new CBS series.

Supergirl, premiering Monday night on CBS, follows in the same path of other prime-time DC Comics superheroes established on the CW by Arrow and The Flash. And they're only part of a much wider trend, because superheroes are as popular, and profitable, on TV as they are in the movies.

With Supergirl, Greg Berlanti and his Arrow and The Flash producing team are attempting to mount a modern, youth-appeal superhero series not for the CW but for older-skewing network CBS. The Superman family franchise is as reliable, and family-friendly, as it gets: The Adventures of Superman was TV's first superhero hit show in the '50s, and more recent times have given us such successful variations as Lois and Clark: The New Adventures of Superman and Smallville, which, respectively, were a prequel and a pre-prequel to the Man of Steel story. A syndicated Superboy series was less memorable — and Supergirl, based on the opening episode, is flirting with being forgettable also.

Melissa Benoist, from Glee, plays Kara, whose space capsule from the doomed planet Krypton takes a time-warp detour on her way to protect her younger cousin, who was headed for Earth. When she finally gets there, because of that time warp, he's now her older cousin, already established in Metropolis as Superman.

She grows up in a different place with a secret identity, as he did, and ends up working for a powerful media figure in National City. And that's where this Supergirl show provides its biggest, and only, spark — because that media titan, named Cat Grant, is played by Calista Flockhart.

Long before she starred in Berlanti's Brothers and Sisters, Flockhart was the controversial face of new feminism on David E. Kelley's Fox comedy series Ally McBeal. And in Supergirl, essentially playing the Meryl Streep part from The Devil Wears Prada, Flockhart injects the show with some very welcome energy and fun.

It's OK for supervillains to be more interesting than the comic book heroes — that's been true, especially in DC Comics, ever since the first appearances of The Joker and Catwoman. But Supergirl shouldn't be less interesting than her boss at work. It's like watching Perry White steal every scene from Clark Kent — and even when Cat Grant uses her media platform to christen the new flying hero Supergirl, Kara, though she hates the name, doesn't put up much of a fight.

Take away Cat Grant, though, and this new Supergirl series rarely gets off the ground. In tonight's premiere episode, little of this series jells — especially not the idea that Kara and her equally super cousin, because they live in different cities, seldom make contact with one another. There's always Skype. And these two could impulsively fly in for a quick visit whenever they wanted — and without a plane.

The superproblem with Supergirl, though, isn't logic. It's focus. Shouldn't the most interesting character in Supergirl be ... Supergirl?