Accessibility links
'Natural World': In Which We Make An Expotition To The Hundred Acre Wood The Natural World of Winnie the Pooh is a new book about Ashdown Forest, the place that inspired A.A. Milne to create his classic children's tales. NPR's Ari Shapiro visits with author Kathryn Aalto. 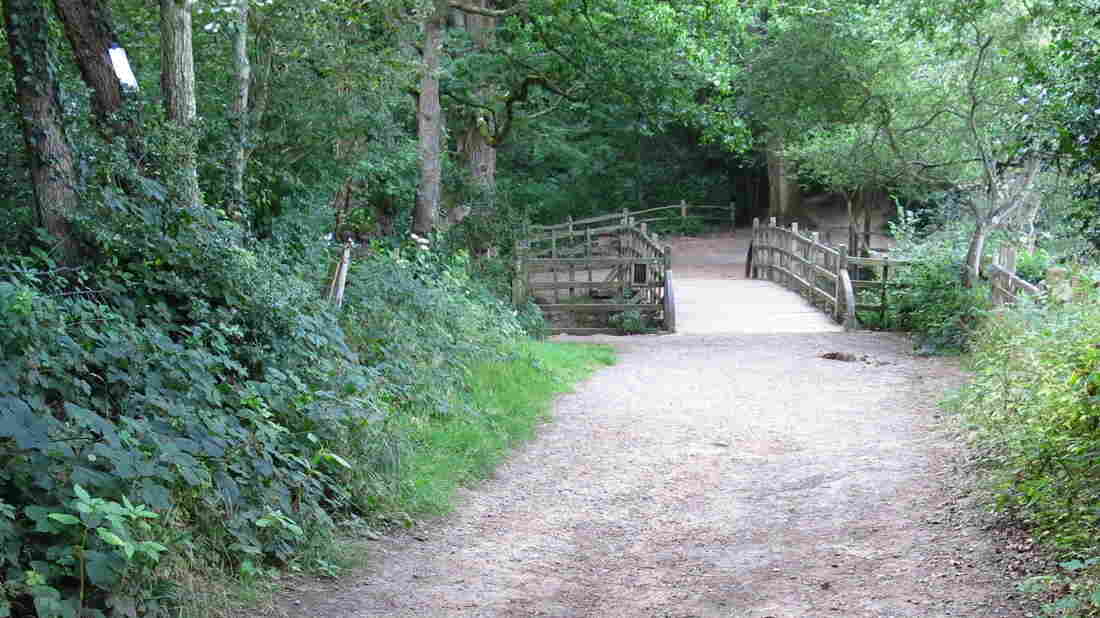 Generations of children have leaned over the side of this bridge for a game of Poohsticks in the real-life Hundred Acre Wood. Rich Preston/NPR hide caption 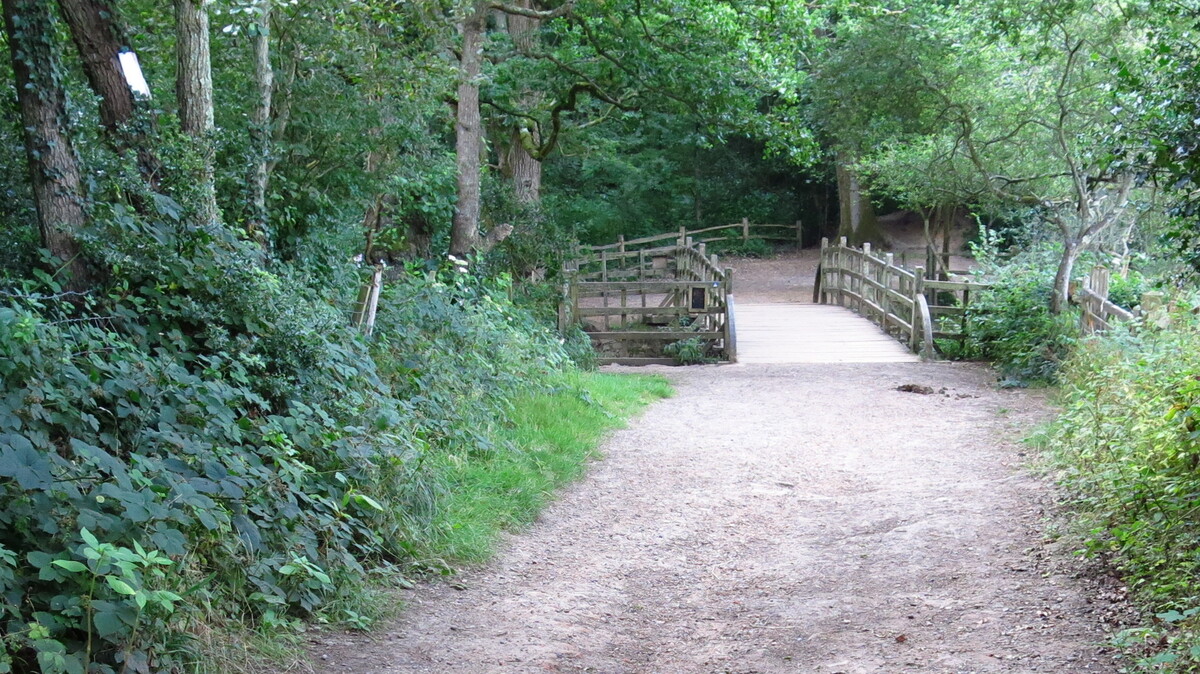 Generations of children have leaned over the side of this bridge for a game of Poohsticks in the real-life Hundred Acre Wood. 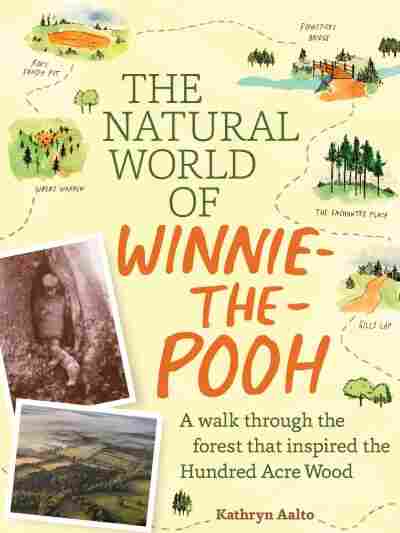 The Natural World of Winnie-the-Pooh

A Walk Through the Forest That Inspired the Hundred Acre Wood

We'd like to visit a place that you've likely been before — maybe not in real life, but in your imagination. It's a land that inspired heffalumps and expotitions (yes, that spelling's correct). In real life, it's a forest in southeast England — but you know it as Winnie the Pooh's Hundred Acre Wood.

The setting is sort of the quintessential English countryside: Rolling hills, trees, squares of farmland, heather and gorse and a perfectly blue sky day — perhaps the only thing that's not very English about the setting.

"This is the real landscape that inspired Milne to write his famous Winnie the Pooh stories," says Kathryn Aalto. She's the author of The Natural World of Winnie the Pooh: A Walk Through The Forest That Inspired the Hundred Acre Wood.

As she explains, nearly 100 years ago, the author A.A. Milne and his son Christopher Robin lived near Ashdown Forest. Milne watched his son play with his stuffed animals here; eventually Ashdown Forest became the Hundred Acre Wood, and Christopher Robin's adventures with Winnie the Pooh became some of the most beloved children's stories of all time.

Just a little ways down a path, there's a cluster of trees. "It's called the enchanted place, there are either 63 or 64 trees there," Aalto says. Christopher Robin was never able to count the exact number of trees — which was how he knew it had to be magic.

Celebrate Winnie-The-Pooh's 90th With A Rare Recording (And Hunny)

In the enchanted place, the trees make a circle, almost like a shelter. Dappled light streams through the rustling leaves overhead. It's the highest spot in Ashdown forest. The ground is flat and inviting; Milne describes the way it's different from the rest of the forest:

Being enchanted, its floor was not like the floor of the Forest, gorse and bracken and heather, but close-set grass, quiet and smooth and green. It was the only place in the Forest where you could sit down carelessly, without getting up again almost at once and looking for somewhere else. Sitting there they could see the whole world spread out until it reached the sky.

In the books — and because of that, in real life — it's a transitional sort of place, a place to say goodbye to childhood. "Every time I'm here I sort of it's really emotional actually," Aalto says. "It's saying goodbye to free time, the protection of mother and this sort of thing and father, and leaving and going out into the world. And so there's great symbolism here." 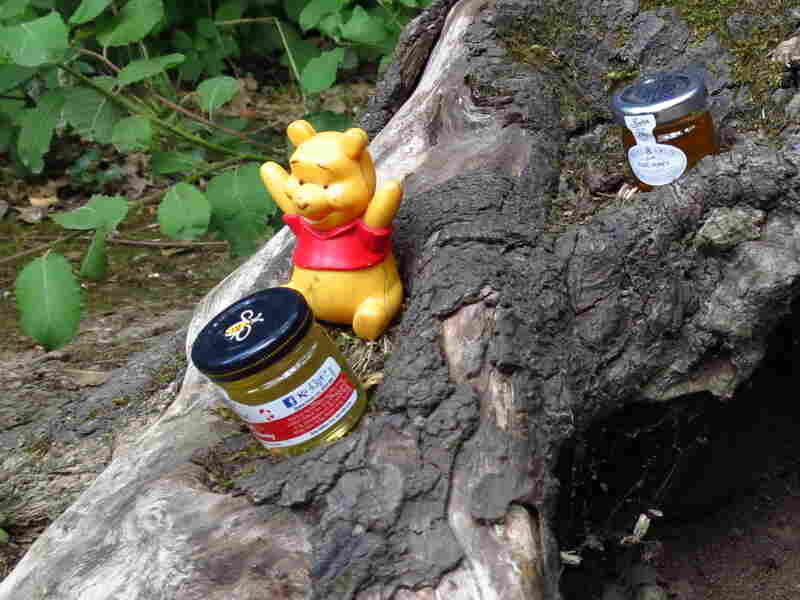 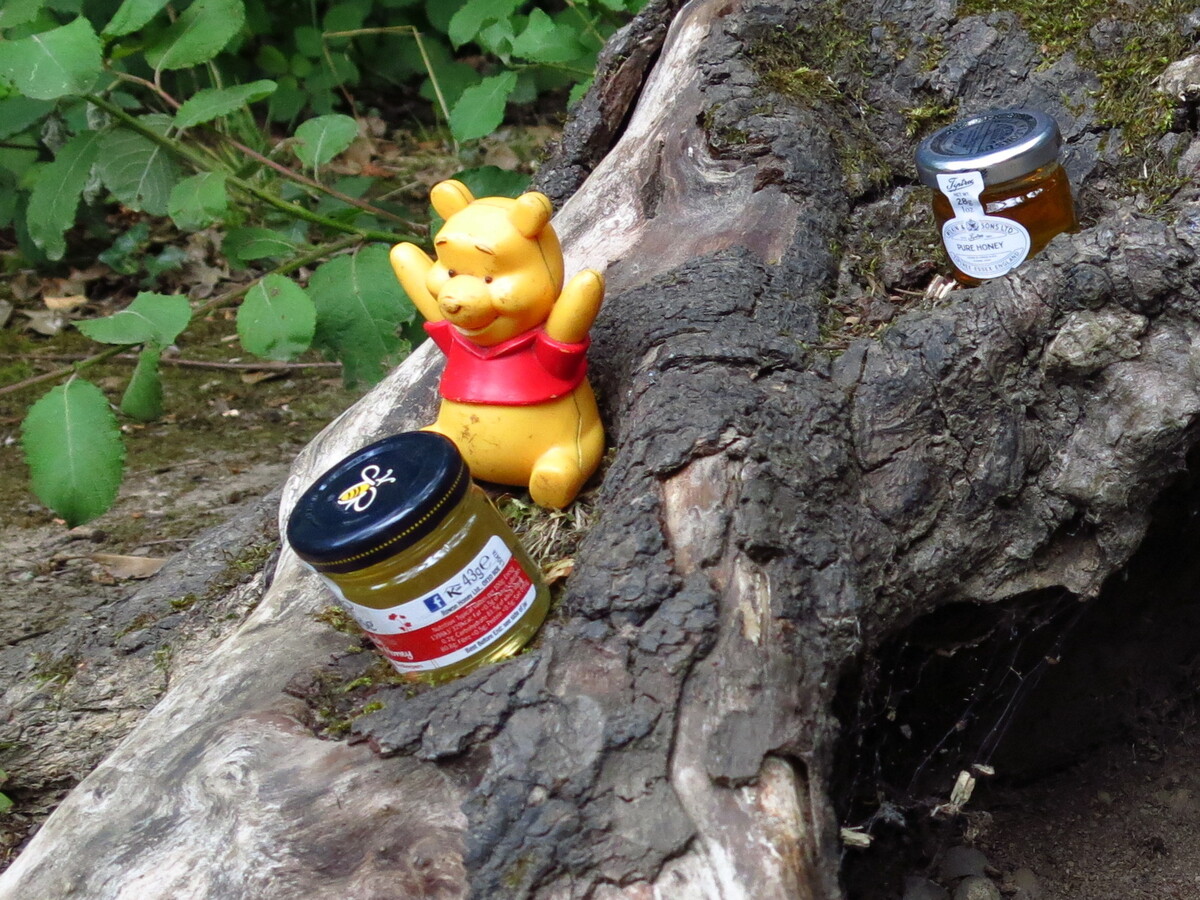 Visitors leave presents for Winnie the Pooh in Ashdown Forest.

Next on the agenda: A game of Poohsticks — a simple game that kids of any age can play. Each person stands on a bridge, holding a stick. Drop your stick in the water from one side of the bridge, and see whose stick comes out the other side first ... it's a sort of race.

At the Poohsticks bridge, lots of children are playing with their parents and grandparents. "The wonderful thing about this game is that there is no strategy," Aalto says. Generations of children have leaned over the bridge, waiting to for their stick to float under and come out the other side.

Ten-year-old Anna Matthews is there with her family; she's wearing an Avengers t-shirt, but she says she also enjoys the calmer pleasures of Poohsticks. "I think it's nice to sort of unwind and sort of get away from the violent side of some movies and books but go towards the Winnie the Pooh where it's nice and sort of teaches you a story as well. So I like him."