Accessibility links
Spoiler Alert: Latest Death May Spoil 'Walking Dead' For Some Fans The popular zombie show has always been willing to bump off any character at any time — but critic Eric Deggans says a recent death (if it really happened) will have to be handled carefully.

WARNING: The column contains numerous spoilers regarding Sunday's episode of The Walking Dead and how it connects to events in the graphic novel. If you wish to remain in the dark — and have somehow avoided the online explosion of fan anguish until now — be warned that this piece will discuss lots of details from Sunday's show. 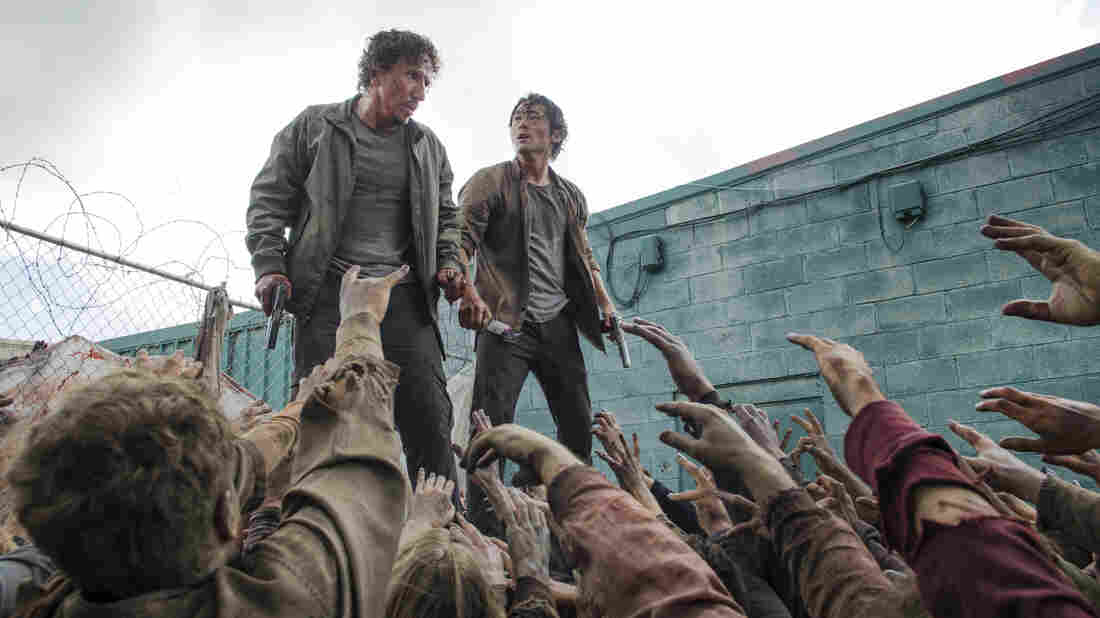 Could this be the end for Glenn? The fan favorite character was seen last week tumbling off this dumpster into a throng of the undead. Gene Page/AMC hide caption 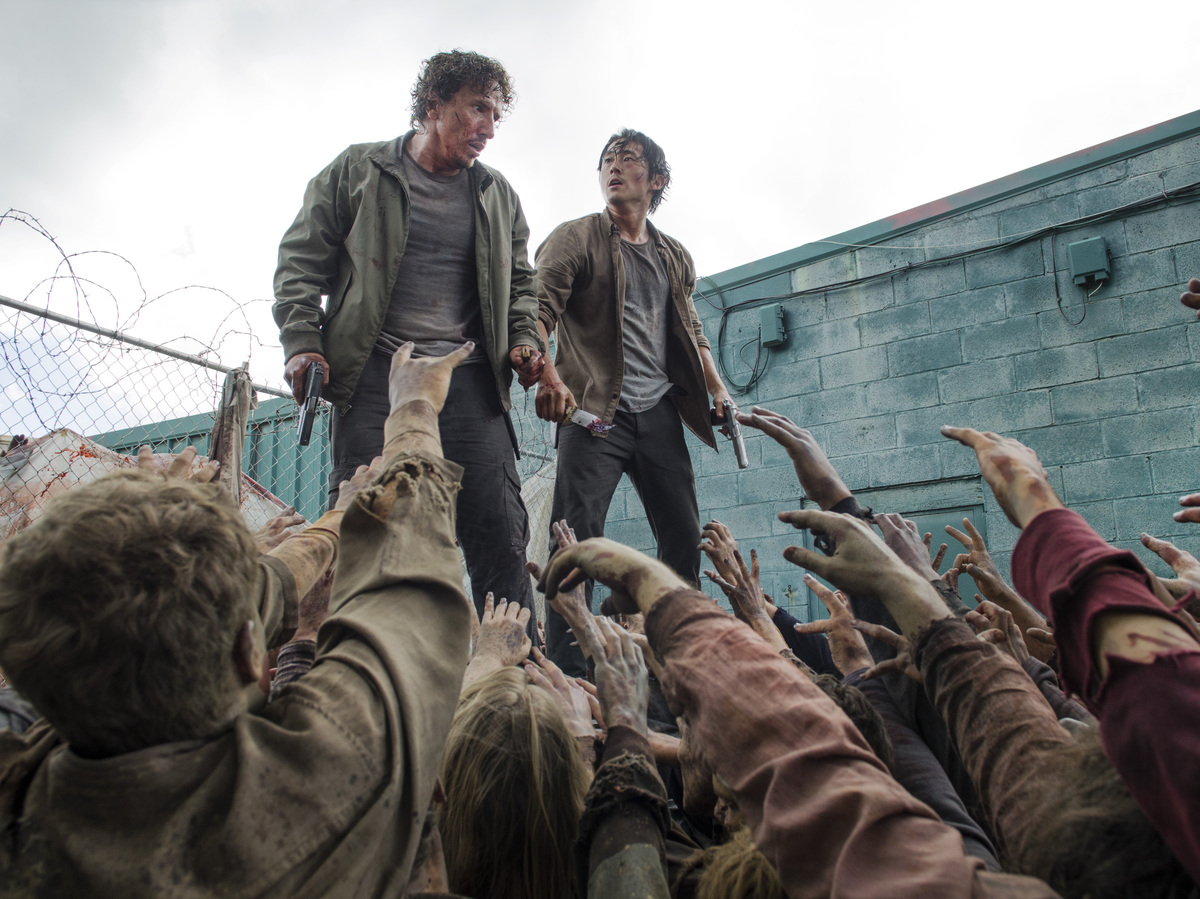 Could this be the end for Glenn? The fan favorite character was seen last week tumbling off this dumpster into a throng of the undead.

It was the death some fans of The Walking Dead had been anticipating for a long time. It just didn't come in the way that we expected. If it actually happened at all.

That's the topsy turvy world of expectations and predictions that producers of the show dropped us into Sunday, when they showed beloved character Glenn Rhee falling off a dumpster and into a swarm of flesh-eating zombies (called "walkers" on the show, which refuses to acknowledge the term or pop culture history connected to the z-word).

It was an ignominious end for a beloved character. Glenn was with another guy, Nicholas, who was trying to redeem himself; he had let many friends die in the past by abandoning them during walker attacks. Then, when a crowd of undead trapped the two on top of a trash bin, Nicholas shot himself in the head and fell over into the walkers, taking Glenn with him.

Steven Yeun's 'Glenn': Slaying Zombies And Getting The Girl

But did Glenn really die? We did see footage of him screaming as someone's innards were ripped out by walkers — apologies if you're having a meal while reading this — but there were plenty of signs something else was afoot.

AMC airs another show, Talking Dead, after each Walking Dead episode to discuss what happened with an all-star panel. Generally, when a major character dies, the actor playing that person comes on the show to debrief fans on what happened and let everybody mourn a bit.

But actor Steven Yeun, who has soared playing the pizza delivery guy-turned-zombie slayer, didn't get that victory lap Sunday. In fact, no one from the Walking Dead appeared on the show. Instead, executive producer Scott Gimple sent a note, which read, in part: "In some way, we will see Glenn — some version of Glenn, or parts of Glenn — again, either in flashback or in the current story to help complete the story." Um, okay.

It seems highly unlikely the series would kill off a beloved character who has been on the show since the first season without giving him more of a sendoff. Disbelieving fans online are speculating that Glenn pulled some MacGyver-like maneuver to avoid getting killed; more pragmatic folks think his wife, Maggie, is pregnant — and whatever happened, we'll get the backstory in a flashback episode next week. Perhaps we'll even see Glenn as a walker (next Sunday's episode is supersized at 90 minutes, so anything seems possible).

Fans who have kept up with The Walking Dead graphic novel have been waiting for something like this ever since Glenn and the show's characters entered Alexandria, the walled-off encampment where they now live. In the books, Glenn is beaten to death there by a brutal villain called Negan, who hasn't appeared on TV yet.

And those of us who've watched the show for a long time knew the TV series probably wouldn't kill Glenn in the exact same way. But to snuff him out in a fall off a dumpster? Really?

Making the sorrow worse is the special space Glenn holds for fans of diversity on TV. His character entered the Walking Dead's story in the typical space action shows allow for Asian characters; he was the plucky sidekick who helped save the hero.

But Yeun — who emigrated to America with his family from South Korea as a child — excelled in playing Glenn as a character who evolved into much more. He avoided the typical asexual stereotypes for Asian men, married his sweetheart Maggie and became a powerful voice of experience among the survivors of zombie apocalypse.

Of course, all this chatter is exactly what The Walking Dead needs right now. It takes a break from new episodes during the winter and its ratings are strong but down from its season premiere. Now in its sixth season, it needs a storytelling jolt to keep fans engaged and remind them of the series' unspoken mantra — almost any character can die at any time.

This is a delicate dance producers are attempting. If the resolution of Glenn's story feels needlessly drawn out or inauthentic, fans will blame the show for fumbling the exit of an important character. And if he didn't die at all, viewers may feel the show toyed with their steadfast attention to plot details and affection for the character.

My hunch is that last Sunday's moment was just a warning shot; a jolting announcement of Glenn's passing that will be fully explored in the episode to come.

Is it too late to hope for a crossover episode where Doctor Who's time-travelling hero comes to the rescue with Game of Thrones heartthrob Jon Snow in tow?