Accessibility links
After 40 Years, Dungeons & Dragons Still Brings Players To The Table Michael Witwer, who has written a book about game co-creator Gary Gygax, says D&D does something that online games don't: It brings players physically together to participate in group storytelling. 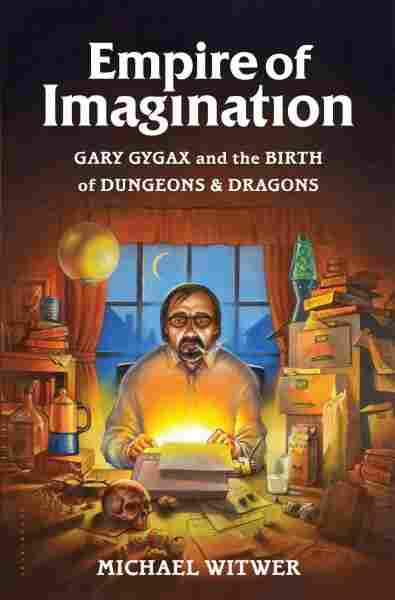 Gary Gygax and the Birth of Dungeons & Dragons

If you play today's massively multiplayer online role-playing games — World of Warcraft or Final Fantasy, for example — you have a 1970s tabletop game to thank, says author Michael Witwer.

Witwer has just written a biography of Gary Gygax, the co-creator of Dungeons & Dragons.

"Even first-person shooters like Call of Duty have some of the roots at least in tabletop role-playing games," he tells NPR's Ari Shapiro.

From both a gaming — and nongaming — standpoint, D&D had far-reaching effects. Comedian Stephen Colbert, journalist Anderson Cooper and writer Junot Díaz all cite Dungeons & Dragons as an influence.

"It really became this workshop of imagination for people who played the game," Witwer says. "I think Junot Díaz himself called the game itself an apprenticeship in storytelling. A lot of writers, a lot of artists, a lot of actors, have talked about how this game was so influential teaching them to imagine."

Gygax died in 2008. Witwer talks with Shapiro about his new book, Empire of Imagination, and how the game remains popular today.

On what the game is

Dungeons & Dragons is a game that's played first of all on the tabletop — at least originally it was. It's a game where you all get together. The game is refereed by someone called the Dungeon Master who kind of describes what the rest of the gamers see and hear. So the rest of the participants who work together cooperatively make these various characters like fighters and wizards and thieves and whatnot, and you kind of react to what the Dungeon Master lays out before you.

An Adventurer Returns To The Dungeon In 'Dice And Men'

On the 1982 film Mazes and Monsters, and the way the media talk about Dungeons & Dragons

Mazes and Monsters was a thinly veiled retelling of the James Dallas Egbert III story. What happened basically was, in 1979 a young Michigan State student disappeared mysteriously. He had a lot of issues that he was struggling with. And he also happened to play Dungeons & Dragons.

So the kid disappears, and a private detective shows up named William Dear who theorizes — once he sees this kid has been playing this game — that perhaps the human mind can't quite deal with the idea of pretending you're a character and all this stuff, and it really kind of fuzzies the border between the real and the imaginary.

So this particular theory gets picked up by the media and it becomes an absolute media circus. The funny thing is that Egbert himself was discovered a couple of weeks later, and his disappearance had nothing to do with Dungeons & Dragons.

Actually being in a room physically sitting at a table with nothing but pencils and paper and dice. There's something very special about that, and it's kind of a social experience that's pretty hard to frankly re-create over any type of electronic media.

The game itself — the tabletop version, the original — is still alive and well. Now it's in its fifth edition and it's selling like crazy. ...

Many of the derivative games — and maybe it's all of the derivative games we've talked about — whether it be computer role-playing games or whatnot, they actually lack most of the most important fundamental elements of a role-playing game. ... That is, sitting around with your friends and participating in this kind of group storytelling exercise: actually being in a room physically sitting at a table with nothing but pencils and paper and dice. There's something very special about that, and it's kind of a social experience that's pretty hard to frankly re-create over any type of electronic media.