Accessibility links
It's Astounding ... Time Is Fleeting ... And 'Rocky Horror' Is 40 Critic Bob Mondello has been doing the Time Warp longer than anyone: He saw the Rocky Horror Show onstage in London, before it became a movie, and now he reflects on 40 years of midnight madness. 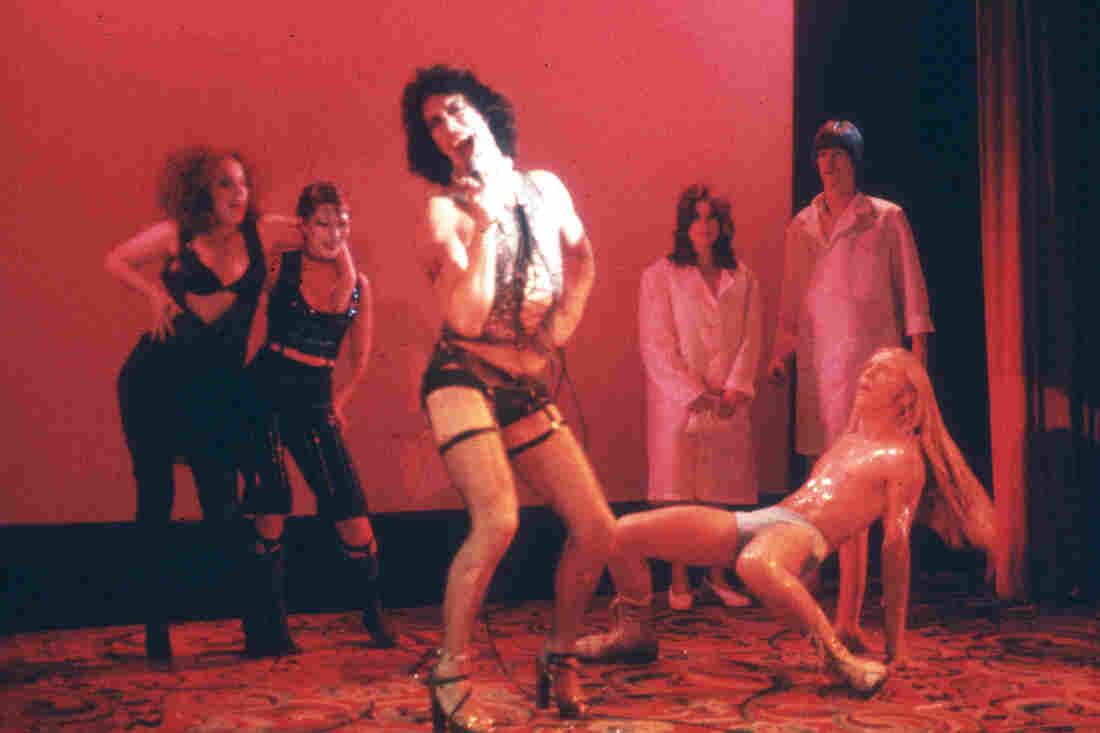 Tim Curry performs in a staging of The Rocky Horror Show in the 1970s. Michael Ochs Archives/Getty Images hide caption 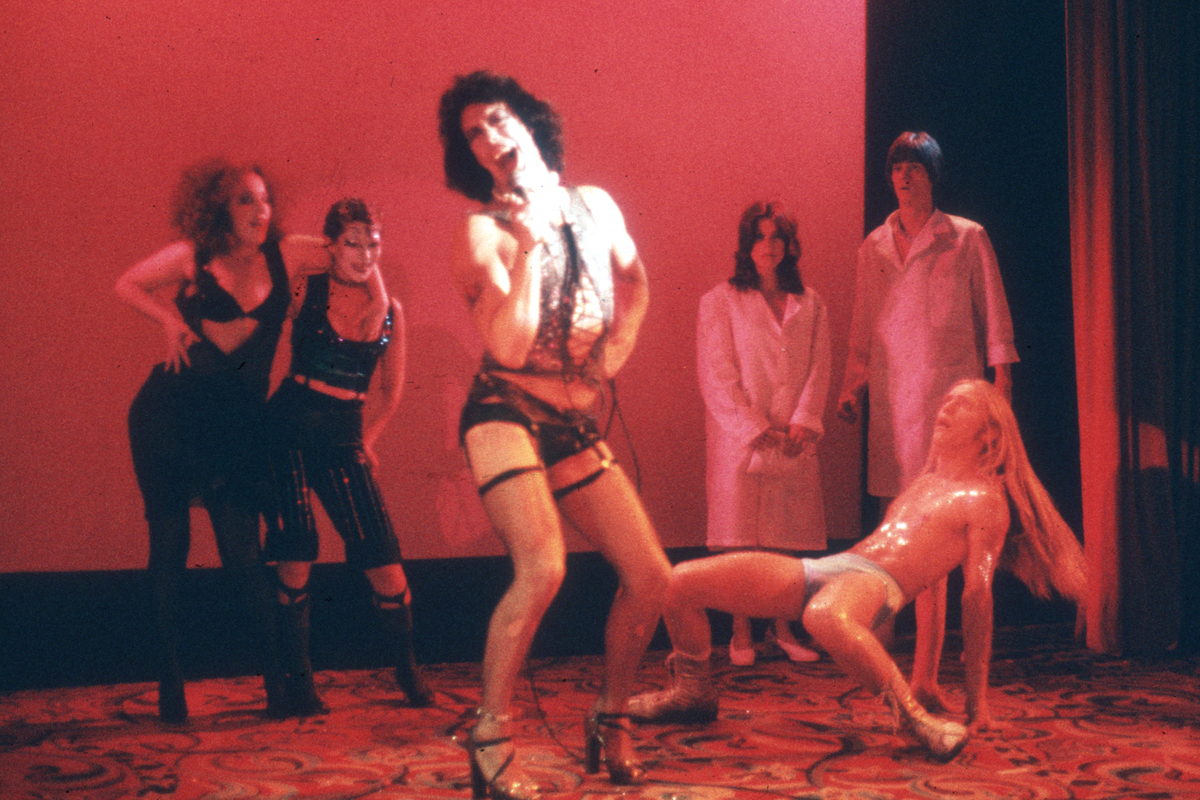 Tim Curry performs in a staging of The Rocky Horror Show in the 1970s.

It's astounding / time is fleeting / madness takes its toll ...

If you recognize those lyrics from the Rocky Horror Picture Show, you know what Riff-Raff means by madness: midnight show audiences shouting at the screen and doing the Time Warp in movie theater aisles as they've been doing for decades. This weekend will be Rocky Horror's 40th Halloween.

Rocky Horror and I go way back, so earlier this month, when All Things Considered producer Graham Smith bounced up to my desk crooning "Let's do the Time Warp agaaaaaaain," I said sure.

He didn't know this, but I'd been doing the Time Warp since two years before the movie came out. I took my first jump to the left (that's how you do the Time Warp) in November of '73. A buddy I was visiting in London dragged me — no pun intended — to a musical so new, he figured a deprived theater nut from the colonies wouldn't have heard of it yet.

His pitch was that the show riffed on old movies — something that was true of half of Broadway back then: musicals starring Debbie Reynolds, Ruby Keeler, the Andrews Sisters ... so I figured I knew what we were in for.

'Til we got to the theater. It was a decrepit old movie house on King's Road, with lights kept low so you couldn't see how torn up everything was. Or that the feather-boa'd, high-heeled patron next to you was not necessarily a woman.

A runway stretched way out into the audience, and after three pretty conventional numbers about a sci-fi double feature, a girl named Janet, and a Frankensteinian castle, down that runway strutted a stunning creature — fishnet stockings, leather corset, mascara to swim in, ruby-red lips outlined in black — singing in a rich baritone.

It was 27-year-old Tim Curry as Dr. Frank-N-Furter. By the end of that number, I was hooked, as was the rest of the audience, most of whom seemed already to have seen the show several times. There was no album yet, remember, but nearly everyone was singing along with his refrain about being "just a sweet transvestite, from transsexual Transylvaniaaaa ... uh huh."

Flash forward a couple of years, and I'm now working as a publicist for a chain of suburban movie theaters headquartered in Washington. D.C. On the schedule one day is, not The Rocky Horror Show but The Rocky Horror Picture Show — and it's my job to make it a hit.

Couple of problems: Nobody in the U.S. has ever heard of Rocky Horror, and my boss will not let me dress our 16-year-old male ushers in fishnet stockings. The movie flopped — seriously, it bombed, pretty much everywhere in the U.S.

Nobody in the U.S. has ever heard of 'Rocky Horror,' and my boss will not let me dress our 16-year-old male ushers in fishnet stockings.

But at the Waverly Theater in Manhattan, it was reborn as a cult hit when midnight shows started attracting repeat fans. They dressed up as the characters, talked back to the screen, threw rice during a wedding sequence — and before long, fan groups in Pittsburgh and other cities were "shadowcasting" — acting out the whole movie in front of the screen as it played.

Four decades later, they still are. The folks who shadowcast in D.C. call themselves the Sonic Transducers and are relative newbies. The group's only been around since 2009, though some of its members go back a bit further.

"This is my 26th year!" proclaims Jeff Baker, who'll be shadowing Columbia at tonight's performance but who can shadowcast all the parts. Before the show, along with the rest of the cast, he's hawking booty bags containing noisemakers to blow, goodies to throw ... with a few rules

"You throw up and back," bellows a fellow cast member. "Do not throw at the screen or the actors."

Then once the crowd's settled in, there's the welcoming of the "virgins" — folks who've never seen Rocky Horror before. There are about 50 first-timers tonight, welcomed loudly into the fold, and put through a few mildly vulgar initiation rites, once it's been ascertained that everyone's over 18.

And then, finally, it's time for the main event: the movie everyone is ready to mock mercilessly with shout-backs, singing, underwear-clad runs through the lobby, and jinks high and low, all of them led by the Sonic Transducers, who have come to see this as a kind of calling.

The film that was outrageous and a flop in its first release has become innocent and a blockbuster over time.

"I cannot imagine my life without Rocky," avers Leandra Lynn, who's sort of the cast's mother hen.

"I met my fiance here. All of my friends are from here. Before I started doing Rocky I was incredibly socially awkward. I didn't have anybody that I really thought understood me. And then I joined Rocky and it clicked: All of us were freaks, but we were all accepting of our different freakitude."

Which was always the point with Rocky Horror. There was a transgressive, sort of outlaw quality to the freakitude 40 years ago. Less now (it takes more to shock people today than boys wearing mascara.) The film that was outrageous and a flop in its first release has become innocent and a blockbuster over time — more than $100 million in midnight shows just in the U.S., and countless millions elsewhere.

And the stage show is equally international — sweet transvestites strutting their stuff everywhere from Korea to Argentina to Germany, Japan, New Zealand, Poland, South Africa, Iceland, Brazil. Rocky Horror's gone mainstream enough enough these days that it can even play on network TV.

In a reboot that'll arrive just about a year from now. Orange is the New Black's Laverne Cox will be Dr. Frank-N-Furter.

That's would seem to be a huge change, in a way. But watching the crowd dancing in the aisles in D.C., you sense that Rocky Horror fans will no doubt adapt. It is, after all ... "just a jump to the left."