Accessibility links
'The Other Paris' Goes Beyond The Banlieues Luc Sante's cultural history focuses on the darker corners of the City of Lights, and the rougher and more disreputable citizens of the French capital who, he argues, have made Paris what it is today.

'The Other Paris' Goes Beyond The Banlieues

'The Other Paris' Goes Beyond The Banlieues 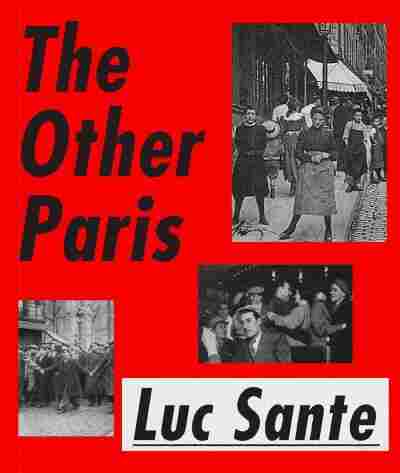 In a recent report from the banlieues, the largely immigrant Parisian suburbs that have been at the heart of the city's debates about assimilation and Islam, The New Yorker's George Packer illustrates the immediately noticeable separation between these neighborhoods and central Paris as he travels in from the city. "The trip begins in a tunnel," Packer writes, "and when the train emerges the boulevards lined with bistro awnings are gone. Even the weather seems different — damp and murky, with a wind blowing from the southwest."

Cities today aren't defined by physical borders as immediately imposing as walls, but they remain filled with less perceptible barriers that mark off the distinctions between the privileged and the outsiders. The Other Paris, Luc Sante's work of cultural history, focuses on the latter: The rough and disreputable citizens of the French capital, the parts of the city that have remained figuratively, and at times literally, in the dark — but which, Sante argues, are directly responsible for making the city of light what it is today.

Sante, a regular contributor to The New York Review of Books, is inspired by the 19th century flaneurs who took the exploration and study of their city as a life's calling. And in that vein, Sante clamors for a city that rewards that exploration. He longs for a city closer to how it looked in the 19th century, one where buildings would regularly have "a shop on the ground floor; the shopkeeper's dwelling on the mezzanine level; a bourgeois family upstairs from the mezzanine, on the 'noble floor;' then each succeeding story would house people of progressively lesser income." Sante laments the divided city that he lives in today, which he describes in words that echo Packer's description of the banlieues: "There are indeed a few places in Paris where the poor can live, but the requirement is that those places be inhuman, soulless, windswept."

Sante romanticizes Paris' dirty and vulgar past much like other writers look back fondly on New York in the 1970s.

Sante's history offers a valuable perspective on how the development of Paris starting in the 19th century affected its more vulnerable citizens. The most vivid chapter describes the decades after King Louis Philippe I ordered a military wall to be built around the city in 1841, an act that doubled its previous size and also established what came to be known as "the zone," an area outside the city walls where construction was forbidden.

Both the outskirts of the new Paris and "the zone" became home to illicit acts, but also represented an idyllic freedom. "While the Zone was a netherworld, a gray area, a borderland teeming with the sorts of shadowy activities that thrive on margins," Sante writes, "it also at the same time represented a door to nature. ... You could drink and dance and smoke and swear while surrounded by garlands of flowers and Japanese lanterns under the trees."

Sante's book shines when he's offering this kind of vivid detail, whether through the book's numerous historical illustrations or his written profiles of its inhabitants. The sheer scope of The Other Paris — which moves fluidly from before the French Revolution to today and covers political movements and culture as well as sex work, crime and other topics regularly associated with a city's "underbelly" — can make it feel unfocused and cursory at times. But you'll be drawn back in by some of the unheralded characters Sante finds in Paris' past, from Alexandre "Marius" Jacob, a burglar from the turn of the 20th century who "stole only from the rich" and "at one point ... bought a hardware store, where he could dismantle safes at his leisure," to a gang called "Les Tatoues" whose members in 1902 were covering their bodies in tattoos of "guillotines, hearts pierced with arrows, the words 'Child of Misfortune' – and also portraits of Paul Kruger, who led the Boers against the British in South Afica from 1899 to 1902, because Anglophobia was very much alive in the streets."

Sante romanticizes Paris' dirty and vulgar past much like other writers look back fondly on New York in the 1970s — which is to say that the less appealing aspects of cities that are "vivid and savage and uncontrollable" get less attention. But while Sante has a soft spot for that very particular version of Paris, his book also points to a messier takeaway. It leaves us with two competing emotions: A political duty to close the gaps of opportunity symbolized in Paris by the banlieues, and the vivid reminder that a city's most vibrant elements, the parts that will later be memorialized, often emerge from a mix of urgency and disrepair.

Tomas Hachard reviews books for NPR, Maclean's, the Globe and Mail, and others.