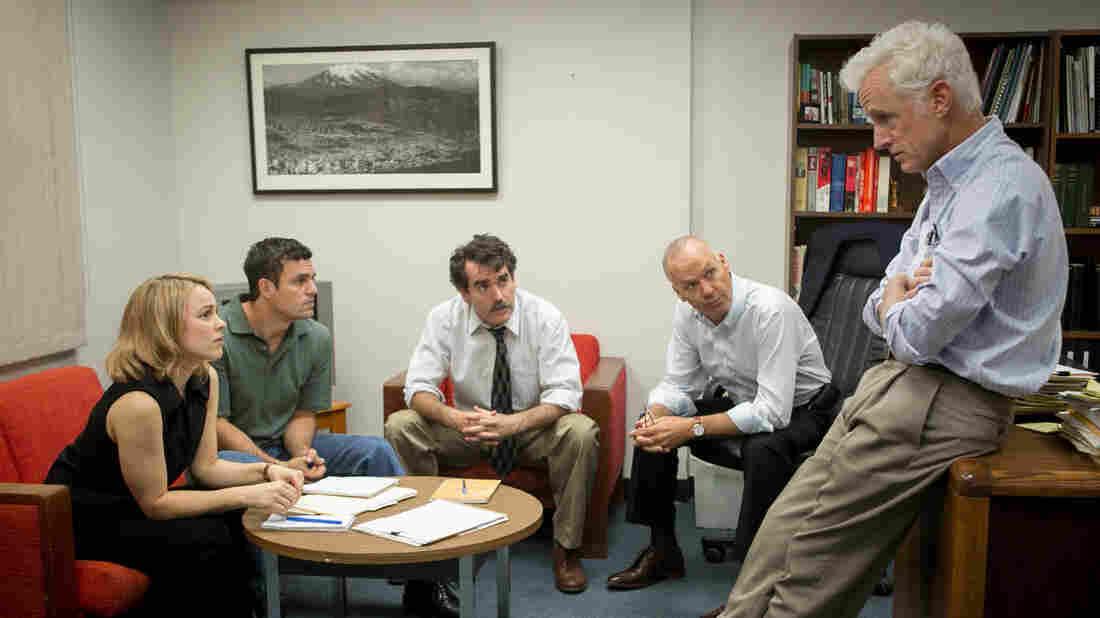 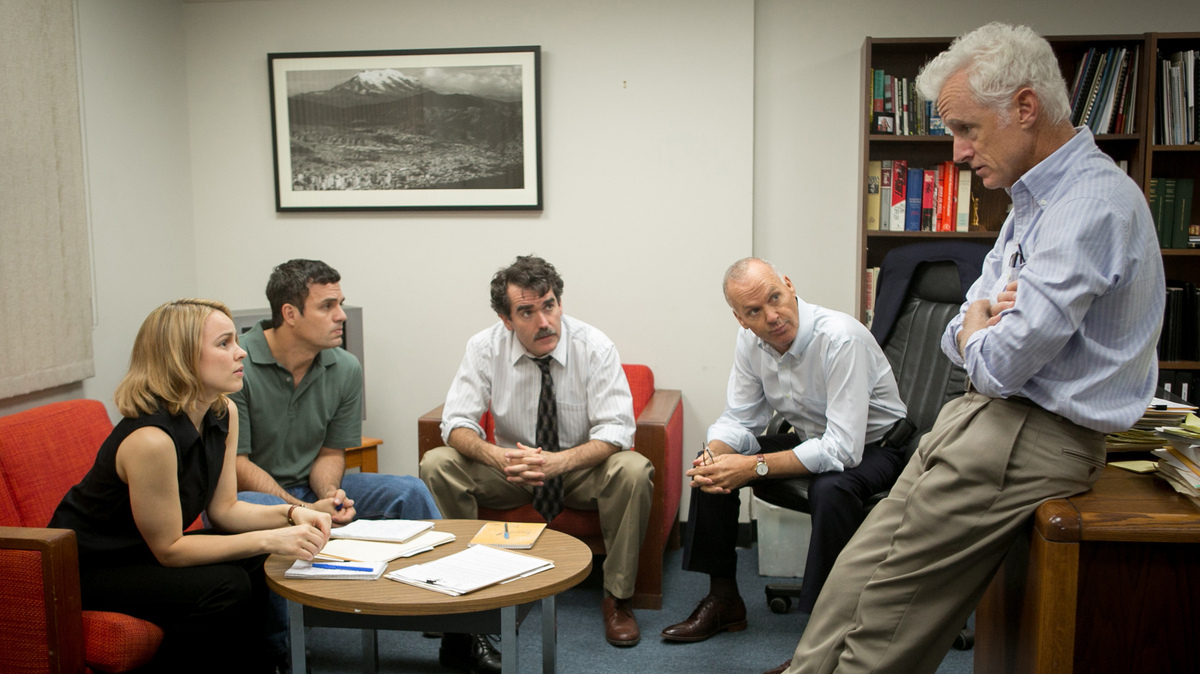 In 2001, a team of reporters at the Boston Globe began investigating reports of child sexual abuse by Catholic priests. The "Spotlight" team, as it was known, eventually revealed that the abuse had been happening for decades — and that church leaders in Boston had been aware of it and had been involved in covering it up.

Veteran reporter and editor Walter Robinson, who led the Globe's Pulitzer Prize-winning Spotlight team, tells Fresh Air's Dave Davies: "These crimes were unimaginable, and that they could've been countenanced and enabled by such an iconic institution, it gave us so much energy to pursue the story and get the story and make it public."

Now, the new film, Spotlight, chronicles the investigation that brought the scandal to light. Tom McCarthy, who co-wrote and directed the film, says he was immediately drawn to the story.

"As I dug into the material, first just on my own, and then with my co-writer Josh Singer, we realized that the story operated on so many levels. ... It went well beyond the investigation itself," McCarthy says. "It was something we were immediately engrossed in."

McCarthy describes the battle between the Globe reporters and the leaders of the Catholic Church in Boston as a case of "Goliath versus Goliath."

"This was the best the Boston Globe had, the Spotlight team was the crown jewel of that institution," McCarthy says. "All over the country there were instances [of abuse] ... but this story, this reporting, it connected the dots, and that is what sort of blew the roof off of this crisis."

On deciding to pursue the story

Walter Robinson: It got started at the very end of July 2001. The Globe got a new editor, Marty Baron, who came to us from the Miami Herald, and that's important because in Florida virtually everything is public, and Marty got to Boston and he read a column by Eileen McNamara about a case, lawsuits against a priest allegedly involved in sexual abuse, in which the court records had been sealed by a judge so the personnel records of the priest were not available publicly, and in her column Eileen had written, "The truth may never be known." And to Marty Baron, that's like waving a red flag.

So in his very first news meeting in his first day at the Globe he asked, "Has the Globe considered going to court to get these records?" And, of course, nobody had. And he immediately launched an effort to do that, and later that same day he called myself and Ben Bradlee Jr., my superior, into his office and asked me as editor of the Spotlight team to have our team begin investigating the case of this one priest, Father John Geoghan. And we set out to do that and very quickly discovered that Father Geoghan was the tip of a quite large iceberg — that there were many, many other priests, we thought perhaps 15 or 20 at the time, who had done the same thing, yet the Archdiocese had covered up their crimes by making secret settlements. Eventually, as we learned, we got it up to 70 priests, and then 90 priests, and, in the end, it turned out to be almost 250 priests in Boston who had molested children over several decades.

Robinson: I felt no resistance, nor did any of my colleagues, all of whom had also grown up Catholic. The benefit to that was that we understood the Catholic Church and how it worked and how much an important part of our lives it was when we were children and how trusting we were of the institution and the priests.

On the Catholic Church's influence in Boston

Robinson: There was always a pressure in Boston on the Globe, and every other institution, by the church. The church was the most important and politically powerful institution in Boston. As you may know, Boston is the most Catholic of the major archdioceses in the country, and the church had such power that if legislation it didn't like was before the Massachusetts Legislature, they could get it killed. And so there was always that sense that when you approach the church, you had to be very, very careful because of its power, and in this case it meant for us getting documents.

On the emotional toll of the investigation

It affected all of us emotionally and it actually helped drive us to get deeper and deeper into the story, because of this extraordinary injustice that had been done.

Robinson: It took a big toll on us emotionally. I mean, in preparing the initial stories we interviewed maybe 30 or 40 victims of abuse. We actually interviewed one or two priests, one of whom admitted to our reporter that he had abused children. And every one of these stories was emotionally wrenching for the reporter involved in it. Once the story broke open in early 2002, we received calls just in the Boston archdiocese from over 300 victims in just a month or two, and many, many of these people — all adults — who had years earlier suffered this abuse thought they were the only ones that this had ever happened to. For many of them, we were the first people they ever told that this had happened to them. ...

It affected all of us emotionally and it actually helped drive us to get deeper and deeper into the story, because of this extraordinary injustice that had been done.

On interviewing victims for the film

Tom McCarthy: It's a profoundly affecting experience, and I will say there are some interviews you go into when you're doing your research, some you're looking forward to and some you're not. And I have to be honest; I wasn't looking forward to it. They're dark waters, and it's so personal and so profoundly tragic, you really don't know what to expect, but both [the survivors we interviewed] were so courageous and forthright in sharing information, very deeply personal information. ... They really become the heartbeat of this movie, in a way.

On Robinson meeting Michael Keaton, who played him in the film 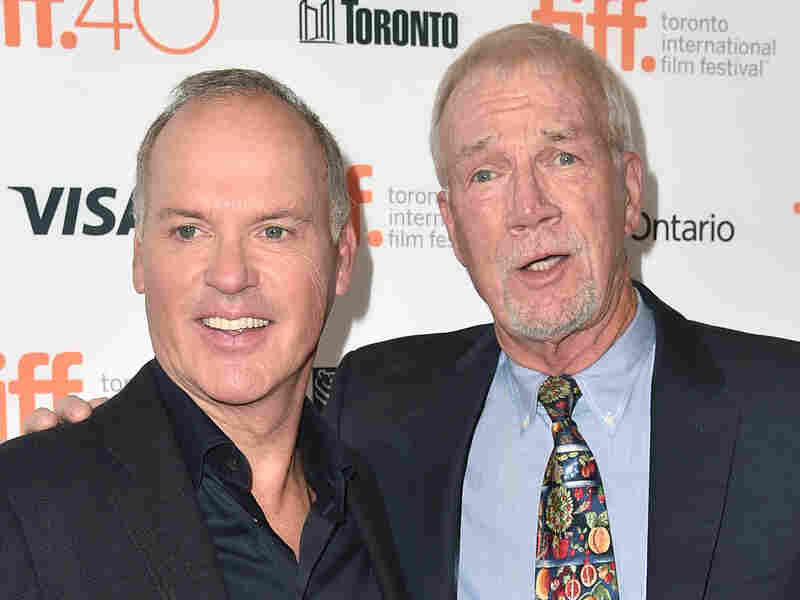 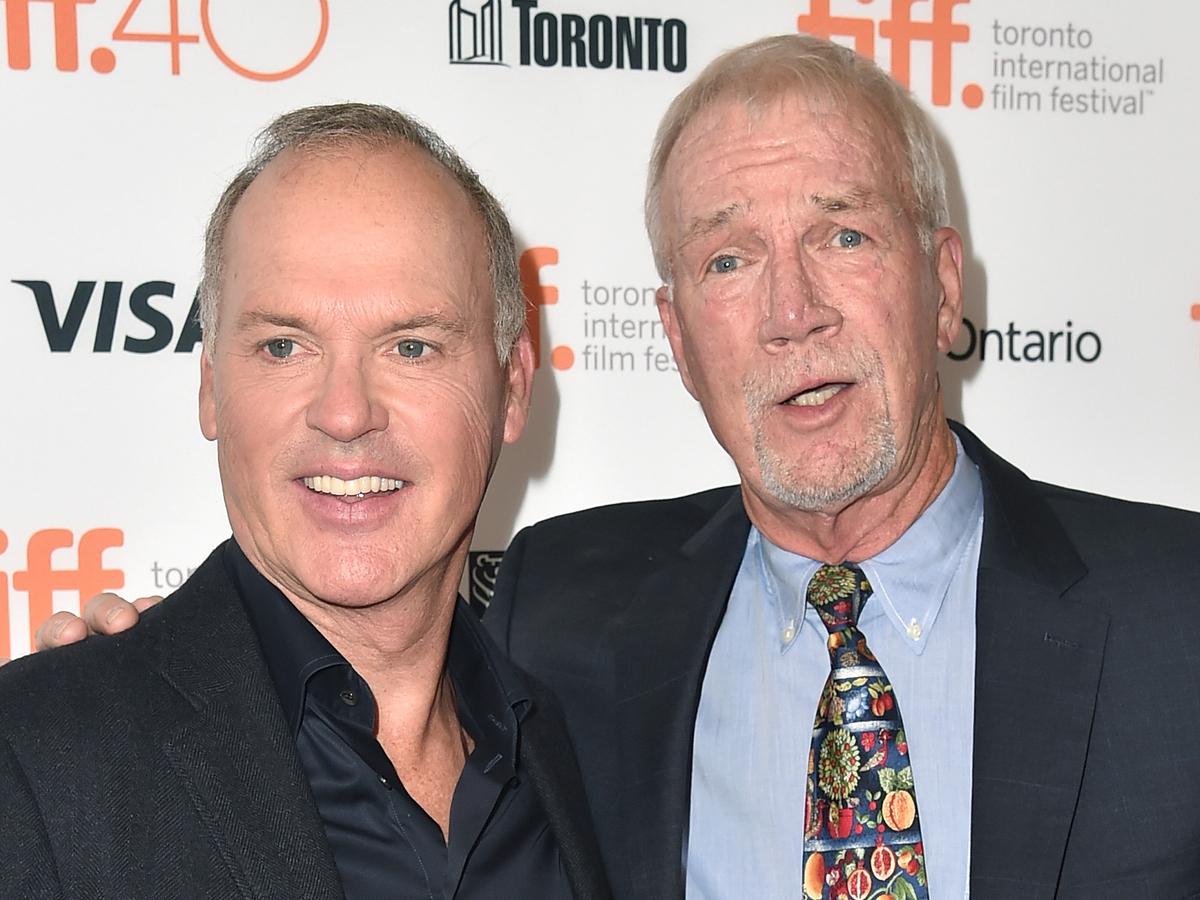 Robinson: It was a little bit of role-reversal; I'm a reporter and I'm always grilling other people, and looking at their habits and their particular mannerisms to try and take stock of them, whether I'm writing about them or not, and here I went to New York, met Michael, and found out that he had spent several weeks watching old videotapes of appearances I had made on various cable news outlets, including a couple on NPR, and that he had been studying my voice. ...

It was a very odd experience because Michael spent the entire dinner studying me, and I felt like he was watching all of my movements, and then it turns out in the film he has my mannerisms down, all my facial movements, my hand movements, he even drops his voice an octave because my voice is a little bit deeper, when he delivers lines. These actors were intent, because they were playing real people, on taking full advantage of the opportunity to get to know us and to play us as we were.

On how journalism is portrayed in the film

Robinson: Most films about journalism don't get it right. I'm just delighted, as are my colleagues, that this film just nailed it. What we actually did is so accurately and genuinely portrayed in this film, the reporting steps we took, how making the sausage isn't always a pleasant task to watch, how reporters disagree with one another, how we stumble around in the dark, how sometimes we find the most important things quite by accident. It's all there, how we make mistakes in our reporting and how we double back, but always, and certainly in this case, with the mind, "We have to get this story, and we have to get it out."

McCarthy: This is a ... great example of high-level investigative journalism, but at a local level. The Boston Globe is a local paper, this was a local story that started in the city of Boston and had national repercussions and then had global implications and is still going on today. ... Even today there's a little bit of a disconnect about how important journalism is to our society. Look, that institution, as most of us know, is in dire straits. In the last 15 years it's been brutal. Tens of thousands of reporters have lost jobs, metro dailies have been if not depleted, shuttered completely; it's tough to watch. But you see an example like this and you see the strength of this type of supported professional journalism, financially supported.