Accessibility links
Trick-or-Treating With Princesses, Superheroes And The Pope NPR's Scott Simon will head out with a princess and a goddess for Halloween. Batman, Minnie Mouse and Minions are also popular costumes. 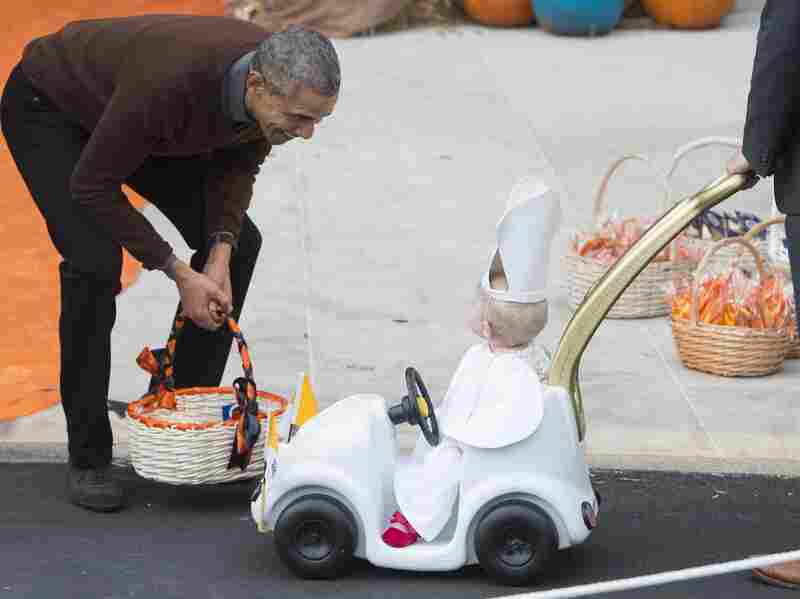 President Barack Obama greets a young child dressed as the Pope and riding in a "Popemobile" as he hands out treats to children trick-or-treating for Halloween on the South Lawn of the White House in Washington, DC. SAUL LOEB/AFP/Getty Images hide caption 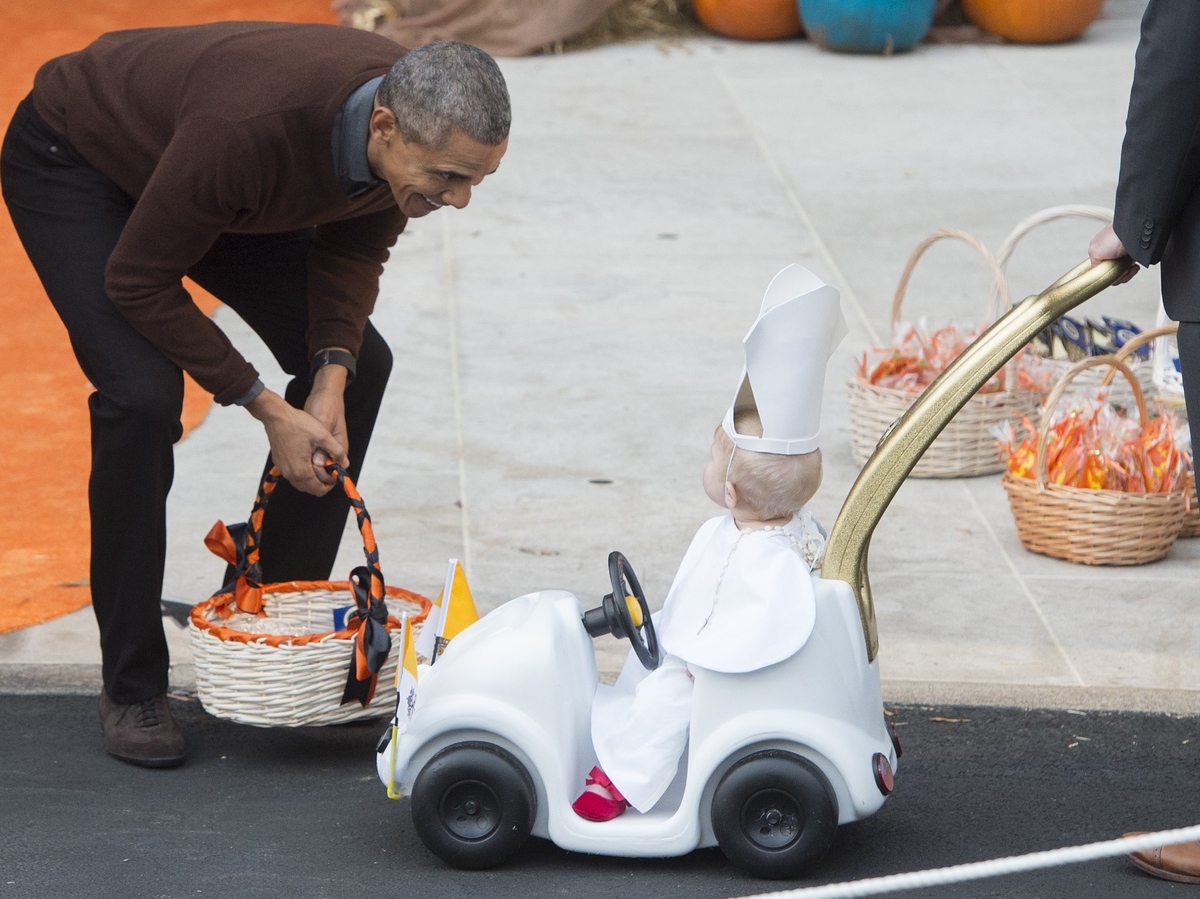 President Barack Obama greets a young child dressed as the Pope and riding in a "Popemobile" as he hands out treats to children trick-or-treating for Halloween on the South Lawn of the White House in Washington, DC.

I'd hoped to persuade my daughters to dress up as Angela Merkel and Terry Gross for Halloween tonight. But they've decided to be a goddess and a princess.

Every year or so I try to look at surveys that show which Halloween costumes are most popular. The list must reveal something about whom we revere or fear, or what or whom we'd like to pretend to be for a few hours on a Halloween night.

Google reports the top name in searches for costumes this year is Harley Quinn, Batman's adversary, and, perhaps because of that, his occasional flirtation.

The Star Wars characters are next. Batman makes the list, but back at 5. Pirates have returned to renown — ahoy! — and are up to 4 this year. Minnie Mouse is 6: on her own, without Mickey. I hope he's a supportive spouse who cheers her achievements. Witches are 7. Minions, those be-goggled little yellow guys from movies, are at 8. The Joker is 9; and Wonder Woman is 10.

I don't want to strain to see any social significance where only innocent amusement exists. You don't see many cowpokes or clowns on the sidewalks these days. You see flamboyant characters from outer space, but few human astronauts; no matter how long Captain Scott Kelly circles the earth. You don't see a lot of hobos; and I wonder if homelessness has become so rampant on the streets, it's hard to smile at little kids with cork-smudge beards playing hobos.

I imagine I'll see a few Bryce Harper, LeBron James, Abby Wambach, or Tom Brady jerseys — or little Tom Bradys, with floppy, deflated footballs tucked under their arms. But more youngsters these days seem to want to be superheroes for Halloween, not the kind of sports figures we used to call heroes.

I'm pretty confident that tonight we'll see quite a few tiny Donald Trumps in floppy orange wigs, going house to house and barging, "Trick or Treat! And give me the good stuff. Huuuge candy bars, not kale chips!" Or little white-maned Bernie Sanders, thrashing their arms. And lots of Hillary Clintons in pantsuits, spilling sheaves of printed emails marked TOP SECRET out of a candy bag.

In fact, instead of making presidential candidates meet some minimum number in the polls to be included in presidential debates, organizers should just say, "You're invited if at least ten kids dress up like you for Halloween."

So I'm delighted to go around tonight with a goddess and a princess.