Accessibility links
The Madonna Of 115th Street Gets A Long-Awaited Makeover The Blessed Mother at New York City's Our Lady of Mount Carmel Church has presided over her flock since 1884, and she's just gotten a makeover, complete with a designer gown of gold-embroidered satin. 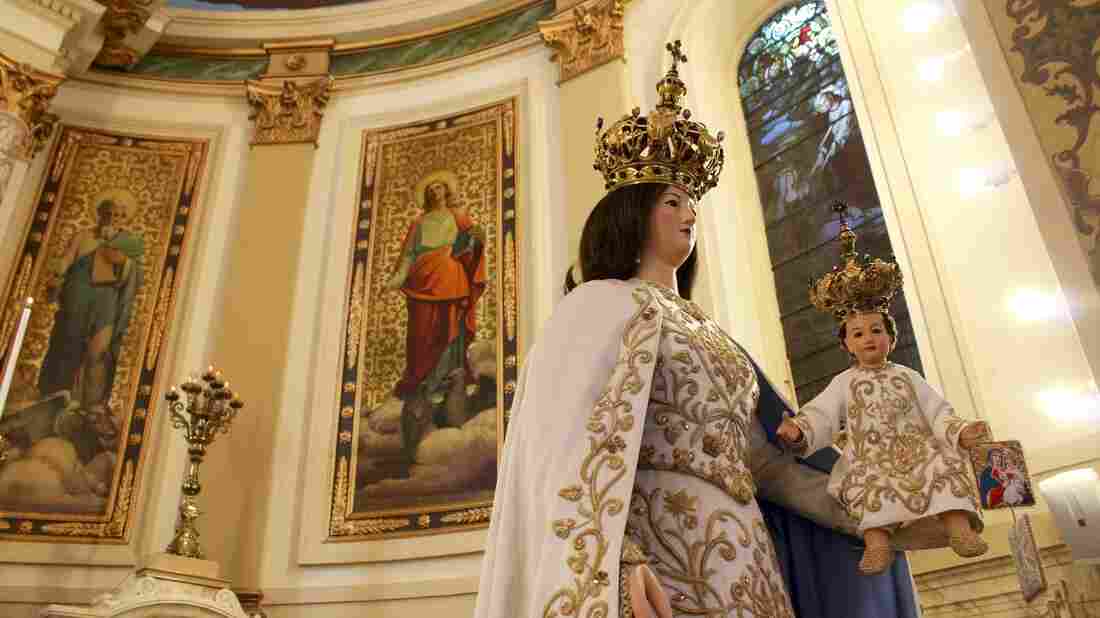 This life-sized porcelain image of the Virgin Mary was brought over from Italy in 1884. Danielle Oteri hide caption 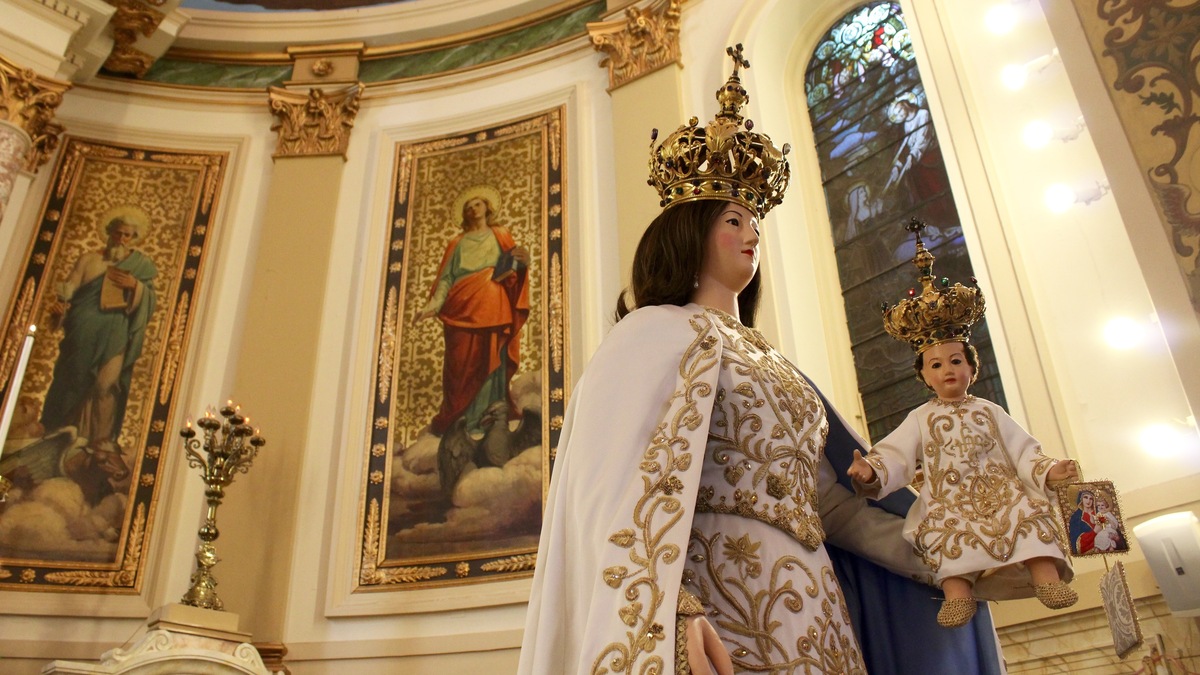 This life-sized porcelain image of the Virgin Mary was brought over from Italy in 1884.

After 131 years, Madonna of 115th Street needed a makeover — a makeover worthy of a Catholic icon parishioners say is responsible for miracles. And last week, the refurbished life-sized statue and her new gown were unveiled last week in East Harlem.

From high above the altar, the Blessed Mother at Our Lady of Mount Carmel Church has watched over her flock for more than a century. This Virgin Mary statue came over from Polla, Italy, in 1884. And according to her followers, she has healed the sick and given hope to the hopeless.

Pam Pisacano loves her. "Because she's so real, when you look at her, she's real. Her hair, her face, she looks at you as you're talking. And when you're talking, you talk to her from your heart ... And she really does grant things."

She's credited with so many miracles that Pope Pius X gave her a rare Catholic honor: He coronated her in 1904. At that time East Harlem was solidly Italian, but the Irish controlled the jobs — and the parishes.

The Irish bishops didn't like the festive way Italians worshipped, parading their icon in streets. The Irish forced the Italians to hold mass in the basement of Mount Carmel. The Blessed Mother was not allowed upstairs until 1923. 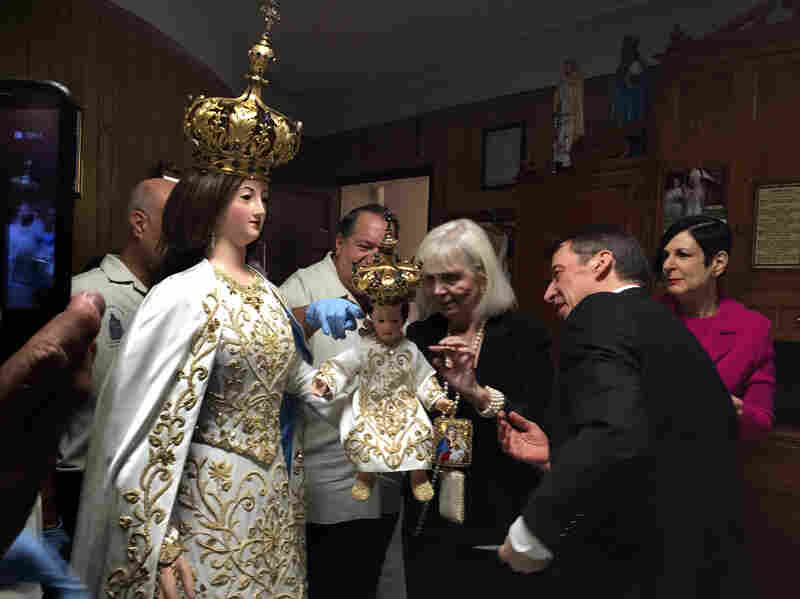 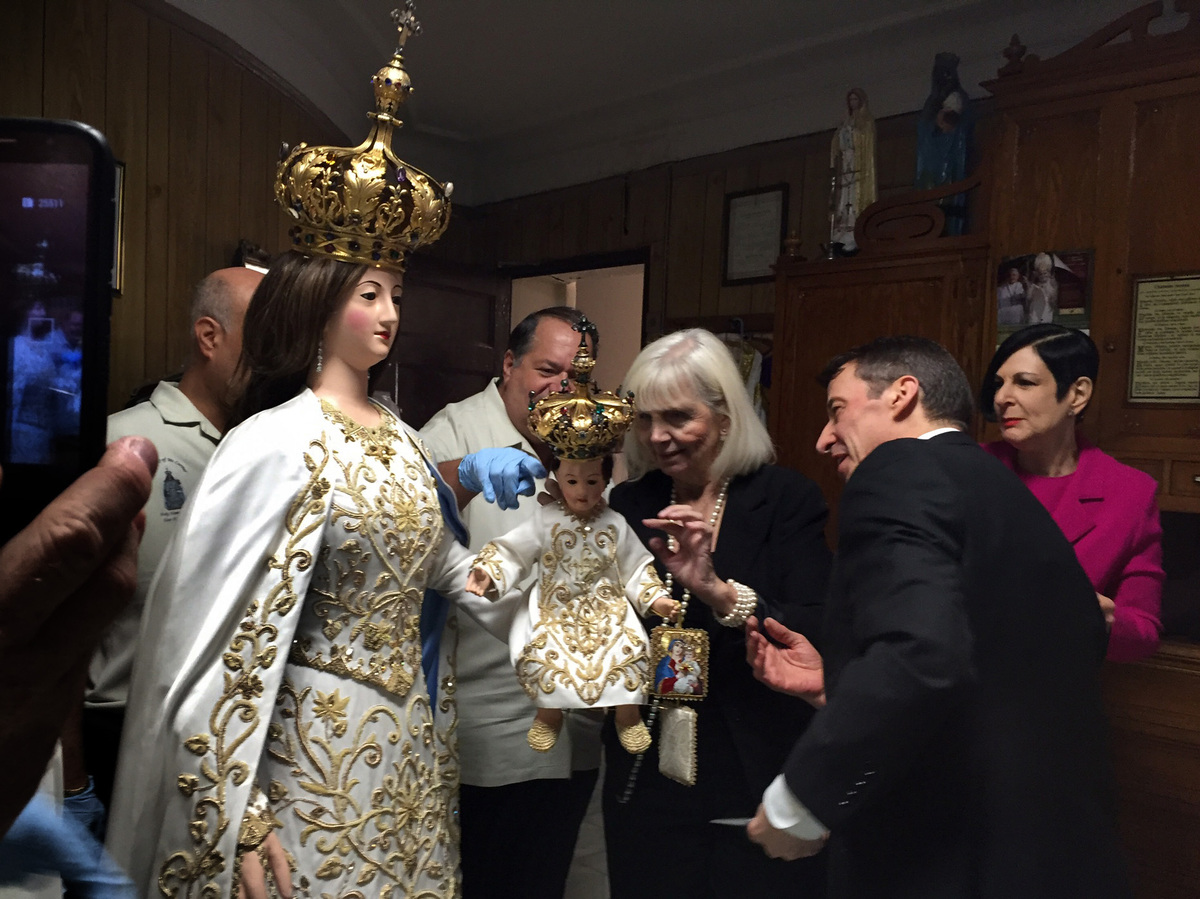 Designers Tom and Linda Platt, at right, helped make a glittering new dress for the Madonna.

Art historian Danielle Oteri says the statue's first dress was a simple brown frock. "And it was covered with the jewels that had been donated, which served as sort of a de facto savings account for the church. Nobody would steal from the Madonna herself. The dress was redone in 1954."

But the porcelain statue itself had not been repaired in 131 years. It was aging, cracking, deteriorating. A church trustee's husband lovingly did those repairs himself and fashion designers Linda and Tom Platt made her new ivory silk satin gown and cape, plus an infant dress for her Baby Jesus. Normally, a client comes for fittings to the Platts' studio.

"But they didn't want her to leave the church," Tom Platt says, "and so we had to come and take measurements. I did three, I think ... three muslin fittings for her. We came up and fitted the muslins. You know, we didn't have to think about commerciality or production in any way. It was simply a labor of love."

The church held raffles to cover expenses. The Platts donated months of labor on evenings and weekends. They sent the garments to India for intricate, hand-stitched gold beadwork and embroidery. Tom Platt made the baby booties.

"I haven't crocheted anything in years, but when I saw him, I said, well, no one would have a gown that fancy without having something on his feet!" And of course, they match the solid gold crowns mother and baby both wear.

"This crown has little jewels on it," marvels parishioner Pam Pisacano. "And the baby's crown, it's all gold and all jewels, everything is beautiful. This is all gold. Look, the baby has little gold slippers!"

I think she looks beautiful, she looks like a new bride! Her face, her hair, her clothes. I feel happy, I feel — joyful that she's back, you know?

Father Marian Wierzchowski is Our Lady of Mount Carmel's pastor. He says the Madonna's rejuvenation inspires the working-class congregants of many nationalities to refresh their own devotion. "Haitians people, Polish people, Spanish people, Italians, you know? This is not a rich Manhattan, you know, downtown. But, you know, people, they give what they can. And most important is a gift of heart."

Last weekend, the redone Madonna made her grand entrance. Father Terzo Vinci, an elderly Italian priest, celebrated the Madonna's return during the mass. "She came out of the beauty parlor, a spiritual beauty parlor, rejuvenated," he told the congregation. "Made up. New hair, I said, new face, new hands."

The crowd raised its hands in reverence all through mass. Helen Bilodeau, a church member since 1981, says the Blessed Mother means the world to her. "I think she looks beautiful, she looks like a new bride! Her face, her hair, her clothes. I feel happy, I feel — joyful that she's back, you know?"

Dozens of people pulled out their cellphones for a photograph. Our Lady of Mount Carmel simply looked on and smiled, radiant in her new outfit.