Accessibility links
Republican Campaigns Plan To Take Greater Control Over Debate Formats After a debate GOP campaigns saw as disastrous, the Republican National Committee named a new head of the debate process. But the campaigns agreed Sunday night to negotiate directly with broadcasters. 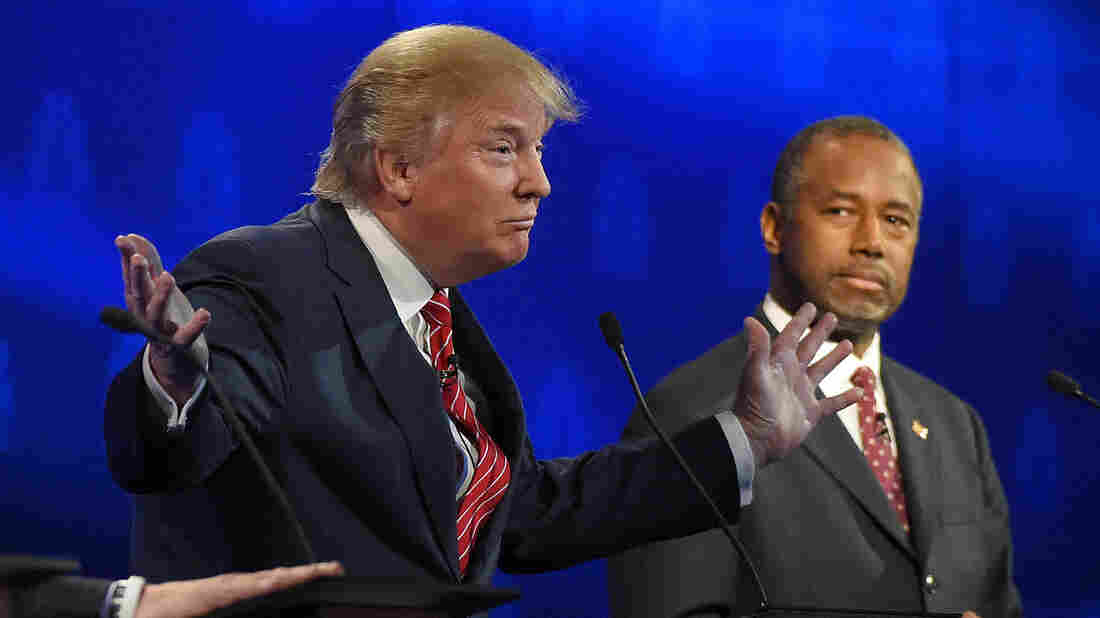 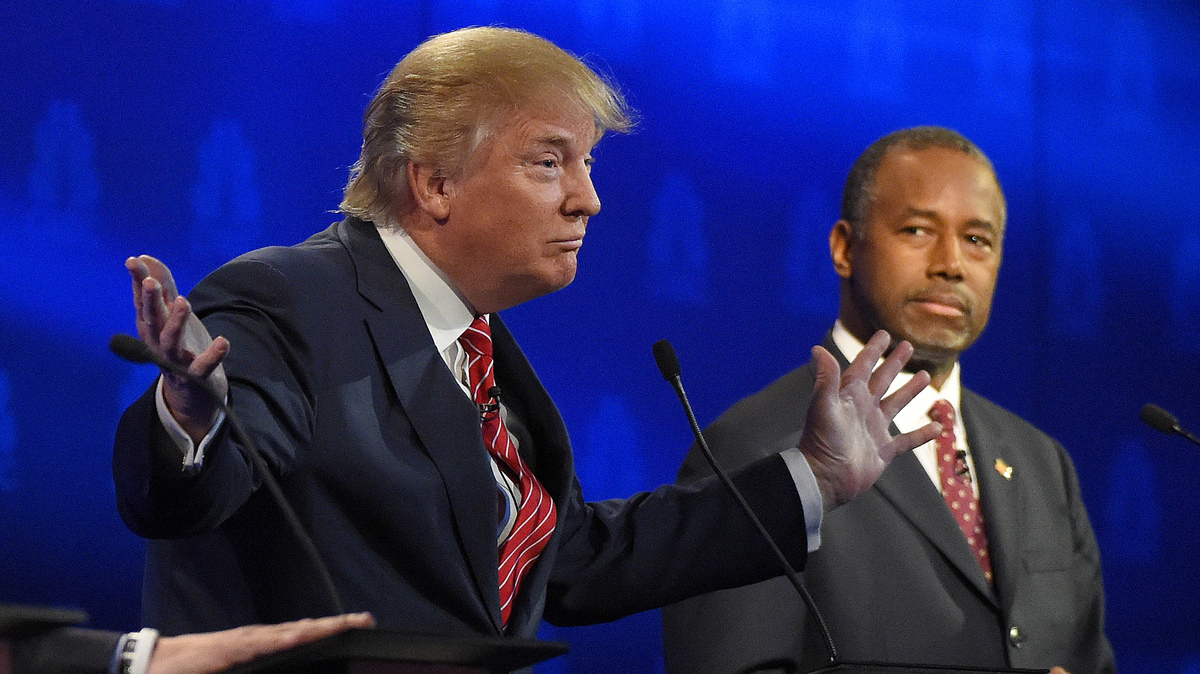 Donald Trump speaks during the CNBC Republican presidential debate Wednesday as Ben Carson looks on. The GOP candidates are pushing for changes to the debate formats.

At a private meeting Sunday night, representatives from most of the Republican presidential campaigns agreed to negotiate directly with broadcasters who are sponsoring debates, pushing the Republican National Committee out of that role.

"We're going to negotiate directly with the sponsors about format," said Barry Bennett, campaign manager for retired neurosurgeon Ben Carson, after the meeting ended in Alexandria, Va., just outside Washington. "The way it's always been done," he added, referring to the fact that the RNC claimed a central role this year, trying to avoid a repeat of the debate process in 2012, which was seen as unruly and ultimately damaging to the eventual GOP nominee, Mitt Romney.

But Bennett insisted the traditional party power structure will not be cut out completely. "They're a partner," he said. "They're just not our boss."

Instead of allowing the RNC to negotiate directly with broadcasters, Bennett said the campaigns will hold a group conference call with the broadcast sponsor before each debate to review the format. They will move forward with the debate broadcasters already sanctioned by the RNC.

"They are the sanctioning body," Bennett said, "but the format stuff is for us to negotiate."

He mentioned three elements of the format where the campaigns would have specific demands:

1. Opening and closing statements for each candidate,

2. Editorial control over biographical information displayed in graphics on screen, and

3. Equal numbers of questions for each candidate

Campaigns are also interested in discussing who will moderate debates and the types of questions that will be asked. There was some talk in the room of letting non-journalists moderate, like talk-radio hosts. It's unclear how serious that was. It's also been made clear that debates should not exceed two hours.

Bennett said the campaigns will decide on an individual basis whether to participate in any given debate. No other representatives from the campaigns spoke at length to reporters, but a top official from another campaign, who was negotiating in the room, confirmed many of the details to NPR.

Just before the meeting, the Republican National Committee named a new point person to oversee debates, an RNC official confirmed to NPR. Bennett called the move "a positive step."

A letter, to be signed by the campaigns, will be circulated in the next 48 hours to the broadcast sponsors of the remaining Republican debates. But there are still plenty of details to be worked out — and some disagreements over which outlets should be involved and not.

After the CNBC debate Wednesday, the RNC promptly suspended its Feb. 26 debate with NBC, despite the fact that both networks, while both owned by NBC Universal, have different editorial management and controls.

Further complicating matters, the NBC debate was to be co-hosted by National Review and Telemundo, the Spanish-language network. It would have been the only debate on the Republican side with a Spanish-language sponsor.

That was a flashpoint during Sunday night's campaign conversations. The Bush campaign was pushing to bring Telemundo back into the fold as a media partner, but the Trump campaign was opposed.

Bush speaks Spanish, and his wife is Mexican. He has been adamant about the GOP's need to appeal to Hispanics after the drubbing Mitt Romney took with them in 2012, winning just 27 percent of Latinos against President Obama.

Trump, on the other hand, who has been the clear leader in the GOP primary polls for more than three months, has been accused of fanning anti-immigrant flames. His controversial remarks about immigrants and his hard-line immigration plan have dismayed conservative Latinos. Trump also got into more controversy when his campaign booted Univision anchor Jorge Ramos from a news conference.

As much pressure as the RNC is under — and as much dissatisfaction the campaigns feel with how the RNC has handled negotiations and enforcement for the debates — the campaign official said RNC chairman Reince Priebus' job is not in jeopardy.

The RNC's chief of staff, Katie Walsh, wrote a letter to 14 campaigns on Sunday, as representatives from the campaigns were gathering to plot a way forward on debates.

Walsh said Sean Cairncross, the current chief operating officer of the RNC, will work with campaigns and TV networks on debate format. The contents of the letter, first reported by Politico, were confirmed to NPR.

"I know many of you have expressed some concern regarding how some of the details in the debate process have been handled to this point," Walsh wrote to the campaigns. "While we believe most of the debate details have been handled well, I want you to know that, at the RNC, we have heard your concerns and take them very seriously."

During the last GOP debate, hosted by CNBC, candidates complained about the questioning by the moderators from the debate stage, behind the scenes and afterward.

The campaigns did not invite the RNC to participate in their meeting on Sunday evening, but they did invite Ben Ginsberg, an experienced lawyer and adviser to Republican candidates. Ginsburg negotiated debate terms for the campaign of GOP nominee Mitt Romney in 2012. His involvement has caused complaints in conservative media, due to his long history with establishment Republicans.

Ginsberg told reporters that he spoke to Cairncross before the meeting, which he moderated. "I think the campaigns all want a greater degree of transparency and accountability in the way the debate process is working," Ginsberg said.

By turning to Cairncross, the RNC increases the legal and negotiating experience it brings to the debate process. The move was seen as a shakeup of sorts, as the debates were previously under the purview of Sean Spicer, the RNC's highly visible communications director and chief strategist.

"Wednesday night was a debacle," Spicer told Politico and NPR. "The RNC's No. 1 priority is to provide the best debate format for our candidates. Adding Sean in this role is how we can achieve that outcome. The candidates wanted to have another person in the room working on format and logistics. Our goal is to work with the networks to get the best outcome on behalf of our candidates. He's an experienced election attorney who has relationships with a lot of these players."